Goal of 'the right content, to the right student, at the right time' faces obstacles in widespread acceptance 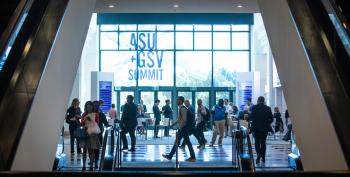 About 4,300 people are signed up to attend the three-day ASU + GSV Summit this week. Photo by Charlie Leight/ASU Now Download Full Image

The education-technology experts discussed the challenges that exist in developing technology-based tools and systems at scale. Primary to the discussion was the notion of personalization, and how K-12 and higher education institutions can implement technology without losing the personalization that is integral to successful learning outcomes.

The panel discussed how striking a balance between technology and in-person instruction was critical to achieving successful learning outcomes, but also to broadening acceptance of technological tools in the classroom. The objective of personalized learning tools, they agreed, is not to replace the instructor, but rather to support instructors by providing them the data needed to understand what their students know, where they are struggling, and then adapt accordingly.

“I have a very simple idea here, that personalization is the right content, to the right student, at the right time,” Regier said. “The challenge we have is how to reach more and more students with declining resources. The technology of the underlying system is absolutely critical. We can’t scale without the technology.

The panel discussed how the implementation of personalized technology in the classroom has been slow. Said Lockett, “Part of the challenge is that the development is happening so far away from the needs of our educators and our students, and then we wonder why adoption is so slow.”

Misconceptions about the role of education technology software, a lack of transparency from the industry and a lack of investment have hindered the widespread adoption of technological tools in the classroom, panelists said.

“There has been a profound lack of investment in K-12 R&D (research and development),” said Rose. “We are stuck in an ecosystem that can’t really generate the type of revenue that is required to develop a totally transformative experience.”

Personalized education technology has been around long enough that its efficacy has been demonstrated. The challenge, according to Gaehde, is that “the research is not getting into the hands of the decision makers. The decisions are happening at too high of a level. This doesn’t give access to people who actually need it.”

Bush reflects on the successes, regrets of his presidency during ASU + GSV keynote

Editor's note: Read more of the highlights from the ASU + GSV Summit on our blog.Former President George W. Bush said that the education reform passed during his administration, known as No Child Left Behind, was one of the most significant pieces of civil rights legislation ever approved.The bipartisan act, passed in 2002, established K-12 standards that had to be proven through assessments, wi... 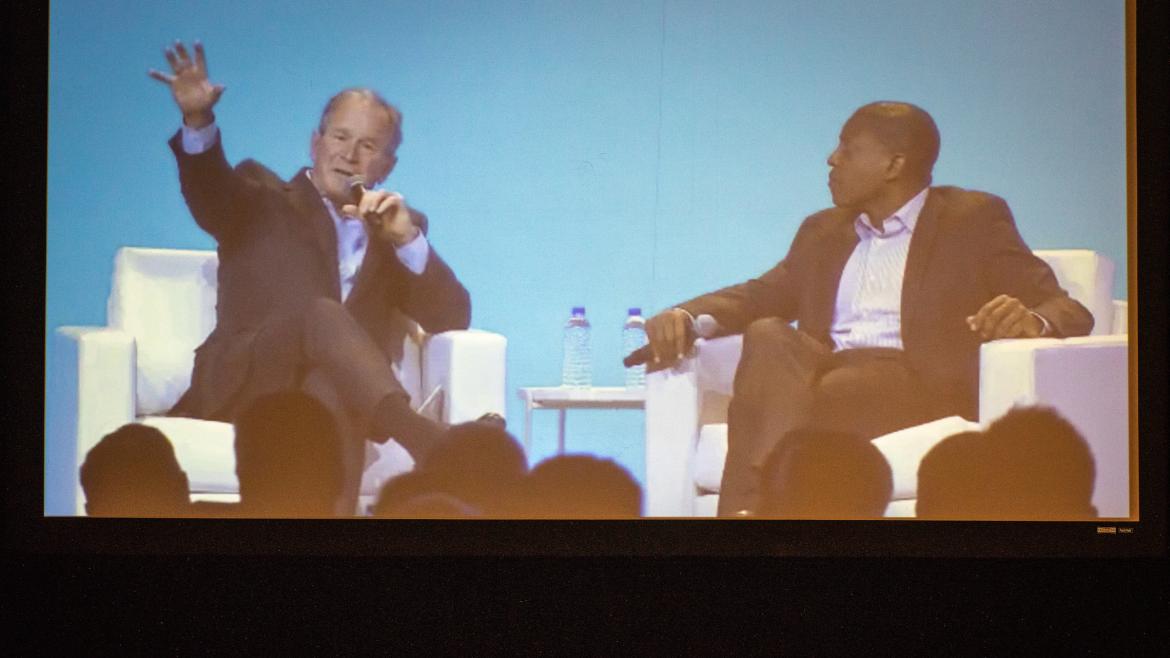 Bush reflects on the successes, regrets of his presidency during ASU + GSV keynote

Former President George W. Bush said that the education reform passed during his administration, known as No Child Left Behind, was one of the most significant pieces of civil rights legislation ever approved.

The bipartisan act, passed in 2002, established K-12 standards that had to be proven through assessments, with the results tied to federal funding.

Bush told a crowd at the ASU + GSV Summit in San Diego on Monday night that the law took “an optimistic view of people being able to learn.”

“For the first time, in return for money, people had to show results,” he said.

“A lot of times, districts that don’t measure allow kids to graduate without any sense of accomplishment, and they tend to be inner-city kids or kids whose parents don’t speak English as a first language,” he said.

“And so finally, somebody came along and said, ‘Measure.’ ”

Bush said that although the law should have been fine-tuned, it has been successful.

“Maybe there was over-testing, but I know this: For a period of time, the achievement gap started to close because of No Child Left Behind.”

The 43rd president spoke on a wide range of topics during the keynote chat.

On what he was not able to accomplish as president:

“Immigration reform. I understand that there are people willing to do work that Americans won’t do. If you go to Dallas in 104 degrees, there aren’t a lot of Americans laying tar. I proposed in 2005 that people ought to be allowed the right to earn a place in line to become a citizen over time.

“I think people were angry that the economy wasn’t growing. It started squeezing people, who said, ‘Who can I blame?’ They blamed the government. They blamed trade, and they blamed immigrants.

“People say, ‘Why aren’t you speaking out on it?’ We have citizenship ceremonies at the Bush Center. I can’t think of a better speech to give than to stand up with two Mexicans who just became citizens while wearing Marine uniforms. If somebody is willing to die for our country, we ought to say, ‘Yes, welcome.’ ”

On his hobby of painting:

“Five years ago, I was antsy. I tried to stay fit, but it wasn’t enough. I read Winston Churchill’s essay, ‘Painting as a Pastime’ and I said, ‘If that guy can paint, so can I.’

“I picked up a paintbrush and I painted a cube. It was an unbelievably liberating experience. I paint all the time.

“I published a book called ‘Portraits of Courage.’ It’s to raise money for veterans’ programs at the Bush Library. It’s the faces of 98 veterans, all of whom I’ve gotten to know through mountain biking or golf. All of whom I admire a lot.

On remembering the day of the 9/11 terrorist attacks, when he was visiting a school in Florida:

“There was a child reading to me. All of sudden the press corps in this crowded classroom was getting the same message I got.

“I had been in crises before, and the first lesson is to project calm. The second lesson is you have to say something. So I wrote a statement.

“In an instant, I became a wartime president. I made a lot of tough calls. A lot.

“Sitting in that classroom, I made a vow to protect that child, her family and the country in which she lived. That was how I conducted my presidency.”

On his mother, 92-year-old Barbara Bush, who has decided to stop treatment for chronic obstructive pulmonary disease (Editor's note: Former first lady Barbara Bush died the day after this interview):

“She’s had a spectacular life, and she does not fear death.

“I’m at peace, and the reason I’m at peace is because she’s at peace.”

Top photo: An overflow room filled with more than 500 people listen to an often-comical former President George W. Bush reminisce with Ozy Media CEO Carlos Watson during the keynote fireside chat at the ASU + GSV Summit 2018 in San Diego on Monday evening (no cameras were allowed in the main event room). The two covered a variety of subjects including No Child Left Behind — the achievement gap between the low- and high-achieving students started to close; regrets — he was not able to pass comprehensive immigration reform; and the Great Recession — "I wanted to be Roosevelt, not Hoover." Photo by Charlie Leight/ASU Now