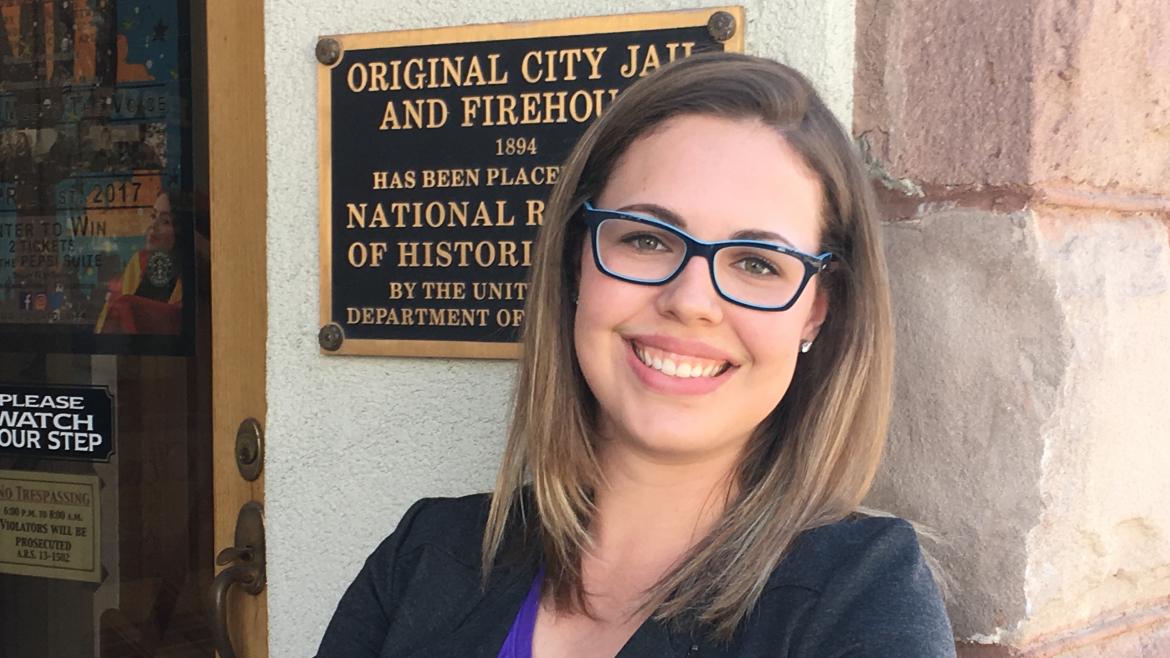 Arizona State University online student Alexa Scholl was expecting to talk to a reporter last Tuesday about qualifying as a Truman Scholar finalist.

But that’s not what happened when she logged onto a Skype call.

It was ASU President Michael M. Crow on the screen, telling her that she had just won the $30,000 scholarship.

“It was all very sneaky and I was shocked,” Scholl, a Barrett, The Honors College student majoring in political science and Spanish, said with a laugh. “Seriously, it’s nice that the president of the largest university in the nation took time to personally congratulate a student on an achievement — [it] just makes the whole ASU experience feel much more personal.”

Skype video courtesy of the Office of the President

Scholl was one of 59 college students from around the country to be named as a 2018 Truman Scholar. Some 756 candidates were nominated by 312 colleges and universities for the scholarship, which is named after Harry S. Truman, the 33rd president of the United States. Candidates were chosen by 16 independent selection panels based on finalists’ academic success and leadership accomplishments, as well as their likelihood of becoming public service leaders.

Many who know Scholl say the scholarship is well-deserved.

“This accomplishment is a reflection of Alexa’s hard work, courage and commitment to public service,” said Kyle Mox, associate dean of Barrett, The Honors College. “The Truman Scholarship awards great people, the sort of people you hope become the next generation of leaders in this country.”

To that end, Scholl is off to a running start. In November 2017, she was elected to the Prescott City Council with the highest number of votes of all the candidates; she is the youngest known member to hold the office and the youngest current councilmember in Arizona. But Scholl very much can hold her own on the dais, according to Prescott Mayor Greg Mengarelli.

"I know there was some skeptimism in town regarding Alexa's age, but that was born out of thinking of her as a 'normal' 20-year-old," Mengarelli said. "Alexa is wise beyond her years in terms of maturity and intellect. She's always asking the right questions and getting the correct answers. It has been nothing but a great pleasure to serve with her."

Scholl is also a Tillman Scholar at ASU and the co-founder and president of Political Literates, an on-campus organization that aims to fight political apathy by delivering political information in an easy-to-understand and unbiased way.

“I serve on the Prescott City Council because I want other young people to feel as if they can trust government,” said Scholl, who also works for a Prescott-based law firm preparing documents. “It’s important that this generation feels like their interests are represented and that we can help shape the future.”

“Alexa is an only child, and her father and I drug her along to many board and community meetings,” Read said. “The fact that we are related to George Read, a founding father who signed the Declaration of Independence, also sparked Alexa’s interest in government and politics.”

After Scholl completes her undergraduate degree in December and completes her four-year term on the city council, she will attend law school to pursue a career in municipal law and continue to engage citizens in local government.

“In my view, local government is the best form of government there is,” she said. “It’s accessible and affects everyone’s daily lives. It’s important for people to know what’s going on and who their elected officials are.”

Editor's note: Read more of the highlights from the ASU + GSV Summit on our blog.Monday at the ASU + GSV Summit, author Liza Mundy gave the audience a history lesson tied to her book “Code Girls: The Untold Story of the American Women Code Breakers of World War II.” A partial transcript follows:"World War II was a time when the freedom of democracy hung in the balance, and diversity and a will... 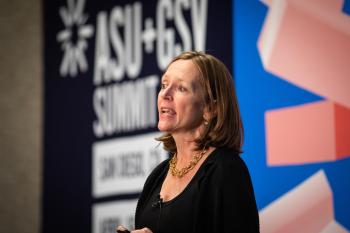 Author Liza Mundy speaks about the role of women in coded communications at the ASU+GSV Summit 2018 in San Diego on Monday. Mundy’s book, "Code Girls: The Untold Story of the American Women Code Breakers of World War II," shares the story of college women and teachers being recruited for the clandestine work. Photo by Charlie Leight/ASU Now Download Full Image

"World War II was a time when the freedom of democracy hung in the balance, and diversity and a willingness to be inclusive was truly a reason we won World War II.

"Much of our tech industry was born during World War II. It was really women doing that work because the men were doing the fighting.

"Goucher College was a women’s college founded in the 19th century when people thought higher education for women was a bad thing. It was a rigorous institution, but there was enormous pressure on the women to get married. One of the women from Goucher was Jackie Jenkins, mother of Bill Nye the Science Guy, so you get a sense of her intellectual chops.

"She had been tapped by the U.S. Navy and spent weekends being ushered into an arcane field called cryptanalysisCryptanalysis is the study of ciphertext, ciphers and cryptosystems in order to understand how they work and find ways to defeat them.. She was one of thousands.

"Everything took place over the radio waves using Morse code. We had to figure out how to break those. Americans had led code-breaking responsibility for the Pacific Ocean.

"A bureaucrat in the U.S. Navy literally typed in a memo: “New source: women’s colleges.”

"They (female candidates) were asked two questions: “Do you like crossword puzzles?” and “Are you engaged to be married?” If they said yes and no (respectively), they were recruited.

"The Army sent their handsomest soldiers to do the recruitment because they thought these women would be susceptible to the charms of a young man and that’s why they would take this work. They were so wrongheaded about why an educated woman would want a way to do work.

"Thousands of schoolteachers from the South learned the geography of Asia and the code systems of the ships supplying the Japanese army, spread out on islands all around the Pacific. They were trained to read an encrypted message, and they were doing an early form of hacking.

"There was an African-American unit breaking the code of the private sector. They were also former teachers. Just as banks and companies do today, encrypting all their financial info before sending it out on the internet, banks and companies were doing that in World War II. They were figuring out who was doing business with Hitler or Mitsubishi.

"I interviewed 20 women for the book and have heard from many more. They had to do complicated math to strip out the encryption. The intelligence would go out to American submarine commanders waiting on the horizon.

"We sank thousand and thousands of Japanese ships. Most Japanese army deaths were from starvation and disease because they weren’t getting supplies.

"When they learned that their efforts led to a convoy being sunk, these women felt pure satisfaction. Later in their lives they had more complicated feelings about the lethal intelligence work they were part of.

"They made an incredible contribution to the end of World War II. Our willingness to innovate, and be diverse when freedom hung in the balance, was a central reason we won World War II."