Adolescence is a time when biological changes in the body happen faster than psychological changes, a mismatch that creates challenges for teenagers that can lead to problem behaviors, depression or even substance abuse. 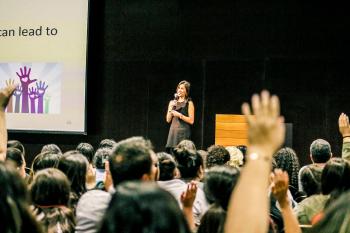 “We learn as developmental psychologists that early romantic relationships carry forward into later, more committed relationships such as marriage, but this idea is just starting to be tested,” Ha said. “What if the social and emotional skills necessary for happy and healthy relationships later in life are actually learned in these adolescent relationships?”

Ha leads the @HEART lab and uses techniques from developmental psychology, social psychology and cognitive neuroscience with the goal of collecting subjective and objective measures about the quality of the romantic relationship. The use of multidisciplinary methods is important, because almost all teenagers who complete surveys about their romantic relationships report being really happy, even though they might not actually be in a healthy relationship. The @HEART lab researchers observe and videotape couples as they work through a conflict, deliver surveys over a long timeframe to couples, measure levels of stress hormones in saliva and measure electrical activity in the brains of couples.

“The most difficult part about this research is keeping up with the teenagers,” Ha said. “Recruiting is challenging because by the time participants are enrolled and scheduled for a study, they might have already broken up!”

In the lab, participating couples might argue or have conversations about jealousy while the researchers videotape the session. The researchers then use the video to identify what emotions each participant displayed, based on their facial expressions, posture and tone of voice, what they talked about, and whether they were supportive to each other.

“These momentary assessments give us insight into how the relationship functions in real life,” Ha said.

Participants receive the text message survey questions about twice a week for three months. The response rate is high, even after participants are no longer in the romantic relationship. Once teenagers begin a study, Ha said they are very committed participants.

Ha’s research is basic science, but community outreach is also an important part of her work. She recently spoke at the ASU Hispanic Mother-Daughter Program, where she told the mothers, fathers, and teenagers in the audience about the significance of adolescent relationships relative to mental health and school performance and the importance of keeping lines of communication open.

Next year, Ha will collaborate with the Tucson Unified School District to study how teenagers navigate relationships in general, not just romantic relationships, and whether those with healthier relationships perform better in school.

The idea of ASU as the New American University resonates with Ha, who is the oldest child of Vietnamese refugees to the Netherlands and a first-generation college student. When she started college, Ha had no idea what academia was, and a career in science seemed beyond her reach. She credits her mentors at Radboud University Nijmegen in the Netherlands, who supported her and helped her navigate graduate school. Ha earned two master’s degrees in developmental psychology and her doctorate from the university before coming to ASU as a postdoctoral researcher in 2013. Ha first worked in the T. Denny School of Family and Social Dynamics and the Institute for Interdisciplinary Salivary Bioscience Research before joining the Department of Psychology in fall 2017. 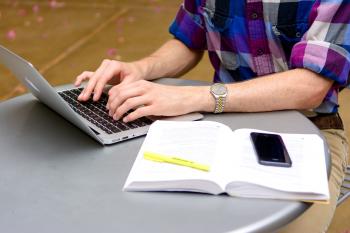 The study looked at return on investment of digital learning in full immersion and blended digital immersion scenarios. It finds that when colleges and universities take a strategic approach to digital learning and invest in the design and development of high quality courses and programs, they can achieve three critical objectives. These include: higher retention and graduation rates and quicker matriculation for students who took at least some portion of their degree program online; increases in the total volume of student enrollment; and increases in the proportion of specific populations including Pell Grant-eligible students, older students and female students.

“We are now seeing how scaled digital learning environments circumnavigate barriers of time and space, decrease time to completion amidst a radical demographic shift, and provide pathways for unprecedented program completion,” said Lou Pugliese, managing director and senior education fellow at EdPlus. “The maturity of digital technologies has given way to new design methods that now allow institutions to more effectively address the unique set of specific learner needs in order to sustain in their academic journey.”

Findings from the study offer an understanding of how each institution adopted successful digital learning approaches and what impact they had. Based upon a review of the six case studies, some promising best practices are suggested:

The Action Lab researchers are working on a number of other projects such as creating models to measure online student learning beyond grades.  The focus is on using observed student performance and behavioral data captured within ASU’s learning management system (e.g., exam grades, log data on whether a student clicked on a video, discussion group analysis, etc.) to dynamically estimate student learning in relation to the course objectives and associated program outcomes, explains Action Lab Senior Research Associate, Phil Arcuria.

This information could then be used by a variety of stakeholders, from students and faculty members to instructional designers and program directors to understand better student learning related to course and program objectives.

Another study in progress is looking at the removal of remedial math as a stepping stone course to MAT 117:College Algebra for online and campus immersion students at ASU. Instead, learners are placed directly into MAT 117 that now features ALEKS adaptive technology.

Action Lab Research Associate Jim Cunningham is studying: Whether ALEKS is effective in producing mastery of math concepts in college algebra; how are remedial students faring in the new system; what is the relationship between mastery in ALEKS, performance on the math final and the final grade in the math course and; and how well ALEKS prepares students for success in the next major steps in math, pre-calculus and calculus.

David Weissman serves as Senior Director of Communications for EdPlus.  He can be reached at davidweissman@asu.edu.