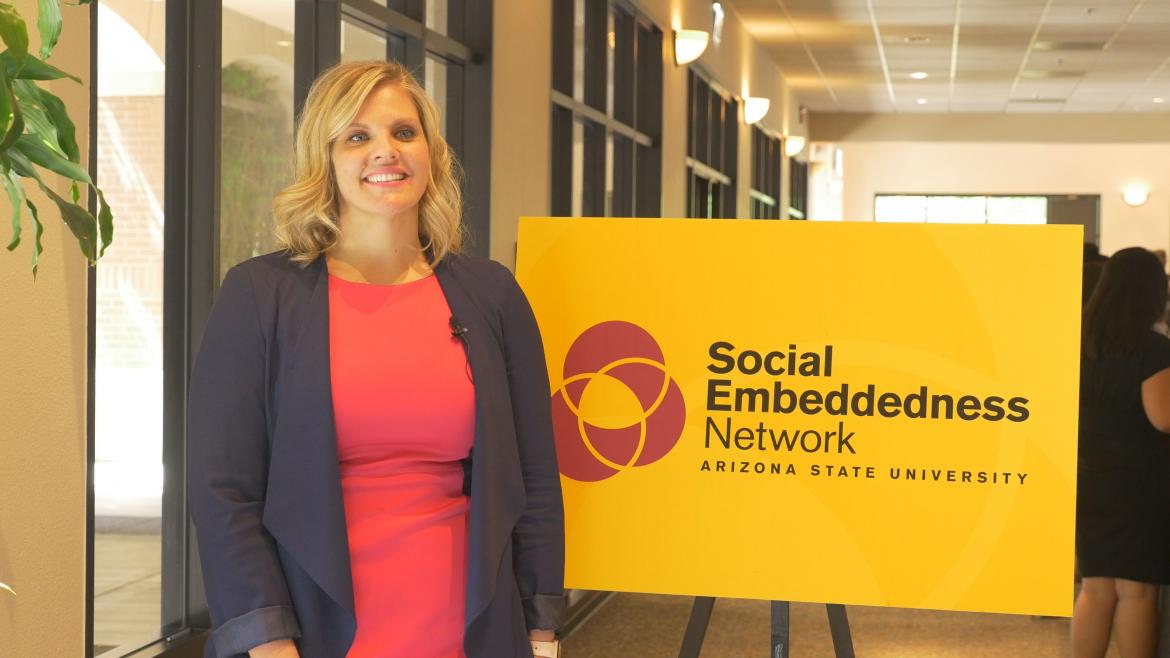 Part of the mission of Arizona State University is to enhance its local impact and social embeddedness, and one of the best ways to achieve that is to connect people.

ASU's Office of University Initiatives this year expanded and scaled its outreach luncheon with the inaugural Social Embeddedness Network Conference, which aimed to include and support engaged faculty and staff working in domains of community engagement.

At the event, held Friday, April 6, at ASU's West campus, participants engaged in a variety of breakout sessions and workshops designed to coalesce their network, shared strategies for forging meaningful and mutually beneficial partnerships with the community, and generated institutional dialogue about how to advance socially embedded research, teaching, student development and practice at ASU.

ASU Now spoke to Lindsey Beagley, director of social embeddedness for University Initiatives, about the goals of the conference, some takeaways and how faculty and staff can get involved in the embeddedness effort.

Question: What is the Social Embeddedness Network?

Answer: The Social Embeddedness Network is a collective of faculty and staff at ASU who are engaged in partnerships with community organizations within their scholarship, practice or teaching. In whatever capacity they may be partnering, these are faculty and staff who have a special set of competencies, knowledge and experience about how to effectively bridge the gap between ASU and the community, but in way that is mindful of the different environment, priorities and resources with which our partners may be operating.

The Network is a platform for these engaged faculty and staff to exchange best practices and lessons learned across disciplines. It’s very likely some of them are working with the same partners or in the same communities and don’t know it. They may be working on the same social challenges, but through different disciplinary lenses. Because social embeddedness doesn’t live in any one place at ASU, there are plenty of reasons to connect across silos.

Q: How did the conference get started?

A: The event started in 2014 as a joint effort between Access ASU and University Initiatives to connect those who were working on K–12 initiatives across ASU. Since that time, the annual Social Embeddedness survey has illuminated a number of other types of community-engaged efforts that would benefit from being connected across silos, and so we have been steadily growing the scope of the event to be inclusive of all social embeddedness activity.

Q: What topics were discussed at the conference?

A: The breakout sessions covered a variety of topics that represented shared experiences among community-engaged faculty and staff regardless of the disciplinary context, such as: tribal perspectives of partnerships with ASU, balancing the community impact with student learning outcomes in community-based learning experiences, participatory budgeting, building an ethical framework for equity-centered partnerships, and thinking about the future of a socially embedded ASU.

We enjoyed a phenomenal keynote which was a fireside chat between Gabriel Shaibi of the College of Nursing and Health Innovation and his community partner Shannon Clancy of the Society of St. Vincent de Paul. They shared the tensions and opportunities that partnering represented for each of them in their distinct roles as a scholar and a social services provider.

Q: Who attended the conference?

A: Nearly 200 people attended from over 70 distinct academic and non-academic units throughout ASU.

We would like to figure out how we can expand the event to include our community partners to join in these conversations next year.

Q: What opportunities are there to get plugged into the Social Embeddedness Network going forward?

Catching up with the Affordable Care Act

With the midterm elections just months away, the issue of health care is once again a topic of conversation in the halls of Congress, in boardrooms and at dinner tables across the country. To understand where the Affordable Care Act stands today and what consequences the November election may bring, ASU Now spoke with Swapna Reddy, clinical assistant professor in the College of Health Solutions.Qu... 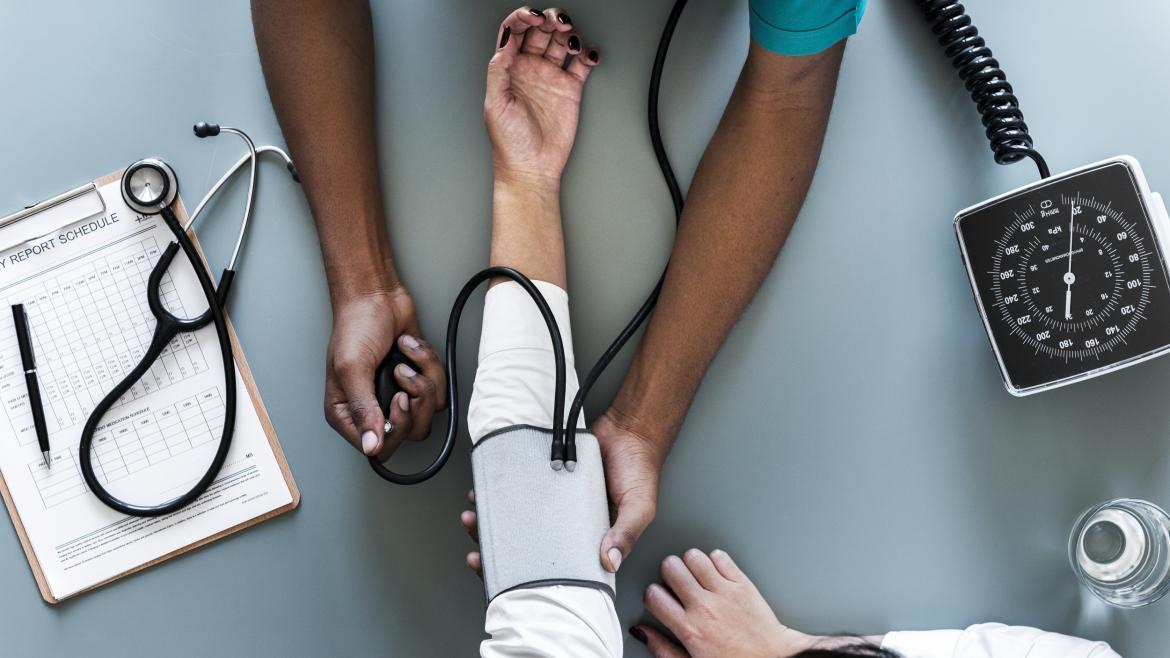 Catching up with the Affordable Care Act

With the midterm elections just months away, the issue of health care is once again a topic of conversation in the halls of Congress, in boardrooms and at dinner tables across the country. To understand where the Affordable Care Act stands today and what consequences the November election may bring, ASU Now spoke with Swapna Reddy, clinical assistant professor in the College of Health Solutions.

Question: What happened to the Affordable Care Act (ACA)? Where does it currently stand?

Answer: Despite unsuccessful efforts by many members of the Republican majority in Congress and President Trump to repeal and replace the landmark legislation in 2017, the Affordable Care Act (sometimes referred to as "Obamacare") is still the law of the land. Around 8.8 million people signed up for 2018 coverage through Healthcare.gov, despite reductions to enrollment periods and a 90 percent cut to funding for dedicated advertising.

That being said, the ACA has had a few important setbacks, and their implications can be quite serious for those that depend on ACA-based coverage for their health care.

Q: Is the individual mandate gone? 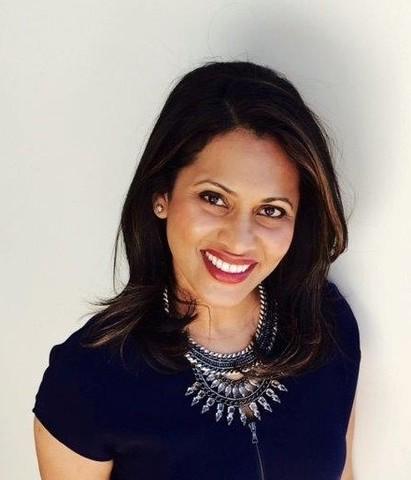 A: A primary example is the current state of the ACA's individual mandate, which requires most Americans have a minimum level of health insurance coverage. Failure to do so resulted in a tax penalty, or fine. On Dec. 22, 2017, President Trump signed into law a sweeping tax bill, which included a provision eradicating the penalties for not having coverage; in essence, it removed the enforcement abilities of the individual mandate. There is a common misconception that this eradication went into effect at the signing of the bill; however, the individual mandate's tax penalty for noncompliance still stands in 2018 and will go into effect in 2019.

While the vast majority of Americans receive health coverage through their employer or a public health insurance program, those that do not have access or ability to pay for an employer's program and make too much to qualify for public programs like Medicaid have come to depend heavily on the ACA's individual insurance markets for coverage. A primary purpose of the individual mandate was to help stabilize insurance risk pools and markets so that not only (frequently) sick or high-utilizers of health care were covered, but also so the risk would be shared among healthier consumers as well. This would also have the effect of stabilizing premiums for all those covered through the markets.

Q: What can we expect to see happen this year with the marketplaces?

Experts predict a general premium increase of 10 percent in the markets due to this change in the law. Many marketplace enrollees, almost three-quarters in Arizona, qualify for federal subsidies to help pay for premiums, which help to mute these spikes in cost. Nevertheless, fluctuations in policy at the federal level regarding subsidies threaten this safeguard as well, especially for the working poor.

This is also dangerous for the healthier individuals who choose to exit the marketplaces in favor of less expensive and bare-bones plans, especially in the event they develop a health issue that requires coverage that their plan does not provide, or provides at increased rates. Experts at the Congressional Budget Office predict that ultimately, repealing the individual mandate's penalty will result in 13 million fewer insured Americans by 2027, compared to the number of insured currently under the ACA.

A: Arizona's ACA marketplace was once among the most robust in the country. At the onset of 2017, many insurers fled the state's exchange, leaving many counties with only one insurance option. Resulting spikes in premiums made national headlines, though with the help of federal subsidies and what appears to be a financial correction, rates have stabilized. Nevertheless, Arizona witnessed a 15 percent decrease in enrollment on Healthcare.gov in 2018 compared to 2017.

Q: How might the November elections change the health care debate?

A: The midterm elections in November have the potential to have a tremendous impact on the fate of the ACA. There is a wide spectrum of approaches by candidates on how to address ACA-related challenges, such as high premiums. While it feels like a distinctly partisan issue, it is important to recognize that there are candidates from both parties that favor stabilizing the ACA — some in an effort to maintain and expand the reach of the legislation, and others in an attempt to stabilize premiums, especially for coverage that many in their constituencies have come to depend heavily upon. While there is still some talk of repeal and replace, that has become a less popular sentiment among candidates based on the legislative failures of 2017.

Increasingly, public support for repeal and replace is losing popularity. A recent poll by Kaiser Health found a slight increase in the share of the public who say they have a favorable view of the ACA, from 50 percent in January 2018 to 54 percent this month. This is the highest level of favorability of the ACA measured in more than 80 Kaiser Health Tracking Polls since 2010.

As is evidenced by outrage in town halls across the United States in 2017, Americans have become accustomed to and dependent on key ACA provisions, such as not being discriminated against for pre-existing conditions. Nevertheless, they remain fiercely pro-individual rights to make decisions about their health care and resistant to rising costs and premiums. As such, candidates on both sides will have to toe the line carefully on their ACA-related policy positions. With so much hanging in the balance and so many people's lives (literally) on the line, this election season is particularly relevant.