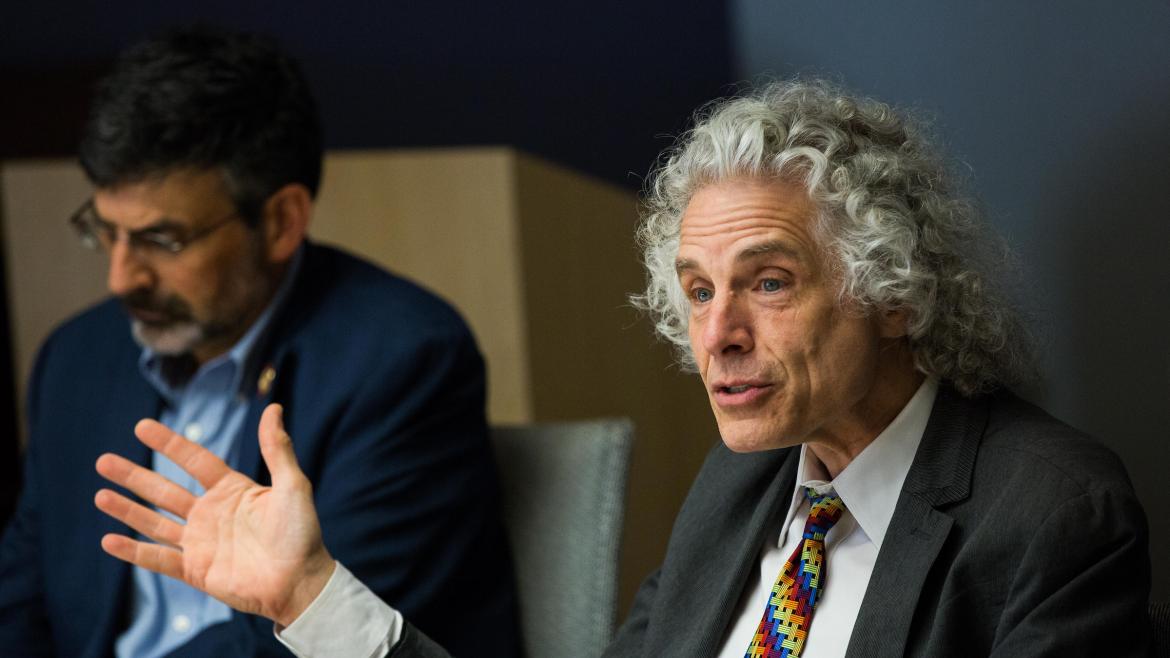 Steven Pinker has a message for all those standing at the ready, poised to raise the doomsday alarm at a moment’s notice: Not so fast.

In his new book, “Enlightenment Now” (which Bill Gates has declared his “favorite book of all time”), the Harvard professor of psychology uses social science data to make the argument that we are actually living in the most peaceful, progressive time in human history.

On Wednesday afternoon, Pinker fielded questions from a group of about 30 ASU students in an open discussion on the Tempe campus that included such topics as religion, politics and technology.

“Almost anything that you measure when it comes to human well-being has increased over time,” Pinker told students, citing life expectancy, general health, time for leisure, rates of literacy and access to food, among other measures.

Over the course of the academic year, the series featured such speakers as fellow social psychologist Jonathan Haidt, Middlebury College Professor of international politics and economics Allison Stanger and University of Chicago law Professor Geoffrey Stone, who all spoke on the urgent need to embrace free speech and diverse thought on college campuses and in society in general.

“It’s been a terrific yearlong series,” said Paul Carrese, School of Civic and Economic Thought and Leadership professor and founding director. “We’ve welcomed well over 3,000 people to these events since September … and we’ve had a wide range of views represented by people from multiple disciplines and life experiences.

“We’re delighted to have [Pinker] as the final, cleanup hitter.”

The first question lobbed at Pinker during the afternoon discussion was no softball — "What role do you feel religion plays in humanity’s future?" — and he held nothing back when he swung at it.

“I don’t think there’s a role for belief in a deity,” because there’s no evidence of one existing, he said.

The belief in gods, souls and spirits does nothing to enhance humanity, Pinker argued. Instead, holding out for an afterlife only serves to devalue our lives on Earth. And though he conceded that many religions nowadays have become more humanistic and social justice-oriented, the belief in a benevolent, omnipotent being can lead to inaction on issues like climate change (if the understanding is that said being would never let humans suffer as the Earth withers away) and dangerous misinterpretations of perceived sacred texts.

“If we want to make humans better off, we have to do it ourselves,” Pinker said. “Prayers aren’t going to do it. … That’s why I think humanism combined with science and reason is the most moral set of beliefs.”

When it came to that other most-avoided topic of polite conversation — politics — Pinker’s stance was just as firm.

“We’d be better off if policy questions were not treated as matters of tribal loyalty,” he said. “There are an awful lot of scientists who take a more global approach to [political issues] — we could use more of them. … Decoupling particular ideas from political ideologies is absolutely essential” to progress.

Pinker referenced the chapter on reason in “Enlightenment Now,” in which he addresses the scientific community’s complaint that many people reject scientific findings because of a lack of education.

“The actual studies on why that happens show that [the stances people take on certain issues are] simply identity badges for belonging to a particular ideological tribe,” he said. “On average, people who advocate for climate change don’t know any more science than those who deny it.”

“It was interesting to hear how different threats, or perceived threats, can affect political attitudes,” she said.

Pinker left students with the notion that just because some things may appear to be in dire straits, it does not mean all hope is lost.

“It’s a misunderstanding of progress to think that everything always has to get better. That would be magic.” Instead, he said, “If we apply knowledge, science and reason to the goal of making people better off, we can succeed. And we have succeeded.”

Top photo: Steven Pinker answers questions about his books and his thoughts on free speech and human progress during a Q&A session with students, faculty and staff on the Tempe campus Wednesday afternoon. Photo by Deanna Dent/ASU Now

A convening with meaning

Art isn’t always about entertaining the masses and making people feel good — it can also be used as a powerful tool for social justice and cultural change.That’s what “The CounterAct Convening,” an ASU-led grass-roots effort to deploy multidisciplinary artists to foster dialogue and address the national challenge of sexual assault and violence through cultural solutions, was all about.Ti... A convening with meaning

Art isn’t always about entertaining the masses and making people feel good — it can also be used as a powerful tool for social justice and cultural change.

That’s what “The CounterAct Convening,” an ASU-led grass-roots effort to deploy multidisciplinary artists to foster dialogue and address the national challenge of sexual assault and violence through cultural solutions, was all about.

Timed to kick off Sexual Assault Awareness Month, the Convening is part of the CounterAct initiative, which aims to spur 880 artistic acts to counter the 880 acts of sexual violence that occur each day in the United States. The pilot program debuted April 4 at ASU’s Memorial Union on the Tempe campus and is intended as a national model.

“One of the most powerful things the arts can do is make the invisible visible,” said Steven J. Tepper, the dean of the Herberger Institute for Design and the Arts, which is helping to coordinate the campus-wide effort. “The arts have incredible capacity to interrogate our world in a way to see things we didn’t see before.”

Tepper called the initiative a “bold experiment and an urgent issue” where artists can offer ideas, talent and solutions to prevent and counteract sexual violence.

“Collectively, we think we can shift the culture,” Tepper said.

Ikeda told the audience that she was raped several years ago a few days before Valentine’s Day — a day that, for many survivors, is an anniversary of sexual assault and violence.

“I came of age how most girls become women — through violence,” said Ikeda, who said she suffered through years of turmoil and nightmares and at times contemplated ending her life. She said she began to heal when she wrote herself a love letter three years ago, which she called a “radical act of self-love” and was the genesis of #SurvivorLoveLetter.

Ikeda said her art has become a healing balm that she has applied to all areas of her life — but she still has her bad days.

“I still wake up with fear, depression and rage,” Ikeda said. “But when we do emerge and rise from the ashes, we come back more beautiful and walk with more purpose in our art.” 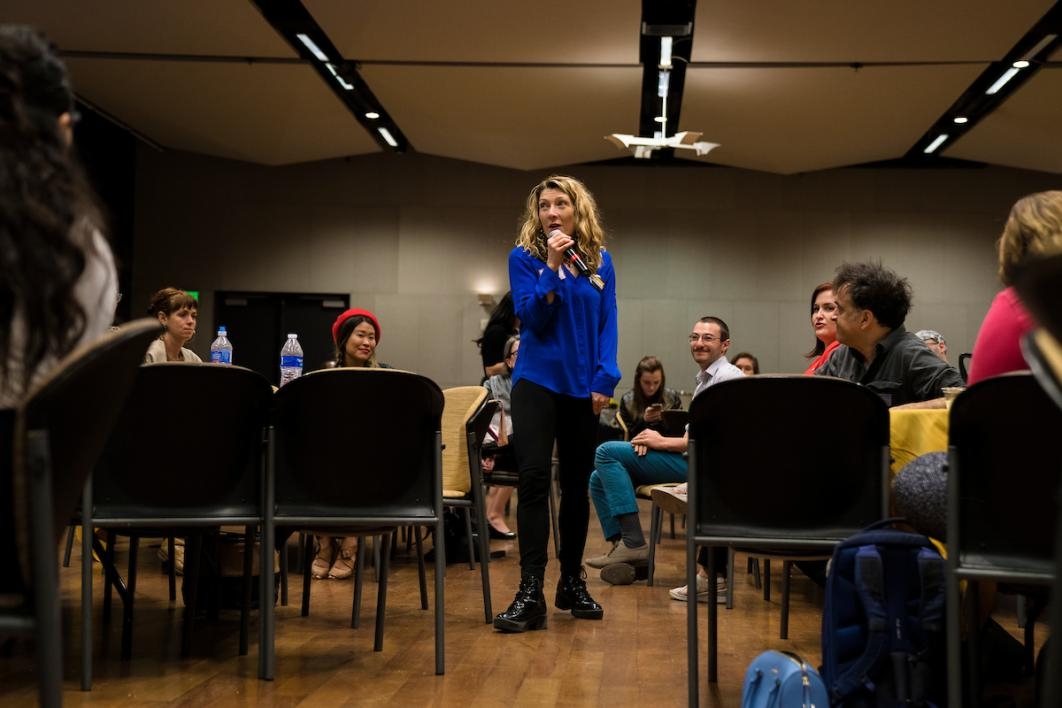 Elizabeth Johnson, co-creative director of the CounterAct initiative, introduces Tani Ikeda and her video project at Wednesday's CounterAct Convening in the Memorial Union on ASU's Tempe campus. The initiative aims to inspire 880 creative actions that will counter the 880 acts of sexual violence that occur every day in the United States. Workshop leader Phil Weaver-Stoez asks a question at the CounterAct Convening on Wednesday. The event drew about 150 people to the Memorial Union on the ASU Tempe campus. 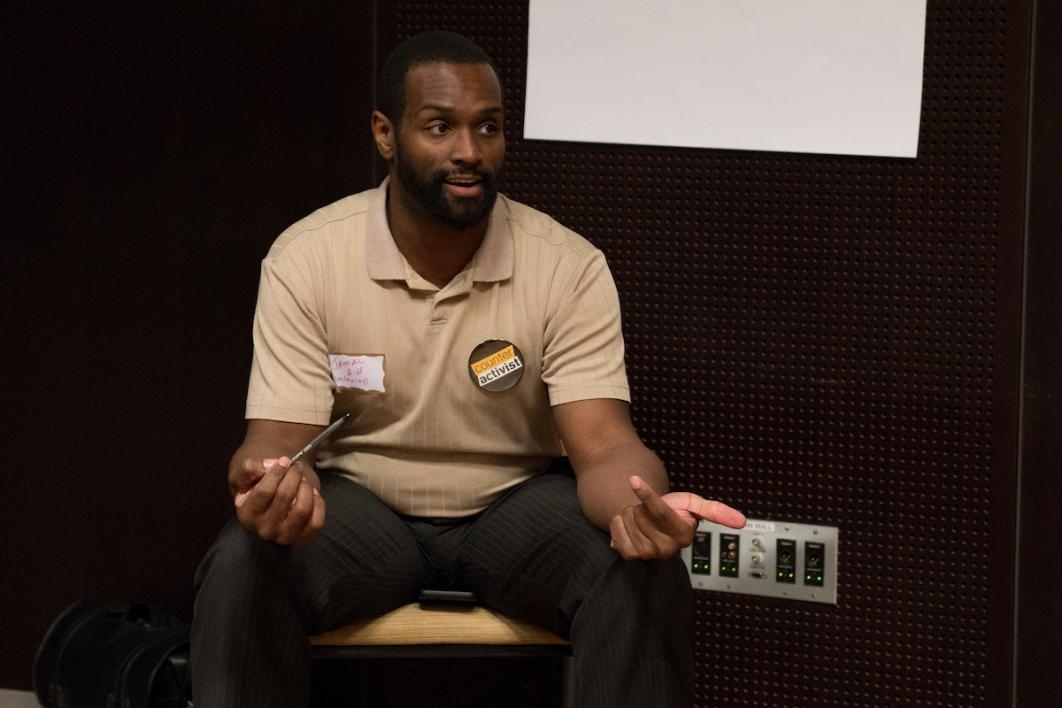 Cronkite Professor of Practice Retha Hill leads a workshop at the CounterAct Convening on Wednesday. Hill will help create an app for Alexa on sexual violence and assault.

Nik Zaleski, co-creative director of CounterAct, said participants of the initiative will be eligible for a seed-grant program supporting creative actions. The actions, she said, will vary in size from creating a Facebook meme on sexual violence to an app for Alexa to a yearlong salon series hosted by several artists.

“These cultural problems demand cultural solutions,” said Zaleski, who is a civic practice theater artist rooted in Chicago. “ASU is a leader in innovation, and what’s more innovative than centering creative practices to address this problem on a national scale?”

Freshman Djuan Porter, a theater major in ASU's School of Film, Dance and Theatre, said he attended the Wednesday event because he “fell in love with the mission of CounterAct.”

“I will take some sort of action because it’s for the betterment of society,” said Porter, who said he’ll most likely gear his creative action in the direction of the LGBTQ community. “I’ve always been a person who’s cared about other people.”

CounterAct is planning a large-scale multimedia dance for April 2019. The dance will include 880 intergenerational survivors and will weave together past and present learning and knowledge. For more information, visit the CounterAct website. To apply for a CounterAct seed grant, visit here.