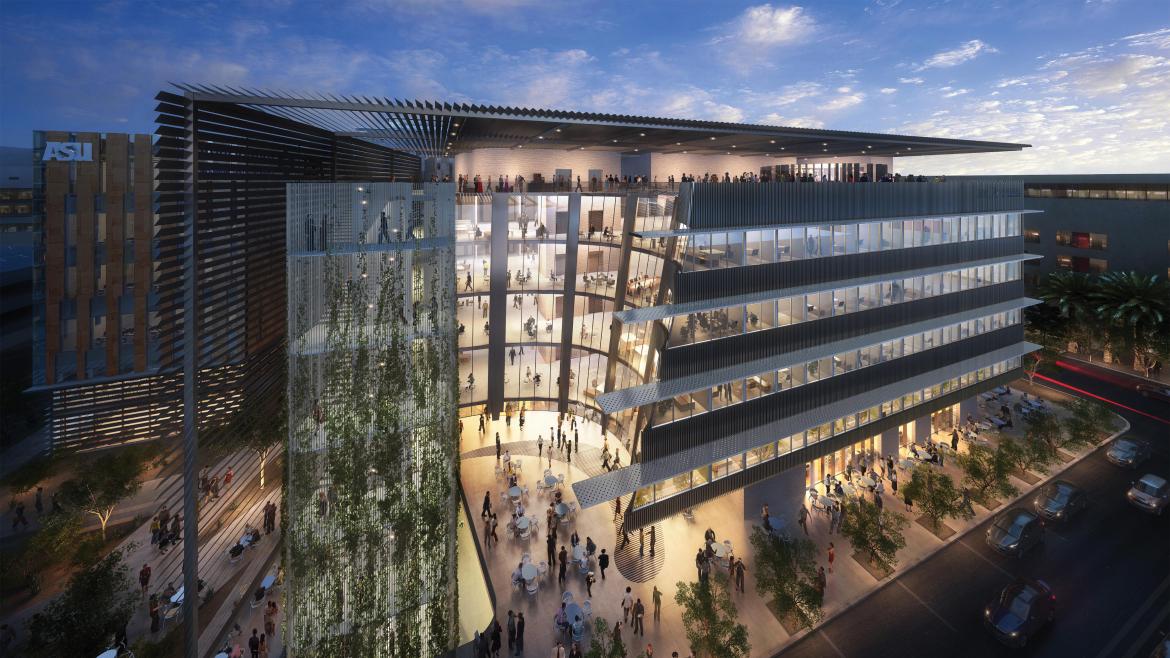 Sanjeev Khagram will bring his most innovative programs, continue school mission to bring peace through commerce

Arizona State University has appointed Sanjeev Khagram, a world-renowned expert in global leadership, the international political economy, sustainable development and the data revolution, as the next director-general and dean of Thunderbird School of Global Management.

“Sanjeev is a transdisciplinary thinker who will reinforce Thunderbird’s traditional areas of global management and leadership,” said Mark Searle, executive vice president and university provost at ASU. “His scholarship on globalization, transnationalism, sustainable development and human security make him a natural fit to take the reins at a revitalized Thunderbird School.”

Khagram will follow Allen Morrison as the head of the school; Morrison has chosen to return to teaching and research starting this summer.

Khagram previously has held faculty positions at the Harvard Business School and Kennedy School of Government, and the University of Washington where he was the founding director of the Lindenberg Center for International Development. He completed his undergraduate, master's and doctoral degrees from Stanford University in economics, development studies, engineering and political economy. He is currently the John Parke Young Professor of Global Political Economy, Diplomacy and World Affairs at Occidental College.

Khagram envisions Thunderbird as intensely focused on its founding mission to bring peace to the world through commerce.

“We will renew, deepen and broaden our commitment to training and empowering current and future executives of international enterprises and networks of all kinds,” Khagram said. “In today’s world, a new era of global leadership is certainly needed in the private sector. But it also is in desperately short supply in government agencies and international organizations.”

Khagram has identified three areas in which he believes the Thunderbird School can take the lead in educating students from around the world: the global and transnational nature of the world, the cross-sectoral nature of the world, and the importance of entrepreneurship and innovation to comprehensive economic advancement.

“It’s at the intersection of these three pieces, linked to our mission of helping to create a world in which there is cooperation and peace and understanding and respect,” he said. “That’s really the combination that we have to figure out and innovate with in order for Thunderbird and ASU to realize their full potential.”

He has several times left higher education to establish and lead major global startups. He will bring one of his most innovative programs to ASU and Thunderbird: his Global Cities and Sustainable Development Initiative, which focuses on advancing economic, social and environmental progress in major urban centers around the world.

Khagram will join the board of directors of the Julie Ann Wrigley Global Institute of Sustainability, and he will play a leadership role in the future of Thunderbird’s executive education programs.

In addition, Searle has appointed Khagram a Foundation Professor of Global Leadership, asked him to form an ASU-wide Global Leadership Council, and asked for his guidance envisioning new opportunities for ASU’s locations in Washington, D.C., and Los Angeles.

Morrison, who will remain on the faculty, was lauded by Searle as the right leader for the right moment at Thunderbird.

“Allen’s leadership helped to save Thunderbird at a time of great institutional uncertainty,” Searle said. “He has been tireless in his commitment to instilling in Thunderbird the confidence it needed after a difficult few years. The excitement in Thunderbird’s future is owed in large part to Allen’s efforts.”

Morrison was hired to lead Thunderbird while it was transitioning from a struggling independent graduate school into a component of the ASU Knowledge Enterprise.

Morrison will continue to oversee the school until the end of June. Khagram will take over as dean on July 1.

The Mindfulness Community at Arizona State University hosted the M2 Mobile Mindfulness Studio on March 22 as part of the Graduate and Professional Student Association's Grad Week in an effort to help students de-stress in the midst of midterms and to introduce them to the importance of mindfulness practice.

The M2 Mobile Mindfulness Studio is cross between a food truck and a meditation studio. The truck is simple, meant to offer a calming space to focus the mind free from outside distractions. Low-seated chairs face the front of the truck where the session leader can sit and guide attendees through their mindfulness practice. 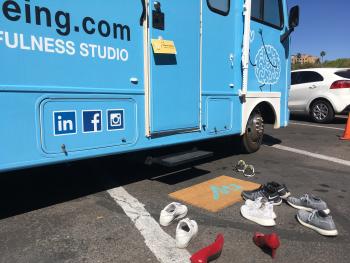 The M2 Mobile Mindfulness truck made its first college campus visit to ASU in Tempe on March 22. Download Full Image

“As odd as it is, the idea [for the studio] came to me while driving past a food truck after getting my hair done,” said Susan West, founder of the M2 Mobile Mindfulness Studio. “I thought, ‘I could put a mindfulness studio in a truck.’ So I did.”

The M2 mobile studio launched in January, making the ASU event one of its inaugural trips. Additionally, this was the studio’s debut on a college campus. It attracted around 100 students across eight hosted meditation sessions.

“One of the main goals of our group is to build a community of contemplative students at ASU, and I saw this opportunity to collaborate with Susan as a unique way to work toward that goal,” said Jason Papenfuss, president and board member of the Mindfulness Community at ASU.

“We provide a safe, unintimidating space for students to learn the practice of mindfulness during their lunch hour,” said Tamara Rounds, a clinical associate professor in ASU's School of Social Work who currently serves as the faculty adviser for the Mindfulness Community at ASU.

“I think that is one of the beauties of this particular collaboration because the community-building efforts we are interested in are really catalyzed by the uniqueness of this venue,” Papenfuss said.

In addition to hosting the M2 Studio, the Mindfulness Community also offered a workshop on nonviolent communication earlier this year and has plans to conduct a three-course silent meal in April.

Mindfulness has many proven health and wellness benefits such as reducing stress and improving self-awareness, memory, attention, immunity and sleep.

“There is tons of research on mindfulness that has to do with de-stressing and regulating, so [mindfulness] is really the perfect fit for students who are over-stressed to come and use the space to decompress,” Rounds said. 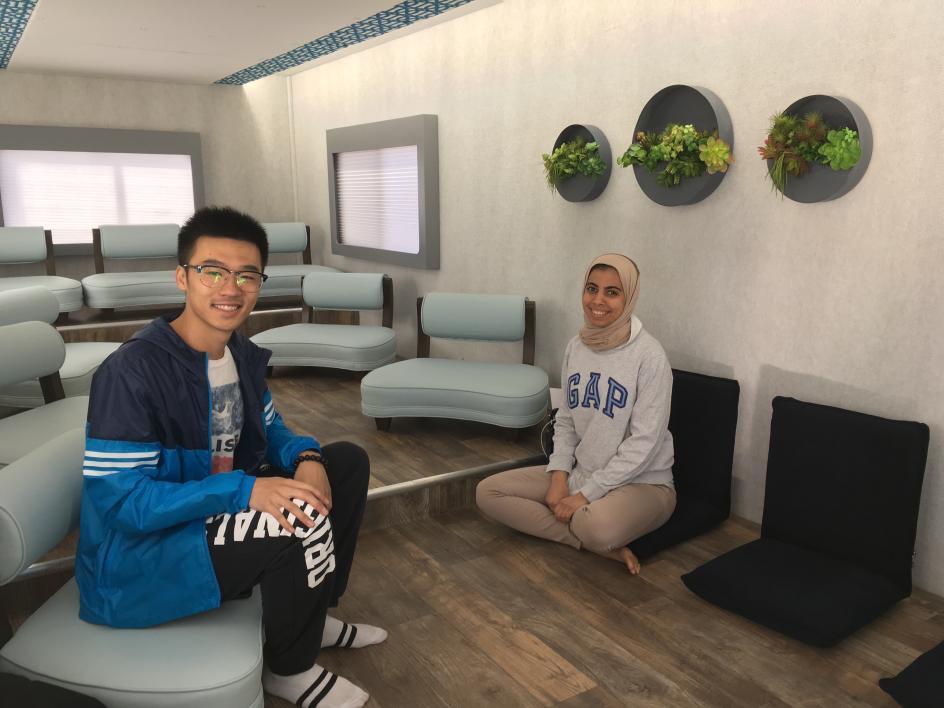 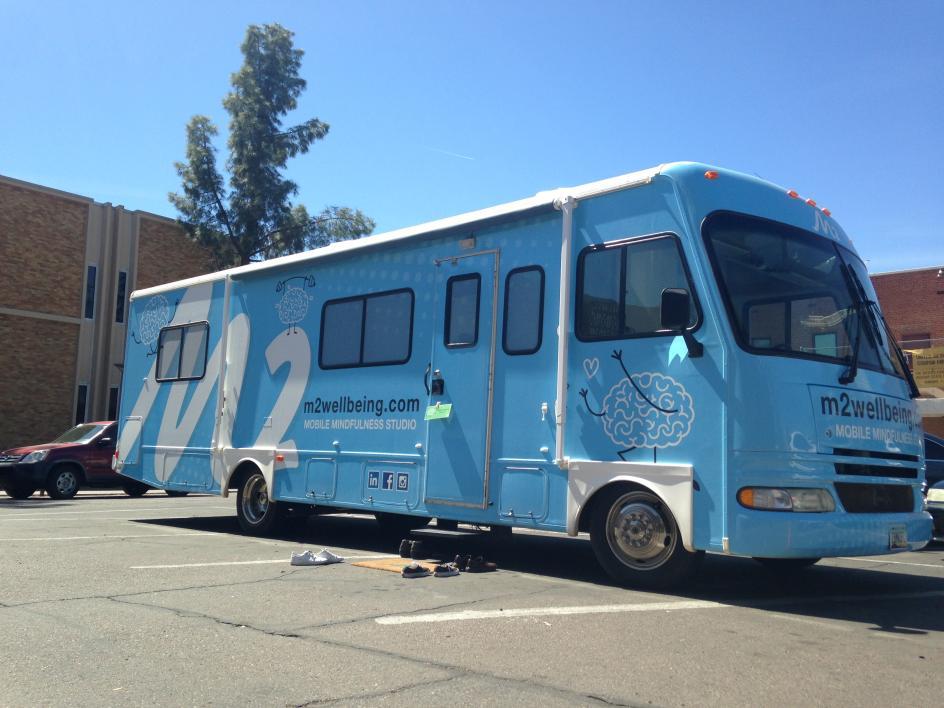 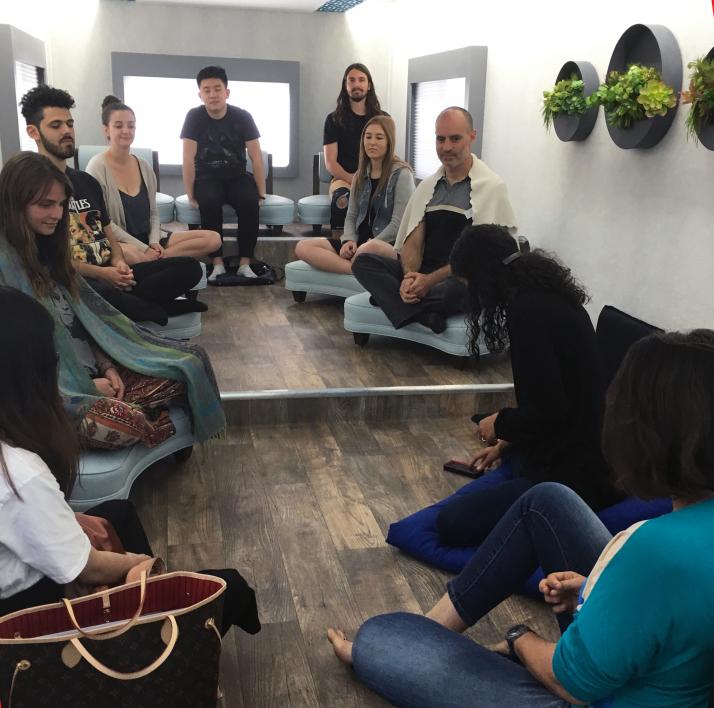 A mindfulness session helps students on the Tempe campus de-stress in the midst of mid-terms.