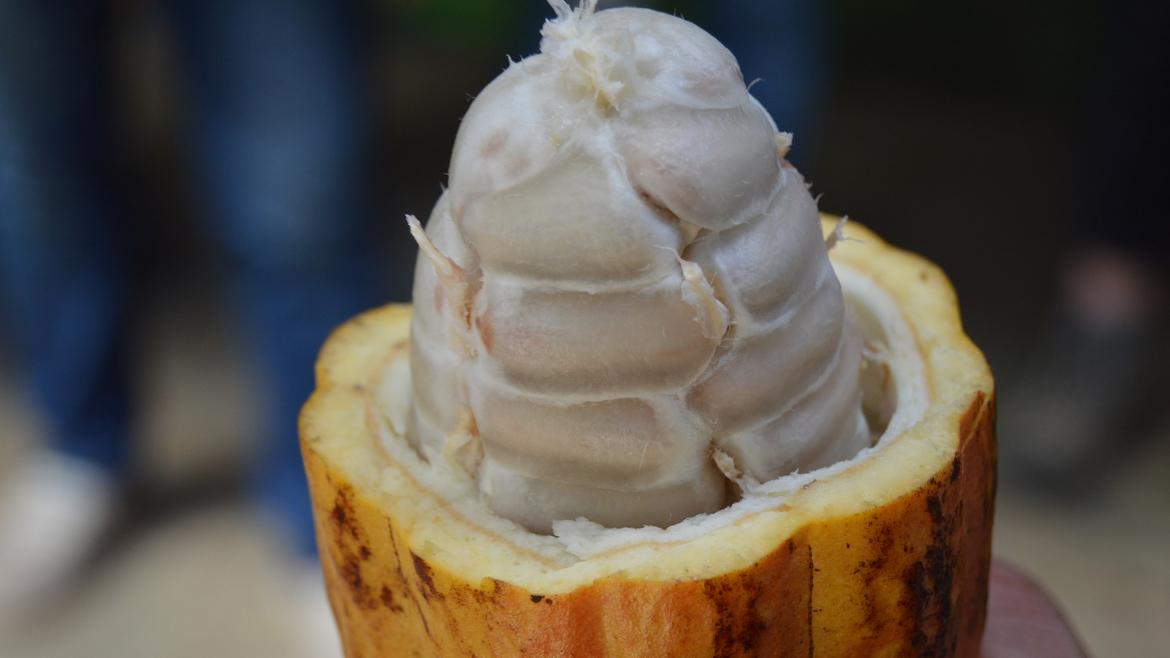 After the extinction of megafauna, humans took up the mantle of dispersing and saving many plant species we can still eat today

All of them go back before the arrival of humans in the Western Hemisphere, when they were snacked on by enormous animals known as megafauna.

Blonder, an assistant professor in the School of Life Sciences at Arizona State University, co-authored a paper published earlier this month in the Proceedings of the National Academy of Sciences that posits that after megafauna like the giant ground sloth became extinct, humans expanded the range of the foods they ate, rather than contracting the areas where the foods grew.

Most of the fruits that have lasted all these tens of thousands of years are exotic to the average American, but are still being sold and eaten in markets in places like Lima, Peru, or Guayaquil, Ecuador.

“One of the big takeaways from this study is that as we seek to diversify human diets and move back to food systems that are less dependent on a small set of crops, it’s incredibly important to think about this bigger legacy of species that humans have used in the past and that megafauna before them have also used for food,” Blonder said.

Traditionally, the idea that humans killed off a vast number of animal species that dispersed plant species has been seen as a negative.

“Think of an avocado,” he said. “You can’t think of many animals that could swallow an avocado whole and then excrete that seed kilometers away, allowing that population to spread. The classic idea has been: You lose the megafauna, you lose the dispersal capability, and many plant populations, especially the large-seeded ones, suffer as a consequence. … What this study is showing is that a lot of that slack has actually been taken up by humans instead. While we’re good hunters, we’re also very good dispersers. While we may not be dispersing for the purpose of helping the landscape directly, we disperse for the purpose of feeding ourselves and that result is the same.” Assistant Professor Ben Blonder recently joined the School of Life Sciences, where he'll continue his research on food sources from tropical areas and their introduction to the modern North American diet. He sits in his new lab, yet to be set up, on March 20. Photo by Charlie Leight/ASU Now

Ironically, human diets are shrinking in variety all over the world, Blonder said. There’s a huge amount of evidence published showing that diets for the most part are homogenizing on a global scale.

“The set of species and crop types that people are using for food is converging towards a much smaller set of crops, a smaller set of grains,” he said. “Many traditional roots and fruits are now being consumed and traded at much lower levels than they have historically. We’re losing a lot of our heritage and our legacy on that front.”

There are a lot of foods eaten by indigenous people that are being ignored by the world at large. Diets need to be rediversified, Blonder said.

“One of the exciting things about this study is the set of fruit species that people have eaten in the past and could eat now is much larger than the one that most are accustomed to eating,” he said.

The Sonoran Desert has several hundred native species used by Native people, he pointed out. If no more food was being trucked into Arizona, “you would find that there are actually a huge number of species out here that would sustain people, should we choose to use them.”

“We have this multi-thousand-year legacy of human use of plants on our landscapes,” Blonder said. “I think what this study does is help us understand the scope and scale of that legacy and teaches us that we may be able to begin using it again.”

Partisanship in Congress has grown so extreme that there is little incentive for elected officials to work together — and it might take a catastrophe for the situation to improve.That was the view of two longtime Republican politicians from Arizona — Sen. Jeff Flake and former Sen. Jon Kyl — who both decried the lack of bipartisan cooperation during a talk at Arizona State University on Wedn... Partisanship in Congress has grown so extreme that there is little incentive for elected officials to work together — and it might take a catastrophe for the situation to improve.

That was the view of two longtime Republican politicians from Arizona — Sen. Jeff Flake and former Sen. Jon Kyl — who both decried the lack of bipartisan cooperation during a talk at Arizona State University on Wednesday night.

“The culture rewards the extremes, and there is no market for being the one to compromise,” Flake said.

“Until voters will value that again, we’ll have the problems we do today.”

The two men spoke at Galvin Playhouse during the 20th annual John J. Rhodes Lecture in Public Policy and American Institutions, presented by Barrett, The Honors College at ASU.

Kyl said he fears a catastrophe due to the country’s lack of military preparedness.

“Or there could be an economic collapse,” he said. “Both of those are real possibilities because of decisions that have been deferred.”

The two blamed several factors on each party’s shift to its extremes.

“Social media has exacerbated it. It’s become easier for people to be in an echo chamber and only expose themselves to opinions they agree with,” Flake said.

“Also, the time it takes for somebody to have a thought and your fingers to type a message and for that to go out is not the equivalent of what needs to happen for major policy to be introduced,” he said. “And it makes it more difficult to pull back or compromise after that because you can’t take it back.” 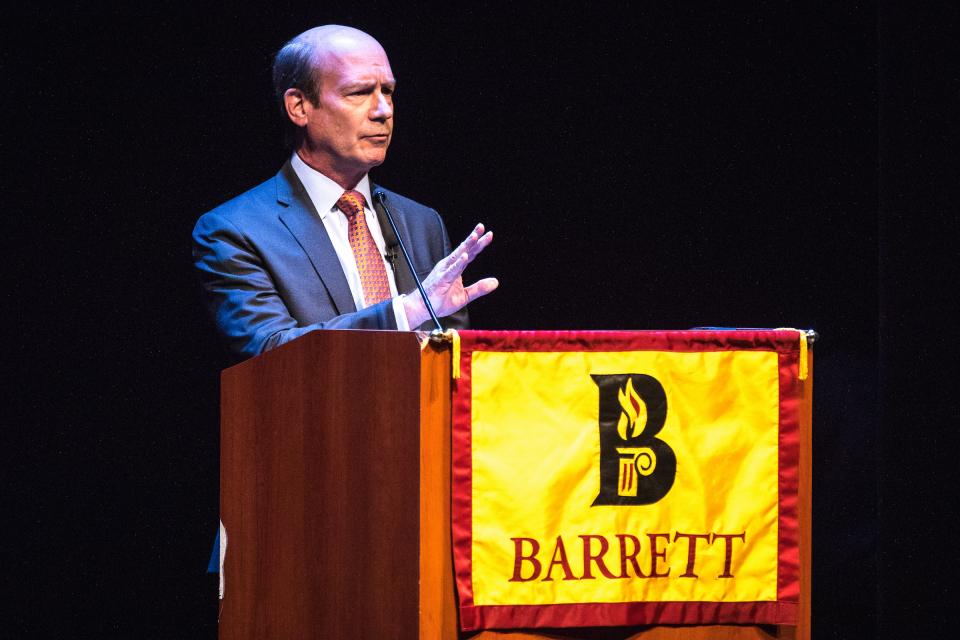 Kyl blamed cable news and talk radio for inciting conflict between the parties.

“The object of the person on TV is to get ratings so stations can get money. It’s not to educate,” he said.

The erosion of cooperation started happening several years ago, said Kyl, who served 18 years in the Senate and eight years in the House of Representatives. He retired in 2013.

“There are two kinds of members,” he said. “Those who are partisan and that’s it — they’re there to fight the other side. And those who are there to do good.

“I worked with Democrats for months on many things. We learned to trust each other, and that’s the key. It takes a long time to build that relationship.”

Both politicians said that it’s up to voters to change the course, and Flake said that he’s optimistic it will happen eventually.

“The longer I’m in Washington, even with the frustration I’ve experienced, you can see we have a good system. The pendulum swings and when one party takes it too far, it swings the other way.

“It’s a system that can withstand the foibles of the people who go through it.”

The talk was moderated by J. Scott Rhodes, the son of John J. Rhodes, an Arizona Republican who served in Congress from 1953 to 1983 and was the driving force behind congressional authorization of the Central Arizona Project. As minority leader of the House of Representatives, he was among a handful of Republicans who met with President Richard M. Nixon in 1974 to tell him that impeachment was imminent. Nixon resigned two days later.

“Watergate is a memory that is slipping away, but my father was under tremendous pressure during that time,” Rhodes said.

He asked Kyl and Flake to describe how members of Congress can work with a president they disagree with.

“You like to have good relationships. Your worst enemy today is the guy you need tomorrow,” Kyl said, noting that he didn’t recall a time when Presidents Bill Clinton, George W. Bush or Barack Obama threatened to damage him politically.

“I wish I could say I haven’t been threatened by the White House,” deadpanned Flake, a frequent critic of President Donald Trump.

“When the president has appointed a good, conservative judge, I’ve supported him. When he proposed a ban on Muslims, I’ve opposed him,” he said.

At the end of Wednesday’s event, an audience member called out, “Will you run for president?”

Flake smiled and said, “Next question.”