Arizona has a rich historical legacy, and there’s no better time to appreciate it than in March, when temperate weather combines with opportunity for adventure during Arizona Archaeology and Heritage Awareness Month.

To help you navigate our state’s incredible past this month, four Southwest archaeologists from Arizona State University's School of Human Evolution and Social Change share their insights on what to see, which mysteries keep them up at night and how you can get involved in protecting the past.

Question: What, to you, is the most amazing aspect of Arizona’s ancient past?

Associate Research Professor Arleyn Simon: The diversity of cultural traditions and environmental zones, as well as the movements and regional interactions among prehistoric settlements that can be determined based on artifacts, architecture, and agricultural and hunting activities. Arizona has always been a dynamic cultural and natural landscape, subject to change and adaptation.

Associate Professor David Abbott: I love studying the amazing and sometimes puzzling accomplishments of the Hohokam. They built and managed the largest and most extensive irrigation infrastructure in prehistoric North America. They continuously occupied the same villages and towns for 1,000 years, and they organized a regional economy that stretched over an area the size of South Carolina. And yet, they did these things apparently without marked social differentiation or hierarchical, institutionalized leadership. Archaeologists refer to this disconnect as the “Hohokam Enigma,” which, so far, defies explanation.

Assistant Professor Matthew Peeples: One recent discovery that has me excited is the surprisingly early arrival and spread of agriculture in southern Arizona. We now have evidence at multiple sites of cultivated maize from over 4,100 years ago. One of the most incredible sites was located at the Tucson Wastewater Facility, where agricultural fields were so well preserved you could actually see the holes where individual corn plants were last planted probably well over 2,500 years ago.

Q: What Arizona archaeological site or museum would you recommend people visit this March?

Peeples: There are so many great places, it’s hard to pick just one. I would suggest people head over to the Deer Valley Petroglyph Preserve and Museum in Glendale, which is operated by our school and its Center for Archaeology and Society. The museum sits at the edge of the Hedgepeth Hills and protects 47 acres with over 1,500 petroglyphs, the densest concentration of rock art in the Phoenix Basin. We’re having an event for Archaeology Month there on March 17 with lots of demonstrations and talks.

Professor Michelle Hegmon: I recommend people visit Mesa Grande, a mound larger than a football field that the Hohokam built between A.D. 1100-1450. Once a hub of activity, the mound was located near large irrigation canals and surrounded by a village that may have been home to as many as 2,000 people. Today, visitors can explore the site and see a reconstruction of a Hohokam ball court.

Abbott: Pueblo Grande was the largest and most politically prominent town of its time in the Phoenix Basin. Pueblo Grande Museum is a Phoenix city park that preserves and interprets the eastern third of the ancient ruins, including a massive platform mound, ceremonial ball court and architectural reconstructions of Hohokam households.

Q: What are you researching in Arizona or the greater Southwest?

Abbott: I designed and run a long-term research program aimed at ancient Hohokam household pottery. Through this work, I’m able to model regional exchange and social networks, investigate the impact of large-scale irrigation on sociocultural evolution, and develop the unique contribution that ceramic research can make to the study of prehistoric communities.

Peeples: Most recently, I’m working with a large team of archaeologists, sociologists and computer scientists to explore the role of ancient social networks in some of the Southwest’s dramatic social changes in the centuries leading up to the arrival of Europeans.

Hegmon: I’m researching the Mimbres region of New Mexico and the U.S. Southwest. I have studied social transformation and the lived human experience in these areas, and I led a team in creating the Mimbres Pottery Image Digital Database, which contains photos and data on almost all known Mimbres black-on-white pottery — the distinctive style of that region.

Simon: I’m working on a project for the Casa Grande Ruins National Monument with archaeology doctoral student Christopher Caseldine. He and team members recorded the decorated pottery sherds they saw on the ground in order to provide better time period dates for parts of the site. Much can be learned from in-field observations without even collecting artifacts.

Q: How can non-professionals engage in archaeology?

Hegmon: Archaeology Southwest is a wonderful organization that works with volunteers, experts and communities to research the ancient peoples of our region, while keeping conservation and protection of archaeological sites a top priority.

Abbott: The ancient past is a source of wonder and enjoyment to many enthusiasts across Arizona. The Arizona Archaeological Society boasts of numerous, well-organized and active chapters all around the state. Their members receive training, participate in fieldwork and organize fieldtrips.

Simon: Visit the many federal and state parks and monuments as well as museums around the state. You can also ask about volunteer opportunities at your favorite local museum or a “friends” group related to a forest or monument. There are many opportunities to learn more and be involved in preservation.

Peeples: Arizona has a vibrant site steward program. This program consists of volunteers who are trained in archaeological methods and recording procedures so they can work with professional archaeologists and land agencies to combat vandalism and damage to archaeological sites on state public lands. It’s a great way to get involved and help protect our priceless archaeological resources.

Eli Perez currently stands as the sole Fulbright scholar from Mexico at Arizona State University, but that is likely to change as ASU’s Graduate College carves out more opportunities for talented international students to study here and for Sun Devils to go abroad.Several Graduate College initiatives are in place or underway to provide faculty and units a better understanding of the internationa... 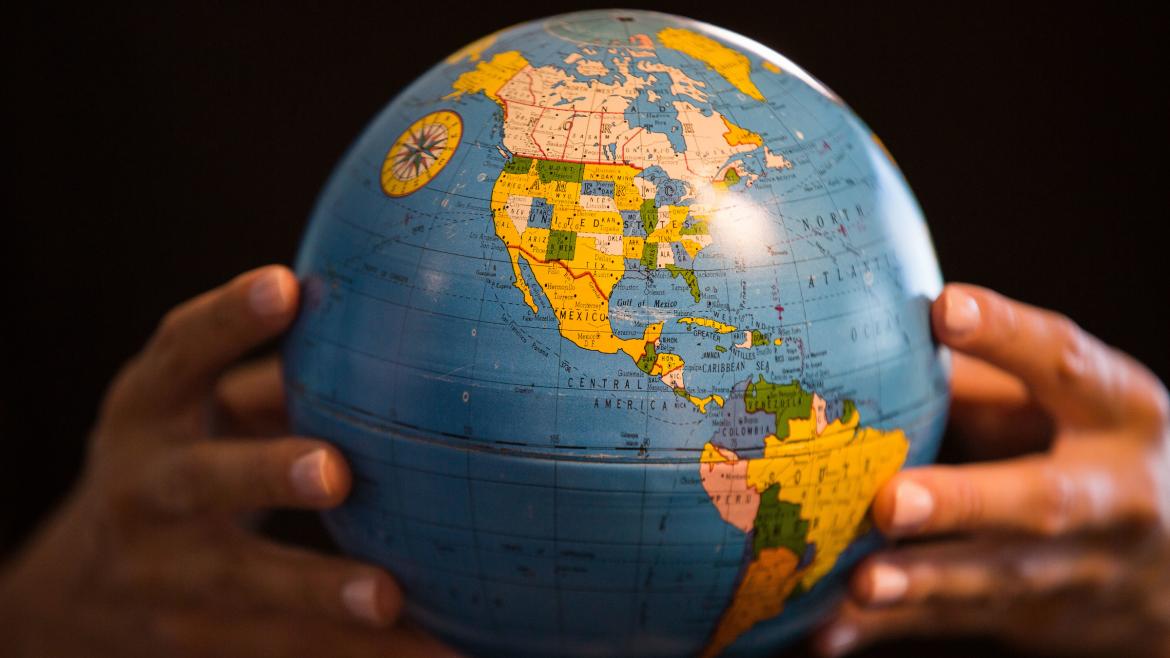 Eli Perez currently stands as the sole Fulbright scholar from Mexico at Arizona State University, but that is likely to change as ASU’s Graduate College carves out more opportunities for talented international students to study here and for Sun Devils to go abroad.

Several Graduate College initiatives are in place or underway to provide faculty and units a better understanding of the international environment and the processes to recruit and promote graduate scholars.

“We want to serve as a resource for colleges and units in relation to international graduate education affairs,” said Alfredo Artiles, dean of ASU’s Graduate College. “That is, we aim to support the creation and advancement of partnerships, find key opportunities around the world to attract quality students, and contribute to the global engagement agenda of the university.”

Everything begins with data. The Graduate College produces an annual report detailing international graduate student enrollment trends at ASU, including country of origin by unit, by program, sending universities, etc.

“The report is useful because units can see where their graduate student population comes from and then raise questions about strategic initiatives,” Artiles said. “How do we advance our international connections? Do we need to target and prioritize certain regions of the world? Should we consider other regions of a country or a continent where there are high-quality institutions that we want to recruit from?”

“We have a team now collecting information about prestigious awards, reaching out to units and asking them to consider and nominate graduate students,” Artiles said.

"The idea is that you prepare people by allowing them to experience each other’s culture, exchange and learn new ideas, and then have them contribute back to their home countries."
— Alfredo Artiles, dean of ASU’s Graduate College

The university already has a system in place to nominate ASU undergraduates and help them compete for such scholarship awards as Fulbright and Rhodes. But doing so for the more than 18,000 ASU grad students the Graduate College oversees is relatively new.

“We just launched this initiative this academic year,” Artiles said. “We want our graduate students to make the news, to get the recognition their work deserves through distinguished fellowships and awards.”

Just over 30 international graduate students are currently here under the Fulbright program from all over the globe, including from Myanmar, Pakistan, Afghanistan and Kosovo. While the top sending countries for master’s degrees are India and China, Artiles hopes to see an increase of scholars from closer to home.

“One of our priorities is to target underrepresented regions of the world in our graduate student population, such as Latin America and Africa,” said Artiles, himself a former Fulbright scholar from Guatemala. 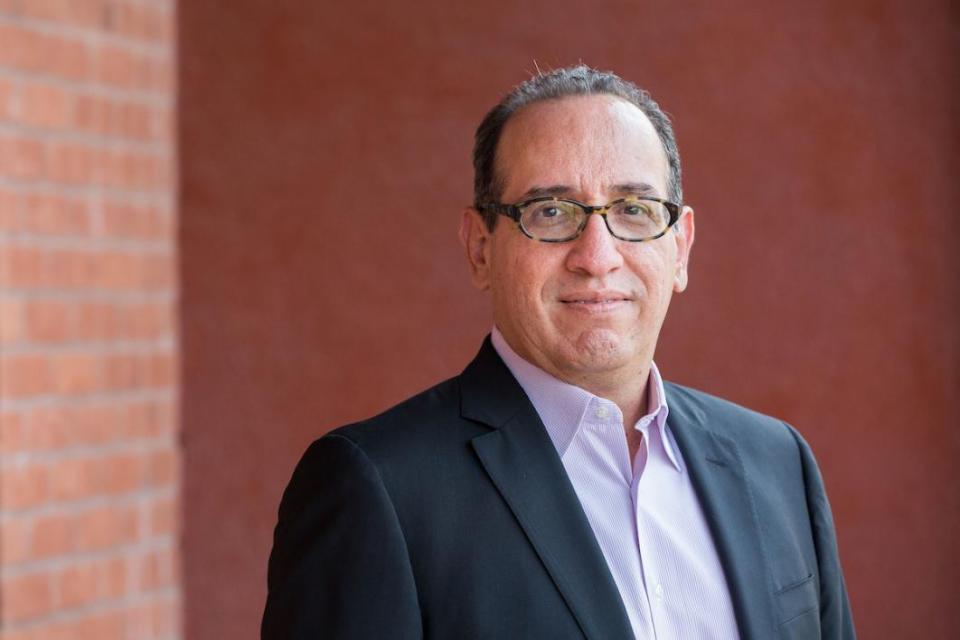 As a U.S. Department of State-sponsored entity, the Fulbright program strengthens international relationships by exposing students to different cultures by way of foreign students studying at U.S. universities and American students going abroad.

“A very rigorous process is used to bestow these scholarships,” Artiles said. “I think very highly of the Fulbright awards.”

It is through Fulbright that Perez, the Mexico scholar, chose ASU to work toward earning his doctorate in geological sciences from the School of Earth and Space Exploration. Although he admits ASU is not the first name that comes to mind when people in Mexico think of U.S. universities, Perez became interested in ASU after it was highly recommended by one of his trusted counselors, also a previous student here.

“My experience here in ASU has been really good,” said Perez, who is a professor and researcher at the Universidad Autónoma de Ciudad Juárez. “The commitment of the university to diversity and to include people of all backgrounds, it’s amazing.”

After ASU, Perez plans to return to Mexico where he seeks to replicate the studies he conducted here on ecological and hydrological processes within deserts, something he says is not well known there although more than a third of the country is desert or semi-desert.

“We cannot create plans for the future if we don’t know how the ecosystem actually works,” Perez said. “So in the end it depends on nature.  If we don’t understand nature then we don’t have a clear future.”

Perez exemplifies why the Graduate College is pushing to increase student scholar exchanges. The value of the type of international collaboration that programs like Fulbright provide is immense.

“The idea is that you prepare people by allowing them to experience each other’s culture, exchange and learn new ideas, and then have them contribute back to their home countries,” Artiles said. “We also benefit substantially from having people from around the world in our midst because they infuse creativity and innovation in our work, challenge us to reconsider longstanding assumptions, and advance our global engagement goals.”