Arizona State University’s Consortium for Science, Policy & Outcomes (CSPO), a research unit of the Institute for the Future of Innovation in Society, has once again been named one of the top 10 think tanks for science and technology policy in the latest edition of the University of Pennsylvania’s “Global Go To Think Tank Index.”

This is the second consecutive year that CPSO has been ranked in ninth place and the fourth consecutive year it has appeared in the top 10. The Think Tanks and Civil Societies Program (TTCSP) of the Lauder Institute at the University of Pennsylvania, with the voting help of a panel of more than 1,900 peer institutions and experts from the media, academia, public and private-donor institutions and governments, publishes the annual index ranking the world’s leading think tanks in a variety of categories. 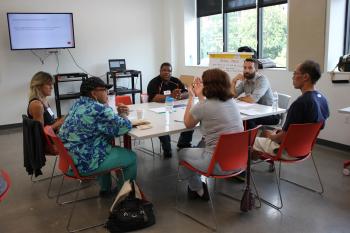 CSPO researchers hold a forum with local community members on the topic of driver-less cars. Photo by Kimberly Quach

“It is always a great honor to be recognized in these rankings, which come from our peers across the globe,” says Dave Guston, co-director of CSPO and director of ASU’s School for the Future of Innovation in Society (SFIS). “It indicates the reach and impact of the work that we do.”

“Our goal is to help bring scientific and technological advance into better alignment with societal needs and aspirations,” says Daniel Sarewitz, CSPO co-founder and co-director. Founded in 1999, CSPO also sits at the core of the research and policy engagement activities of SFIS, which was created in 2015. CSPO is dedicated to understanding the linkages between science and technology and its effects on society and to developing knowledge and tools that can more effectively connect progress in science and technology to progress toward desired societal outcomes.

The consortium draws on the intellectual resources of Arizona State University and other institutions for the scholarly foundation to assess and foster outcome-based policies across a broad portfolio of publicly funded scientific research. The consortium’s core commitment is to generating useable knowledge for real-world decision making.

After a hard-fought battle with one of the top-ranked teams in the nation, No. 20 Arizona State men's tennis dropped a tough match against No. 3 Stanford, 4-3. ... After a hard-fought battle with one of the top-ranked teams in the nation, No. 20 Arizona State men's tennis dropped a tough match against No. 3 Stanford, 4-3.