Most of us enjoy meeting a friend for a cup of coffee and a chat, but few of us pause to think about how we learn to have a conversation.

Viridiana Benitez, a new assistant professor in the Department of Psychology at Arizona State University, thinks a lot about how people learn language, and not just because she learned a second language as a young child. 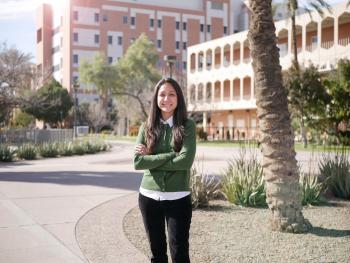 Benitez joined ASU this year and heads the Learning and Development Lab, which uses language to study how young children learn in general. Participants in Benitez’s experiments range in age from six-months-old to early elementary school ages.

Benitez is currently testing how children learn to map words onto objects. Children hear a constant stream of words but do not always receive exact information about which words match objects. A parent might tell a young child it is time to put on shoes but does not point to a shoe. To test how children learn pairings between words and objects, Benitez uses unfamiliar objects and made-up words.

The Learning and Development lab is currently collecting data from families in the community, through ASU’s partnership with the Children’s Museum of Phoenix. In the experiment at the museum, children aged 3–5 years look at a series of pictures that show two unfamiliar objects. At the same time the two objects appear on the screen, the children also hear two words. One of the words is always the name of a pictured object. For example, the word “modi” might always be paired with a red object, the word “blicket” with a green object, or the word “dax” with a yellow object. By asking a child to point to the “modi,” the researchers can track how children connect the words and objects.

There is only one novel word per unfamiliar object in the current experiment. Next, Benitez plans to test how children map words onto objects when the objects have more than one name. Objects having more than one name is similar to what a bilingual child experiences while learning what objects are called in different languages.

Benitez was born and raised in Texas, and her first language is Spanish. Her parents grew up in rural farming communities in Mexico, and Benitez started her education in ESL classes outside of Houston.

“Many times, I felt like I wasn’t good at English because I was bilingual,” she said. “I thought it was a negative.”

By the third grade, Benitez had placed out of the ESL classes, but it would take many more years and a newfound love of psychology for her to understand the positive aspects of growing up bilingual.

During her junior year of high school, Benitez signed up for an elective course on the basics of sociology and psychology. It was a defining moment in her life.

“I remember that I thought, ‘I want to be a psychologist,’ because I wanted to understand how people think,” she said.

Benitez describes herself as an observant, quiet person who has always been interested in people, particularly why people do what they do. As a high schooler, she was surprised that there were actually careers in what she was interested in.

“At some point, someone said that to work in psychology, you have to get a PhD. I didn’t even know what that was, but I thought, ‘I’ll do a PhD,’” Benitez, who is a first-generation college student, said. “Someone else said, to do a PhD, you have to have research experience. So, I went and looked for a research opportunity in psychology.”

Benitez figured it all out, and she started by attending a community college near her home. Two years later she transferred as a junior to the University of Houston to study psychology.

Benitez started looking into research opportunities, which she knew were necessary for a doctorate, and met a new psychology faculty member who was studying how babies and young children learned language.

“I grew up speaking two languages, but I didn’t realize what it meant to be bilingual” Benitez said. “Then I started reading cool research about what it takes to learn two languages and that can tell us how powerful the brain can be. It blew my mind.”

Finally, a psychologist in training

Benitez worked in the lab of Hanako Yoshida, an associate professor of psychology at the University of Houston. Yoshida introduced Benitez to many different ways to study psychology. She encouraged Benitez to complete an honor’s thesis and to apply widely to doctoral programs in psychology. Benitez initially thought she would stay in Houston, or at least Texas. At the urging of her mentor, she applied to the Cognitive Development Lab at Indiana University, where Yoshida herself was also an alumna. At Indiana, Benitez felt an instant connection with Linda Smith, a professor of psychology who ran the Cognitive Development Lab.

So Benitez moved to Bloomington.

She was excited and scared to move away from home, and moving to the Midwest was a culture shock.

“Houston is one of the most diverse cities in the country,” Benitez said. “In Bloomington, it felt like a different planet. I had a hard time finding avocados and tortillas in the grocery store and had to figure out places where those things were sold.”

It was one of Benitez’s passions outside of the lab that soon helped Bloomington feel more like home. While out dancing one night, Benitez met another graduate student who was from Texas and who had a parent from Mexico. She and Edward Vargas were married just over three years later in San Antonio, before they both moved to the University of Wisconsin – Madison for postdoctoral studies. Vargas joined ASU at the same time as Benitez; he is an assistant professor in the School of Transborder Studies.

@SunDevilHoops Falls to Colorado in First Round of Pac-12 Tourney

@SunDevilHoops was unable to overcome a hot shooting performance by Colorado in a 97-85 loss in Wednesday's opening round of the Pac-12 Tournament. ...

@SunDevilHoops Falls to Colorado in First Round of Pac-12 Tourney @SunDevilHoops was unable to overcome a hot shooting performance by Colorado in a 97-85 loss in Wednesday's opening round of the Pac-12 Tournament.