Lithium-metal batteries are among the most promising candidates for high-density energy storage technology in an expanding range of digital “smart” devices and electrical vehicles, but uncontrolled lithium dendrite growth, which results in poor recharging capability and safety hazards, currently tempers their potential.

Dendrites are needle-like growths that appear on the surface of lithium metal, which is used as the anode, or negative electrode, of a battery. They induce unwanted side reactions that reduce energy density, and at worst, cause shorting of the electrodes that can lead to fires or explosions. 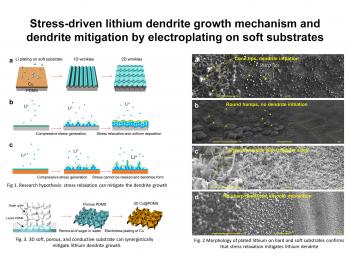 New research from Arizona State University finds that using a 3-D layer of polydimethylsiloxane (PDMS), or silicone, as the substrate of the lithium metal anode can mitigate dendrite formation and both dramatically extend battery life and diminish safety risks. The paper, “Stress-driven lithium dendrite growth mechanism and dendrite mitigation by electroplating on soft substrates,” was published today in Nature Energy.

According to Hanqing Jiang, a professor in ASU's School for Engineering of Matter, Transport and Energy, in the Ira A. Fulton Schools of Engineering, and a lead researcher on the paper, the findings have relevance for both lithium-ion and lithium-air batteries, as well as implications for other metal-anode-based batteries.

“Almost all metals used as battery anodes tend to develop dendrites,” Jiang explained. “For example, these findings have implications for zinc, sodium and aluminum batteries as well.”

Jiang said he and the research team, rather than approaching the problem from a materials or electrochemical perspective, looked for solutions as mechanical engineers. “We already know that tiny tin needles or whiskers can protrude out of tin surfaces under stress, so by analogy we looked at the possibility of stress as a factor in lithium dendrite growth.”

The first round of research involved adding a layer of PDMS to the bottom of the battery anode.

“There were remarkable reductions in dendrite growth,” Jiang said.

The researchers discovered that this is directly related to the fact that stress accumulated inside the lithium metal is relieved by the deformation of the PDMS substrate in the form of “wrinkles.”

“This is the first time convincing evidence shows that residual stress plays a key role in the initiation of lithium dendrites,” Jiang said. 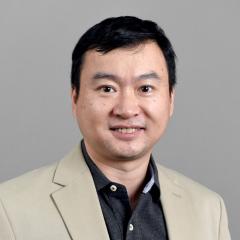 In addition to obtaining a fundamental understanding of the lithium dendrite growth mechanism, Jiang’s group also came up with a smart way to utilize the phenomenon to extend the life of lithium-metal batteries while maintaining their high energy density. The solution is to give PDMS substrate a three-dimensional form with a lot of surface.

“Envision sugar cubes that contain a lot of small internal pores,” Jiang explained. “Inside these cubes, the PDMS forms a continuous network as the substrate, covered by a thin copper layer to conduct electrons. Finally, lithium fills the pores. The PDMS, which serves as a porous, sponge-like layer, relieves the stress and effectively inhibits dendrite growth.”

Partners in the research include members of Jiang’s group at ASU: Xu Wang, Wenwen Xu and Haokai Yang; Wei Zeng, a visiting ASU scholar co-advised by Jiang and Professor Huigao Duan at Hunan University, China; and researchers from Rice University including Liang Hong, Fan Wang and their adviser Ming Tang. Funding was provided in part by the Department of Energy.

When Lance Gharavi finalized the 2015–16 theater season for the School of Film, Dance and Theatre in Arizona State University's Herberger Institute, he made it a point to include women’s voices. Five of the seven theater productions told stories that focused on female characters, and the majority of the plays were written by women. “This is nothing to be smug about,” Gharavi said at the ...

The Bridge Initiative named Lance Gharavi 2018 Ally of the Year

When Lance Gharavi finalized the 2015–16 theater season for the School of Film, Dance and Theatre in Arizona State University's Herberger Institute, he made it a point to include women’s voices.

Five of the seven theater productions told stories that focused on female characters, and the majority of the plays were written by women.

In his role as artistic director of theater for the school, Gharavi has continued “doing the obvious” and selecting works that advance the representation of gender and diversity on the stages of the School of Film, Dance and Theatre and on the broader stages of Phoenix and the American theater. 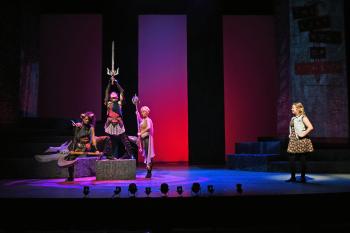 “She Kills Monsters” was one of several plays focusing on female characters featured in the School of Film, Dance and Theatre’s 2015–16 season. Photo by Tim Trumble Download Full Image

For instance, last season’s production “Men on Boats” featured an all-female cast. In the script, playwright Jaclyn Backhaus noted, “The characters in ‘Men on Boats’ were historically cisgender white males. The cast should be made up entirely of people who are not.”

The guest director of that play, Tracy Liz Miller, is also the co-founding producing artistic director for The Bridge Initiative: Women in Arizona Theatre, an organization that recently recognized Gharavi for his contributions toward gender parity in the theatrical field in the Phoenix Valley region.

“The Bridge Initiative understands that if we all work together, regardless of gender identity, we all go further,” Miller said. “Lance embodies the selfless determination to serve all of his students but also to address the disparity of voices that are represented in contemporary theatre around the country.”

Formed a few years ago, the Bridge Initiative is an incubator for professional women theater artists, promoting gender parity across all theatrical disciplines and contributing to the national conversation around equal representation and inclusion. This year the initiative created the Ally of the Year award, and presented it to Gharavi during the Building More Bridges Gala Celebration on Feb. 24.

“When we launched and raised the issue of so few female playwrights being produced, Lance's response was to present a 100 percent female-penned season,” said Brenda Foley, co-producing artistic director for the Bridge Initiative. “While we have experienced other men turn tail upon our introduction as the Bridge Initiative: Women in Theatre, Lance instead ran towards us.” 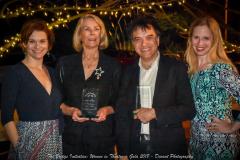 Gharavi said he supports the Bridge Initiative because different representation — different stories, from different voices — are needed to help bring about change.

Gharavi said he was honored to receive the award, but did so on behalf of the School of Film, Dance and Theatre and the Herberger Institute.

“I’m proud of the work we’ve done — faculty, staff, students — in programming our school’s seasons. I’m proud to be to be part of the Herberger Institute and ASU, proud of our mission of inclusion, and of projects like Projecting All VoicesProjecting All Voices, an initiative of the Herberger Institute for Design and the Arts supported by ASU Gammage, aims to support equity and inclusion in arts and design. Together, we’re building new structures and systems. We’re telling new stories.”