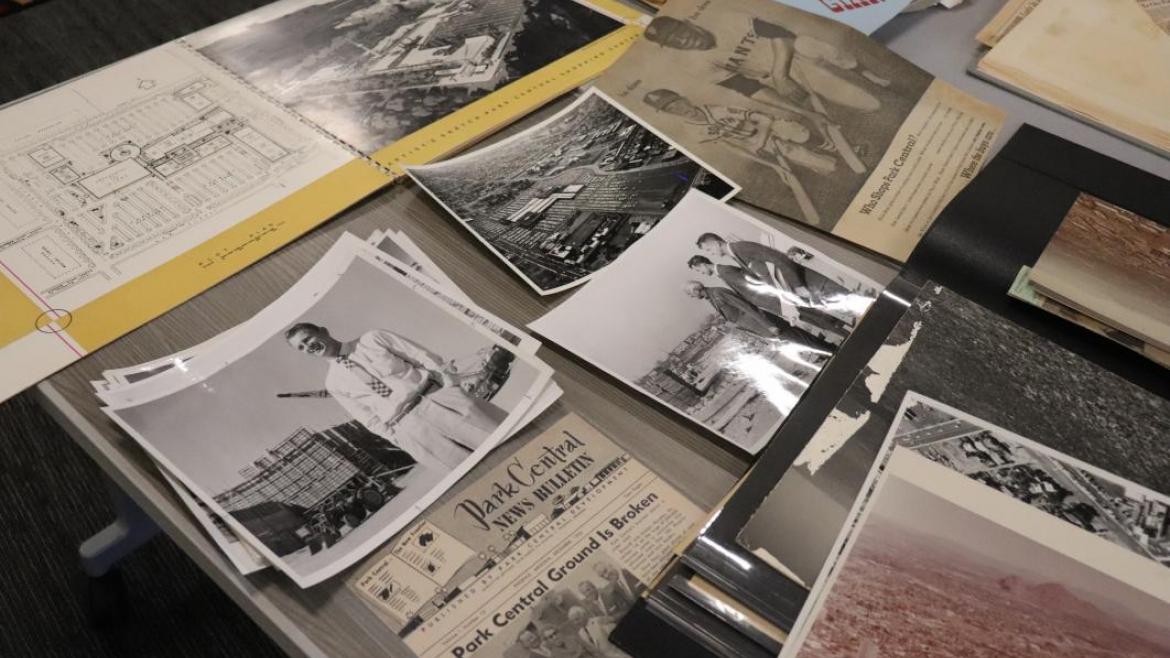 Researchers from across the university are coming together to analyze, preserve and revitalize historic materials found during the renovation of Park Central Mall

Researchers from across Arizona State University are coming together to analyze, preserve and revitalize historic materials found during the renovation of Park Central Mall in midtown Phoenix.

The materials found range from old photographs and advertisements to microfilm reels and antique signage, all depicting a midcentury Phoenix in the midst of monumental growth.

“This is a one-of-a-kind collection of newspaper clippings, photographs, advertisements and ephemera related to Park Central Mall,” said Matthew Delmont, director of the School of Historical, Philosophical and Religious Studies and professor of history. “It is a sort of time capsule that gives us a glimpse into Phoenix's cultural history from the 1950s through the 1990s. It is an important collection of everyday history that reveals where people socialized, what they bought, how they dressed, what they ate and how these styles and tastes changed over the decades.”

The site of Phoenix’s first shopping mall, Park Central Mall is undergoing renovations to revitalize and return the property to its stature as a hub for community gathering. The developers, Peoria-based Plaza Companies, in conjunction with Tucson’s Holualoa Companies, discovered the historic materials during the first few days of renovation. Sharon Harper, president and CEO of Plaza Companies, ASU Trustee and co-chair of ASU President's Club, reached out to ASU with the thought of preserving the materials.

An interdisciplinary team of ASU researchers from the School of Historical, Philosophical and Religious Studies (SHPRS), the Nexus Digital Research Co-op and ASU Library are working together to preserve and share the stories held within these historic pages.

“When you trace the history of Park Central Mall, you can see how Phoenix went from being a small town to being one of the largest cities in the United States,” Delmont said. “Phoenix has a rich history, but its history doesn't get as much attention as cities like Boston, Chicago or New York. Preserving the history of Park Central Mall is important because it was a hub that connected hundreds of thousands of Phoenix residents over multiple decades.”

Starting in 1957, Phoenix residents made memories at Park Central Mall. From shopping at Goldwater’s department store to hanging out after school, families congregated at the mall on Central Avenue. SHPRS Research Administrator Kristine Navarro-McElhaney and her team will be collecting those memories in community interviews and on collection days at the mall on March 3 and April 7.

“So many people have a deep connection with Park Central Mall — colorful stories, family memories and traditions that resonate with them to this day,” Navarro-McElhaney said. “We want to capture and preserve this rich history and not only highlight Park Central’s significance to those that experienced it, but preserve it for future generations.” An advertisement for the "First Annual Park Central & KUPD Pigeon Preakness," a pigeon race held at Park Central Mall in Phoenix on Oct. 12, 1968. The prize for first place was a "his-and-hers" set of matched Volkswagens. 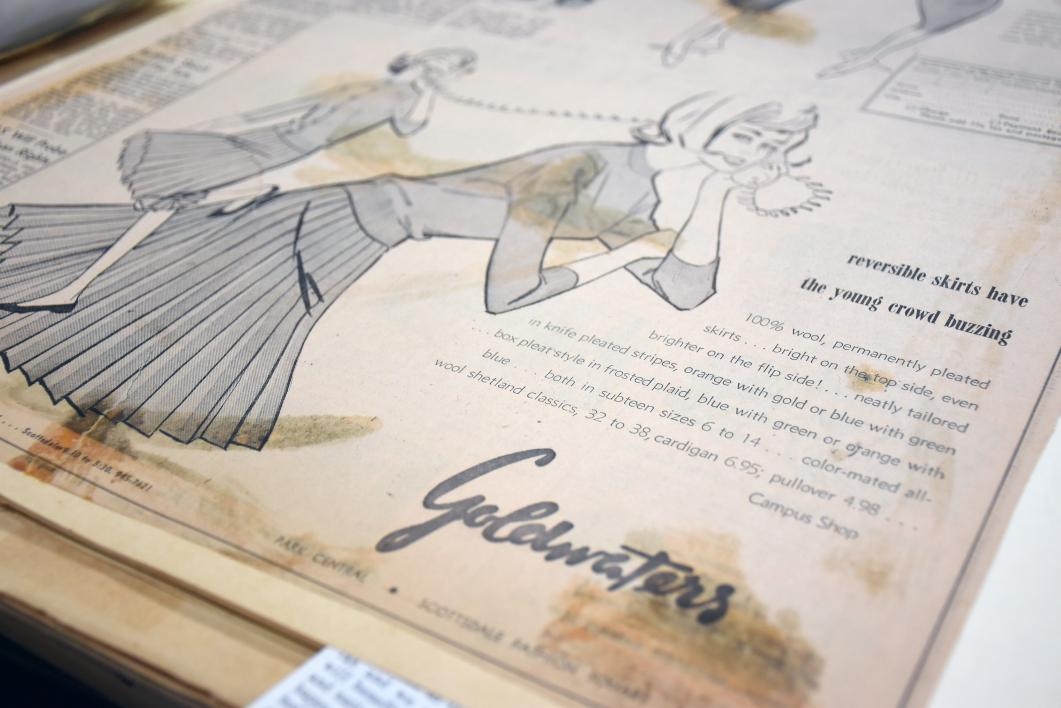 Goldwater's was a department store that functioned as a staple for Park Central Mall. The ad's headline states, "Reversible skirts have the young crowd buzzing."

Professor Matt Delmont, director of the School of Historical, Philosophical and Religious Studies, begins looking through these historic documents. 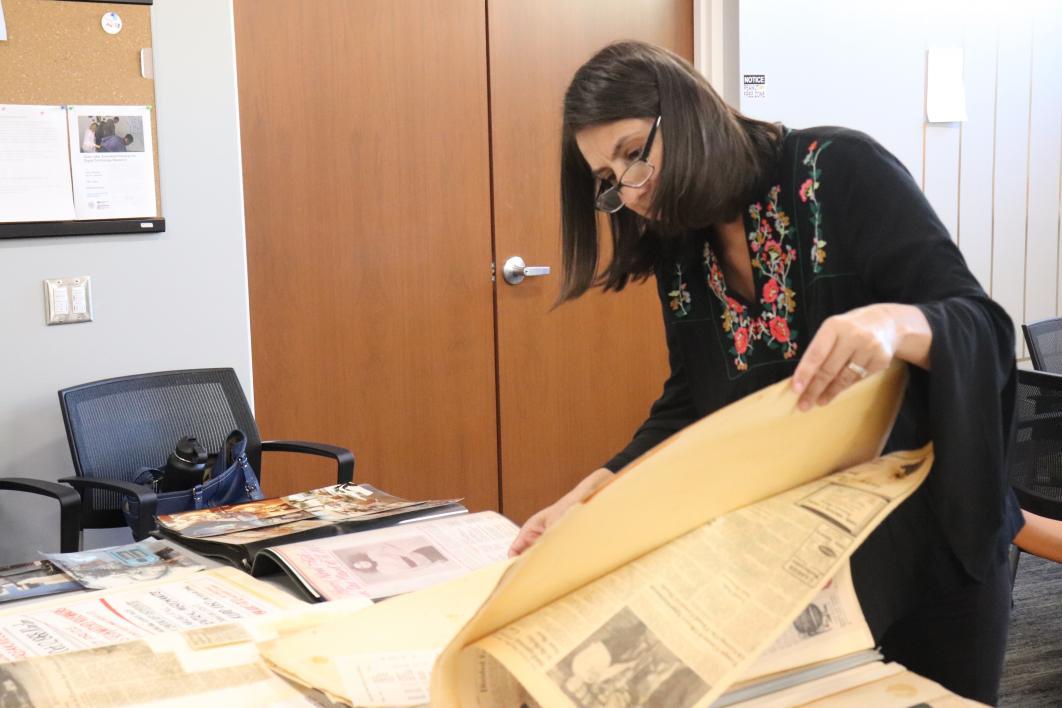 Ad advertisement in The Arizona Republic for the "Festival de France," held at Park Central Mall in February 1961.

The oral histories collected will accompany the printed materials found in the basement to tell the compelling story of the site. All materials will be displayed in a public celebration in May before being permanently housed in ASU Library archives.

The Nexus Digital Research Co-op will be developing an interactive web resource that will allow the public to engage with the artifacts from anywhere. Throughout the process, Nexus will be sharing insights and exciting finds on social media. You can follow along with the hashtag #ParkCentralStory.

“We will be using all of our media tools to bring this great collection to life. One of the great features of a web-based collection is that past and present Phoenicians can help us build something that really captures what Park Central Mall has meant to our communities,” said Jacqueline Wernimont, the director of Nexus. “It’s an opportunity both to create a truly public history and to imagine a new future for this iconic space.”

Nexus is a voluntary association of researchers who are interested in doing digital research and publication, located within the Institute for Humanities Research. People interested in participating in the Park Central Mall project can learn more about Nexus and join the co-op at nexuslab.org.

Interested in sharing your memory of Park Central Mall? Attend one of two collection days at the Phoenix Public Library @ Park Central at 3110 N. Central Ave.:

Or add a comment to the developing digital collection at parkcentralmall.org

“Everyone has a story,” Navarro-McElhaney said. “I would be honored if the community would come out to share them with me.”

This article was written by Leah Newsom and Erica May

Top photo: The historic materials found in Park Central Mall vary — from microfilm reels and news clippings to antique signage and old photos from the 1950s to 1990s. Photo courtesy of Erica May/School of Historical, Philosophical and Religious Studies

What do Olympians eat?

The most-decorated Olympian of all time made headlines in 2008 for something other than his athletic prowess — or, ahem, lung capacity — when some outlets alleged Michael Phelps, the U.S. competitive swimmer, maintained a diet of 12,000 calories a day. Those reports turned out to be bogus, but it didn’t stop the public from wondering: Just what do Olympians eat? And how much, and how often?A... What do Olympians eat?

Downtown Phoenix campus
What makes for a gold-medal diet? That depends on what sport you're tackling.
Ever wondered what's on the menu at the Olympic Village? Read on.
February 14, 2018

The most-decorated Olympian of all time made headlines in 2008 for something other than his athletic prowess — or, ahem, lung capacity — when some outlets alleged Michael Phelps, the U.S. competitive swimmer, maintained a diet of 12,000 calories a day. Those reports turned out to be bogus, but it didn’t stop the public from wondering: Just what do Olympians eat? And how much, and how often?

According to Floris WardenaarFloris Wardenaar is an assistant professor of sports nutrition, working for both ASU's College of Health Solutions and Sun Devil Athletics., Arizona State University assistant professor of sports nutrition and a leading dietitian on the Dutch Olympic Committee’s nutrition team, it depends on the athlete. But generally, they’re encouraged to eat the same proteins, fruits, veggies and whole grains they usually do, and to adjust their intake based on their daily strength output needs.

“This is the most important game in the world, and of their life, probably,” Wardenaar said. “So they shouldn’t be eating anything other than what they’re used to.”

Before Wardenaar gave advice to Olympians on what to eat, he watched them on TV as a child in the Netherlands. His interest in performance nutrition grew when he began cycling competitively at the age of 14.

This year, he’s excited to see the historically high-performing Dutch speed skating team continuing to excel at their sport. But before the games got started last Friday and his attention was commandeered, he took the time to illuminate ASU Now on the business of chowing down, champion-style.

Editor’s note: The following responses have been edited for length and clarity. 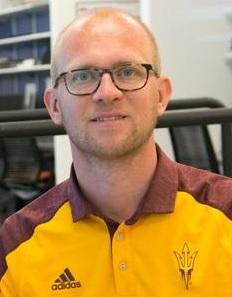 Question: Who determines what the Olympians are eating?

Answer: Some countries — like for example, the U.S., Australia and the UK — have a close relationship with the Olympic organization and are able to provide input as far as food offerings at the Olympic Village. But mainly what those countries want is beneficial for everyone. Before the 2016 Summer Olympics in Rio, Aramark was the preferred supplier. They brought their own dietitians with them to the village, so if an athlete wanted, he or she could directly consult with them. But I know some teams bring their own; the U.S. always brings several sports dietitians with the team.

A: With hockey, for example, the kind of nutrition you need depends on the position you play. Most enforcers will have different intakes compared to the center. It depends on the focus of the athlete. For ski jumpers, they benefit from being as light as possible but when their diet is too restrictive, they also lose muscle mass and therefore jumping power. So it’s about fine-tuning their diet and varying the protein, carbohydrate and fat contents based on their needs. Some good basic advice is to eat lots of protein, fruits, veggies and whole grains.

Q: How does an athlete’s diet vary depending on whether they are training or competing?

A: All athletes nowadays focus on mealtime planning, having about five meals a day, with plenty of protein. Depending on if they’re training or competing, they may change the timing of their meals slightly to make sure that their fuel is fully loaded before a competition.

Most of the time they train two times a day. So that means they have a light breakfast, then during the training session probably something like water or a sports drink, depending on the intensity. Then after that, they will probably have a recovery shake or else something to eat for lunch. After that, most of the time they rest for one or two hours, then the next training session begins. So again, they’ll have a light snack before that and then something afterward — a meal-replacement shake or dinner — to help them recover. Depending on the preference of the athlete, they might also want to have a light evening snack before they sleep.

Q: What kind of food do most Olympians eat?

A: One of the basic rules is to eat what they normally eat. This is the most important game in the world, and of their life, probably. So they shouldn’t be eating anything other than what they’re used to. At the Olympics Village kitchen, they have choices between Western food, halal, Asian food, everything. And of course, Asian food will be very good this year. I don’t think Americans will be complaining because all the kinds of food preferences you find in the normal American diet, you can find there. Some teams bring their own food, though. One time we had fridges where we were staying stocked with yogurt for our athletes because the Netherlands is a dairy country.

Q: Any predictions for the upcoming games?

A: During the last Winter Games, the Dutch won almost all of the medals in speed skating, but that will probably not happen this year because that was exceptional. Actually, one of the reasons that happened was because the U.S. speed skaters were underperforming at that moment. But I think the U.S. will definitely win more medals this year. There’s also short-track speed skating, and the Netherlands are doing better and better at that. So that’s something I’ll watch as well. The Olympics is such a special event, so I’ll probably have the television on all day.