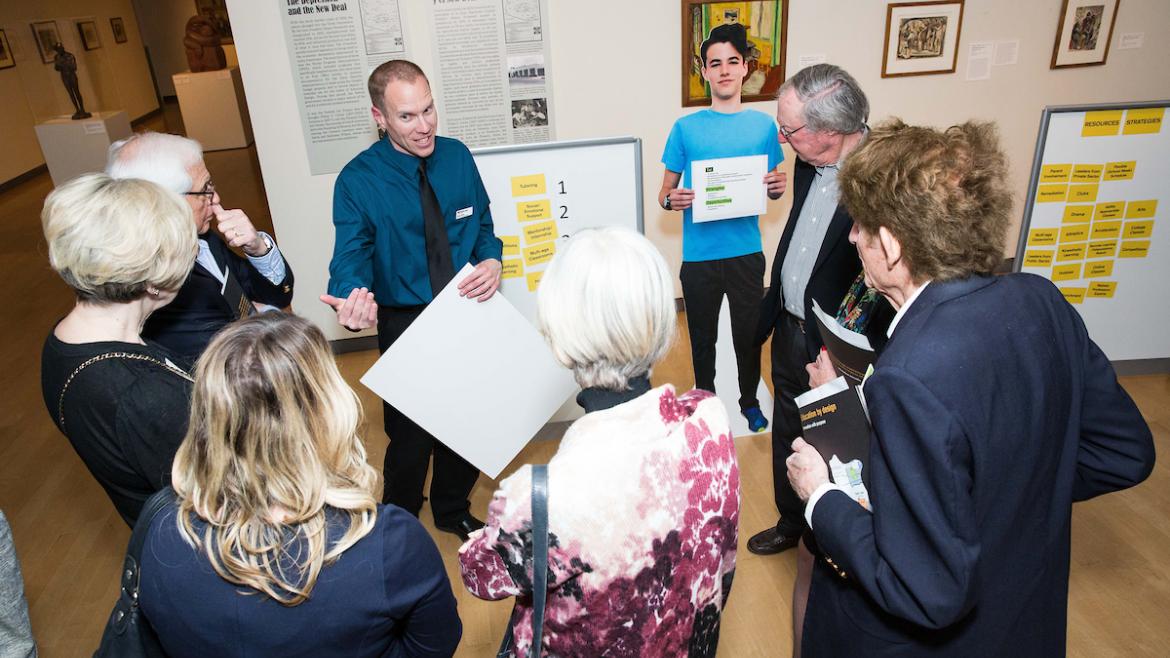 'Education by Design' reimagines the classroom

It’s a bold thing for an education dean of a major university to admit: The education system doesn’t work well enough for enough people and communities, and colleges of education have to change in order to be part of the solution.

Colleges must respond more urgently and creatively to the fact that the teacher shortage is at crisis levels, and the pipeline is thinning.

If the education system is to succeed in preparing learners for the challenges of the 21st century, the workforce needs a total redesign, said Carole G. Basile, dean of Arizona State University’s Mary Lou Fulton Teachers College. The one-teacher-to-one-classroom model must change. Experts are looking at a team approach — much like the new integrated health-care model in which a patient is seen by a team of specialists at once.

“We know that we’ve got a problem with teachers. We can sit here and wring our hands about the teacher shortage,” Basile said. “We can wring our hands that enrollment is down in our teacher programs, but the fact is, we have to do something about it.”

“If we’re not getting the education workforce we need, we need to redesign the profession, the workplace and how we prepare people for both,” Basile said.

“Education by Design: Innovation With Purpose in Schools and Systems” aims to do just that. Hosted by Mary Lou Fulton Teachers College, the Feb. 6 presentation at the Phoenix Art Museum provided an opportunity to share the college's vision of what a new education workforce should look like. That vision was shared with approximately 200 constituents, showcasing strategic initiatives and what they look like in action through education design stations, use-inspired research and contextual models such as the ASU Preparatory Academy and the Gary K. Herberger Young Scholars Academy at the Mary Lou Fulton Teachers College.

The audience was mostly composed of community members, education and business leaders, teachers, emeritus faculty, ASU alumni and donors, as well as ASU President Michael M. Crow. Together they toured interactive workstations, demonstrations and displays, speaking with experts and getting a glimpse of education's future.

“This is the work of all concerned with improving education for the greatest possible number of learners,” Basile said. “Schools, universities, business organizations, community organizations, parents. All of us.” 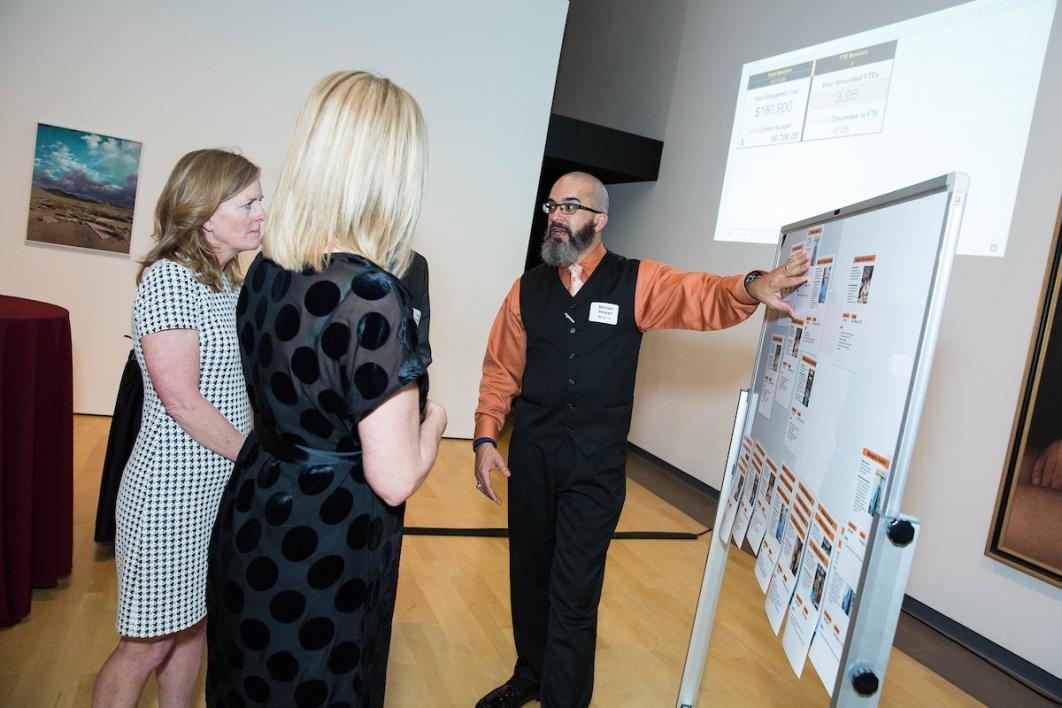 Mary Lou Fulton Teachers College Director of Workforce Development Michael Stewart introduces visitors to a budgeting game where they can mix and match teacher roles to fit their working budget. 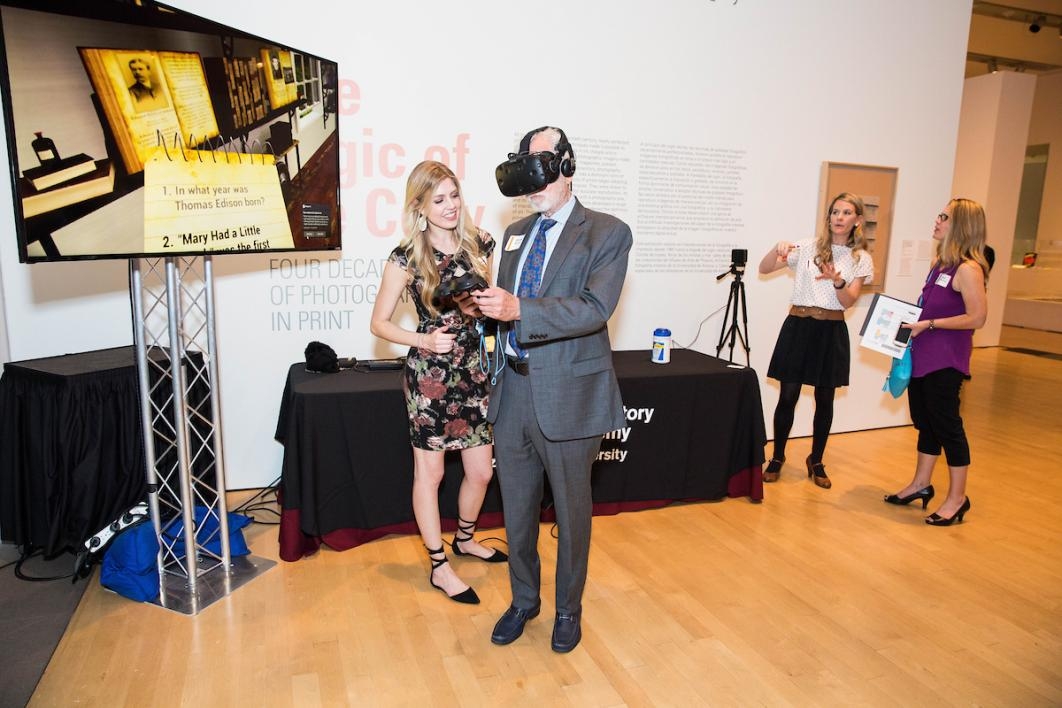 George Harris, CEO of the Pike and Susan Sullivan Foundation, tries out the ASU Prep virtual-reality experience in Thomas Edison's Menlo Park lab with the help of ASU Prep Digital's Lauren McBurnnett on Tuesday evening at the Phoenix Art Museum. 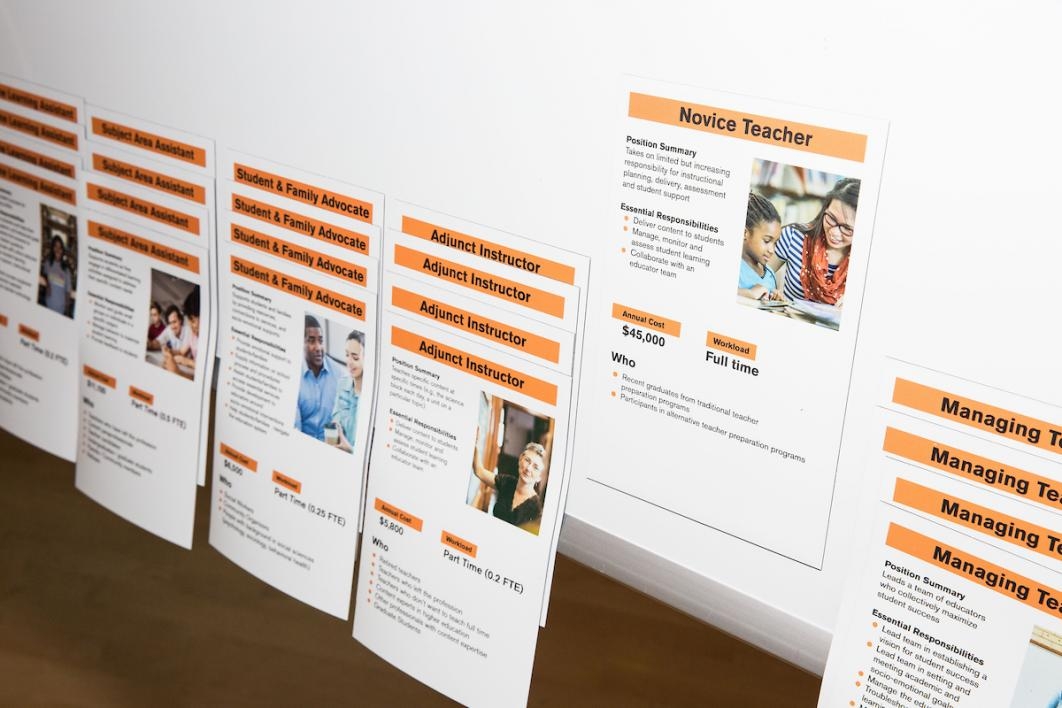 Magnets with details of the projected cost of specific educator roles help visitors understand how to create a workforce within certain budgets during the "Education by Design" event. 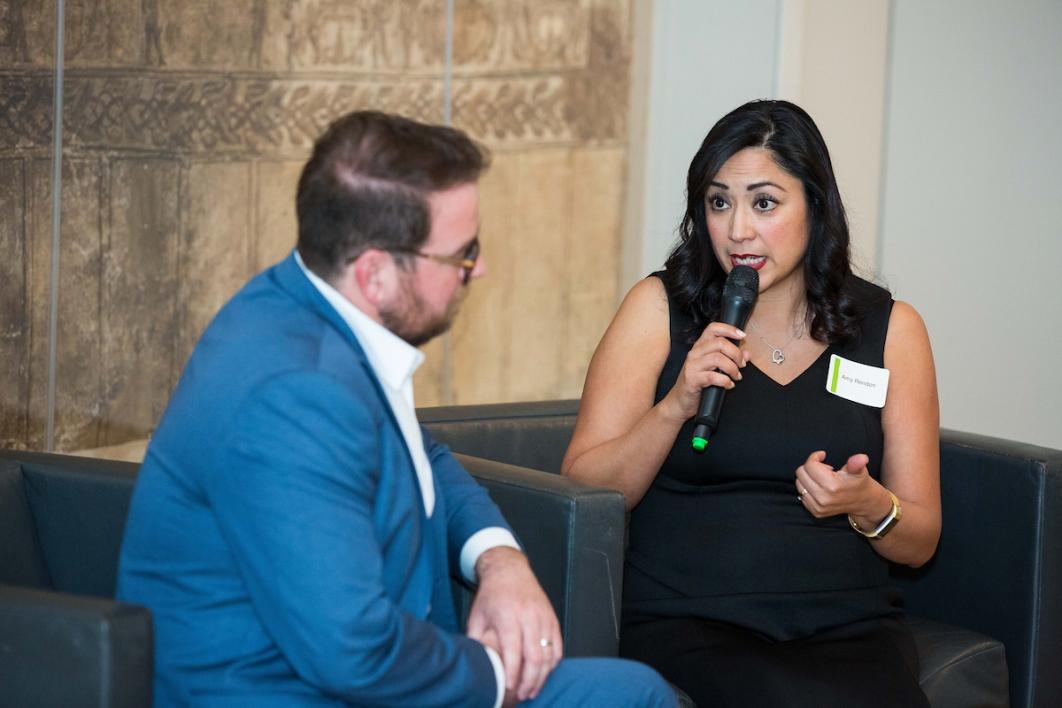 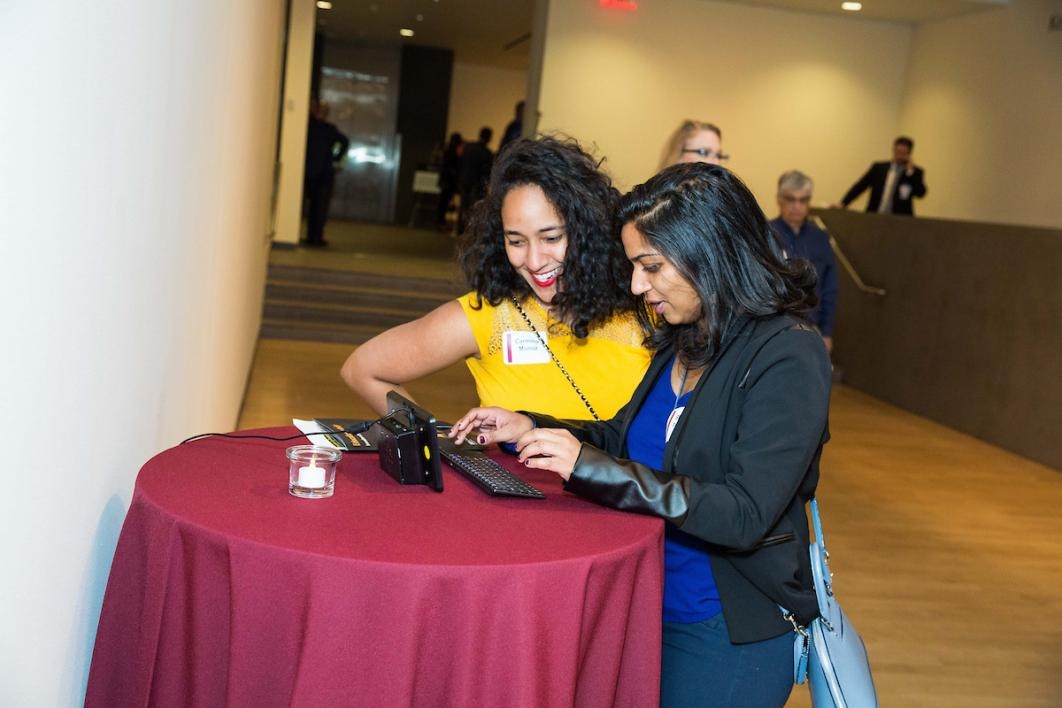 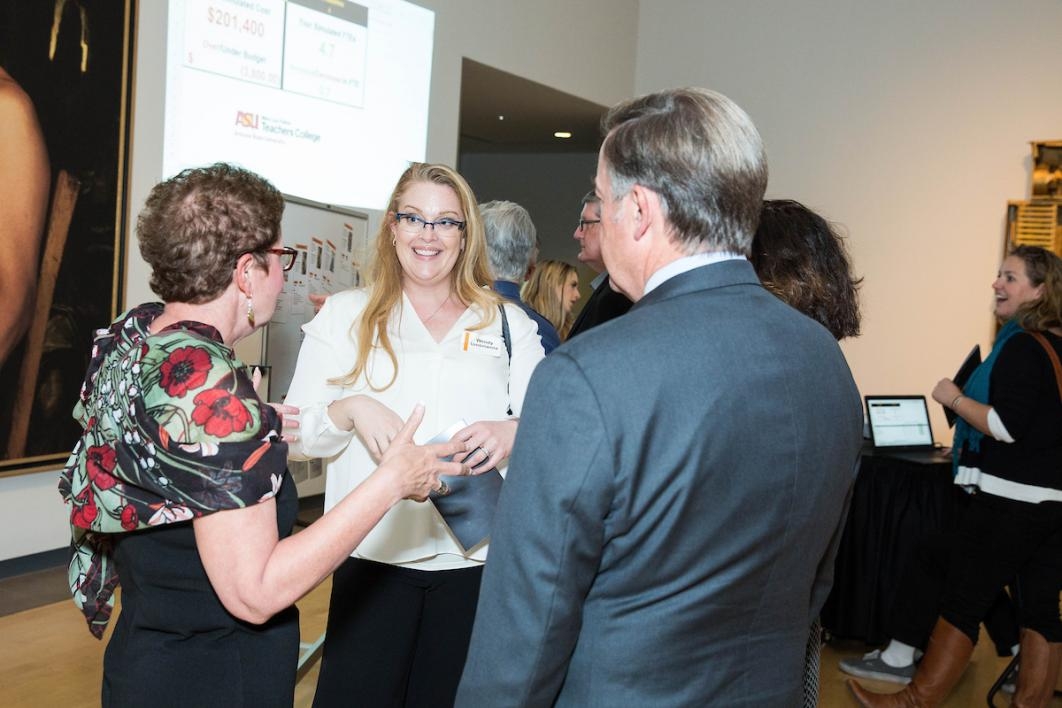 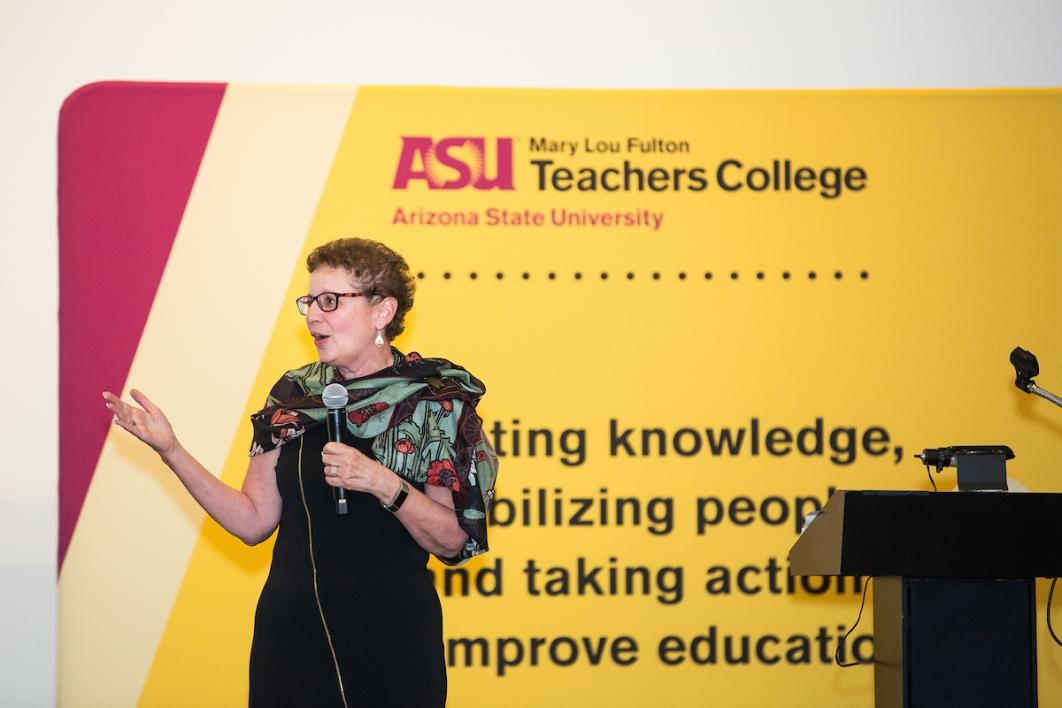 Dean Carole Basile thanks alumni, staff and invited guests for attending the "Education by Design" event Tuesday evening at the Phoenix Art Museum.

Almost 1,000 Arizona educators either abandoned their posts or resigned from their teaching positions within the first four months of the 2017–18 school year, a December report from the Arizona School Personnel Administrators Association shows.

A deep dive into the statistics paints a clearer picture: 25 percent of new Arizona teachers will leave the workforce within one year and 50 percent after three years. The state also has approximately 2,000 teaching vacancies and about 3,400 working educators who do not meet standard requirements.

“I’m amazed there are not more people that walk away because among other things, there are so many disruptions to the day for a teacher,” said Evelyn Sonell, a retired mathematics education professor who attended the Tuesday night presentation. “A new teaching model has been needed for years and years.”

And prospects aren’t improving on the collegiate level. The number of students pursuing education degrees at Arizona’s three state universities declined 18 percent between 2008 and 2016, according to statistics. Basile said the job has become unreliable and school districts are constantly scrambling to fill those positions.

Despite the grim statistics on the future of education, Basile sees hope in millennials and members of Generation Z.

She believes these two groups want the freedom to think and act creatively as individuals and in teams, and less compliance. Additionally, she said communities are rich in experienced adults who have knowledge but lack the instructional skills of career teachers, and school districts should also mine their talents. Basile said she has witnessed many former mechanics, military personnel, marketers, engineers, retailers and chefs transform into excellent educators and believes they are an untapped resource.

Basile said education leaders must design ways of attracting these skilled, committed people into schools not only as guests and visitors but as regular educators and professionals looking for “encore careers.”

Instead of relying on one person to serve as an instructor, she said, a student should be served by a team of qualified professionals much like the new integrated health-care model. Students would be led by master teachers and a tiered team of educators and volunteers who can address individual learning needs.

“We have to provide personalized learning and build models of how to deliver better education to learners and a better professional experience to educators,” Basile said.

Basile said that although most educators understand the necessity of personalized learning, institutions have not yet designed the system to deliver it well — thus the need for community design labs.

ASU is already working with 15 school districts throughout the metro Phoenix area, including Avondale, Kyrene, Madison and Washington districts, on redesigning their classrooms, building new capacity and tailoring each school to the needs of the community.

Washington Elementary School District Superintendent Paul Stanton said that 23 teachers have already abandoned their jobs in his district this year. He said ASU is helping him become more flexible and responsive and to embrace “Opportunity Culture” principles, which reach more students with a team approach.

“The approach helps us to find ways to address students’ individual needs while exposing college students to the teaching profession much earlier than in the past,” Stanton said. “This way they get more instruction and mentoring from a master teacher and are brought along at a pace where they can actually see a future in education.”

Stanton said this approach also creates a pipeline for districts to recruit young educators before they graduate college, guaranteeing them employment immediately after they receive their diploma.

Kyrene School District Superintendent Jan Vesely said the teacher shortage isn’t really an issue in her district. However, she’s interested in ASU helping her design a “school of the future” to keep her district competitive.

“Mostly this involves helping kids create playlists for personalized learning but at the same time giving them the support they need so they have a rigorous and engaging environment,” Vesely said. “Our parents also want an environment of choice, competition and excellence. So we have to show them a school that’s cutting-edge, personalized and have outcomes where their children can become successful.”

Brent Maddin, executive director for Education Workforce Initiatives for Mary Lou Fulton Teachers College, said the average cost to employ four full-time Arizona teachers is approximately $196,700. But what if that money were used more wisely and could staff more educators in the classroom?

He said the new workforce model could include a master teacher who mentors a novice instructor, an adjunct instructor, a student-and-family advocate, a subject-area assistant and a volunteer or two. It would not only be stimulating for students, who often sit for seven hours a day in the classroom listening to one person instruct, but also reinvigorate the teaching profession.

“There are so many ways we can put instructors and members of the public back into schools that we’re not thinking about,” he said. He believes it could be a business leader, a stay-at-home mom looking to get out of the house for a few hours, a senior who wants to remain active, a retired educator who wants to shift to part-time work, or education majors looking to earn cash while they learn.

“It’s a big idea,” Maddin said. “What the college is proposing will transform the field of education.”

No. 25 @SunDevilWBB Travels to Los Angeles for Games at USC and No. 8 UCLA

No. 25 @SunDevilWBB Travels to Los Angeles for Games at USC and No. 8 UCLA