After the life-altering difficulties they faced in their home countries, refugees who come to America can feel overwhelmed trying to integrate into their new communities.

Becoming economically self-sufficient is crucial for the families, and a group of Arizona State University students has stepped up to help with that.

The Global Market is a monthlong pop-up shop in the heart of downtown PhoenixThe students partnered with RED Cityscape Development, which is providing the space with the assistance of the city of Phoenix. that sells handmade goods, art and other items created by female refugees. The store is a project launched by ASU students in the Master of Social Work program who are interns in the ASU Office of Global Social Work.

The shop, directly across the street from the CityScape retail and dining complex, features items made by female entrepreneurs from Middle Eastern countries, including handmade soap, ceramics, jewelry, textiles, home decor, glass art and paintings.

“It’s a low-cost, low-risk way to get exposure for their merchandise,” said Alyaa Al-Maadeed, one of the ASU graduate students.

Al-Maadeed, who is from Qatar and earned her bachelor’s degree in social work at ASU, said she wanted to tackle a project in which her fluency in Arabic could help refugees.

“We’re trying to get them to the point where they’re engaging with the community and to feel empowered,” she said.

The students did a one-day pop-up shop in December as a pilot project to help the women understand what the event would be like.

Megan McDermott, one of the ASU students, said that the process of coming downtown to the shop and interacting with customers in English is challenging for them.

“As social workers, we have to be very aware that we’re taking them out of their comfort zone,” said McDermott, who helped the women deal with the parking garage. 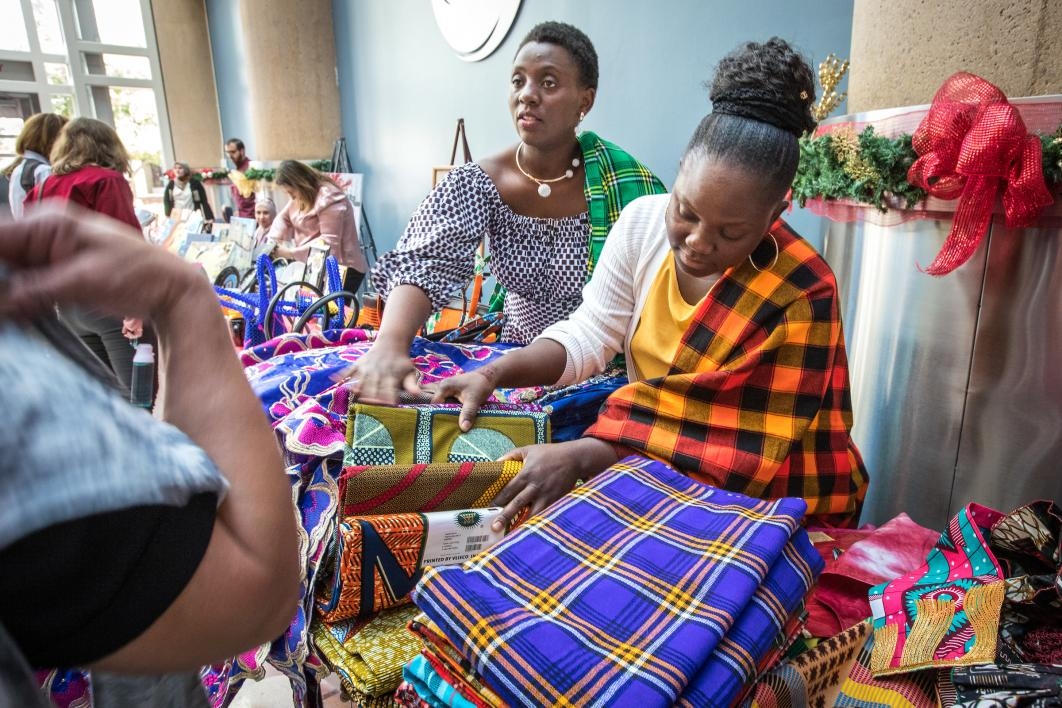 Angelique Paluku (left) and Teeneh Kiawein talk about their fabrics and crafts at the one-day pop-up Global Market held at Phoenix City Hall on Dec. 15. Paluku is from the Congo, and Kiawein came from Liberia. The December event was a pilot for the monthlong pop-up store running now. 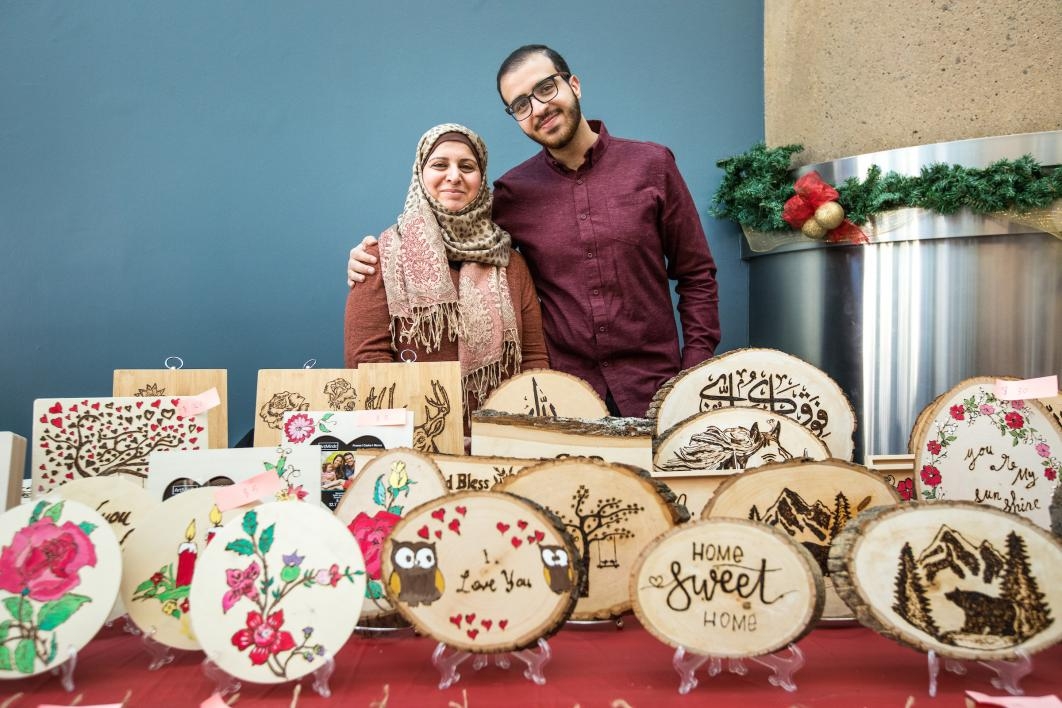 Rakad Adanan proudly stands with her son, Mohammed Al Bahadli, an ASU sophomore in medical studies, at the pop-up Global Market held at Phoenix City Hall in December. She also is participating in the monthlong pop-up shop running now in downtown Phoenix. 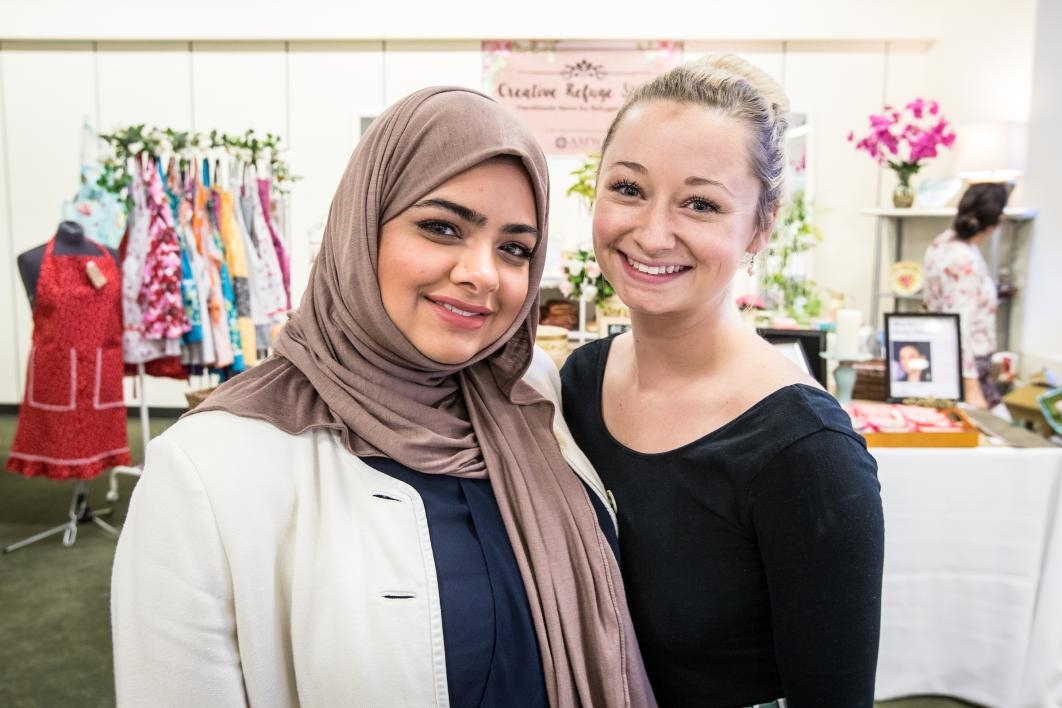 Alyaa Al-Maadeed (left) and Megan McDermott are Master of Social Work students in the College of Public Service and Community Solutions at ASU. The Global Market pop-up shop is their project for their internship in the Office of Global Social Work in the college. 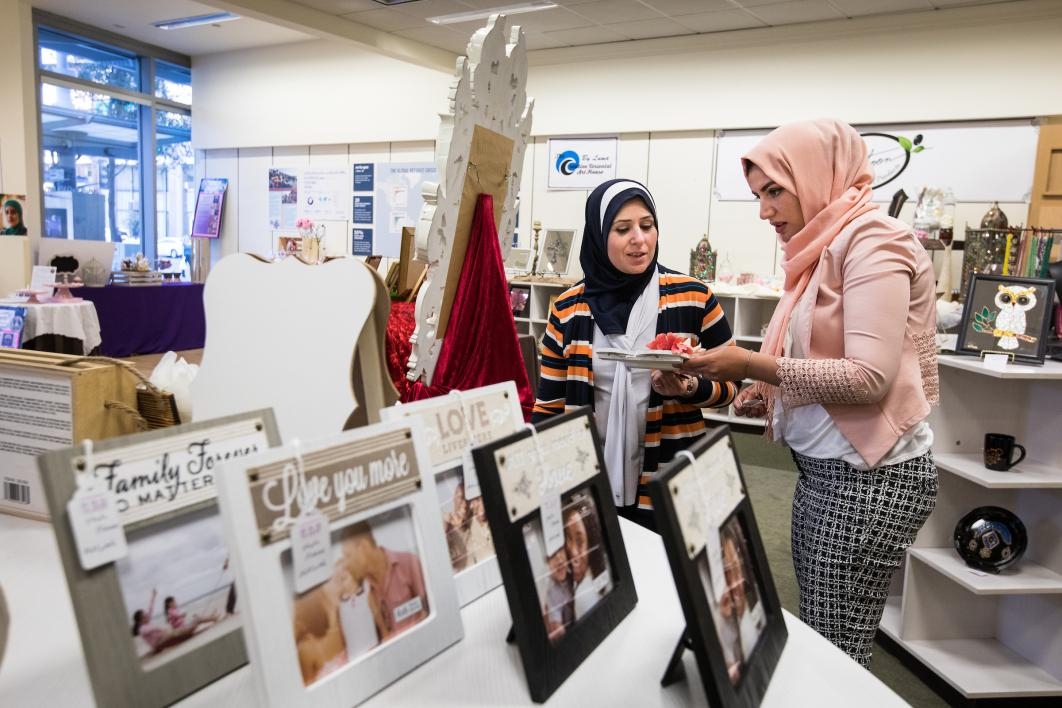 Luma Abdlubaqi (left) and Marwah Asad set up a display at the Global Market, which runs through Feb. 28. The shop is one door south of the southeastern corner of Central Avenue and Washington Street in downtown Phoenix.

ASU exercise and wellness junior Petra Morrison (right) enjoys talking with Luma Abdlubaqi, who makes artisan scents and is selling them at the Global Market pop-up shop in downtown Phoenix.

Creating a shop like this is complicated and involves dealing with a lot of people and different cultures — the exact skills the master’s program is teaching, according to Barbara Klimek, a clinical associate professor in ASU’s School of Social Work and coordinator of the MSW program.

“It takes time, and students understand the issues and the process,” Klimek said. “I’m pleased to see the energy of the students and how they want to do something good for the community and their devotion to the refugee population.”

The students are learning what “help” really means.

“It’s what we teach in social work: Take people where they are at and move them at their own pace,” said Klimek, who also is director of the Office of Global Social Work.

“You can create wonders, but you need to be creative and patient and to really find the solutions that can help those people to achieve the goal they want, which you’re helping them to do. It’s their goal, not yours.”

A previous project by students in the Office of Global Social Work included developing and training refugees on different topics, such as safety, transportation and child welfare, in a culturally appropriate way.

“They worked with the community leaders who said, ‘If you want this topic introduced, this is how you need to do it,’ “ she said.

When refugee families arrive in Phoenix, some of the women are eager to go out into the community to work, while others are less comfortable doing that. The American Muslim Women’s Association of Arizona can guide them, according to Asma Masood, the president.

“We want to provide opportunities to refugee women who don’t work outside the home, whether because they have children at home or for cultural reasons,” she said. “Some women come with skills. Other don’t have marketable skills so we teach them.”

The nonprofit organization offers English lessons, tutoring, mentoring and a yearlong program called Creative Refuge Studio that teaches the women how to sew and launch a business. Items from the studio are being sold at the Global Market pop-up, including clutches, colorful aprons, kitchen and table linens and knitwear, including hats with cat ears.

“We tell them if you want to make it here, you can do it. It just needs hard work. And many of them have done it,” Masood said.

Among the success stories is the Syrian Sweets Exchange, a cooperative of independent family bakers that formed in 2016 and is selling pastries in the Global Market.

McDermott said the sweets have been selling out every day. “Then they go home after being in the shop all day and bake at night,” she said.

One entrepreneur who has already found success but is looking for a wider customer base is photographer Marwah Asad, who has a display in the Global Market of her photographs, as well as bridal and home decor that she creates.

Asad has a degree in computer engineering, but after she emigrated from Iraq in 2012, she found that the process to become qualified in that field in the United States was expensive and difficult, so she started taking photographs.

“I’m really patient with children, so I started photographing birthday parties for my friends and they said, ‘Why don’t you make it a business rather than doing it for free?'”

“Most of the customers I’m having are from the Middle Eastern community,” she said. “I thought that being in a store downtown, everyone would be here that’s out of our society. I don’t want to be in just one corner.”

The Global Market is in a storefront shop just one door south of the southeastern corner of Washington Street and Central Avenue in Phoenix. The shop is open 10 a.m. to 6 p.m. Monday through Saturday through Feb. 28.

Top photo: ASU student Alyaa Al-Maadeed (right) looks at the pricing of some of the Syrian Sweets Exchange treats with Rodain Abozeed at the Global Market in downtown Phoenix. Photo by Charlie Leight/ASU Now

For many, studying religion at a public university may seem out of place. Studying historical cultures and ancient languages in order to learn more about your own culture? Even more so. But that’s exactly what the Jewish studies program at Arizona State University provides to students.“Students who take courses in Jewish studies enhance their understanding of their own culture, whatever it may...

For many, studying religion at a public university may seem out of place. Studying historical cultures and ancient languages in order to learn more about your own culture? Even more so. But that’s exactly what the Jewish studies program at Arizona State University provides to students.

“Students who take courses in Jewish studies enhance their understanding of their own culture, whatever it may be,” said Hava Tirosh-Samuelson, director of the Jewish studies program and the Center for Jewish Studies at ASU. “The study of Jews and Judaism enhances tolerance, which is necessary for a thriving democracy.” 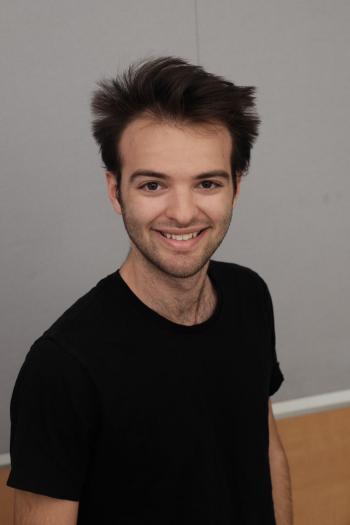 Hal Danesh is one of many students in the Jewish Studies program in the College of Liberal Arts and Sciences, where faculty and students work together to promote diversity and lifelong learning. Download Full Image

In 1978, the certificate in Jewish studies was established in the College of Liberal Arts and Sciences as one of the many programs offered at ASU that uses interdisciplinary scholarship to educate students in critical thinking and prepare them for a wide range of careers.

The program, which goes beyond a mere ethnic-studies framework, covers a wide array of perspectives about Jewish history, religion and culture that allow students of numerous upbringings and persuasions to explore the complexity of Jewish history and its relationships with surrounding religions and cultures.

“Students encounter an extremely rich and multifaceted culture,” said Francoise Mirguet, professor of Jewish studies in the School of International Letters and Cultures. “They encounter the opinions of very diverse thinkers — some who seek continuity with foundational texts; some who make radical innovations; and even some who question their own tradition.”

In 2009, a Bachelor of Arts degree in Jewish studies was established. Graduates go on to work in fields such as law, economics, education, medicine, politics and social work. For students looking to enter the Jewish community after graduation, the program helps them prepare for positions such as rabbis, cantors, teachers and community leaders.

Many students pair the Jewish studies degree with another major. One such is Hal Danesh, a sophomore majoring in history and Jewish studies, who found his niche in the program.

“Halfway through the fall semester of my sophomore year, I discovered my passion for Jewish history,” Danesh said. “It is my goal to eventually become a professor to teach and do research in Jewish studies.”

In a program designed for a diverse spectrum of interests, courses are available and relevant to numerous aspects of life and are intended to instill curiosity and the desire to learn in its students.

“The Jewish tradition is committed to lifelong learning,” Tirosh-Samuelson said. “It highlights the significance of reading and interpretation, and it trains a person to be intellectually inquisitive and committed to the acquisition of knowledge and wisdom.”

Danesh emphasizes the large amount of resources available to students, making the relatively small program a venue for endless learning and opportunity to connect with students and faculty on a more personal level.

“One of my favorite aspects about the program is that students get to know the faculty and learn from them outside of the classroom,” Danesh said. “Professors are eager to see their students succeed, and they’ve given me a lot of advice.”

The program strives to create a diverse and welcoming environment for students and faculty of all backgrounds, and Mirguet emphasizes that the Jewish Studies program is where everyone can learn to recognize the importance of appreciating the intricacies of all human cultures.

“In Jewish studies, students learn about human experience in all its subtlety,” Mirguet said. “Humanity lies at the intersection of trauma and survival, continuity and transformation, sense of self and openness to others.”