At 8 p.m. Eastern Standard Time on Aug. 9, 2016, millions tuned into NBC to watch the U.S. women’s gymnastics team go for the gold at the Rio Olympics.

NBC had packaged the primetime event for maximum drama, but it was all for naught, thanks to the Internet and social media. The tape-delayed event had been spoiled for many viewers earlier in the day.

In response, the network announced that it would abandon the decades-old practice of airing events on a tape delay for the Winter Olympics in Pyeongchang, South Korea in hopes of quelling spoiler alerts, delivering immediacy to sporting events and maintaining ratings. ASU Now spoke to Brett Kurland, director of Sports Programs at the Walter Cronkite School of Journalism and Mass Communication, about the new development and what it means for viewers. 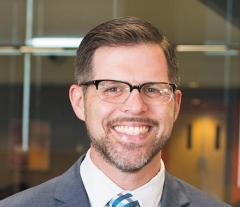 Question: NBC said the Olympics TV time-delay, which was one of the biggest complaints about the 2016 Rio Olympics, will be going away. Was the rise of social media the inevitable cause of this change? Or is it because Pyeongchang is a 13-hour difference?

Answer: From what I’ve read, the median age of NBC’s Summer Olympic prime-time television audience has been steadily rising since the Sydney Games in 2000, while ratings have been on the decline, so it would make sense that NBC is trying something different in trying to grow their audience and attract younger viewers. So I think this live move is a natural progression, driven by the immediate availability online of infinite amounts of information, and the real-time dialogue about events on social media as these events play out.

Q: With the increased ability to watch events live, do you think NBC will have any trouble creating the narratives and dramatic tension their primetime Olympics coverage is usually filled with?

A: One of the things that NBC has done such a fantastic job of in their Olympic coverage is really making the audience care about these athletes. The storytelling, the backstories and the features are excellent. They make viewers really root for athletes they might not have otherwise known anything about, or even watch sports they might have otherwise cared about. The people who enjoy this in-depth storytelling should still be able to experience that. The difference is now the people who are more focused on the raw action and results can see it play out immediately. I don’t think they are mutually exclusive.

Q: Given that the finals of many high-profile events will be broadcast live during the day, what do you think the effect will be on NBC’s primetime ratings?

A: I believe it will be available to view at the time it occurs, but will also be packaged for primetime. I’m very curious to see how it unfolds and how it will be consumed. Let’s say it’s 6 a.m. on a Friday and you’re somebody who is getting up to go to work at that time or getting your kids off to school. You probably will not be able to watch it live and might instead tune in to the primetime coverage. But for somebody who has the time and wants to watch it as it happens, it’s there for them. And, that person may also return for the primetime coverage. Again, I don’t know that they are mutually exclusive. If people watch it live during the day, will they not watch it at night? The Olympics are not a typical sporting event, so I think viewing patterns are different.

Q: Is there a potential downside to covering the event live as it happens?

A: We’ll see. Could it hurt the primetime events? Maybe. Every Olympics there’s been this drumbeat of complaining about tape delay. It has become a bit of a broken record. So now audiences are being given what they’ve asked for, so let’s see how it goes.

Q: What are some highlights and events to watch for?

A: There certainly is intrigue regarding North and South Korea marching together at the Opening Ceremony and fielding a joint women’s ice hockey team.

Russia’s historically been one of the United States’ chief rivals when it comes to medal counts. But Russia was banned from these games following doping allegations. Some athletes from Russia will still compete, but as neutral athletes. There will be no Russian flag and no Russian national anthem.

This will be the first Winter Olympics since 1994 that does not include NHL players. So men’s hockey will be something to watch.

The Olympics has this wonderful way of taking athletes we may never have heard of and making them stars because of some amazing thing they accomplished. It brings a spotlight to incredible athletes, that for the most part, (they) rarely otherwise receive. Some of them become household names: Bonnie Blair, Dan Jansen, Sara Hughes, Michelle Kwan. And then there’s Nancy Kerrigan and Tonya Harding — but that’s another conversation …

A program created to cultivate emerging leaders as a force against climate change has chosen ASU student Kayla Kutter, who is pursuing concurrent master’s degrees, as one of its scholars. The Energy Scholar program was formed through a partnership between the nonprofit Net Impact, and the companies 3Degrees and OneEnergy Renewables, to foster graduate students and early career scholars focused o...

A program created to cultivate emerging leaders as a force against climate change has chosen ASU student Kayla Kutter, who is pursuing concurrent master’s degrees, as one of its scholars.

The Energy Scholar program was formed through a partnership between the nonprofit Net Impact, and the companies 3Degrees and OneEnergy Renewables, to foster graduate students and early career scholars focused on renewable energy. The scholars will be provided with networking opportunities, mentoring and industry access. 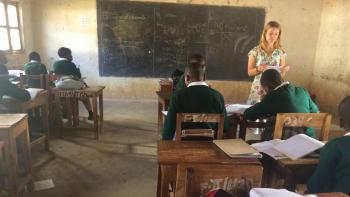 Kayla Kutter worked as a secondary education teacher with the Peace Corps in Tanzania.

Kutter’s focus is on what has been dubbed as an “energy trilemma” comprising energy security, energy equity, and environmental stability. She aims to concentrate on the complex links between public and private actors, governments and regulators, economic and social factors, national resources, environmental concerns, and individual behaviors.

Kutter said she looks forward to gaining insights through industry access opportunities with One Energy and 3Degrees, which are both certified B Corps with goals of connecting people to renewable energy on a large scale.

In the School for the Future of Innovation in Society’s Master of Science and Technology Policy program Kutter learned there is more to fostering change than simply developing new technologies.

“It’s about the people you affect and how change is implemented,” she said. “Policy and understanding social impacts of the technology are equally important to the development of clean energy technologies.” She looks forward to expanding her knowledge on policy development, history of technological development, and social impacts while in the program. With backgrounds in math and physics, Kutter, is also enrolled in the Master of Sustainability Solutions program in the School of Sustainability and noted in her bio for the Energy Scholars program that “sustainability is more about people than anything else.”

An active member in her sorority, Kappa Kappa Gamma, Kutter was awarded Greek Woman of the Year in 2014 before graduating from the University of New Mexico with her Bachelor’s degree in Applied Mathematics. After graduation, she went on to serve as a secondary education teacher with the Peace Corps in Tanzania. She is currently working as a sustainable solutions campus coordinator on an ASU research project related to eliminating unnecessary hot water use on campus.

Regarding plans for the future, Kutter said, “I want to use my experiences to work on microgrid electrification systems, which rely on renewable energy. I would like to learn all that I can from the Energy Scholar program and hopefully begin my career next year in the field of clean energy production and implementation.”

School for the Future of Innovation in Society Student life Student