It almost sounds like the start of a joke: How do you get a staunch Republican and a left-leaning Democrat to have a civil conversation about Arizona politics? Sit ’em down for a meal.

“It’s hard to be uncivil when you’re having a meal with someone,” said Neal A. Lester, founding director of Arizona State University's Project Humanities and Foundation Professor of English. “Bringing people together around a meal has the potential to make conversation easier to have, especially surrounding politics.”

Project Humanities is hosting “Aridity and the Desert: Politics and Politicians,” part of a new community engagement series that brings together diverse individuals to discuss tough topics in an engaging and thoughtful way. The Feb. 1 event is the second installment of the series and part of the initiative’s spring 2018 programming for its ongoing campaign, “Humanity 101: Creating a Movement.” The dinner and dialogue start at 6 p.m. at Valley Bar, 130 N. Central Ave., Phoenix.

The award-winning initiative brings together individuals and communities from around Arizona to instill knowledge in humanities study, research and humanist thought. Project Humanities facilitates conversations across diverse communities to build understanding through talking, listening and connecting.

Lester said that “Aridity and the Desert” was born out of the idea that people have been taught to avoid discussions on potentially controversial topics such as religion and politics, which has led to a general lack of understanding of people with different backgrounds who hold opposite beliefs.

“A lot of folks who come to our university programming are pretty liberal and mostly politically progressive,” Lester said. “Our challenge especially for this event has been how to we get those with more conservative values and perspectives to come to our programs and not feel like they’re under attack or have to defend their positions?”

Breaking bread is a good start, said Jennifer Linde, a senior lecturer at ASU’s Hugh Downs School of Human Communication and a facilitator for Civil Dialogue, a structured format for public dialogue used to foster civil communication when discussing tough or controversial topics.

“The thing that food does as a cultural ritual is to give us space to see the other person as a human being,” said Linde, who will facilitate the Feb. 1 event. She added that Arizona is historically a conservative state and tends to give more voice to that perspective. Conversely, she said universities like ASU tend to drown out conservative voices.

Linde also believes that national and local elections and social media can be polarizing and divisive, especially when people feel they can attack anonymously.

“There’s been incivility on both ends of the political spectrum,” said Linde, referring to the 2016 presidential election. “We have to balance that out.”

In a civil dialogue session, volunteer participants consider a provocative statement and have the opportunity to take a position on the statement ranging from “agree strongly” to “disagree strongly.” Participants are asked to follow guidelines for civility that are explained by Linde.

The dialogue is then extended to the broader audience who are encouraged to respond with their own opinions and questions. Participants then continue their dialogue while dining.

Miguel Fernandez, a literature and technology professor at Chandler-Gilbert Community College who participated in a similar “Aridity” event in November, said the power of food is not to be underestimated.

“We all eat and we all have our opinions,” Fernandez said. “It was a nice buffer that a standard ice-breaker wouldn’t be. That helped the conversation about Arizona, place and identity be more honest.”

Project Humanities will host the third installment, “Aridity and the Desert: Pride and Prejudice (Intersectionality within LGBTQIA+ Communities),” on Feb. 20.

The night before Ira A. Fulton Schools of Engineering's E2 camp in the summer of 2017, biomedical engineering senior Scott Boege opened an email to discover the national Biomedical Engineering Society (BMES) had announced Arizona State University’s local chapter was the winner of the Commendable Achievement Award, marking it as one of the best chapters in the nation.“I was elated to know tha...

The night before Ira A. Fulton Schools of Engineering's E2 camp in the summer of 2017, biomedical engineering senior Scott Boege opened an email to discover the national Biomedical Engineering Society (BMES) had announced Arizona State University’s local chapter was the winner of the Commendable Achievement Award, marking it as one of the best chapters in the nation.

“I was elated to know that all of the hard work that we put in during the previous year was worth it,” said Boege, current vice president for the chapter. “Our success would not be possible without the progress made in the years prior.” 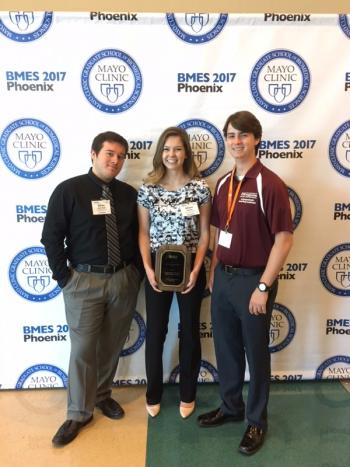 BMES is a professional society for biomedical engineering students that aims to foster interest in the field while also providing academic and career opportunities for its members. The Commendable Achievement Award recognizes the ASU chapter for its activities, outreach and impact over the past year. This was the first time the organization recognized the chapter at a national level.

Allison Marley was president during the recognized 2016–17 academic year.

“Much of my college career was spent organizing and running events for BMES,” Marley said. “It felt pretty great to receive recognition for all of the hard work we had been putting into the club.”

Sarah Stabenfeldt, faculty advisor for the chapter, praised the students' commitment to the group.

The organization was formally recognized at the BMES Annual Meeting on Oct. 14, 2017, in Phoenix.

During the conference, the ASU chapter leadership also discussed their operations at an Outstanding Chapter presentation, where BMES members could learn how other chapters were successfully run.

“During our presentation at the conference, a student from another university's chapter asked us how to get faculty involved at their events,” Boege said. “This is something we take for granted since we have a plethora of unique and engaging faculty members who love to talk at our events.”

Faculty, industry professionals and alumni are featured as guest speakers during meetings.

“Some alumni from the program have ended up becoming speakers at our meetings, which continues on the cycle,” said Ethan Marschall, the current chapter president.

Due to the chapter’s central location in Tempe, Arizona, the organization has the ability to tour places such as Mayo Clinic and Stryker. BMES brings in guest speakers from a wide variety of backgrounds, such as neurosurgeons from Barrow Neurological Institute and engineers from biomedical companies such as Medtronic. The organization also pairs each industry speaker with a faculty member from the School of Biological and Health Systems Engineering, one of the six Ira A. Fulton Schools of Engineering.

“We'll do pretty much everything from the incredibly professional speakers, mixers and tours, to a fun barbecue with another student organization,” Marschall said.

BMES also goes to local schools; they presented to 10 different classes last year. The organization actively participates in ASU events such as ASU Open Door and volunteers at Project C.U.R.E., a local nonprofit.

With a new academic year in progress, BMES members continue to push the impact of their chapter, motivated by the national recognition.

“There were so many schools and student chapters that I just never expected it to happen,” Marschall said. “But it did happen, and we hope to keep the momentum going with even more programming going on for local members this year.”