Update: Venita Blackburn was named a finalist for the PEN America Literary Awards on Jan. 25.

Most people who pursue a degree in liberal arts and humanities have probably been asked why or what they intend to do with such a degree. Arizona State University alumna Venita Blackburn proves these majors go above and beyond all expectations. 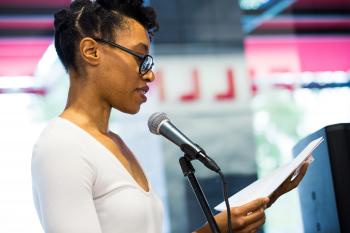 “Writing really felt like something I could enjoy doing and I was willing to commit to it for a while. Figuring out my path, alone, was a big deal,” said Blackburn, a current instructor at the university. “I was notorious for quitting and changing majors. I’ve always been artistic and I just had an inclination that fiction was the one.”

In 2008, Blackburn received her Master of Fine Arts in creative writing from the Department of English, a unit in the College of Liberal Arts and Sciences. She had the opportunity to work with Aimee Bender, a novelist and short-story writer, during her undergraduate studies. Blackburn was so inspired that she decided to apply for ASU’s competitive master's degree program.

“I applied for the MFA in creative writing and I got in,” Blackburn said. “I wanted to be a writer, I wasn’t sure what kind of stories, but I had some stories to tell. They give you training to be a teacher and turns out I liked it, so I kept going and stuck around and I’ve been here ever since.”

Upon completing her degree, Blackburn decided to continue teaching at the college level. She worked at community colleges in the greater Phoenix area until she was hired as a full-time instructor for Arizona State University’s Downtown Phoenix campus, where she has been for the last five years.

“I’m always teaching various forms of creative writing and English in different formats, whether it’s online or in-person or advanced or intermediate or beginners,” Blackburn said. “It’s been really great. I’m always really appreciative when I get those rare students who have insight, will and commitment to language and the work. That’s always really fulfilling.”

While Blackburn was teaching, she noticed students were excited to get involved outside of the classroom. She started a community writing group called “Live, Write” for people with interest in works dealing with communities of color. The group is open to the entire community as it recognizes the distinctions and particular areas of concern communities of color face.

“I had a lot of students going through my class who were struggling with race and the perception of it in their work and they were sort of uncomfortable with a lot of the comments being made in some of the workshops,” Blackburn said. “Instead of just directing my students to specific workshops that were designed for just that, I decided to start one here.”

In the midst of teaching at both the university and within the community, Blackburn has also found time to continue practicing her passion for writing. Her first collection of short stories, “Black Jesus and Other Superheroes,” was published this fall. Her collection won the Prairie Schooner Book Prize last year and was announced on the PEN America Literary Awards Longlist for the Robert W. Bingham Prize for Debut Fiction.

“I was writing all these stories about people who had unusual powers, super powers in a way,” Blackburn said. “Some of them obvious and others more internal, but it was about how these powers are not so much a gift, but something that has to be coped with and managed more than anything. I think it was a metaphor for this life in general. How we all have these different abilities, and sometimes disabilities, that people don’t recognize the true value of them if we’re limited in our thoughts. So that became a theme for it.”

Blackburn’s success is just beginning. She is continuing to work on her writing while educating young writers within the university and community.

“For new people starting out, I highly recommend they try everything,” Blackburn said. “There are a lot of different avenues. Be exposed to different kinds of groups, go to conferences, residencies all over the nation and potentially the world, if you can. There are a lot of opportunities, and just take them all.”

The complex network of signals in the human brain make us capable of amazing athletic feats and innovative ideas, but they can also cause debilitating problems such as seizures. Advances in brain implant technology can help us better understand and monitor the brain’s signals and give hope to a better future for the treatment of neurological disorders.Junseok Chae wants to use his expertise of m...

The complex network of signals in the human brain make us capable of amazing athletic feats and innovative ideas, but they can also cause debilitating problems such as seizures. Advances in brain implant technology can help us better understand and monitor the brain’s signals and give hope to a better future for the treatment of neurological disorders.

Junseok Chae wants to use his expertise of microdevices to help people with neurological disorders through wireless, passive neural recorders — safety-minded brain implants. He believes current wired, battery-powered or energy harvesting implant technologies don’t meet the threshold of safety that patients deserve — and that he has a solution. 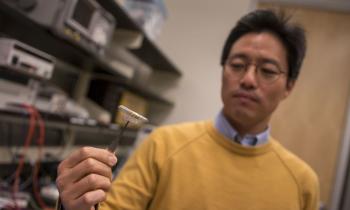 The Arizona State University Ira A. Fulton Schools of Engineering electrical engineering professor and associate dean for research is working to design and test a new kind of brain implant with researchers at Ohio State University and Florida International University that he hopes could one day help people who have neurological disorders such as seizures related to Parkinson’s disease.

Chae is leading the effort to build the implant prototype while his research partners test its accuracy and effectiveness in measuring brain signals.

This interdisciplinary team — whose expertise covers electrical engineering as well as signal processing and social and behavioral science — behind the project, “Fully passive and wireless multichannel neural recording for chronic in-vivo studies in animals” recently earned its latest three-year, nearly $850,000 award from the National Science Foundation.

A safer way to monitor the brain

Think of a tranquil ocean — teeming with life and activity under the surface, but seemingly calm above. What’s underwater tends to stay undetected as we look from above the surface. The brain’s activity can be similarly opaque. Brain signals are rather isolated inside our heads as the scalp, skull, and the water content, called cerebrospinal fluid, in the brain significantly attenuate, or reduce, signals from outside getting in to detect what’s going on inside.

Electroencephalogram, or EEG, technology can get through those barriers from the outside for the strongest of signals — like the sight of a whale swimming just below the ocean's surface. While good for some applications, implants are needed to detect weaker signals blocked by the brain’s outer protective layers, just as one needs to get in the water to see smaller fish. 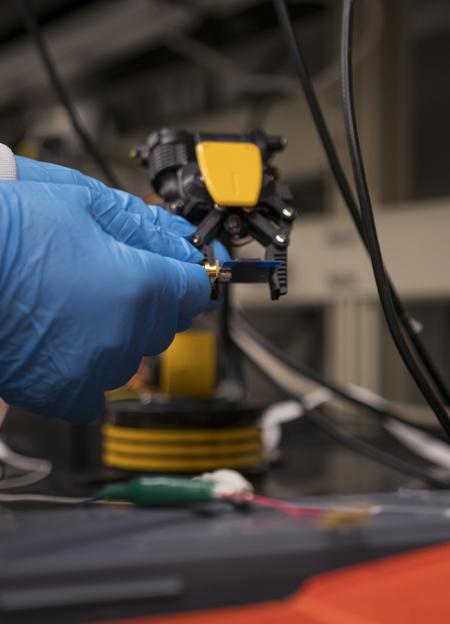 However, putting an implant in the brain currently poses many risks for a patient. Most brain implants today incorporate wires and cables to route the brain signal outside. Many research reports propose battery-powered implants to avoid wires and cables, and the battery is often located outside a patient’s head, inside the skull or under the scalp. This positioning still exposes inner tissues in a way that can lead to serious infection.

“The problem is, if a battery leaks it’s not easy to replace — who wants to go through open skull surgery just because of a battery?” Chae said.

Chae is working on a wireless design that involves fully isolated, fully passive parts so there are no points of electronics-associated failure in the implanted device.

“You don’t want to use an implant unless you have to, but when you do, wireless, fully passive [implants] shine,” Chae said. “We want to have a self-contained unit inside the skull without wires coming out or failure sources inside the brain.”

This type of device relays brain signals similar to how sonar in a fishing boat sends acoustic waves into the ocean that reflect back the presence of fish and other underwater objects.

The 4 mm x 12 mm x 0.2 mm implant design uses an external antenna that emits electromagnetic waves — the same as a mobile phone — to a tiny antenna on the implanted device. A small electronic device on the implant called a varactor then combines the incoming electromagnetic signal with brain signal and reflects both back to the external antenna in a process called backscattering.

Having a passive, wireless device in the brain helps keep complex electronics on the outside where they don’t pose a safety risk.

“I can make a complicated and humongous system outside the brain, not a problem — if that fails, it’s fine, I can fix it,” Chae said. “I just don’t want to have any complex things inside the brain.”

Backscattering is not a powered method of signal collection — it’s just a reflection of the signal that attenuates, or weakens, as it travels through the brain’s protective layers — so the device does lose some signal quality.

Chae believes the increased safety makes the compromise in performance worth it for certain applications, like seizure detection for people with Parkinson’s disease where the signals are strong enough to be detected by this wireless fully passive technology.

While such technology is likely decades away from use in humans, Chae has high hopes for what it could do to help people with neurological disorders regain their daily routines.

The external part of the system Chae speculates can be embedded in a baseball cap or clothing to conceal it, and has the potential to also deliver electrical stimulation to dampen some of the neurological disorder symptoms based on the brain signals detected.

All these wireless and fully passive electronics are useless without the knowledge of what brain signals mean from researchers at OSU and FIU, Chae said.

Chae will lead the design of the implant’s biotelemetry, antenna and device, as well as manufacturing the implant prototype using micro electrical mechanical system, or MEMS, technology at ASU’s NanoFab facility, while his academic partners at OSU and FIU lead the testing to move the implant’s new capabilities beyond the theoretical to the experimental in animal models.

“If you don’t understand what the brain signal is for, it’s useless,” Chae said. “Without such collaboration [with OSU and FIU], the importance of the device and the telemetry and the system cannot be verified or validated.”

Building on a strong foundation

Chae has had previous success in this area with previous awards from NSF, National Institutes of Health and NASA for projects advancing innovative neurotechnologies. Five years ago, Chae earned $2 million in funding from the NSF smart-connected health program on studying single-channel wireless fully passive neural recorders. This single-channel recorder study resulted in a robust and reproducible neural recording system and protocol.

Chae’s believes his work to create a new type of medical telemetry device is why the NSF continues to show interest in his research.

“Very few wireless fully passive biotelemetry exists,” Chae said. “People have studied wireless ‘passive’ telemetry in the past, which does not have a battery, yet the active electronics on the implant require active power, which is supplied externally, such as inductive coupling.”

The reason very little wireless fully passive technology exists, Chae said, is due to a few key reasons. The dense and complex circuitry on the implant is prone to failure and requires that the external and internal implant be aligned precisely in order for it to work. Scaling the device down to a small implant is also difficult, as effective power transfer requires the implant to be relatively large.

However, Chae is hopeful the work his team has done so far and the developments they hope to achieve will help overcome these challenges as they continue their funded research.