Founder of Discount Tire impacted many across the university

Arizona State University lost one of its most generous supporters last week with the death of Bruce Halle, who built Discount Tire from one small showroom in Ann Arbor, Michigan, in 1960 into one of the most successful independent tire dealerships in the industry’s history.

Strong advocates for social justice, higher education, health and medical initiatives and the arts, Halle and his wife, Diane, have channeled their generosity to a range of ASU initiatives since 1985. Their most recent gift supported the newly constructed Herberger Young Scholars Academy, a unique learning environment for gifted children at the ASU West campus. 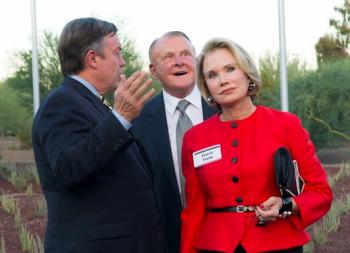 ASU President Michael M. Crow opens the exhibit "ASU Skyspace: Air Apparent," with Bruce and Diane Halle in 2012. Bruce Halle, the founder of Discount Tire who died last week at 87, was one of ASU’s most generous supporters. Download Full Image

But his generosity, like his interests and passions, spanned many fields and impacted many individual lives.

“Bruce and Diane’s impact reaches all across Arizona State University,” ASU President Michael M. Crow said. “Bruce believed in the power of personal involvement as a way to elevate lives, whether with the employees of his company or students here at ASU. His support included important health initiatives through ASU’s partnership with the Mayo Clinic, championing the Herberger Institute for Design and the Arts, and empowering veterans through scholarships. Bruce’s generosity changed the lives of many, many people.”

The Halles directed their generosity to ASU programs that deal with education; health care and health care research; the arts, including the Herberger Institute and the ASU Art Museum; scholarships, including those for veterans; and business education.

What stands out about Bruce Halle’s generosity is his deep concern for the individual, said Gretchen Buhlig, CEO of the ASU Foundation.

“Bruce had an enormously inspiring, up-from-the bootstraps story,” Buhlig said. “One thing that stands out is how deeply he cared for the people he hired at Discount Tire — he was fiercely devoted to his employees.”

“He brought the same care and concern to his partnerships at Arizona State University," she said. "He cared about the individual, and his and Diane’s history here reflects that. We are deeply grateful that he saw ASU as a place where he could make a difference, and that he believed in and supported the mission of the university."

Bruce and Diane’s long history at ASU allowed them to aid the transition between ASU’s previous president, Lattie Coor, with whom they also cultivated a strong relationship, and ASU’s current president Michael Crow and his wife, Sybil Francis, when they arrived at ASU in 2002, she said.

“Bruce and Diane were an important bridge,” Buhlig said. “They welcomed Dr. Crow and Sybil Francis and connected them to the community. Bruce was the kind of person who brought people together for the greater good. We will all miss that about him.”

When Halle started Discount Tire, he rented a small shop and had only six tires. He did everything —changed tires, kept the books, painted the signs and even cleaned the bathrooms. Today, Discount Tire operates more than 975 company-owned stores and employs more than 18,000 people.

In 2002, he and Diane established the Diane & Bruce Halle Foundation to focus their giving on gifts that have deep impact. They also established programs through Discount Tire that enable executive employees to make high-impact gifts in their regions.

Strong supporters of the arts, particularly through Diane’s passion for Latin American art, Bruce and Diane gave generously to the ASU Art Museum, the ASU School of Art, and the Herberger Institute, as well as to scholarship and visiting artist programs that impacted individual students and artists.

“Bruce Halle’s impact will be felt through the arts community for years to come,” said Steven Tepper, dean of the Herberger Institute. “He and Diane devoted themselves to arts and design, to bringing exhibits to the public, to the student-artist experience through scholarships and residencies, and more. They were passionate about making sure the general public had access to great art, as evidenced by their support for James Turrell’s ‘ASU Skyspace: Air Apparent’ and the adjacent Diane and Bruce Halle Skyspace Garden near Rural and Terrace roads. We will be forever grateful for their generosity of spirit.”

Deeply personal in their giving, the Halles recently gave a gift to support the Mayo Medical School — Arizona Campus and its collaboration with ASU. At the time, they said the partnership supports a medical education that incorporates the science of health care delivery and offers the opportunity for a master’s degree.

Journalists and media professionals from around the globe will share their perspectives on major international issues as part of an annual speaker series at Arizona State University’s Walter Cronkite School of Journalism and Mass Communication.“Cronkite Global Conversations” features members of the school’s Hubert H. Humphrey Fellowship Program, a U.S. State Department-funded initiative th...

Cronkite Global Conversations feature 12 media professionals from around the world

Journalists and media professionals from around the globe will share their perspectives on major international issues as part of an annual speaker series at Arizona State University’s Walter Cronkite School of Journalism and Mass Communication. 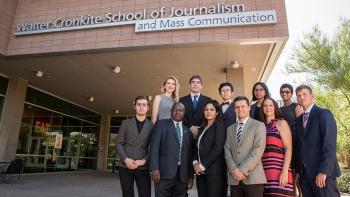 The series kicks off Jan. 24 with a discussion on the global refugee crisis and ends Feb. 28 with a talk on governments at war with the media. Other topics cover Russia’s influence in Eastern and Central Europe and the explosive growth of China and India.

“‘Cronkite Global Conversations’ spotlights important ongoing global issues that can get overshadowed by breaking news,” said Assistant Dean B. William Silcock, director of Cronkite Global Initiatives. “We’re excited to hear from our outstanding fellows and encourage you to participate in these talks.”

The hourlong “Cronkite Global Conversations” are open to the public. Sessions begin at noon on select Wednesdays through February. They are held in room 444 on the fourth floor of the Cronkite School on the ASU Downtown Phoenix campus.

The global refugee crisis has displaced tens of millions of people. Ahmed Elashry, who served on communications teams of three Egyptian prime ministers; Marina Ridjic, a leading journalist from Bosnia and Herzegovina; Kazi Mohua, a prime-time news anchor from Bangladesh; and Paul Udoto Nyongesa, a communications expert from Kenya, share their perspectives on refugee and migration issues.

Feb. 7: “Powerhouses of the East: India and China”

With large populations and booming economies, China and India are becoming major influencers on the global stage. Xiaofeng Wang, a veteran journalist from China, and Kiran Somvanshi, who manages the research bureau at The Economic Times in India, discuss the future of the East and how the two countries can work together to promote regional prosperity and stability.

Feb. 14: “The Kremlin’s Influence in Central and Eastern Europe”

Eastern Europe has long complained about meddling by Russia. Veteran journalists Mila Moralic from Croatia, Holger Roonema from Estonia, and Szabolcs Panyi from Hungary present eye-opening cases of Russian interference in their countries and share what the U.S. can learn from their experiences.

Feb. 28: “Governments at War with the Media”

Attacks on the press extend far beyond the White House. Global journalists Daneel Knoetze from South Africa, Bopha Phorn from Cambodia, and Martín Aguirre from Uruguay share their experiences and important lessons on covering governments that are hostile toward journalists.