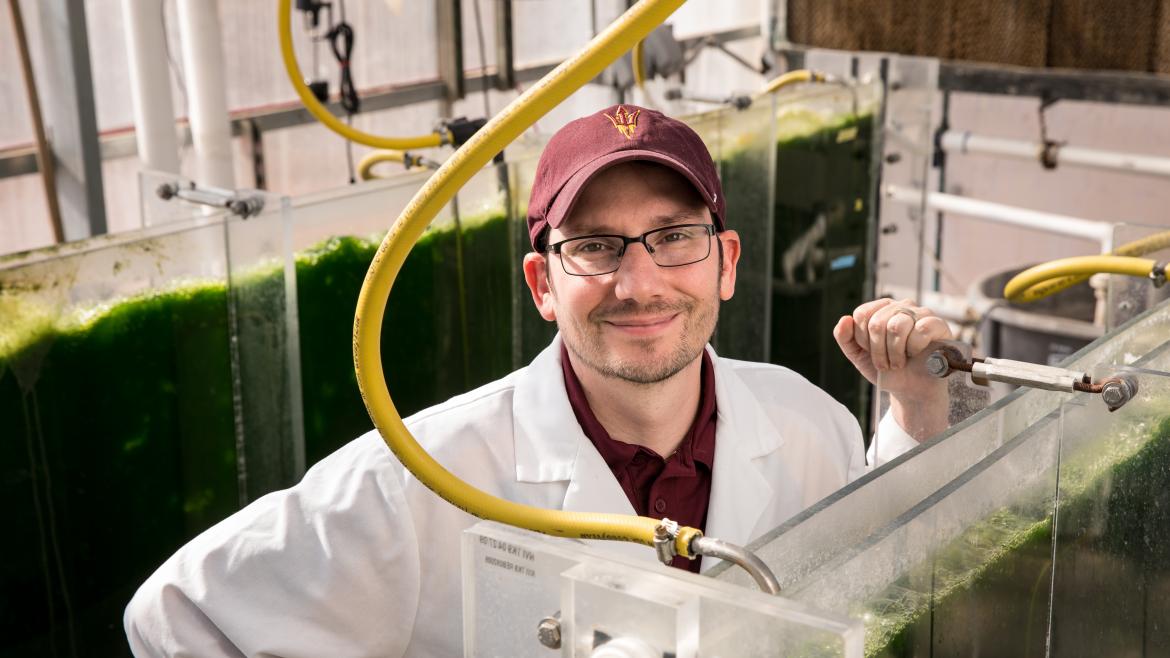 The world is awash in discarded plastics. A recent estimate of the amount of plastic in Earth’s environment puts it at 6.3 billion metric tons (of the 8.3 billion metric tons that have been mass produced since the 1950s). This includes what is in landfills and what floats around in our rivers, lakes and oceans. Some plastics can take up to 400 years to degrade.

What can be done to change this situation? ASU Assistant Professor Taylor Weiss says one way would be to make 100 percent biodegradable bioplastics that would dissolve in the environment in a matter of months.

His idea is to use bacteria to make plastics, specifically employing cyanobacteria, a photosynthesis-happy bug, as one of the starting materials. Weiss recently published a paper in Metabolic Engineering that outlines a new production method that would be powered by cyanobacteria and the naturally occurring Halomonas boliviensis.

Weiss recently joined ASU’s Polytechnic campus, where he will work on scaling up the process at the Arizona Center for Algae Technology and Innovation (AzCATI). Here, Weiss describes his idea for making environmentally friendly bioplastics.

Question: What are the issues with today’s plastics?

Answer: Plastics fall into two very distinct categories: Those that can be melted down and reused, and those that cannot. Recycling some plastics can save energy, but all plastics don’t ultimately degrade like biological materials down to “nothingness” or become metabolized by a living creature. Most plastics degrade like rocks: They just break down into smaller and smaller pieces that accumulate in the environment.

Q: The plastics you produce are 100 percent biodegradable. Over what time frame?

A: Degradation times depend on the object and conditions, but bioplastics typically break down faster than plant celluloses, like wood. With lots of biological activity, like in a compost pile, fibers and films will biodegrade within two months. The human body takes about three months to completely dissolve bioplastic suture threads. Something like plastic utensils in the ocean would take longer, but still be unrecognizable within a year.

Essentially, because the average usage-lifetime of a disposable plastic bag in the U.S. is 12 minutes, yet take hundreds of years to degrade, we're looking to bioplastics to create the benefits of disposability without the long-term negative consequences.

Q: How do you make these bioplastics?

A: We created a symbiotic partnership between two bacteria, each specializing in a specific task. The cyanobacteria use photosynthesis to create sugar and are engineered to constantly excrete that sugar. A second bacteria (Halomonas boliviensis) then consumes the sugar to alternately grow and produce bioplastics in cycles. Additionally, the cyanobacteria are captured in hydrogel beads (made from seaweed extract) that are submerged in saltwater filled with the bioplastic-producing bacteria.

Q: What is the advantage of this process?

A: In the big picture, we don’t use resources better spent on food production (fresh water and farmable land) to first grow a crop that can be processed into sugar and then fed to the bacteria to make bioplastics. We’ve done this by efficiently bringing together two bacteria species that are among the best on Earth at making sugar and bioplastics.

Trapping the cyanobacteria in a hydrogel is also critical — it means that the same cyanobacteria can be reused instead of regrown, and because the trapped cells barely grow at all, energy otherwise spent on growth can be redirected toward even greater sugar production. As a bonus, the system seems to stand up to contamination. We didn’t tightly control the system to keep out contaminating bacteria, or add chemicals to kill them. What contamination was present simply didn’t interfere — for more than five months — because our bioplastic-producing bacteria was simply so good at consuming all of the sugar.

Q: What needs to be done to make the process industrially viable?

A: The cyanobacteria, the Halomonas boliviensis bacteria and hydrogel have already been industrialized, so each has a lot of proven potential. Using as little of the hydrogel as possible and for as long as possible needs to be further explored. That will help keep costs down. Bringing all these elements together and in real-world conditions at large scales needs to be done. Fortunately, we have a one-of-a-kind academic test bed facility here at AzCATI that is uniquely suited to answer the remaining production questions and push development of the technology.

A library for the future

Iconic buildings dot Arizona State University’s Tempe campus.The Victorian charm of Old Main. The soaring inspiration of Interdisciplinary Science & Technology Building IV. Frank Lloyd Wright’s charming pink wedding cake of an opera house, ASU Gammage.But there is one structure on the map that, for some, might not make that list: Hayden Library.Hayden soon will undergo a $100 million renov... 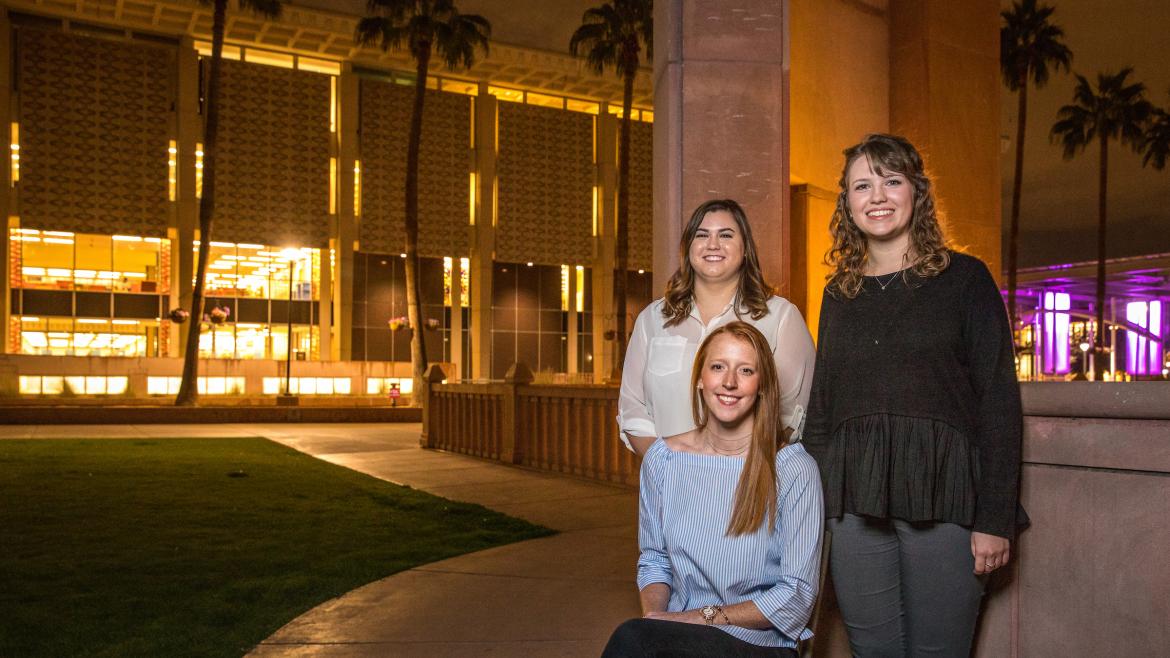 A library for the future

Team of Herberger Institute students tackled a full revamp of Hayden Library in design project, focusing on form and function

But there is one structure on the map that, for some, might not make that list: Hayden Library.

Hayden soon will undergo a $100 million renovation, inspiring a team of design students to undertake a redesign of the university’s largest library as their senior project last spring. Their academic challenge — though they are not involved with the actual renovation of Hayden Library — was to reinvent the entrance and concourse level and offer suggestions for the redesign.

Here's what they had to say about the library’s various spaces, what they would do to update them, and what they think about the plan to convert the stacks to an on-demand collection.

New entrance to Hayden Library as designed by Herberger students.

The courtyard and lantern

They would change the sunken entryway into an enclosed space.

“You don’t know that this is the entrance to the library, but with our design we’re trying to give peek-a-boo moments where users can see into the space and get an idea before going into the scary dungeon pit that it is now,” said Nicole Hayes, who graduated in 2017 with a bachelor of science in design from Herberger Institute for Design and the Arts.

“Right now, if you were sitting down here in the middle of summer — you wouldn’t be sitting here, because it’s an oven – there’s stone and concrete everywhere,” said Hayes, who now works with a hospitality design firm. “We want to highlight that the library is here with a glass jewel box on top of the courtyard with a new entry experience saying, 'This is where you go to get in the library.'”

The courtyard would become an interior space. The rest of it?

“The library is not protected by any preservation laws, so we could do whatever we want to the exterior,” Hayes said.

Get rid of the stone railings?

“Everything,” said Megan Dibella, another 2017 ASU alumna who particpated in the project. She earned a bachelor of science in design from Herberger Institute and is currently an education and workplace designer.

Including the lantern? Yes, they say. In its place, they envisioned a glass box that doubles as a walkable gallery space where you can look down into the library.

The entrance and concourse

The students also envisioned big changes once you're inside the building, due to both functionality and aesthetics.

“It’s just really unwelcoming in general,” Dibella said. “No one knows that this is the only entrance into Hayden Library. Everything is hard and static. … We all walked in and had no idea we were in the tower. We didn’t know that when you walked down and over that you were in a different building.”

Team member Jenna Woods, who now works with a residential design firm after graduating with a bachelor of science in design from Herberger Institute last year, also found the clarity of the space lacking.

“I was like, ‘How do we get an elevator up to the fourth floor?’” she said.

The team visited to make observations at different times of day to see how students used the library.

“There are so many people who are coming here just to get things done, but there aren’t designated places for that,” Woods said. “They just find space wherever they can, especially during finals week. If there’s an open spot, you go to that spot. … There’s nowhere geared toward specific things.”

“During finals week there’s never a spot to sit,” she said. Dibella added that the design team's goal was “actually opening up the library and getting rid of all the stacks and having more maker spaces and really creating this place that is a central hub.”

The library already has spaces like that, but they're under the radar for many, Woods said: “If more people knew about them, more people would use them.”

“A big concept of our design is taking what the library is already giving us and drawing attention to it,” Dibella said.

“Any time in our plans you see an area in blue, it’s a quiet space because blue is normally associated with calming, more relaxing emotions,” Hayes said. “More high-intensity places like our tech shops or collaborative areas, those are denoted in orange because that’s a more uplifting color that promotes community.”

Promoting community even extends to the basement, which the group thinks needs a makeover.

“There’s tons of storage and filing cabinets everywhere. … Other than that it’s a waste of space right now,” Hayes said.

Their design would open the basement up and make it more welcoming.

This is a hot-button issue.

When the team met with library staff to discuss the project, the librarians mentioned that most people come to the library to get work done.

“As we move into the future of the library, it’s not to come here and get a book anymore,” Hayes said. “That’s not why you go to the library. In my four years at ASU, I didn’t check out a single book, but people come here to study, and so our job was to design spaces that could actually be used for what people are using the library for right now.”

They researched what other libraries are doing with their print collections. Many are turning to ASU’s future model: books stored off-site and delivered on demand.

What the university is doing — maintaining on-site stacks of carefully curated books — is what the team recommended. University Librarian Jim O'Donnell has said the institution is being strategic about the physical books.

"The ones that are housed in open facilities will be carefully chosen to inspire, challenge and support our best work,” O'Donnell said.

As part of the ASU Library's mission to maximize user engagement around print collections, the university recently won a $380,000 grant from the Andrew W. Mellon Foundation for a three-year implementation project to reinvent the library’s strategy and practice for open-stack print collections. Learn more here.

“They’re keeping some of their special collections here, which is pretty cool,” Dibella said. “There’s a lot of stuff we don’t know that they have, first editions of stuff; that’s the stuff that could be showcased.”

“That’s what a library is for,” she said. “We wanted to make sure there’s still a balance, that you’re going to the library for something and it’s not just a giant study box. Being able to order the books and have them here and still keeping the old classics is a part of it because it’s still a library and a lot of people requested that.”

Their work was done as their senior studio project in interior design at ASU under the guidance of assistant professor Milagros Zingoni and instructor Brie Smith.

Top photo: Recent Herberger Institute for Design and the Arts alumnae Jenna Woods (seated), Megan Dibella (left) and Nicole Hayes (pictured on Dec. 5) spent their final semester last spring re-imagining Hayden Library and designing it into a library of the 21st century. Dibella is now working as an education and workplace designer, Hayes is working is working for a hospitality design firm and Woods is at a residential design firm. Photo by Charlie Leight/ASU Now