Two Arizona women with a passion for philanthropy have been selected as the 2018 Community Servant-Leadership awardees as a part of Arizona State University's 33rd annual Martin Luther King Jr. Celebration, for their influential work in the community.

Cindy McCain and Evvan Morton will be honored at the Dr. Martin Luther King Jr. Breakfast Celebration on Jan. 18 at the Memorial Union on ASU's Tempe campus. 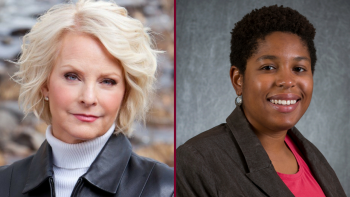 Cindy McCain and Evvan Morton will be honored at the Dr. Martin Luther King Jr. Breakfast Celebration on Jan. 18 at the Memorial Union on ASU's Tempe campus. Download Full Image

The awardees were selected by the ASU MLK Jr. Committee for their servant leadership: a philosophy of serving first, then leading as a way of expanding service.

McCain was stopped at a gas station when she noticed two teenage girls standing outside the convenience store. As she pumped her gas, McCain saw from afar that the girls looked frightened and lost. There was a man standing behind them, almost out of sight. That’s when she realized human trafficking was taking place right before her eyes — in Yuma, Arizona.

Experiences like this drive McCain in her fight against human trafficking. As this year’s MLK Jr. Servant-Leadership Awardee, she will be honored for her significant and interdisciplinary efforts to fight the heinous crime.

“I watched the police come and get that guy and save those two girls,” she recalled. “Every ounce of work I’ve done was worth it that day.”

McCain said her efforts truly began when Arizona was awarded the Super Bowl for 2015, and she used the event’s broad public reach to shed light on the state’s growing human trafficking problem. The result was a greater awareness and more activism throughout the state and country, she said.

“The human rights violation that human trafficking is and does to human beings is not only a violation, but it’s simply inhumane,” McCain said. “It just is something that to me, I found it unbelievable when I realized it was going on in my own country. A country that I thought, and still do think, is the best in the world — that somehow this could be taking place.”

Like Martin Luther King Jr., McCain expands upon her strong leadership with service.

“It’s difficult to me to completely understand the issue unless you get your feet dirty. You don’t have to travel overseas or spend money, but it’s about seeing firsthand, out on the streets, exactly what’s going on,” she explained.

In Greece and Turkey, McCain taught refugees to identify signs of human trafficking and avoid falling prey to traffickers. She traveled the world to familiarize herself with the many facets of life affected by trafficking including law enforcement, health care, child welfare systems and the internet.

In the future, McCain hopes to initiate interstate communication between law enforcement officers and educate communities about human trafficking.

She accepts this honor on behalf of the victims of human trafficking, she said.

“Serving and leading are two common core values you try to teach your children. Service to your country and your community,” McCain said. “You as the one serving always gain more than the people you’re trying to help.”

Morton is an Arizona State University graduate student with a passion for environmental change and peer empowerment. She is the 2018 winner of the Martin Luther King Jr. Student Servant-Leadership Award and is working toward getting her master's degree and doctorate in sustainable engineering at ASU.

“I began learning more about climate change and global warming specifically,” Morton said. “I just felt like there was more that needed to be done in that area because I just kept hearing about the problems, but I wasn’t hearing much about solutions in the field.”

Morton graduated from the University of Cincinnati for her undergraduate degree. She began noticing the impact government actions were having on the environment without knowledge of that impact.

“During my undergrad, I started getting more interested in renewable energy and climate change and things like that,” Morton said. “When I decided to go to graduate school, I just started doing Google searches for those different topics and I started learning more about sustainability as well. Every time I would search things like that, ASU kept popping up, so I knew that was a school I should apply to.”

Morton also finds value in leadership and empowering fellow students. She is the president of the Black Graduate Student Association at ASU. She has worked hard to bring new life into the organization.

“Evann has assumed the call for Black Graduate Student Association,” said Debra Crusoe, program coordinator for the dean of students.

“She’s just been ideal for the organization,” Crusoe said. “She’s there on the frontline of women in engineering. She’s just been really good support for underrepresented students in science.”

“By being a minority group on campus, it can be overwhelming and it can be difficult feeling like you’re the only one that looks like you,” Morton said. “We want to create a space where you can find other people that look like you and know that you’re not alone and you can build community with them.”

She believes leadership is thinking of the whole of the group instead of oneself as an individual. She feels a deep sense of responsibility to the Black Graduate Student Association.

Morton believes having a strong sense of community can also foster better leadership and role models.

“I also know that there aren’t many women, let alone black women, in engineering fields or science fields,” Morton said. “It’s important to me to talk to other girls that may be interested in those fields, or even if they’re not, just to know that there are other black women in the field so that they can realize it’s a possibility for them as well.”

“I’m very interested in working in government because I’ve learned … that many of the decisions, specifically in scientific issues … pertaining to renewable energy and to climate change and energy development, are made by leaders that do not necessarily have knowledge in these fields.”

Morton continues to chase her goals. She is interested in working for the Department of Energy or the Department of State. She wants to continue to foster her fascination with renewable energy development to help countries to reduce their negative impact on the environment.

Catherine Hathaway contributed to this story.

Ryan Luy, Lauren Schaecher, Sydni Alaniz and Rachel Estes are excited to start their new careers in May with a hefty amount of real-world experience in their portfolios. The Arizona State University seniors developed a design plan for the 2018 Martin Luther King, Jr. committee through their Visual Communications III class and won the opportunity to have their branding designs used for the celebr...

Ryan Luy, Lauren Schaecher, Sydni Alaniz and Rachel Estes are excited to start their new careers in May with a hefty amount of real-world experience in their portfolios. The Arizona State University seniors developed a design plan for the 2018 Martin Luther King, Jr. committee through their Visual Communications III class and won the opportunity to have their branding designs used for the celebration of events.

The four visual communications seniors developed a design and competed against 10 other groups for the opportunity to have their work used in the campaign. Among those deciding the winning group was Colleen Jennings-Roggensack, executive director of ASU Gammage and ASU Martin Luther King Jr. committee chair. 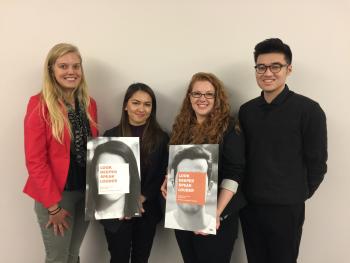 “The ASU Martin Luther King Jr. events provide a great opportunity for real-world design experience for our ASU students,” Jennings-Roggensack said. “This group of students truly captured the essence of our celebration with their creative execution and unique branding. We are so proud of their achievements and to award them this enriching opportunity.”

The project was a component of their Visual Communications III class in the Herberger Institute for Design and the Arts in spring 2017. All the other groups in the class were working on their own design for the events, and at the end of the semester, each group pitched the designs to the 2018 ASU MLK Jr. Committee.

“We create what we think is necessary for this campaign,” Schaecher said. “We were able to show them the merits of a more digital route. All of us worked really hard on the digital aspect.”

The group focused more on making their products digital. They knew the committee would want to see traditional marketing forms, but they wanted to show them the analytics and what would be the most effective way of promoting the events.

“You could also tell how the ASU campuses have been changing,” Luy said. “You need to be strong and confident with your concept and ideas.”

The Herberger Institute for Design and the Arts has been involved with the Martin Luther King Jr. events branding for nearly 10 years. The team knew exactly what the committee expected, but they also wanted to innovate new tactics and ideas.

“They traditionally have a lot of posters,” Alaniz said. “They’ve been doing this for so long. They know what they like. We had to convince them our way is the best way to solve this.”

The students admit that there were minimal issues between group members. They all brought different ideas to the table when they came together, but they final product was a cohesive vision.

“We all knew each other,” Alaniz said. “There were some rocky moments, but we shared the same vision.”

They were given guidelines on what the committee wanted to see during the presentation. After all the groups presented, the 11 were narrowed down to approximately five finalists. The students admit it was challenging giving their presentation more than once.

““Everyone steps up their game so much,” Schaecher recalled. “We would hold some stuff back.”

Their presentation had to include materials such as an email blast, t-shirts, posters, website design, budgeting, accurate numbers, custom folders and packets of samples.