Taking the human response into account in climate change

New model factors in reactions to extreme weather, finds that our behavior could be a crucial factor in future global temperatures

Humans may be the dominant cause of global temperature rise, but they also could be a crucial factor in helping to reduce it, according to a new study that for the first time builds a novel model to measure the effects of human reactive behavior on climate.

Drawing from both social psychology and climate science, the new model investigates how human behavioral changes might evolve in response to extreme climate events and affect global temperature change. Combining climate projections and social processes, the new model predicts global temperature change ranging from 3.4 to 6.2°C by 2100, compared to 4.9°C from the climate model alone.

The results, published today in “Linking models of human behavior and climate alters projected climate change” in the journal Nature Climate Change, demonstrate the importance of factoring human behavior into models of climate change. The research team that conducted the study includes a professor from Arizona State University.

“A better understanding of the human perception of risk from climate change and the behavioral responses are key to curbing future climate change,” said lead author Brian Beckage, a professor of plant biology and computer science at the University of Vermont, Burlington.

“Most models of projected climate change do not take into account human behaviors, and when you do, climate futures can look very different,” added Ann Kinzig, an ASU professor in the School of Life Sciences. “Current models assume human behavior remains constant over a century or more. But people will respond to climate change, and that will alter the possible future that we will experience.”

Kinzig, who is also a senior sustainability scientist and chief research strategist in ASU’s Julie Ann Wrigley Global Institute of Sustainability, specializes in how humans shape and influence their natural environments and what this means for human health and Earth’s ecosystems.

The new model accounts for the dynamic feedbacks that occur naturally in the Earth’s climate system — temperature projections determine the likelihood of extreme weather events, which in turn influence human behavior. Human behavioral changes, such as installing solar panels or investing in public transportation, alter greenhouse-gas emissions, which change the global temperature and thus the frequency of extreme events, leading to new behaviors, and the cycle continues.

The model found that long-term, less easily reversed behavioral changes, such as insulating homes or purchasing hybrid cars, had by far the most impact in mitigating greenhouse-gas emissions and thus reducing climate change, vs. more short-term adjustments, such as adjusting thermostats or driving fewer miles.

“It is easy to lose confidence in the capacity for societies to make sufficient changes to reduce future temperatures,” said Louis Gross, director of the National Institute for Mathematical and Biological Synthesis (NIMBios) at the University of Tennessee, Knoxville, and a co-author of the paper. “When we started this project, we simply wanted to address the question as to whether there was any rational basis for ‘hope’ — that is, a rational basis to expect that human behavioral changes can sufficiently impact climate to significantly reduce future global temperatures.

“Climate models can easily make assumptions about reductions in future greenhouse-gas emissions and project the implications, but they do this with no rational basis for human responses,” he added. “The key result from this paper is that there is indeed some rational basis for hope.”

As the calendar year drew to a close, two researchers with Arizona State University's School of Geographical Sciences and Urban Planning received great news about their research.Allianz Climate Risk Research AwardElizabeth Tellman, a doctoral candidate with the school, was recently recognized as a finalist for the Allianz Climate Risk Research Award. In total, researchers from 18 countries submit...

As the calendar year drew to a close, two researchers with Arizona State University's School of Geographical Sciences and Urban Planning received great news about their research. 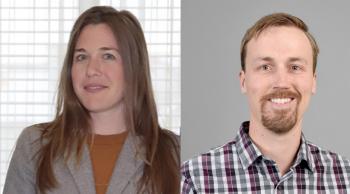 School of Geographical Sciences and Urban Planning's Elizabeth Tellman, a PhD candiate, and Calvin Thigpen, a postdoctoral scholar, both received major honors at the conclusion of 2017. Download Full Image

Elizabeth Tellman, a doctoral candidate with the school, was recently recognized as a finalist for the Allianz Climate Risk Research Award. In total, researchers from 18 countries submitted their ideas to tackle the challenge of climate change. Tellman’s work on flooding in El Salvador won her second place in the competition.

Tellman was inspired after living in El Salvador for several years and seeing the effects of landslides and flooding on poor rural regions. Her goal is to create a global flood detection system with data from multiple satellites using cloud computing and remote sensing techniques. This will allow developing countries in particular to apply better flood mitigation strategies.

“In El Salvador, I worked in disaster relief and saw firsthand how communities who were impacted by floods did not receive the aid they needed because their local mayor did not include their name on aid lists, because these communities were from another political party,” Tellman said. “I felt frustrated by this situation and returned to graduate school to understand how flood science could enable better information so that politicians could not manipulate the aid process and so that vulnerable communities who needed aid in extreme events would receive it.”

As part of this effort, Tellman co-founded Cloud to Street, a tech start-up and social enterprise that produces flood information and gets that information to decision-makers and communities who can leverage it.

“I believe it takes more than one scientist to make a difference. It takes an organization of people dedicated to both producing better flood data and ensuring that data produced matches a decision context where risk can be reduced or mitigated,” Tellman said.

Insurance company Allianz Reinsurance initiated the award to help improve society’s capacity to respond to the rising impact of climate change and to deal with associated uncertainties.

“For years, we insurers have assessed future risks based on what happened in the past,” said Amer Ahmed, chief executive officer of Allianz Reinsurance. “Now, climate change is challenging this model. The past is no longer a good guide for the future.”

Tellman hopes the insurance industry and scientific community can partner for real change.

“The insurance industry can play a crucial role in climate change adaptation. Most of the flood exposure increases over the next two decades are expected to happen in developing countries, which is also where most people are uninsured or underinsured,” Tellman said. “I hope my research inspires Allianz to consider how new technologies can enable markets they can help shape.”

Calvin Thigpen, a postdoctoral researcher with the School of Geographical Sciences and Urban Planning, was also recently recognized for his work at the intersections of government and public interest.

Thigpen’s paper “Transportation Policy at the Ballot Box” focused on how voters can directly determine transportation policy by proposing and voting on ballot box measures. Through analysis of 20 years of local transportation policy-related measures in California, several patterns emerged, including how the public tended to support measures that favored alternative modes to the car, but also generally voted against modern planning tools and strategies, like red light cameras and roundabouts. In some instances, the ballot box process created uncertainty, as voters changed their minds on the same topic over many years.

“One of the fundamental challenges in planning is the role of the planner, relative to citizens,” Thigpen said. “Ballot box planning, as it is called in our field, is a way for citizens to directly get involved in urban and transportation planning and policy.”

Ballot box planning, while giving the power to the voter, also means professional planners can be left on the sidelines. This can create several issues where voters may interpret that some of the changes recommended by planners are too punitive in nature, and therefore are not approved by voters. According to Thigpen, it may be that these transportation planning tools, as well as their benefits or purposes, are not thoroughly explained, leading to voters voting against for these efforts — despite their added benefits.

“I hope my research will show policymakers the potential pitfalls of being removed from the policy process,” Thigpen said. “Though voters have tended to vote in favor of society's best interests in some instances, there are several examples of where it seems clear that a top-down approach is better for the greatest societal good. Policymakers may therefore want to resolve conflicts before they end up in on the ballot box.”