Mixing politics and eggnog with family during the holidays

You love your brother, but you don’t always agree with his politics. In fact, you still can’t believe how he voted in the 2016 presidential election. And now you’ll be spending the upcoming holidays with him. Should you discuss the election, or avoid politics altogether? 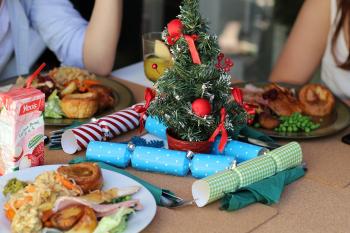 “If I know we disagree, and we never have a conversation, we will continue to be polarized, and that polarization is going to become more and more extreme,” he said.

Olson teaches Civil Dialogue, an approach for discussing provocative topics, initially developed in 2004 by John Genette, then a graduate student who found he wasn’t able to talk his own family about the Iraq War. According to Olson, “we need civility and dialogue as much now as we did when we first started this work 13 years ago.”

“We sometimes think the polite thing to do is avoid difficult subjects,” Olson said. “In reality, that is not civility. If I won’t talk to you about certain subjects, there is something not civil between us.  We are putting our relationship on hold, and saying ‘this part of our relationship doesn’t exist.’”

People often misunderstand the term, and think civility is about manners and politeness, according to Jennifer Linde, a Hugh Downs School senior lecturer who began teaching Civil Dialogue in 2004.

“One could be very mannered and polite and still be uncivil,” Linde said. “It’s more about respect. If you respect another person, and you respect their right to have an opinion other than yours, then politeness and manners probably follow. You can be passionate about your beliefs, but you cannot criticize someone for thinking differently.”

Using President Donald Trump as an example, Linde said he might honestly believe Hillary Clinton and the Democrats acted in a way that was dishonest. But calling her “Crooked Hillary” demonizes her, and takes the conversation into an unproductive space.

In a Civil Dialogue session, five volunteer participants consider a provocative statement, on topics such as same-sex marriage, abortion, gun control and immigration. They have the opportunity to embody a position on the statement ranging from "agree strongly" to "disagree strongly." Participants are asked to follow guidelines for civility that are explained by a certified facilitator. The dialogue is then extended to the broader audience who are encouraged to respond with their own opinions and questions.

Participants in a Civil Dialogue often will figure out their position on a particular topic by listening to others speak.

“One woman at Northern Arizona University went through the whole dialogue process and came to the realization that she didn’t have an original thought of her own,” Olson said. “She told us she heard her mother’s words coming out of her mouth. It was an awareness on her part that she needed to change.”

There are just two goals in Civil Dialogue. The first is understanding each other.

“Many times we don’t understand why people who have similar backgrounds can have totally different viewpoints,” Olson said. “I might say, ‘I know Jennifer is really smart, and we both grew up in Wisconsin, so how can we believe something so totally different?’ It’s often through storytelling that participants begin to understand why someone they thought they knew held such different beliefs.”

The second goal is to model civility for 45 minutes, which can be difficult, Olson said, because it involves intentional listening behavior.

“Most people have never been trained in listening. Most people also hate silence,” he said.

Olson and Linde have also created The Institute for Civil Dialogue along with Genette, currently a research fellow at the Hugh Downs School. All three regularly hold Civil Dialogue events at The Empty Space performance venue at the ASU Tempe campus that are open to the public. They have also partnered with ASU’s Morrison Institute for Public Policy at the Downtown Phoenix campus, to hold dialogues in conjunction with two state voter initiatives. Outside of ASU, Olson and Linde have taught Civil Dialogue to diverse groups, including Arizonans for Gun Safety, the New Jersey Communication Association and the Masons in California.

To help others hold a dialogue, Genette, Linde and Olson wrote a handbook, "Hot Topics, Cool Heads," now in its second printing. The Hugh Downs School also offers a certificate in civil communication.

Can civil dialogue return to a country — and your holiday dinner table — currently so polarized in its politics and beliefs?

“If I didn’t believe that we could return to some level of civility I wouldn’t be doing it,” Olson said. “We’d like to believe that when we engage people in Civil Dialogue, like a stone on the water, there will be a ripple effect, and more and more people will practice civility.  Eventually our communication standards will be higher.”

Come watch Arizona State University's women’s gymnastics team as they take on No. 21 Auburn, No. 17 Iowa, and Iowa State when they host their first meet of the 2018 competition season at 4 p.m. Jan. 6, at Wells Fargo Arena. Senior Nichelle Christopherson will look to build on her 2017 MVP season as she leads the Gym Devils into an underdog matchup against two ranked opponents.  Admission is ...

Come watch Arizona State University's women’s gymnastics team as they take on No. 21 Auburn, No. 17 Iowa, and Iowa State when they host their first meet of the 2018 competition season at 4 p.m. Jan. 6, at Wells Fargo Arena.

Senior Nichelle Christopherson will look to build on her 2017 MVP season as she leads the Gym Devils into an underdog matchup against two ranked opponents.

Admission is free with a valid Sun Devil Card. Other fans may purchase single meet tickets starting at $8.

The Gym Devils are partnering with ASU’s Department of Sustainability. Support the Sun Devils' "Go Green" movement as they look to raise awareness on how fans can help ASU remain a nationwide leader in sustainability. The team is also welcoming the Boy and Girl Scouts of America to this meet.