ASU engineering grad plans to use solar energy to better the Philippines, her home country

While Brigitte Lim was working on her applied project to promote employment in her home country of the Philippines through solar energy, she stumbled upon an opportunity to amplify her project’s reach. 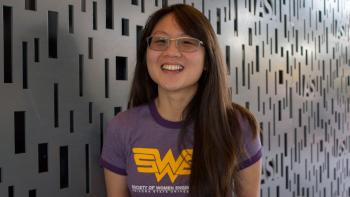 Lim heard about the Geneva Challenge: Advancing Development Goals contest while she was taking an international development elective course in spring 2017. Seeing that the competition’s theme was solving challenges of employment, it was an easy choice to apply with the work she had already started.

“I thought I’d enter this competition to get the word out about my idea,” said Lim, a recent graduate of the Solar Energy Engineering and Commercialization professional science master’s degree program (PSM SEEC) at Arizona State University’s Ira A. Fulton Schools of Engineering.

Little did she know where the opportunity would take her. With the help of a team of international and interdisciplinary graduate students, a passion for solar energy and a desire to make a difference in her community, she would end up catching the attention of a United Nations program.

Journey to a solar future

After completing her bachelor’s degree in management of applied chemistry at the Ateneo de Manila University, Philippines, Lim went to work as a Teach for Philippines fellow, working for two years to help transform education in the country. It was a good way to pursue her passion for teaching, and she made some good connections with others interested in social action in her country.

When it came time to start her master’s degree, Lim was interested in environmental science and solar energy in particular. Not finding any programs close to home that supported her goals, she found her way to ASU through a scholarship called STRIDE offered through the United States Agency for International Development for Filipino students looking for professional science master’s degree programs.

“ASU had the most relevant program for me because it wasn’t just the physics of solar cells,” Lim said. “It was more business and applied photovoltaics, how the technology works, how to market it and commercialize it.”

“These opportunities made available through the PSM SEEC program let us see solar outside of the classroom, and I feel like that is very beneficial because you’re learning by actual interaction with industry,” Lim said.

This experience helped her see how the solar industry could be beneficial to communities in the Philippines, and she got to work on her applied project.

Putting her ideas out there

The Geneva Challenge is actually a group competition for graduate students. So, Lim reached out to some former colleagues from her days working with Teach for Philippines: Anna Gabrielle Alejo, a graduate student studying developmental psychology at the Columbia University Teacher’s College; Jerome Bactol, a candidate for a master’s degree in community development at the University of the Philippines and project development officer of the Philippines’ Department of Social Welfare and Development; and Jose Eos Trinidad, a recent graduate who studied social sciences at the University of Chicago and is now working as a researcher of the Ateneo de Manila University’s Institute for the Science and Art of Learning and Teaching.

Combined with her knowledge of opportunities throughout the value chain of the solar industry, these colleagues helped to expand upon additional social theories and local government program opportunities related to employment and underserved communities.

Together over Skype from Tempe, New York City, Chicago and Manila, they worked hard over the summer to build upon Lim’s base project for the competition’s requirements.

They created Solar N3E: Solar Network for Energy, Education and Employment — a social enterprise that integrates research, training and networking to expand employment opportunities in the Philippines through the solar industry.

The project’s goal is to minimize in-work poverty, urban unemployment and the number of youths who are not in education, employment or training. With the help of government programs in education, Solar N3E will help marginalized community members get the training they need to  find employment in the nation’s growing solar energy industry.

A roller coaster of a final semester

In August, they received an “email of disappointment” saying they didn’t make it to the semifinal round, Lim said. Happy they had tried, Lim got back to work on her PSM SEEC applied project and job searching as her graduation date neared. 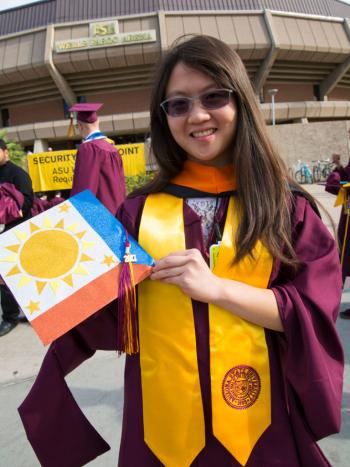 Then in November, Lim and her teammates learned they had won the United Nations’ Sustainable Development Solutions Network (SDSN) Youth Prize.

The Solar N3E project joined two other international teams’ projects to solve employment challenges in Africa that were recognized as part of the new prize.

These projects will be showcased on the Youth Solutions Report platform, which puts youth-led solutions projects in front of a network of institutional partners, experts, private companies and media outlets to gain potential supporters, investors and donors.

A future of possibilities

After graduating, Lim will return home and get to work on filling out the details of Solar N3E for the Youth Solutions Report platform, and begin working as a business developer at Japan Solar in Manila, Philippines.

After her Geneva Challenge run stopped short, she was fully invested in beginning her work in industry, but she can now also further her work to implement Solar N3E.

“I think working with Japan Solar is not bad for trying to implement my idea because having this job helps me interact with competitors and the customers the solar industry serves,” Lim said. “I can immerse myself in the local industry, which makes the plan more feasible.”

Editor’s note: This is part of a series of profiles for fall 2017 commencement. See more graduates here.Arizona State University graduate Javier Baez was interested in chess at an early age and enjoyed solving puzzles. He liked math but did not think about studying mathematics.He grew up in the border town of San Luis Rio Colorado, Sonora, Mexico until he started middle school in San Luis, Ar...

Arizona State University graduate Javier Baez was interested in chess at an early age and enjoyed solving puzzles. He liked math but did not think about studying mathematics. 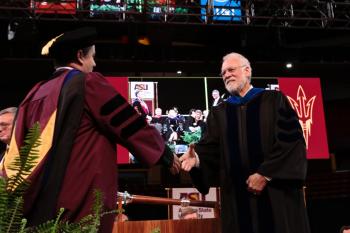 He grew up in the border town of San Luis Rio Colorado, Sonora, Mexico until he started middle school in San Luis, Arizona. He became a U.S. citizen in 2012.

His parents were both educated in Mexico, his father as an engineer and his mother as medical doctor.

Every summer during high school, he attended the Joaquin Bustoz Math-Science Honors Program at ASU. The last class he took was applied mathematics, where he learned that he could model the spread of diseases, population growth and genetics using mathematics.

“That was the ‘aha’ moment when I realized I wanted to study mathematical modeling,” Baez said.

He went on to earn a Bachelor of Science in applied mathematics for the life and social sciences at ASU.

In his last year of undergraduate studies, he took a graduate level course in mathematical biology, where he met professor Yang Kuang. 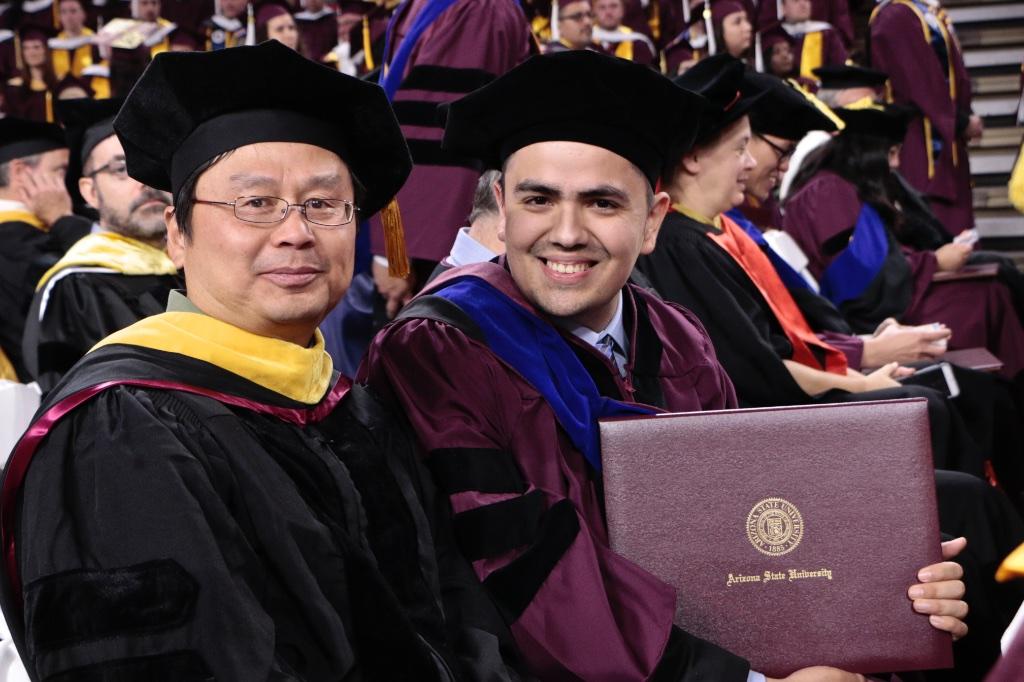 “Through the course, I got to know him and his philosophy for doing science,” said Baez. “He inspired me to do research in mathematical biology and I decided to stay at ASU to work with him for my PhD.”

On Monday, Dec. 11, Baez earned a doctorate in applied mathematics from the School of Mathematical and Statistical Sciences.

“Javier is very adaptive and hard working,” said Kuang. “Most importantly, he is a fast learner, and a creative and experienced programmer.”

Baez has already had two real data-based publications, one on Ebola epidemics and one on prostate cancer treatment predictions. He plans to submit several more in the coming months.

He is a key author, in collaboration with the Xiao Wang Lab, of a significant manuscript on pattern predictions in synthetic biology to be submitted in a month to the journal Science.

This past summer, Baez entered the Kaggle competition from Zillow to learn more about machine learning. He is using boosting and feature engineering strategies to predict the Zestimate error in a dataset of houses given by Zillow. Currently at 105th place on the leaderboard, he hopes to be in the top 100 to advance to the second round in January.

He also worked during the summer as an intern at Caterpillar, which led to a job offer. He will begin his career as a data scientist at Caterpillar in January.

Answer: During my PhD, I learned something that probably everyone experiences. As you learn more, you realize how little you know. Every field is incredibly vast, and to fully master anything you need to be a lifelong learner.

Q: What was your dissertation topic?

A: I looked at how to model androgen deprivation therapy for prostate cancer patients. Specifically, how to predict when a patient will become resistant to the therapy in order to avoid unnecessary treatments and improve their quality of life.

Q: Why did you choose this topic to research?

A: I was interested in modeling physiological systems. When I started the research phase of my PhD, I learned about a clinical trial done in Canada for patients undergoing androgen deprivation. I decided to work on extending previous works of my advisor with former students.

Q: What is the best piece of advice you would give to those still in graduate school?

A: That would depend how early or late you are in your graduate degree. If you are starting out, don’t burn out too quickly by working all the time. If you are close to finishing, push through and finish — you are close!

Q: Why is mathematics a great major to pursue?

A: Mathematics gives you a broad perspective and the ability to work on many different things. I was able to work on spreading of Ebola, prostate cancer modeling, pattern formation in cells, and plant virus spread.

Q: What do you think is misunderstood about math by the general public?

A: I think the general public thinks of mathematics as a set of rules and formulas that you need to memorize. Mathematics is about ideas and logic. Mathematics is used for understanding things better/precisely and not to make them more complicated.

A: My favorite spot was Wexler Hall. I had my office, classes, and meetings there.

Q: When not studying, what do you like to do for fun in your spare time?

A: I (have played) chess as a hobby for some years now. I try to play in tournaments when I have time.

A: I am very interested in medical problems, such as the problem I worked on for my thesis. However, I know preventive medicine has a greater impact than curative medicine. I know that about half a million children die from diarrhea worldwide, a fully preventable and curable disease. I think that I would implement a campaign to educate people about washing hands to prevent diarrhea and try to get them access to clean water. It would take more than $40 million to solve it worldwide, but I would try to help as many communities as possible.