Tierra McDonald grew up in a family immersed in public service. Whether for work or volunteering, the importance of being involved in the community was instilled in her at an early age. 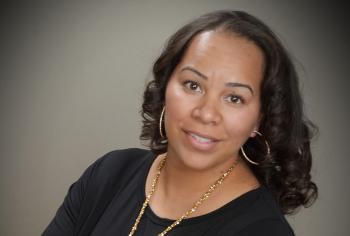 Tierra McDonald is the fall 2017 outstanding graduate of the School of Public Affairs. Download Full Image

So it wasn’t a surprise that she chose the same career path, pursuing a bachelor’s degree in public service and public policy with the School of Public Affairs, part of the College of Public Service and Community Solutions at Arizona State University. McDonald is her school's outstanding graduate for fall 2017.

“I had just moved to the state and was impressed with the awards and accolades that ASU has received,” McDonald said. “With a focus on innovation and service, it was a natural fit for me.”

McDonald said she has been on both sides – in poverty and making it out.

“It is easy to find yourself in that situation. We are all the same,” she said. “It is important to help others, appreciate what you have and be willing to share.”

At ASU, she says the most eye-opening thing she learned was the importance of sustainability. A green initiatives class gave her a greater understanding of why legislation is developed and what we can be doing better.

“You hear about climate change, global warming, but don’t realize how daily actions impact the planet,” she said. “We want to live comfortably and do the right thing for generations to come.

“It makes me cringe a little less to pay 10 cents for a plastic bag, or see how I am doing relative to neighbors on my utility bills.”

McDonald will continue at ASU, pursuing a master's degree in public administration. Her ultimate goal is to become a court administrator or city manager.

Her big aspirations? Make an impact on inequality and justice. She says that if she were given $40 million today to solve one problem, she would address the slave trade in Libya.

“Slavery was abolished a long time ago. No one should be sold,” she said.

What will it take to convince climate skeptics?

This week the “One Planet” summit meeting in Paris focused on meeting climate goals without the help of the U.S. government.The summit comes two years after the landmark climate-change conference in Paris when 196 countries vowed to keep this century’s global temperature increase below 3.6 degrees Fahrenheit, a deal known as the Paris Agreement.The United States is now the only nation on Ear...

What will it take to convince climate skeptics?

Early sentinel of global warming Tickell discusses how thinking changed in Europe, what needs to happen to alter US opinion

This week the “One Planet” summit meeting in Paris focused on meeting climate goals without the help of the U.S. government.

The summit comes two years after the landmark climate-change conference in Paris when 196 countries vowed to keep this century’s global temperature increase below 3.6 degrees Fahrenheit, a deal known as the Paris Agreement.

The United States is now the only nation on Earth to have rejected the global pact.

In Britain, Tickell is influential on environmental issues. He argued in a 1977 book — “Climatic Change and World Affairs” — that mandatory international pollution control would eventually be necessary. He was credited by then-Prime Minister Margaret Thatcher for persuading her to make a speech on global climate change to the Royal Society in September 1988.

Question: What do you think could have been done differently in this country?

Answer: I think if U.S. presidents had been ready to recognize what is happening, and to say so, it would have been very helpful. Obama was quite good on it. He acknowledged it. The science is fairly unequivocal. It’s very clear that’s what’s going on. What is not so clear is what happens in different parts of the world. The Chinese are suffering from a good deal of unexpected change. Indians likewise. The British too and the Americans likewise. But I think it’s a question of how you present it. There are people in the United States who resent the whole thing and reject it all. There are very few people like that in Britain at the moment.

Q: What is your advice on how to turn this situation around?

A: I think you need to have some political strength. Obama is probably going to go on saying what he’s saying, but if other politicians could articulate what they think is going on, it would be helpful. We need a bit of political leadership. We had it originally in Britain from Margaret Thatcher, with whom I used to work quite closely. The current government sits it all out quite clearly. At the moment it’s not contentious. It’s just accepted as part of the natural changes taking place. Of course people are thinking about what we ought to do about it. That’s different; whether we should introduce new taxes on motor vehicles, how we could cope with excessive carbon, that kind of thing is just very tricky.

Q: Do you think the world can be saved from this?

A: Oh yes, I think so. If we are not able to stick to the targets of reducing carbon content in the atmosphere according to those set by the Paris meeting, I think we should all suffer. ... It’d just be very uncomfortable and very inconvenient. The hotter it warms and the more eccentric the behavior, the more people want to do something about it, but that hasn’t happened so much yet. It’s happened a bit — but not yet on any real scale. You need a bit of help from the environment before you can persuade everyone they’ve got to do something about it, especially if it’s something inconvenient, like cutting this or cutting that.

Q: An article this week reported that the Government Accountability Office, which is kind of like a watchdog for Congress, came out and said that the cost of cleaning up after disasters has been more than $350 billion over the past 10 years. We’re a capitalist country — nothing speaks so strongly as the almighty dollar. Do you think people will sit up and pay attention when it continues to cost us billions of dollars because of natural disasters?

A: I think politicians should take a grip and explain clearly to people in language they can understand what is happening and what has to be done about it, and what it will be necessary to do if nothing is done sooner rather than later. It’s a long-term process and very difficult to say at what point it becomes indispensable, but it certainly is becoming indispensable. Different parts of the United States are suffering increasingly from change, whatever it may be.