Robert Rowley didn't exactly take the traditional route to college. In fact, you might say he has never had a “traditional” college experience. 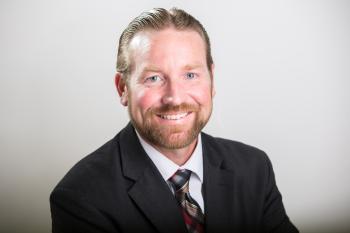 “My family didn’t have the money for me to go off to school or venture across Europe after graduation. I worked out of high school full time, got burned out and joined the U.S. Army at 20. I did that, got hired to law enforcement, got married and went on with life,” said Rowley.

He may not have taken a traditional route to Arizona State University, but now at age 46, Rowley is the fall 2017 outstanding graduate of the College of Public Service and Community Solutions at the Downtown Phoenix campus.

During his stint in law enforcement in his native California, Rowley decided he wanted to go for his bachelor’s degree. He found an online program and would often chip away at coursework late at night while stuck in the car on patrol.

It paid off, though. Rowley made his way up to deputy sheriff, and that’s where he stumbled into the world of emergency preparedness through coordinating search and rescue work in northern California.

Rowley had a knack for it, and when an emergency manager position opened up 2006, he went for it even though it was a profession still in transition following 9/11 and Hurricane Katrina. Eventually, his role expanded, and Rowley exited law enforcement to stay with his newfound job.

After moving to Arizona, Rowley began eyeing the Maricopa County emergency management director position. It was expected to open up within a few years, and he began exploring options to make himself a prime candidate. That included earning a graduate degree.

A friend told him he might be eligible for a Post-9/11 GI Bill, so he looked into it and discovered he still had two years of eligibility left. With the discovery of ASU’s emergency management and homeland security master’s degree program in the College of Public Service and Community Solutions and online class flexibility, Rowley decided the ASU was the perfect fit.

The twist in the story is the Maricopa County position opened up a short time after he started his degree, and Rowley got it. Once the degree was unnecessary for immediate career advancement, it took on new meaning.

“I started working with Dr. Gerber, and we began looking into how we could create pathways into the profession for graduates,” Rowley said. “My final project was to create a disaster response exercise that students can complete as a team — give students relevant experience to help them in the real world. Help them interview for these jobs.

"We need younger generations coming in who have fresh perspectives and a passion for the field. Helping them prepare for real-world jobs is the best thing we can do,” he said.

“We’re very happy to recognize Rob with this award,” said Brian Gerber, director of the Emergency Management & Homeland Security program in the College of Public Service and Community Solutions. "Rob is a key figure in the Arizona emergency management community, and he exemplifies a commitment to public service.”

ASU's emergency management and homeland security program is aimed at practitioners throughout the nation. Gerber says graduate students serve their communities and the nation in profoundly important ways related to emergencies, disasters, public safety and security.

He credits Rowley for creating a program within his department to help train the next generation of emergency managers.

“One important innovation Rob has set up in his office is an advanced internship program to guide the professional development of future emergency managers," Gerber said. "This collaboration between Rob and the Maricopa County emergency management office and ASU is of great benefit and advances a mission of preparing future leaders in the field.”

He already had the practical experience, but Rowley said the degree program really gave him insight into the theoretical side of his field. He was particularly fascinated by what makes a community resilient after a disaster.

Rowley stresses that citizens being adequately prepared to handle an emergency is key to surviving it.

“Whenever there’s a big disaster on the news, it’s usually to the point where people are without power, food and water. You hear about local and federal agencies struggling to get supplies to people,” said Rowley. “If everyone would take responsibility to be prepared for themselves and their families for three days, it would take a huge strain off government resources.”

One of the benefits of earning his graduate degree at ASU is his involvement with the Pat Tillman Veterans Center. It provided opportunities to get more involved in ASU life and to make a lifelong connection to the university.

“I started getting invited to veterans events, and even got to unfurl the flag on field at the veterans’ football game,” Rowley said. “I went from being someone attending online to feeling part of the whole ASU thing, and hopefully my boys will grow up being in love with ASU like I am now.”

Editor's note: This is part of a series of profiles for fall 2017 commencement. See more graduates here. Arizona State University graduating senior Tia Anderson, of Tonopah, Arizona, has been working for Dignity Health while studying full-time to earn her bachelor’s degree in interdisciplinary studies, with concentrations in business, and leadership and ethics. “Dignity Health is a non-profit...

Editor's note: This is part of a series of profiles for fall 2017 commencement. See more graduates here.

Arizona State University graduating senior Tia Anderson, of Tonopah, Arizona, has been working for Dignity Health while studying full-time to earn her bachelor’s degree in interdisciplinary studies, with concentrations in business, and leadership and ethics. 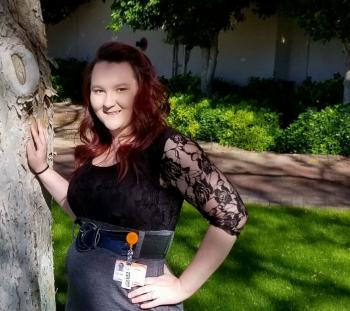 “Dignity Health is a non-profit that operates hospitals and clinics providing health, social, and support services,” Anderson said. “I started as a temporary worker and then moved to full-time employment while maintaining my full-time student status. By applying what I’ve learned through ASU, I was promoted twice within the organization and look forward to continual growth.”

One of the cornerstones of the interdisciplinary studies major is the required course BIS 401, for which students choose to complete either a semester-long applied internship or a directed study, working with faculty members on research.

Anderson was part of a team of four students in spring 2017 who worked with assistant professors Mai Trinh and Elizabeth Castillo, members of the Faculty of Leadership and Interdisciplinary Studies in the College of Integrative Sciences and Arts, reviewing and coding the literature for the content analysis of prior research studies on leadership.

The team just learned that the resulting paper, “In Search of Missing Time: A Review of the Study of Time in Leadership Research,” has been accepted for publication in the 2018 issue of The Leadership Quarterly Yearly Review.

“Tia impressed me with her dedication to the project, strong work ethic, and thorough analysis of the literature assigned to her,” Trinh said. “She asked good questions and was able to connect the leadership literature with her own lived- and work-experience to provide keen insights to our class discussion. We are grateful for the assistance that our students provided and acknowledge their help on the article.”

“When I first heard about this directed study opportunity, I was immediately excited,” said Anderson, who noted that the experience of doing the directed study did not disappoint: “There’s a great sense of accomplishment when you can use all of the skills you've acquired in your classes and be more involved with faculty and in producing new scholarship.”

Question: Why did you choose to attend ASU?

Answer: I was born and raised in Arizona, so it has always been a dream of mine to graduate from such a prestigious school in my own state.

A: I learned that I am a leader and that I inspire people every day. In grade school, I was a shy girl who found it difficult to make friends. When I first started at ASU I had a mandatory communications class, public speaking. I was terrified, but I conquered my fear and I learned that I am a good speaker and can connect easily with people if I allow myself to. With each class, I learned more and more about myself. Because I am introspective, I was able to become a better leader for myself and my peers.

Q: Looking back on your ASU career, do you see an interesting or defining moment or accomplishment that stands out for you?

A: I withdrew from the university in fall 2008. Most of the time, students who withdraw do not return. I beat this statistic by re-enrolling five years later in fall 2013. I feel like I have beat the odds and it shows me how much determination that I have. I try to live by this quote from novelist Ralph Ellison, "It takes a deep commitment to change, and an even deeper commitment to grow."

A: For now, I am going to enjoy some time off and hopefully travel with my family and continue my work with Dignity Health. I am considering going to graduate school and hope to complete a master’s degree related to interdisciplinary studies and leadership. I would also like to start my own non-profit, focused on providing housing for homeless families and veterans and connecting them to other services that they need, like healthcare.

A: I would try and tackle homelessness, especially among young adults and veterans. In my ASU course PAF 494: Ending Homelessness through Public Policy, I learned a lot of valuable information about the causes of homelessness, and I hope that even without $40 million I can make a difference by running a non-profit of my own one day.

A: I was mostly an online student, but the few times that I met with student work groups for classes, I loved going to Hayden Library at the Tempe campus. I also enjoyed the library at West campus. I remember one night I was leaving Hayden Library and there was a student event going on and there were some break dancers outside the library. What an experience to be working hard, walking out exhausted, and stepping out into such a lively and joyous event! It was instantly refreshing.