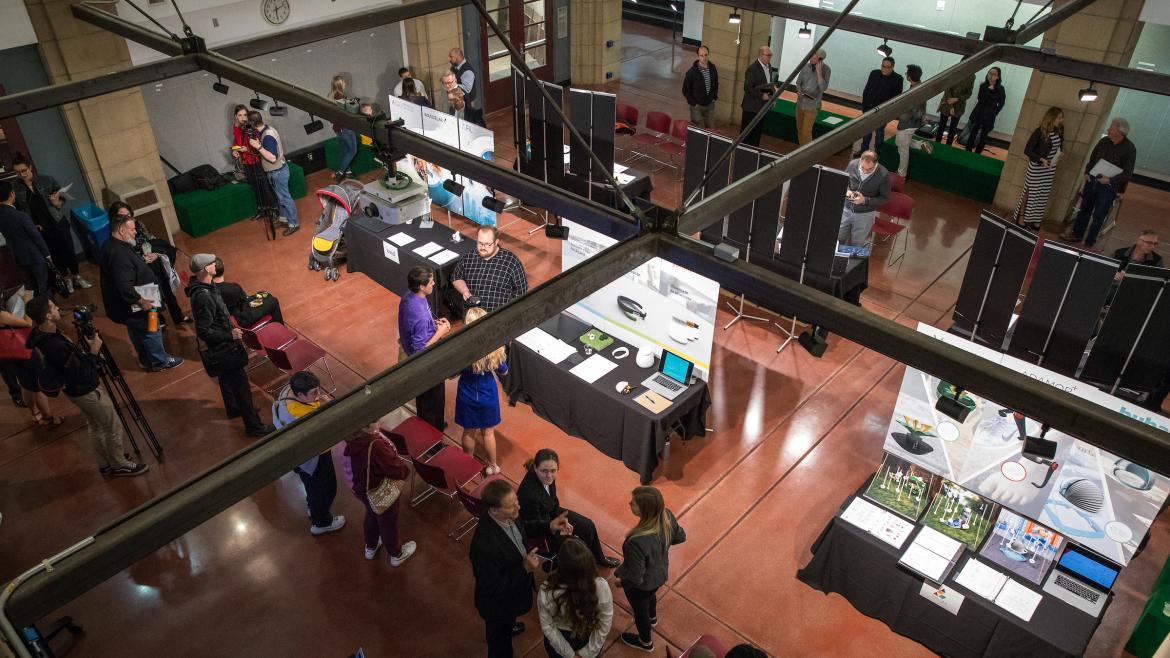 Changing the world with a product is not a one-man job — which is why the InnovationSpace program at Arizona State University combines the expertise of students in five different disciplines: industrial design, visual communication design, business, engineering and sustainability.

Sponsored by companies Adidas and Johnson & Johnson, this year’s InnovationSpace program encouraged six student teams to research, create, design and narrow down three products that not only solve a complex problem, but also reflect and adapt to their surrounding environment.

On Dec. 7 from 6 to 7:30 p.m., the program held a mid-year exhibition that showcased the teams’ projects on the lower level of the Design North Building.

“What we do in InnovationSpace is teach [the students] how to take on a complex problem, work in a transdisciplinary team and come up with solutions — solutions that are good for people, good for the planet, have business value and are well engineered, and that people can appreciate and need,” said Prasad Boradkar, director of InnovationSpace. 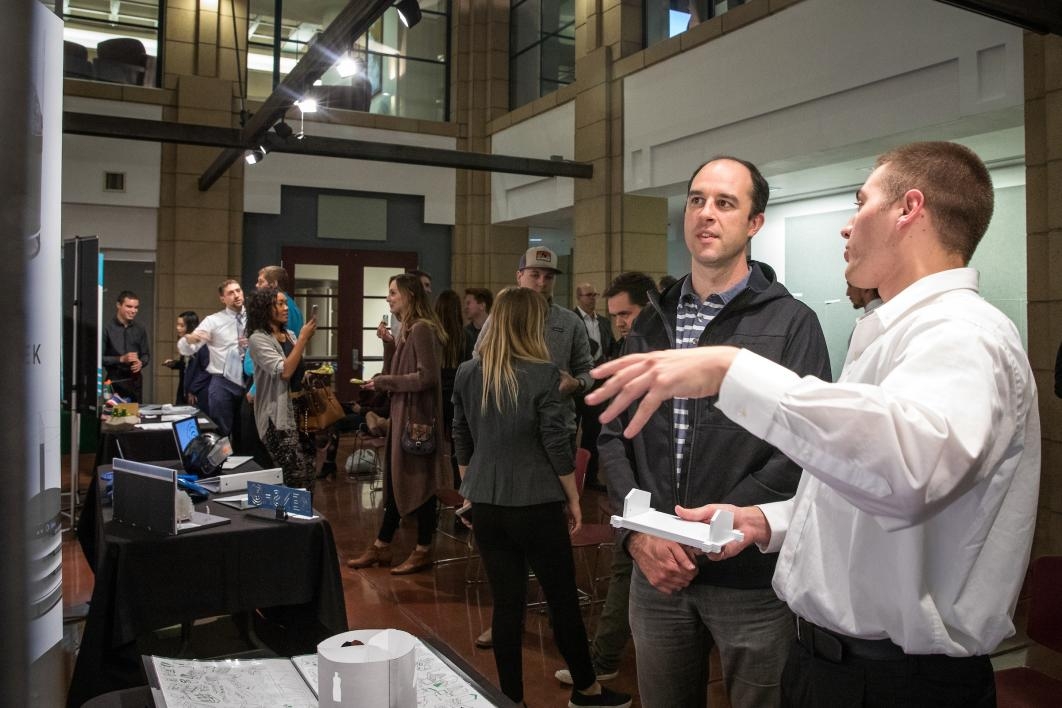 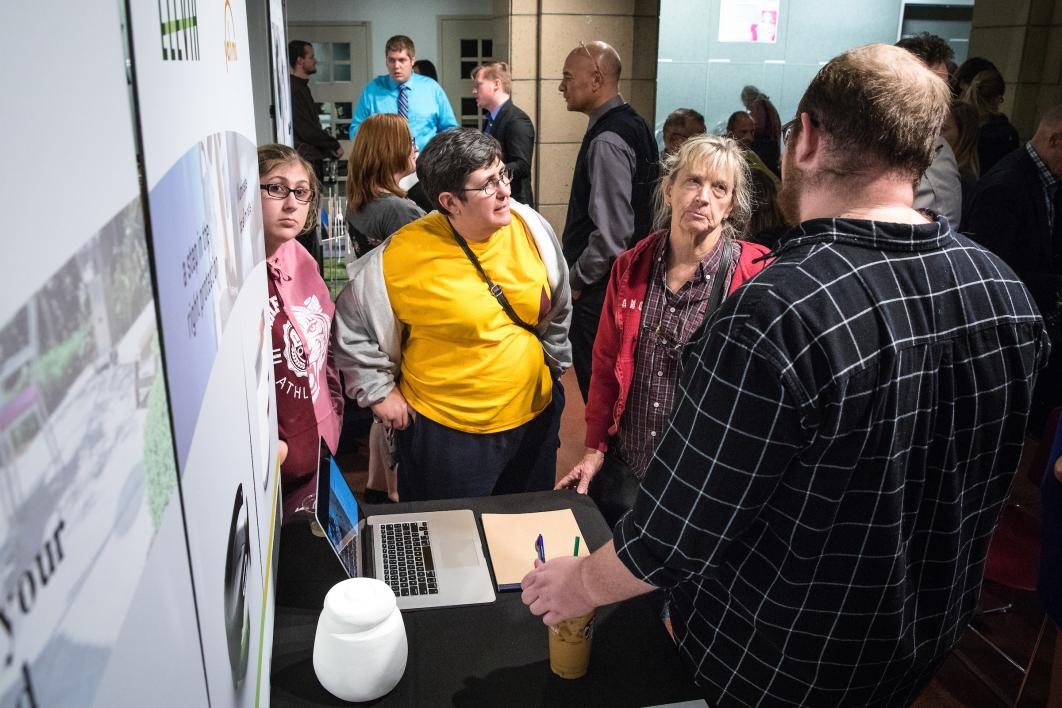 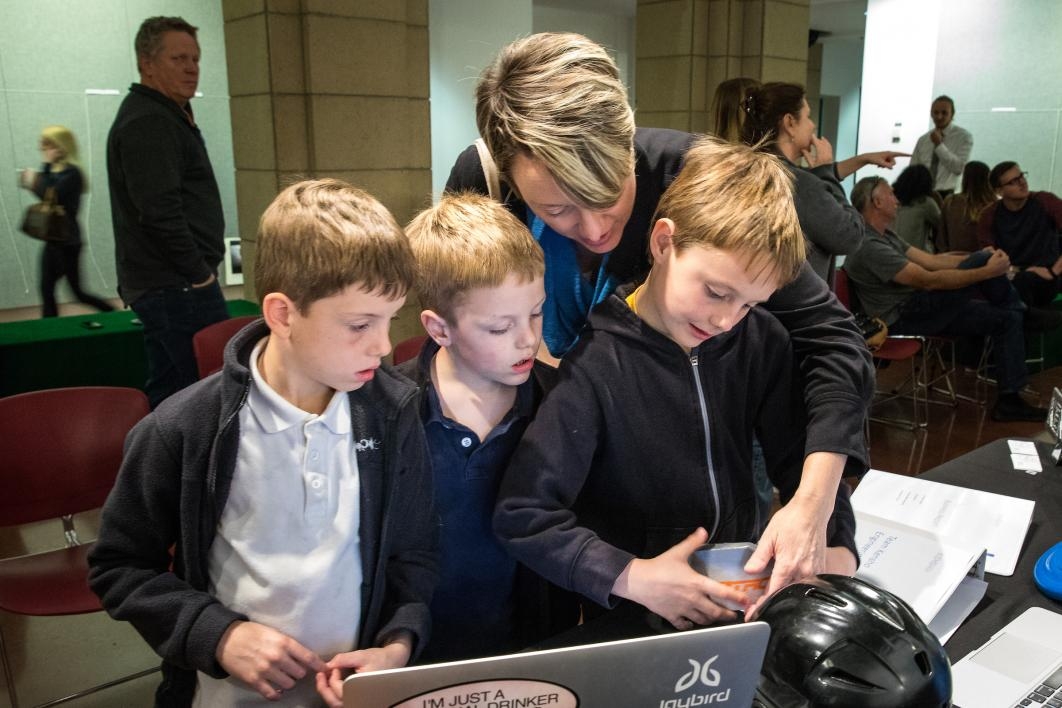 Brothers Nathan (left), 7, Turner, 5, and Simon Reynolds, 9, team up with their mother, Faye Farmer, director of research development at ASU's Knowledge Enterprise Department, at the Mid-Year InnovationSpace Exhibition. The group is checking out the Neurotact helmet sensor, a device that monitors impacts to the head. 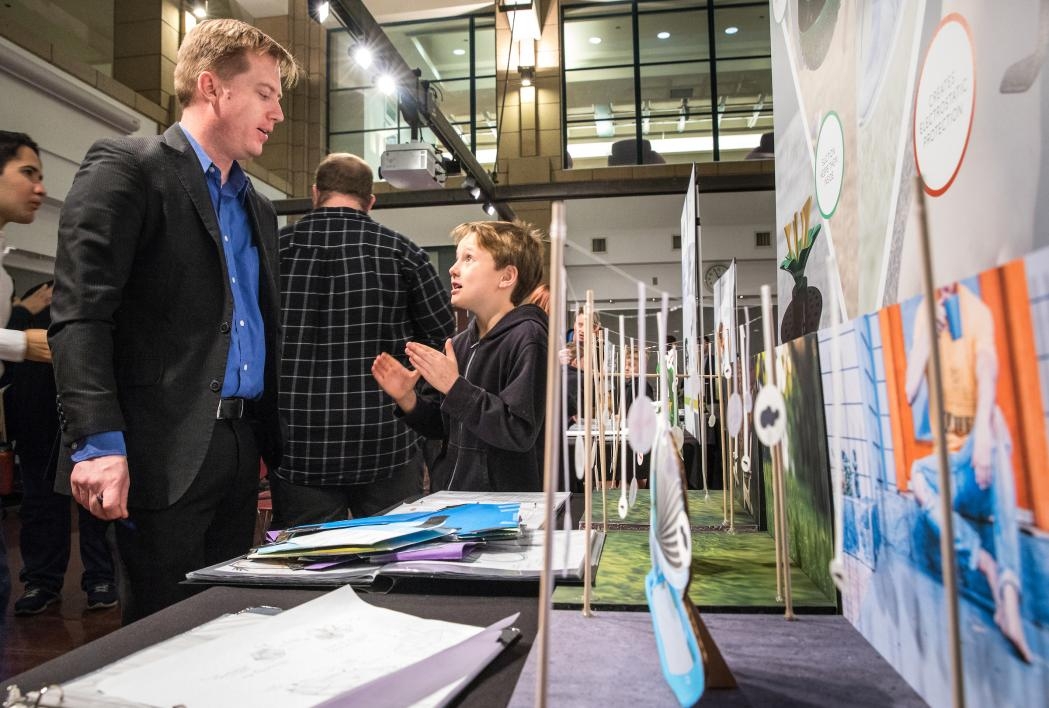 Nine-year-old Simon Reynolds talks with electrical engineering senior Chris Marrs at the Mid-Year InnovationSpace Exhibition. Marrs and his team worked on the Johnson & Johnson project Moscape, which works to attract and capture mosquitos.

Sydni Alaniz, a senior studying graphic design, worked with Johnson & Johnson and her team, Prism, to create a product that reduces the mosquito problem while also using principles of biomimicry.

Using the carnivorous pitcher plant for inspiration, one of the team’s product ideas, Moscape, was designed to mimic flowers and water droplets to attract mosquitoes before sucking them inside.

Next semester, each of the six teams in the InnovationSpace program will select a final product to further develop and market as their final project.

Nearly 900 high school students from all over Arizona gathered at Arizona State University’s Polytechnic campus on Friday, Dec. 8, to celebrate one of the state’s most important industries — agriculture.The 60th Arizona FFA Midwinter Conference hosted the 80 FFA chapters from Arizona’s high schools, including about two dozen from metro Phoenix.The students competed in activities such as f... 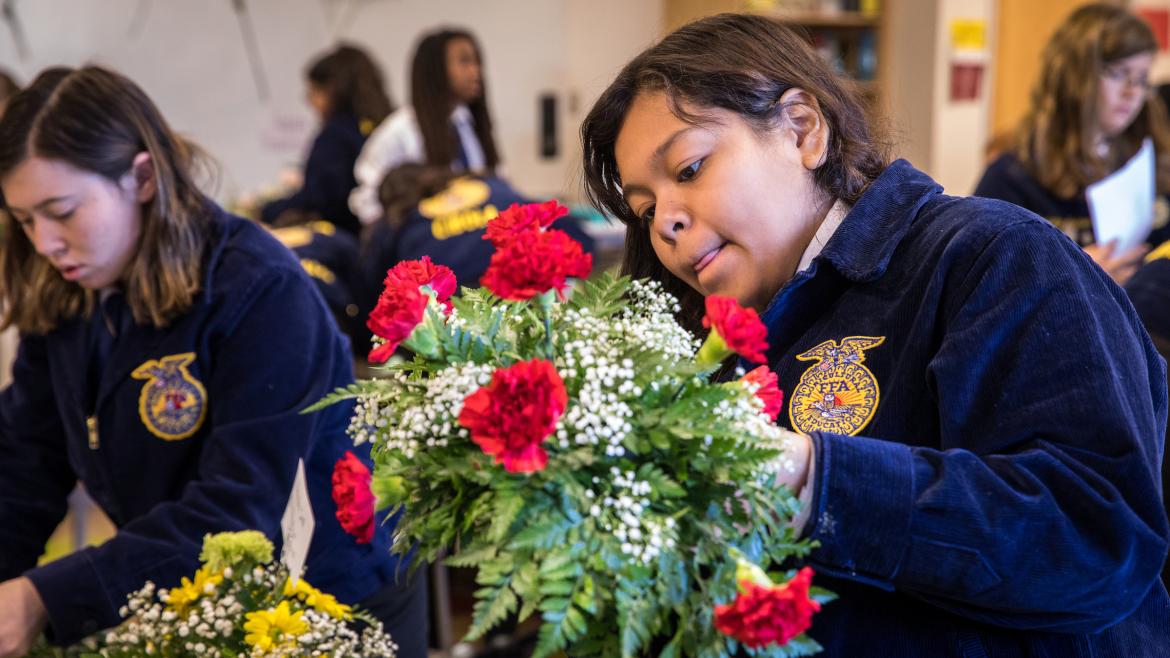 Nearly 900 high school students from all over Arizona gathered at Arizona State University’s Polytechnic campus on Friday, Dec. 8, to celebrate one of the state’s most important industries — agriculture.

The students competed in activities such as flower arranging, wildlife knowledge and food marketing; learned about careers in agriculture and forestry; and discussed how to debate controversial topics in the field, such as genetically modified foods.

While FFA stands for “Future Farmers of America,” the group also seeks out students who want to be teachers, scientists and businesspeople. The high school students raise livestock and learn about agriculture, but they also build skills in leadership and public speaking. 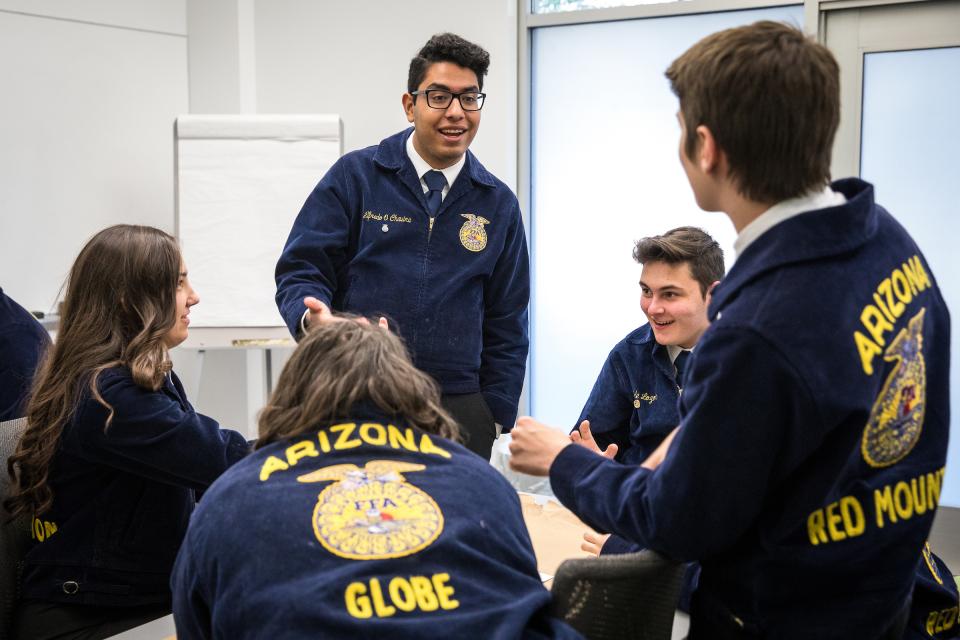 Alfredo Chavira, 17, of AAEC-Estrella Mountain charter school works with his group at the FFA Midwinter Conference at the ASU Polytechnic campus on Friday, Dec. 8. Photo by Charlie Leight/ASU Now

Future agricultural job growth will be huge, according to Mark Manfredo, director of the Morrison School of Agribusiness, which is based at the Polytechnic campus and supported the FFA event.

“A report came out recently sponsored by U.S. agribusinesses that showed that over 20 percent of all employees are related to agriculture and food,” he said.

“That will put a tremendous strain on the resources of this planet and how we will deal with that is that the interaction between technology and labor will be enhanced,” Manfredo said.

“You’ll see things in this industry that will change the world.”
— Mark Manfredo, director of the Morrison School of Agribusiness

He cited an employment outlook report released last year by the USDA’s National Institute of Food and Agriculture showing that 56,000 new jobs related to food and agriculture — half of them in business — will be open every year through 2020.

“When I talk to people in industry and recruiters across the supply chain, from farmers to food retailers to restaurants, I hear a common theme: We are concerned about the industry’s future,” said Manfredo, who also is associate dean of the W. P. Carey School of Business.

That's where students like those in the FFA chapters come in.

Antonia Pond, 17, of AAEC-South Mountain charter school and South Mountain Community College, makes a point while talking about organic foods at the FFA Midwinter Conference at the ASU Polytechnic campus on Friday, Dec. 8. Members of the Prescott Valley High School showed off a custom FFA boot vase at the FFA Midwinter Conference at the ASU Polytechnic campus on Friday, Dec. 8. Around 120 members of the FFA (Future Farmers of America) get their instructions after they finish their prom displays at the FFA Midwinter Conference. 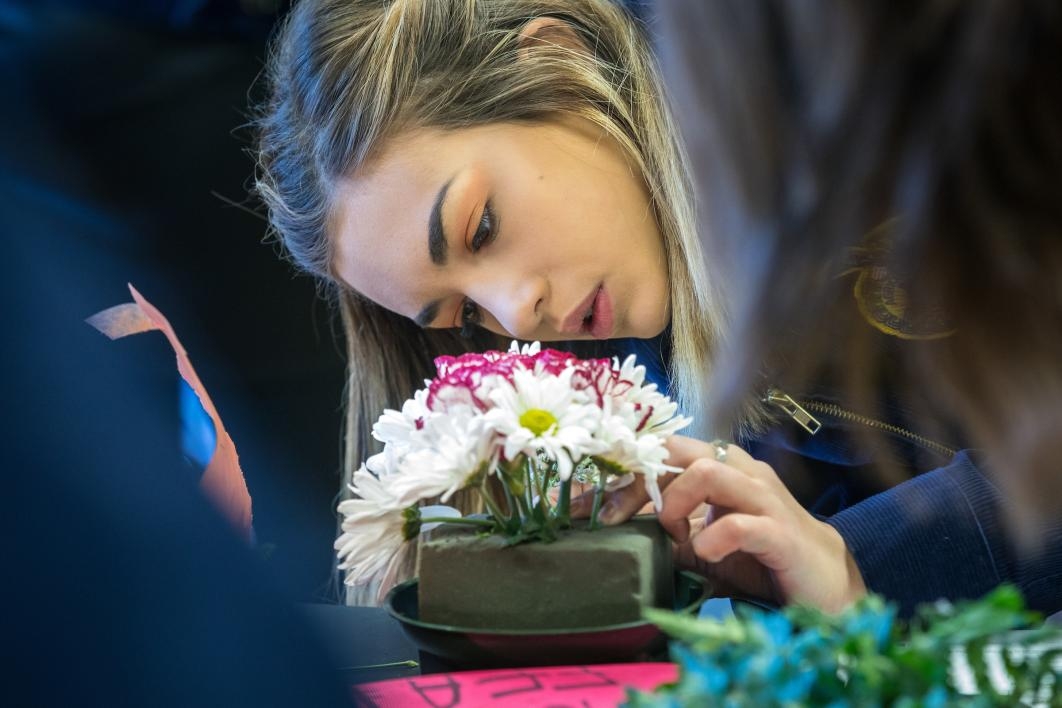 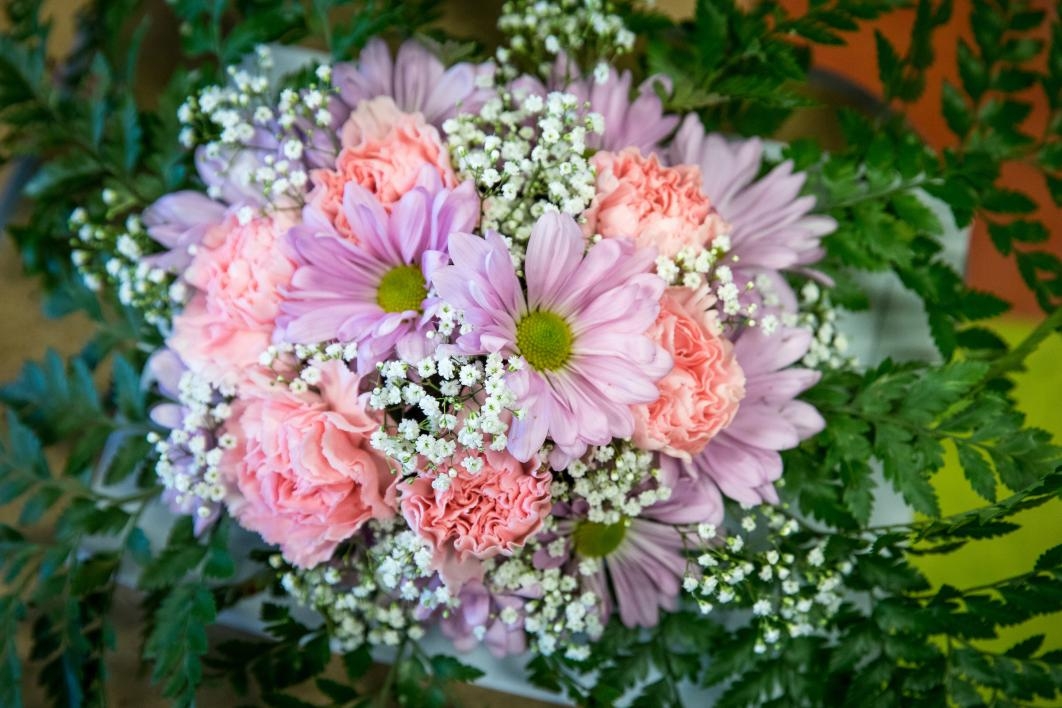 A finished $35 oval floral arrangement awaits judging at the FFA Midwinter Conference at the ASU Polytechnic campus on Friday, Dec. 8. Milton Shackleford, 17, from AAEC-South Mountain charter high school takes part in the "Sharing is Caring: Sharing the Importance of Agriculture" workshop at the the FFA Midwinter Conference. 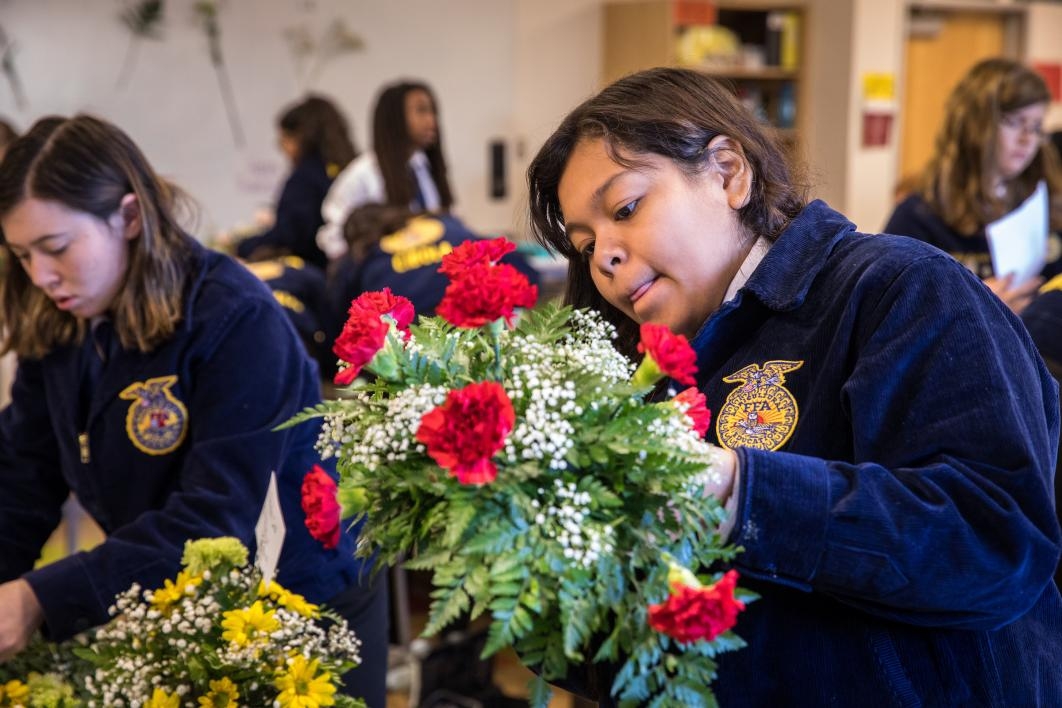 “We’re seeing a tremendous amount of retirements because of the baby boomers,” Manfredo told the students during the event's awards ceremony. “You’re future leadership and there’s boundless opportunity.”

ASU’s Morrison School of Agribusiness offers degrees in global agribusiness and food industry management, an occupation that is expected to see a 24 percent increase in jobs in the next decade with an average salary of $79,000, according to the USDA.

The high school students in the FFA are attuned to the events that are shaping the industry. The conference included a workshop called “Sharing the Importance of Agriculture,” in which the teenagers learned how to discuss touchy topics such as genetically modified foods. They talked about how to research and present facts and then they created skits promoting different viewpoints.

Antonia Bond, 17, a student at Arizona Agribusiness and Equine Center – South Mountain, a charter school, presented one view: “As our world population goes up and our farming population goes down, we need GMOs to produce more food.”

FFA is a student activity run in conjunction with a school’s agriscience curriculum, which is typically part of career and technical education. Kari Williams teaches floriculture and agribusiness at Chandler High School, which has 250 students in its FFA chapter.

“It’s still a lot of modern-day agriculture,” she said. “We have pigs on campus and we have a farm at Tumbleweed Park. We raise chickens and turkeys and process them.”

She sees many of her students go on to have careers in the field.

“There are a lot of kids who didn’t know they had passion for agriculture until they took the class,” she said. 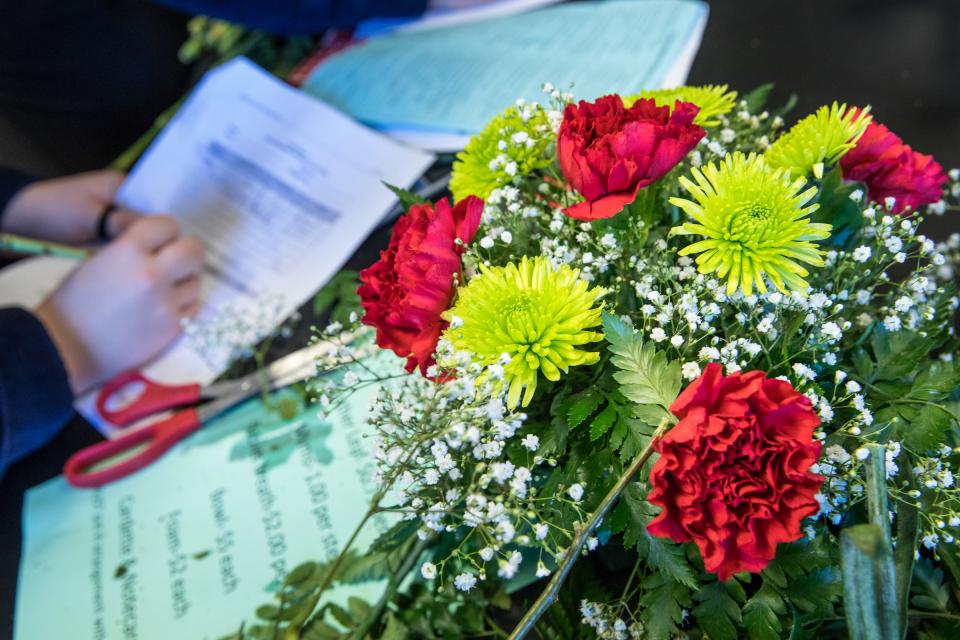 After completing her floral arrangement, FFA member Madison Barker, 16, of Camp Verde High School, accounts for the costs and materials at the Polytechnic campus on Friday, Dec. 8, 2017. Photo by Charlie Leight/ASU Now.

When the timed competition began, Theodoxa Baker, a sophomore at Yuma Catholic High School, began methodically clipping the stems of yellow flowers and pushing them into the wet foam. She had to calculate how many stems to use to create a $35 arrangement. At the end of the 25-minute limit, she had completed a charming little bouquet of yellow blossoms with a pink center surrounded by leaves and tufts of baby’s breath.

“I thought the green would look nice next to the yellow and then the idea for the design just came to me,” she said.

Some Valley high schools have had FFA chapters for decades, dating back to when the Phoenix area was still mostly agricultural. The chapters at Buckeye Union, Peoria, Chandler and Gilbert high schools are more than 85 years old.

Isaac Armenta is a senior at Buckeye Union High School and a state officer in the Arizona FFA. He talked about how he convinces people about the importance of the organization:

“But the most important part is all the friends I’ve met.”