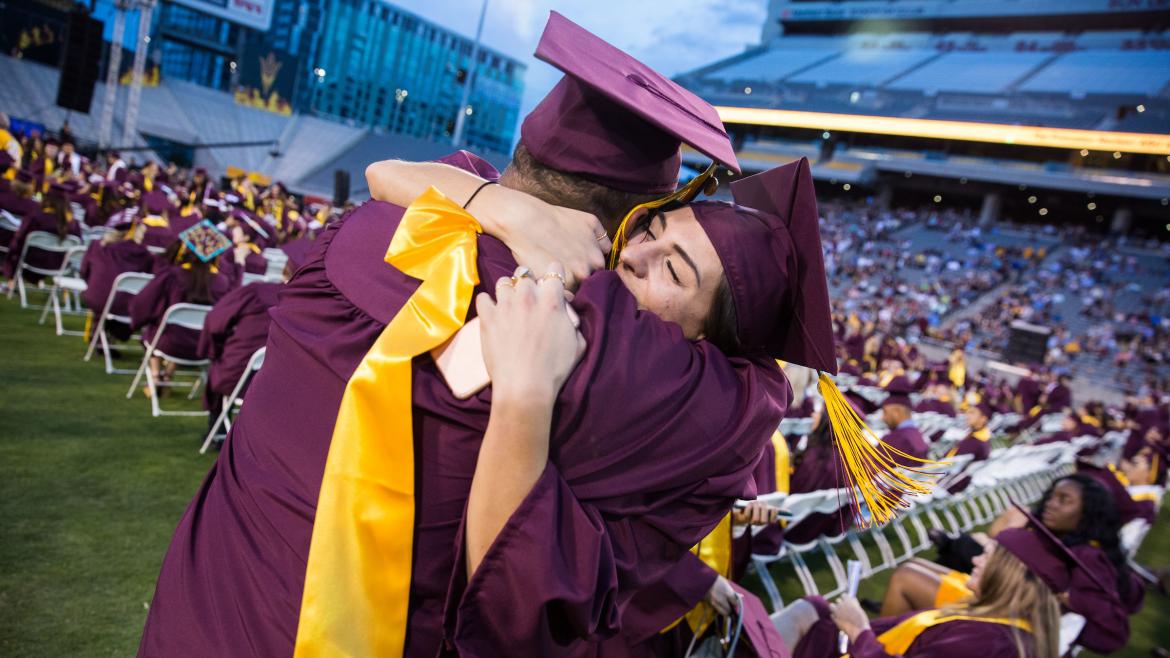 ASU fall 2017 commencement by the numbers

Nearly 7,700 new graduates will receive their degrees on Dec. 11

Arizona State University bid adieu to the fall semester of 2017, kicking off December with 28 graduation ceremonies over 12 days.

The total number of graduates heading out into the world with hopes, dreams, shiny new knowledge and a sheepskin under their arms is 7,671.

Of that total, 5,576 are undergrads and 2,095 are graduate and doctoral students.

This fall’s class tops last fall’s by more than 600 students.

Slightly more women than men earned their bachelor’s degrees: 52 percent versus 48 percent. That held true at the advanced level for those earning master’s degrees or doctorates: 52 percent women over 48 percent men.

Arizonans dominated those receiving bachelor’s degrees, with 59.3 percent of the Class of Fall 2017 hailing from the Grand Canyon State.

Almost 36 percent of students receiving advanced degrees such as master’s degrees or doctorates were from Arizona. Kyle Mohr was one of them, earning a Master of Science in geology from the School of Earth and Space Exploration.

The Cave Creek native was working in South Carolina, doing groundwater monitoring for the state department of natural resources. He realized he didn’t like what he was doing, and he wanted to study geology. He moved his family across the country and set to work at ASU.

“He has demonstrated discipline and commitment and is developing the skills to become a good scientist," said his adviser, David Williams, director of the Ronald Greeley Center for Planetary Studies.

Read more about Mohr and other outstanding fall 2017 graduates in our profile roundup. 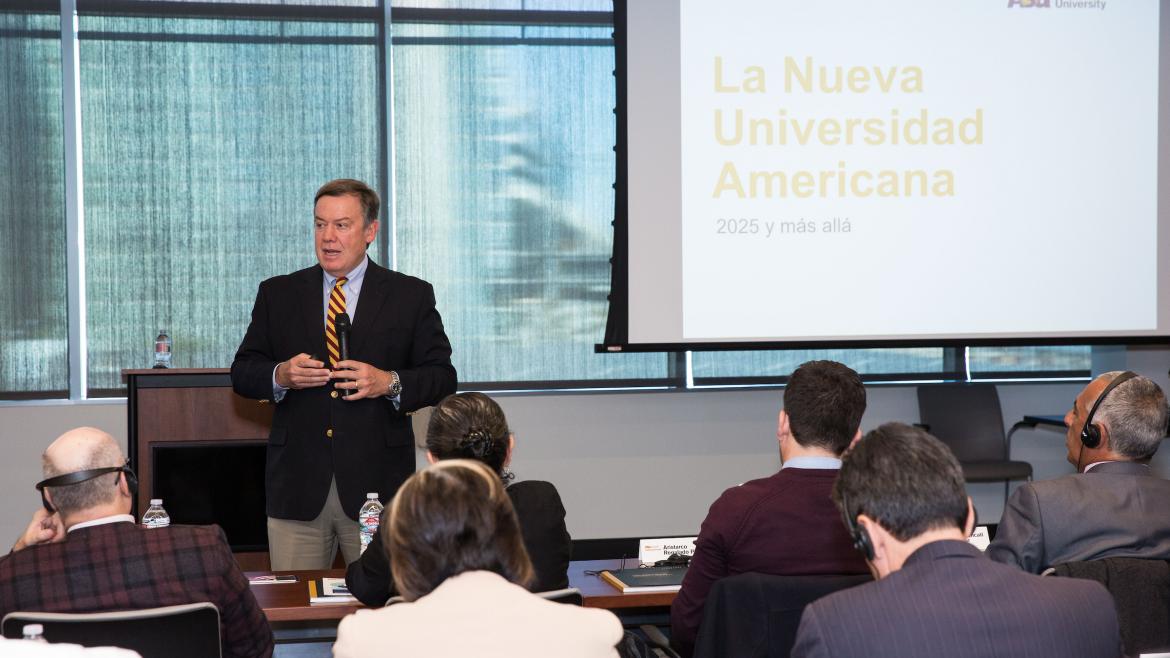 University of Guadalajara to open office at ASU for cross-border collaboration.
December 7, 2017

The University of Guadalajara and Arizona State University, both innovators, partnered this week to discuss how the institutions can make big changes quickly.

Thirty top-level administrators from the University of Guadalajara spent three days at ASU in an “Innovation Leadership Program” this week, hearing how ASU President Michael Crow has created the New American University.

Crow said that both institutions have accepted the responsibility to improve life not only in their respective communities but also in North America and around the world.

Both universities are large. The University of Guadalajara, which was founded in 1791, has 15 campuses and an enrollment of more than 280,000 vocational, high school, undergraduate and graduate students. It also operates an online program and more than 40 research centers including the Manantlan Institute of Ecology and Biodiversity Preservation and the Center of Western Seismology and Volcanology Studies.

Crow described the changes he propelled at ASU when he arrived 15 years ago, including eliminating 80 academic units and expanding access.

“We did away with the geology and political science and philosophy and astronomy departments and we created transdisciplinary schools that have tremendously outperformed all previous structures,” he said. “Every student that is qualified to attend a research university will have access to this university — there are no artificial admission standards.”

ASU also has worked to better reflect the socioeconomic diversity of Arizona.

“Twenty percent of our students come from at or below the poverty level, and a few years ago it was at 2 percent,” Crow said. “We’ve improved our graduation rate by 85 percent.” 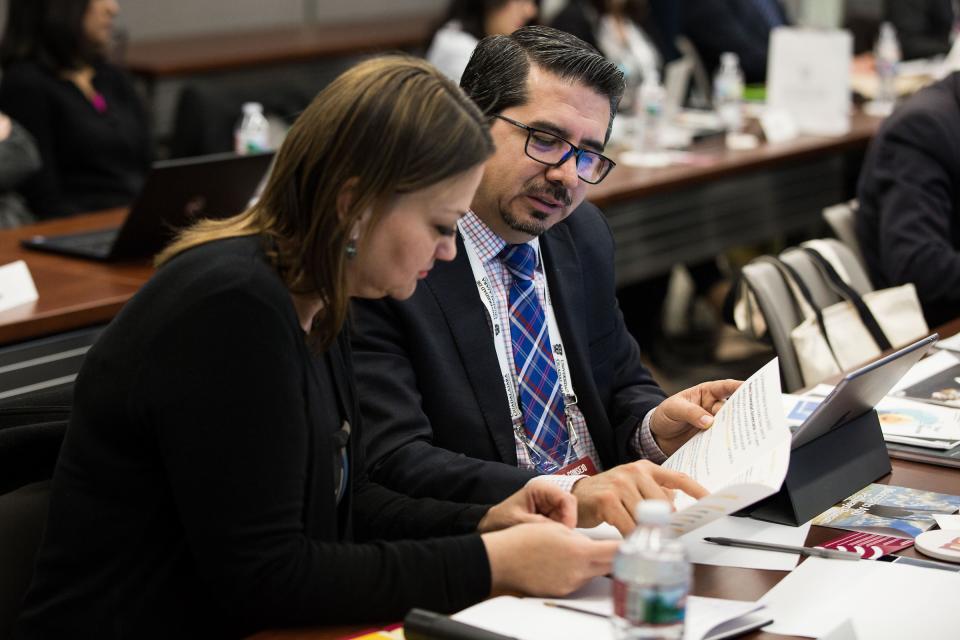 Maria Felicitas Parga Jimenez and Alberto Castellanos Guterriez were among 30 top administrators from the University of Guadalajara who attended the "Innovation Leadership Program" at ASU this week. Photo by Deanna Dent/ASU Now

Crow said the faculty not only accepted profound change but were empowered to design it.

“Everything was on the table. We changed the culture from a bureaucratic, military-like structure of a university where no one was willing to change anything,” he said. “The faculty took that seriously and they came back with a brilliant design — a new School of Life Sciences that has 120 faculty and no departments.”

Carlos Ivan Moreno, the vice provost for international affairs at the University of Guadalajara, said that ASU’s culture is impressive.

“In every process, at different levels of the institution, this motivation to innovate permeates the whole university,” he said. “It’s very difficult for institutions as complex as universities to do that at a massive scale.”

Moreno said that Guadalajara also seeks to innovate, having transformed itself several years ago when it decentralized and built a network of 15 small universities within the state of Jalisco.

“This decentralization allowed us to grow without compromising academic quality and to take the university to underserved communities instead of bringing students to the metropolitan area of Guadalajara,” Moreno said.

Over the past four years, more than 300 students from the University of Guadalajara have studied at ASU and a handful of Sun Devils have traveled to Jalisco for a summer immersion program.

Next year, the University of Guadalajara will become the first international university to open a field office on ASU’s campus to further develop cross-border collaboration, such as joint research projects, student and faculty exchanges and other initiatives. 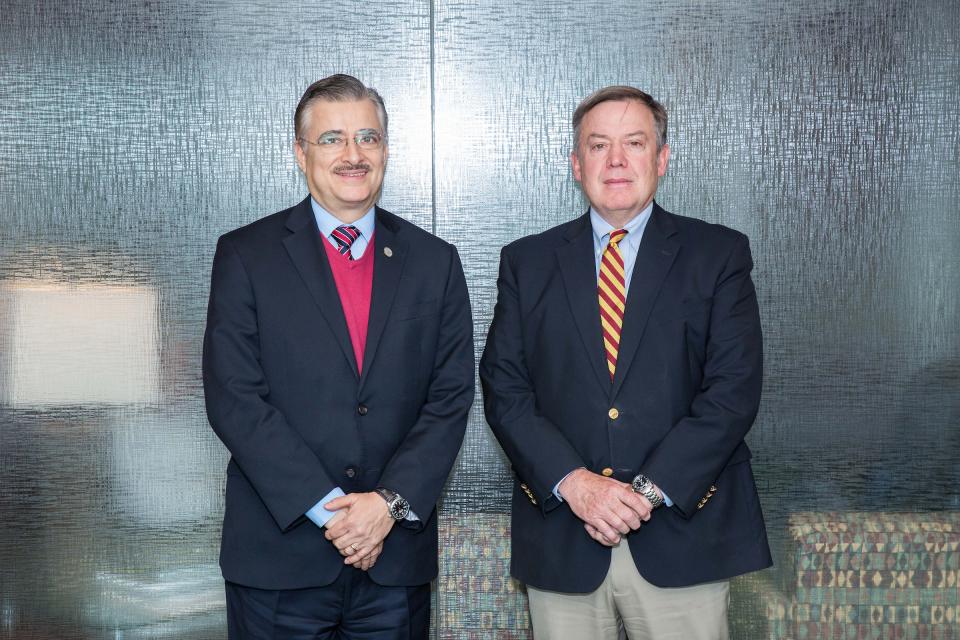 At the workshop, the Mexican educators heard about several ASU projects that remove obstacles to student success. These include:

Creating a high school pipeline: ASU Prep Digital is a new online high school that allows students to take ASU courses for credit at the same time they are working on their high school diploma.

“We create a college-going culture with kids so they start to think of themselves as a college-going student at an early age,” said Julie Young, CEO of ASU Digital Prep.

Simplifying the application process: ASU’s admission and enrollment services wanted to eliminate a common barrier — submitting a formal high school grade transcript. So applicants to this year’s freshmen class were allowed to “self-report” their grades, according to Matt Lopez, executive director of admission services.

Half the applicants sent a transcript and half self-reported. Of the total number of students who were accepted into the class of 2021, 62 percent were from the self-reported group.

“Human nature might say, ‘They didn’t give the right grades,’ but we do require a transcript after they’ve been admitted and we verify what they report,” Lopez said. “We concluded that this change has opened the door to many wonderful students.”

Boosting success in the first semesters: ASU offers 370 degree options and that can be overwhelming to students, according to Fred Corey, vice provost for undergraduate education.

Freshmen who are undecided must choose one of four “exploratory” tracks, which they can do for no more than three semesters. Students take a one-credit class each semester to help them make a choice.

“Some students are decision-phobic,” Corey told the visitors. “They’re afraid the rest of their life will be pre-determined, but we tell them they’re building a portfolio.”

ASU also has changed the way some students take their “gateway” courses, such as college algebra, which had high failure rates, said Arthur Blakemore, vice president for student success.

“When students struggle in these courses they will drop out of the university, so we want to improve retention and graduation by improving success in these courses,” he said.

So now several gateway courses, including introductory biology and physics, are done online through an “adaptive learning” model, in which students learn small chunks of content at a time, being tested for mastery before moving onto the next level. More students are passing than with the previous lecture model, he said.

Last spring, Crow visited Guadalajara to meet with Itzcóatl Tonatiuh Bravo Padilla, president of the University of Guadalajara, and the faculty, describing academic strategy, student support, growth of online learning and the future of higher education.

“Arizona State University and the University of Guadalajara, as public institutions, reaffirm their commitment to work to strengthen their academic communities,” Bravo Padilla said.

“To learn from each other’s experiences that will contribute to the development of society through education, innovation, science and technology.”

Top photo: ASU President Michael Crow addresses a group of 30 leaders from the University of Guadalajara on the Tempe campus Dec. 7. Photo by Deanna Dent/ASU Now