Alexandra Birch is a violinist. This Dec. 11, she earns her Doctor of Musical Arts degree from Arizona State University. She is also a musician who understands the importance of historically informed music performances. 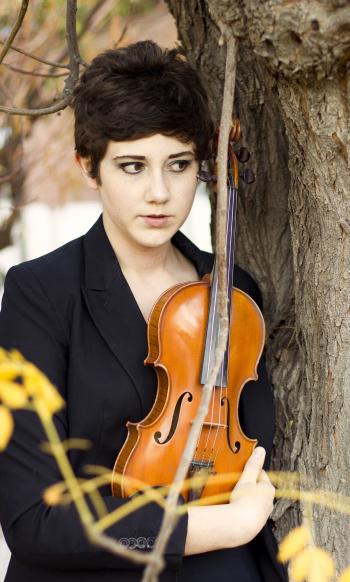 Birch spent the summer of 2017 learning to speak and write Armenian to further her research on music surrounding mass atrocities in the former Soviet Union.

She was awarded a language grant from the U.S. State Department's Program for Research and Training on Eastern Europe and the Independent States of the Former Soviet Union to study less commonly taught languages. The program was offered through ASU, with the primary focus on language acquisition, and included a six-week course in Tempe and five weeks of language immersion in Yerevan, Armenia.

“I think that language acquisition is vital for the (Doctor of Musical Arts) student,” said Birch. “I was fortunate to come into both the masters and doctoral programs at ASU with academic language proficiency in French, German and Russian.”

Her research broadly focused on comparative cultural commemoration of genocide in the former Soviet Union and included study of the Armenian Genocide, Holodomor and the Holocaust in Soviet Territories. She looked at how commemoration affects statehood post-1991 and the types and effect of commemoration.

Birch was particularly interested in the Soviet commemorative response to the Armenian genocide and in the commemorative works — pieces composed in camps and ghettos, music from gulags, music from persecuted people — and reconstruction of narratives using music prior to the genocide.

Birch conducted her research at Tsitsernakaberd, the Armenian national genocide museum and archive. She utilized her German, Russian and Armenian language skills to conduct research she incorporated into her doctoral paper on historically informed performances. Birch’s D.M.A. project focused specifically on Soviet composer Sofia Gubaidulina and a specific work for violin, "Dancer on a Tightrope.”

Birch said she hopes to see more interdisciplinary work between humanities and music at ASU. She said that ASU has a fantastic music program and that she felt tremendously supported by her advisor, her committee and faculty in both her musical and academic pursuits.

“I would also love to see even more of an emphasis on the importance of language, in addition to musicology and theory in the performance realm at ASU,” said Birch. “I think that these skills in the humanities only serve to enrich our performances and musical interpretation.”

Answer: I attended a performance of Nadja Salerno Sonnenberg playing a Shostakovich violin concerto with the Tucson Symphony when I was about 10 years old. I had been studying violin for a while and her playing had always inspired me on recordings, but seeing her perform live was what inspired me to pursue a career in performance. I also was extremely drawn to the piece and have dedicated most of my performance career to Soviet music. To pursue a career in performance, I have been very blessed with a very supportive family, particularly my mother and husband. While at ASU, I also have had fantastic guidance from my professor, Katherine McLin, who has continually inspired me to continue in the career beyond just a childhood dream.

Q. What’s something you learned while at ASU — in the classroom or otherwise — that surprised you, that changed your perspective?

A. I would say that Professor Sabine Feisst's classes during my graduate studies have been a major influence on my current career track. Her courses really emphasize different tracks that are possible in performance, both with 20th- and 21st-century music, and also with research. I have been able to add a strong research component to a performance degree, and she has been a wonderful mentor in that regard.

Q. Why did you choose ASU to pursue a bachelor's degree, master's degree and doctorate?

A. I chose ASU for all three of my music degrees because of my outstanding studio, mentorship with Dr. McLin and the ability to continue academic research while studying performance. ASU has a fantastic combination of strong academic, collaborative and performance faculty.

Q. What’s the best piece of advice you’d give to those still in school?

A. My advice to those still in school is to expand your set of skills! Any secondary skill you can add to your academic portfolio will serve you well. This is true for any major and in any job market. I particularly think that foreign language skills are a fantastic way to open new opportunities in the U.S. and abroad, but any strong secondary interest to your major will open new possibilities in your field.

Editor’s note: This is part of a series of profiles for fall 2017 commencement. See more graduates here.Steven Henderson, a top political science graduate from ASU’s Polytechnic campus, has always had an interest in government, politics, and international relations.“My father, now retired from the federal government, taught me a lot about it at a young age,” said Henderson. “I was fasci...

Steven Henderson, a top political science graduate from ASU’s Polytechnic campus, has always had an interest in government, politics, and international relations. 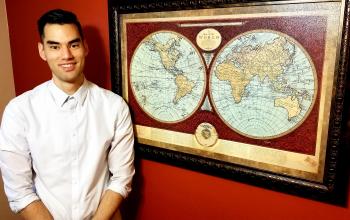 “My father, now retired from the federal government, taught me a lot about it at a young age,” said Henderson. “I was fascinated learning about government procedures, about the role of each government branch, and a memorable moment of my childhood was visiting the National Archives Museum in Washington, D.C., actually seeing the documents that shaped this country and built what we have today.

“I knew even then that when I grew up I wanted to be in some sort of government role. I have always wanted to be in a position to have a lasting impact on others while providing service to the community.”

As Henderson grew up, his interest in social studies, history, and government courses bolstered his passions, and his focus expanded to global affairs.

“I knew I didn’t want to just read about issues or watch what was happening, I wanted to do something,” he said.

After graduating from Mesa High School, Henderson enlisted in the U.S. Army. He said his military service further informed his college and career plans.

“I was a military police officer stationed at Fort Campbell,” Henderson said. “This unique installation is in both Tennessee and Kentucky, which means that laws of both states are enforced. The interaction among different institutions made me curious as to how the design and implementation of these policies occurred. Further, dealing with the public and local law enforcement agencies on a near-daily basis reinforced my determination to contribute to public service in the civilian sector."

When he graduates Dec. 11 from ASU’s College of Integrative Sciences and Arts, he’ll also have completed a minor in organizational leadership. He plans to earn at least two other degrees from the university.

“From my first course in political science at ASU to my last,” he said, “the information and knowledge I’ve gained has been a constant reminder that I’ve chosen the correct path.”

Question: Why did you choose to attend ASU?

Answer: As ASU continues to grow and expand, it’s achieving national renown. ASU provides a learning environment where students can feel engaged in their discipline. I chose ASU because I wanted to be a part of this engaged learning and also because of the university’s concentration on student success.

A: I now understand that each of us comes from a different background that provides us with different perspectives, experiences, and insights. When seeking to make changes in this world, we too often let these differences hinder human progress instead of using these differences to solve today’s problems and develop the foundation for solving tomorrow’s. We are bounded by our own rationality and tend to make too many decisions that are satisficingSatisficing (derived from satisfy and suffice) is a strategy in decision-making that searches through possible solutions for a satisfactory result instead of an optimal one. rather than optimal.

Q: Looking back on your ASU career, do you see an interesting or defining moment that stands out for you?

A: The most defining moment of my ASU career occurred during my final semester, in the course ISS 456: Culture, Conflict, and War with Dr. Keith Hollinger. As a class, we started from the ground up by analyzing the conflict of North Korea and we culminated with developing a conflict assessment plan. The analysis, research, and discussion made me realize that I have a passion for conflict resolution and it has helped me direct my plans for continuing education.

A: I plan to complete an additional major in software engineering and then pursue the master’s in integrative social science. I hope to combine these disciplines to create a new line of communication between the social sciences and STEM, to contribute to solving complex social and global issues in an integral way.

A: Information is the most powerful weapon that exists in the world. There are a number of countries with governments that strictly prohibit access to certain information. Many of these countries, such as Eritrea and North Korea, enforce severe punishment on journalists or those with possession of non-authorized materials. With $40 million, I would initiate steps to get external information into the hands of citizens.

A: The classroom, because it’s where the learning and experiences are the most impactful. Alternatively, the Poly academic center which is the hub for studying, tutoring, and career needs.