And now they have a new leader in health research who aspires to usher tribal nations across the country into a new era of medical discovery, treatment and support.

David R. Wilson, an Arizona State University doctoral graduate and a Native American, is the first director of the Tribal Health Research Office at the National Institutes of Health in Bethesda, Maryland, which was established in 2015.

In addition to overseeing a current research budget of $130 million and several hundred health initiatives for Native Americans, one of his first collaborative efforts is helping to support an ambitious national health initiative designed to develop more tailored prevention strategies and treatments based on individual differences in lifestyle, environment, and biology.

The historic effort’s goal is to gather data over many years from 1 million people in the United States with the ultimate goal of accelerating research and improving health.

Under Wilson's guidance, his office is working with the All of Us Research Program to increase their efficacy when conducting outreach to tribal communities nationwide.

Wilson said getting tribal communities to engage in an initiative like this takes a nuanced and sensitive approach. As a member of the Navajo Nation, he is acutely aware of historical issues involving research and tribal communities.

“We have to be cognizant that when we do this type of work, we recognize the different cultures, traditions and governments of individual tribal nations,” Wilson said. “We also have to be able to incorporate their ways, their thinking into this approach and provide to them the benefits of high-level research.” 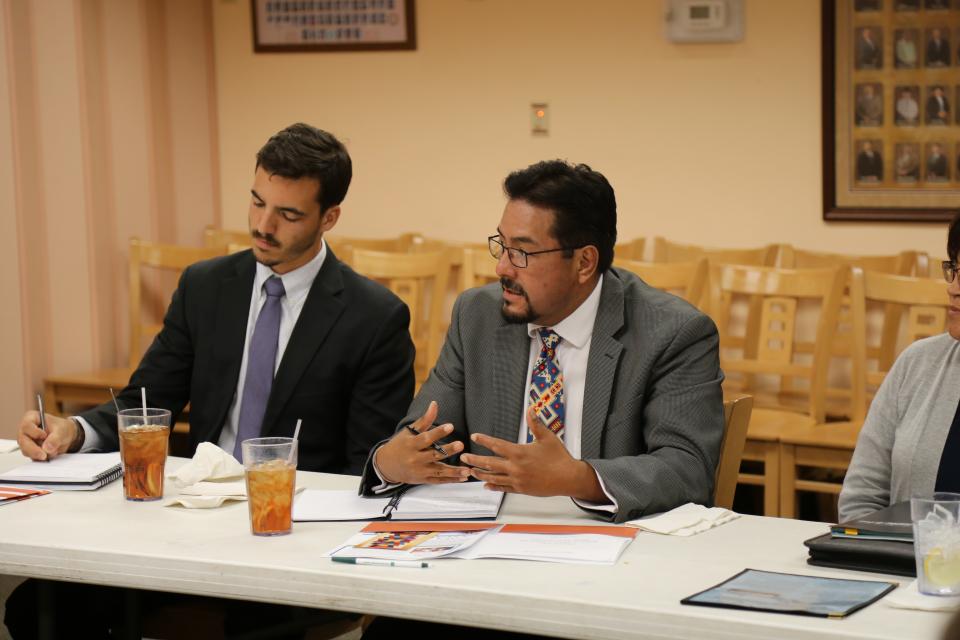 Wilson says he has always been curious by nature, growing up in Manuelito, New Mexico, near the Four Corners region.

“The thing about growing up in a remote area is that you can’t always buy something new when something breaks down, so we were always encouraged to fix things,” Wilson said. “I’d pull something apart to see how it worked and then put it back together again. I’ve learned that I like many others learns best by hands-on experience.”

Working under his father, who was a master mechanic, Wilson fixed brakes and transmissions when he was a teen working for a car dealership in nearby Gallup, New Mexico, where he applied that same philosophy.

He originally started his academic career as an engineer. He said he struggled financially, academically and personally.

“A lot of Native American students have trouble identifying who they are because they’re usually the only indigenous people in those programs,” Wilson said. “It’s only natural to ask, ‘Am I in the right place? Do I deserve to be here? Am I an imposter?’ ”

He says that feeling never wore off, but he was able to better understand what he was feeling through emerging research in the area of STEM and diversity. At the end of a long and grueling sophomore year, Wilson signed up for an internship opportunity at the Rocky Mountain Biological Laboratory in Gothic, Colorado. There Wilson studied the Colorado Silvery Blue Butterfly and why their eggs are laid singly on flower buds and young leaves of the host plants.

“The experience of chasing butterflies for eight weeks was like the flick of a switch,” he said. “After that, I knew exactly what I wanted to do for the rest of my life.”

Wilson graduated in May 2007 with a doctoral degree in molecular and cellular biology from ASU, drawing parallels to “a unicorn” by one faculty member.

“Dr. David Wilson is a Native man, with a PhD in a heavy-duty science field, leading a national organization to create positive health futures for Native communities, and leading by example,” said Bryan McKinley Jones Brayboy, President’s Professor, director of the Center for Indian Education and ASU’s special adviser to the president on American Indian Affairs. “In many ways, he’s a unicorn — a mythical creature of unparalleled wisdom. ASU should be very proud to have played a role in his intellectual and professional development. He’s doing amazing work in an important arena. That he remains humble and grounded makes him even more special.”

Despite the accolades, Wilson said his academic experience wasn’t without its challenges. He said the new concepts of things you couldn’t see with the naked eye were often hard to grasp, the workload was heavy and the constructive criticism was emotionally rough.

“It’s hard to receive constructive criticism when you’re young and developing, and you don’t understand the overall goal of its purpose,” Wilson said. “Through time and experience, you begin to understand your instructors and mentors are trying to help you become a better writer, scientist and problem solver.”

One of the instructors who continually challenged Wilson was his doctoral mentor, Yung Chang, a professor and immunologist in ASU’s School of Life Sciences. Wilson credits her with preparing him for the rigors of a career in research.

“David was a very special student in that he quickly assumed a leadership role in the lab, a very hands-on learner,” Chang said. “He was persistent and goal-oriented and had aspirations to do big things. He was a dreamer, but he never gave up. He was a great problem solver.”

Since then he has been solving problems on behalf of Native American health: as a senior research scientist at the National Institute of Aging in Baltimore, Maryland; as a public health adviser in the Office of Minority Health at the Department of Health and Human Services; as a legislative analyst in the office of the director at the Indian Health Service; as an adjunct professor at the Johns Hopkins School of Public Health’s Center for American Indian Health; and in January 2017, the first named director of the Office of Tribal Health Research.

Wilson credits his meteoric career rise to his doctorate degree from ASU.

“My PhD gave me a whole new perspective on my career moving forward,” Wilson said. “There were no more expectations of me. I had surpassed everyone’s expectations of me, so whatever I did from that time forward was going to be fun.”

Fun, in this instance, means coordinating more than 250 health initiatives — ranging from substance misuse to mental health to workforce development to diabetes — on behalf of Native Americans throughout the country.

He said his biggest goals in his new position are to take a systematic and scientific approach to problem solving, to offer up effective research to tribal communities and to be a father, mentor and role model for Native peoples to the best of his abilities.

“That is a priority of this office, and we have the capacity to do this,” Wilson said.

An Arizona State University economist expects the state to continue attracting people from other states but said that additional population could put a strain on Arizona’s resources.Lee McPheters discussed the outlook for Arizona at the 54th annual Economic Forecast Luncheon on Wednesday, sponsored by the W. P Carey School of Business at ASU and JP Morgan Chase and Co.“We expect steady, sustai... 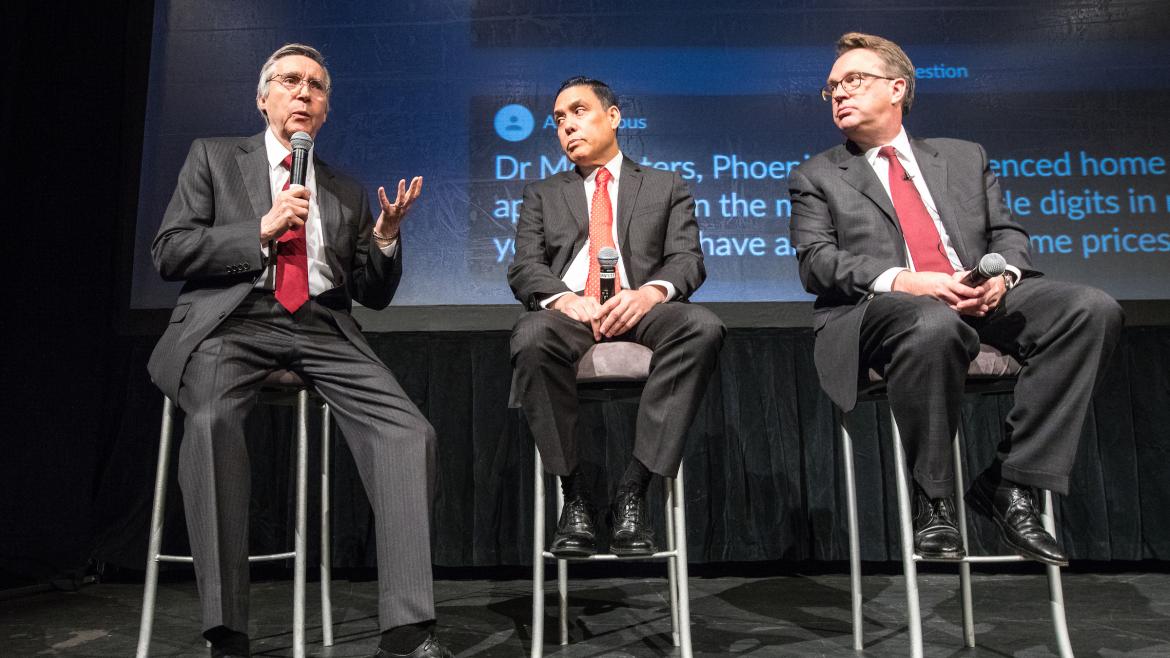 An Arizona State University economist expects the state to continue attracting people from other states but said that additional population could put a strain on Arizona’s resources.

Lee McPheters discussed the outlook for Arizona at the 54th annual Economic Forecast Luncheon on Wednesday, sponsored by the W. P Carey School of Business at ASU and JP Morgan Chase and Co.

“We expect steady, sustainable but not spectacular growth — certainly better than most places,” said McPheters, research professor of economics in the W. P. Carey School of Business and director of the school's JPMorgan Chase Economic Outlook CenterMcPheters is editor of the Arizona Blue Chip Economic Forecast and the Western Blue Chip Economic Forecast newsletters, published monthly by the center..

Health care, finance and food service are very strong industries in Arizona, he said. But one of the biggest drivers in the state’s economy is the 61,000 new residents who come from other states every year.

But the state must keep up with that population growth — which he forecasts will be 120,000 new people from domestic and international locations in 2018 — about a 1.7 percent increase.

“The Arizona Department of Transportation estimates that to meet the needs of population growth, the cost will be $100 billion. But our gas tax is the same as it was 25 years ago,” he said.

Among McPheters’ forecasts for next year:

“That comparison alone suggests job growth has slowed, and that bears watching,” said McPheters, who predicts 61,000 new jobs next year, although unemployment will likely decline tick down slightly to 4.2 percent.

In a strange twist, McPheters found that metro Phoenix added 51,000 new jobs in 2017, while statewide, the number of jobs added for the calendar year will likely be about 47,000. That’s because Tucson is losing jobs.

“That’s not good for the state or the economy,” he said.

Higher wages: McPheters forecasts average hourly wages will increase by about 4.5 percent, to $26.26, up from the $25.13 average of this year.

He noted that Arizona leads the nation in the growth of food-service jobs despite the increase in the minimum wage to $10 an hour in January.

More houses: Arizona’s housing industry continues to recover with a 15 percent increase in the number of single-family home permits forecast. That’s about 32,580 new houses — twice as many as the 16,189 new homes in 2012.

In the Phoenix area, McPheters expects the boom in multifamily construction to cool. He sees a 32 percent decline in permits for apartments, to about 6,883, for next year. 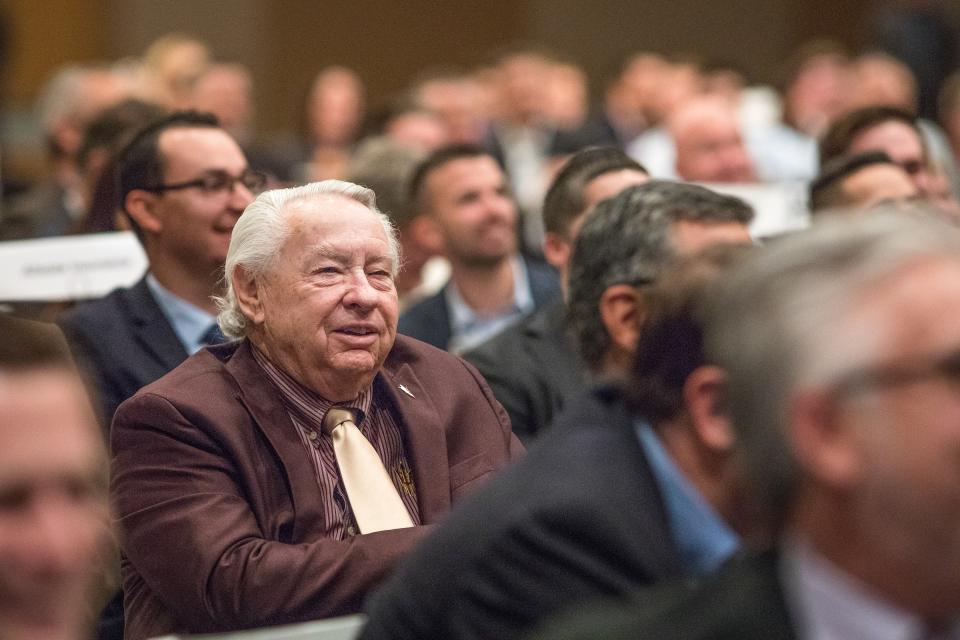 ASU alum Ed Sandidge and nearly 700 others listen at the Economic Forecast Luncheon in downtown Phoenix on Wednesday. Photo by Charlie Leight/ASU Now

McPheters said one area of concern is education.

“When you look at the drivers of business relocation, things have really changed. There was an era when the cost of doing business and the tax structure were always number one and two,” he said.

“In modern times, the answer is invariably quality and availability of labor, and right now Arizona has a somewhat lower proportion of college-educated persons. We’re lower than our competitors, in particular Colorado.

“We need to be sure that within the state we are growing people who can benefit the economy.”

Other speakers at the event were John Williams, president and CEO of the Federal Reserve Bank of San Francisco, and Anthony Chan, Chase’s chief economist.

Williams said that the national economy is in good shape and that the U.S. has essentially reached maximum employment, with an unemployment rate of about 4 percent.

“Even in a very strong economy, there’s always someone who’s not in a job, and the reality is that we’ll never get to zero,” he said.

Williams said the “misery index” is measured as the unemployment rate, about 4 percent, added to the inflation rate, which is now about 1.5 percent, for a misery index of 5.5 percent. He noted that the index was twice as high in 2011 and exceeded 20 percent in 1980.

Chan said that the current recovery is the third longest economic expansion in U.S. history, going back to 1900.

“When you look at economic expansions, the good news is that they don’t die of old age. You need some sort of a catalyst to end it,” he said, such as a housing bubble.

“The bottom line is I don’t see any catalyst, and that’s why I think this economic expansion can go on for two or three more years.”