Karen Watanabe-Sailor, associate professor in the School of Mathematical and Natural Sciences at Arizona State University's West campus, recently received funding from the U.S. Army Corps of Engineers, Engineer Research and Development Center for a three-year project involving the effects of acetylcholine on zebrafish. This project is rooted in pharmacology and could lead to a new treatment for Alzheimer’s disease.

Here, Watanabe-Sailor talks about the study and its possibilities. 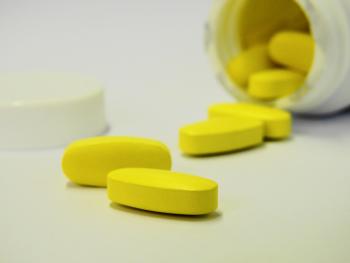 Question: Will ASU students be involved in conducting this research? If so, how? What kind of impact would this research have on their futures?

Answer: I currently have two students who are working on this project for academic research credit, but I would like to find a few more who have an interest in working at the interface of math, biology and computing.

As a mentor, I try to find projects for students that will help them achieve their academic and career goals. With that said, this project could help students interested in getting a job at an environmental consulting company after graduation, for example; students interested in graduate school or a professional school (e.g., in medicine, pharmacy or public health) can strengthen their applications by working on the project and becoming a co-author on a published paper.

Q: How do you hope to put the results of this project to use?

Q: How will this project influence your future work as a scientist? As a professor?

ASU's West campus recently launched a bachelor's degree in pharmacology/toxicology. I anticipate teaching a pharmacology/toxicology class in the near future and will be able to use results from this research as a teaching tool to illustrate how chemicals affect different scales of biological organization from interactions at the molecular level to cells and ultimately the organism.

A fantastic place to hang out for 5,000 years

Out on the far northwestern edge of the Valley, where the pavement turns to sand, is a place people have been visiting for 5,000 years.Fifty centuries ago visitors chiseled images into rocks stained with desert varnish: ladders, centipedes, figures with big crazy hands, abstract geometric designs, a pair of deer standing nose to nose — in all, 1,571 petroglyphs on 579 boulders.Now, instead of yu... 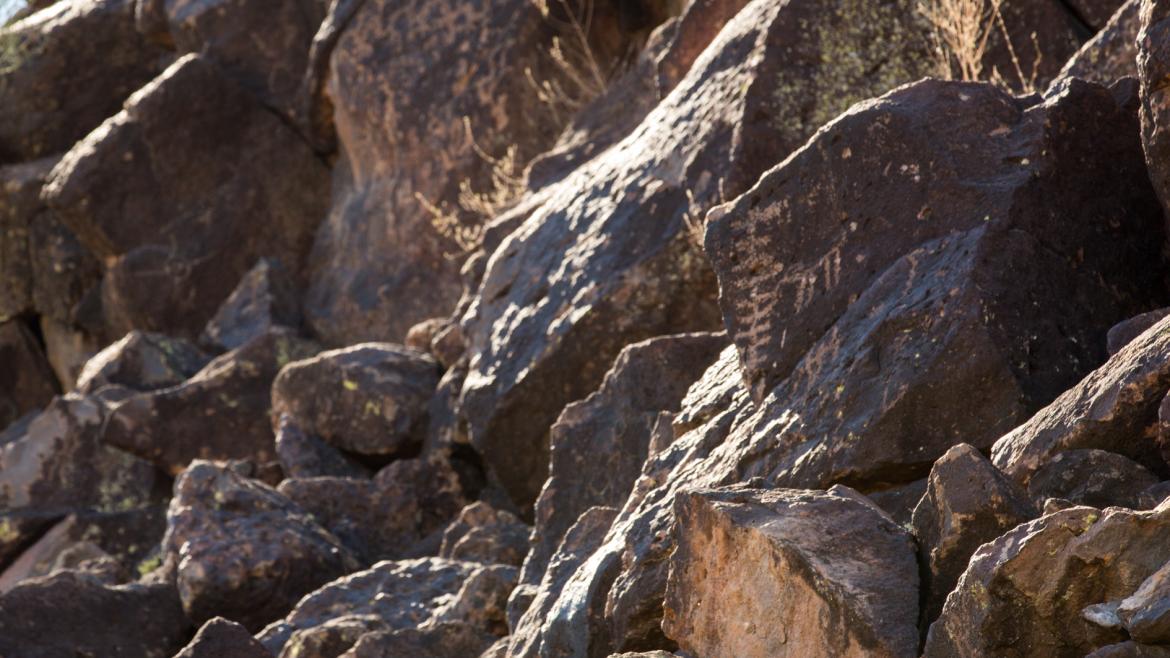 A fantastic place to hang out for 5,000 years

Renovated Deer Valley Petroglyph Preserve, administered by ASU, offers modern visitors a glimpse into the ancient past and its people

Out on the far northwestern edge of the Valley, where the pavement turns to sand, is a place people have been visiting for 5,000 years.

Now, instead of yucca sandals and turkey-feather kilts, visitors wear rubber flip-flops and yoga pants, but they still come for the same reason: “It’s been a fantastic place to hang out for 5,000 years,” said Arizona State University archaeologist Emily Fioccoprile.

It’s the Deer Valley Petroglyph Preserve, owned and administered by ASU’s School of Human Evolution and Social Change, and it recently reopened after a long renovation.

“We’re really here to preserve and interpret the site at the same time, and make those connections between the past and the present,” said assistant director Karen Lloyd D’Onofrio. “When we get here first thing in the morning and the Gambel quail are running around because it’s so quiet and you see the birds and the hawks before we disturb their peace, it’s just very calming. It’s a great way to learn more about the history of the Valley and realize we’re connected in multiple ways.”

Three cultures chipped petroglyphs into the boulders at the 47-acre site: the Archaic, the Hohokam and the Patayan. The “5,000 years” number is a ballpark figure; it could be more or less than that.

To put that in some sort of perspective, it helps to take a look around the world at what else was going on then. The first Egyptian kings to rule over a unified country assumed power. Stonehenge was under construction. On some small Alaskan islands mammoths still lived. Yoga was invented. Wheels were in use on carts in Europe. Writing appeared.

At least some people lived at the Deer Valley site in the Hohokam period. There was at least one pithouse. It was a seasonal place to live; Skunk Creek didn’t flow year-round. Residents worked; there’s evidence of stone tools and pottery.

“We don’t know why the Hohokam stopped here,” Lloyd D’Onofrio said. “We can only speculate. ... It may have been a quarry of some type or a place where people stopped over for a few days on the way to somewhere else.”

About 30,000 to 40,000 people lived in the Valley roughly 25 miles south — about the distance people who walked everywhere could cover in a day.

“I would think it would be a good day’s walk,” Lloyd D’Onofrio said. 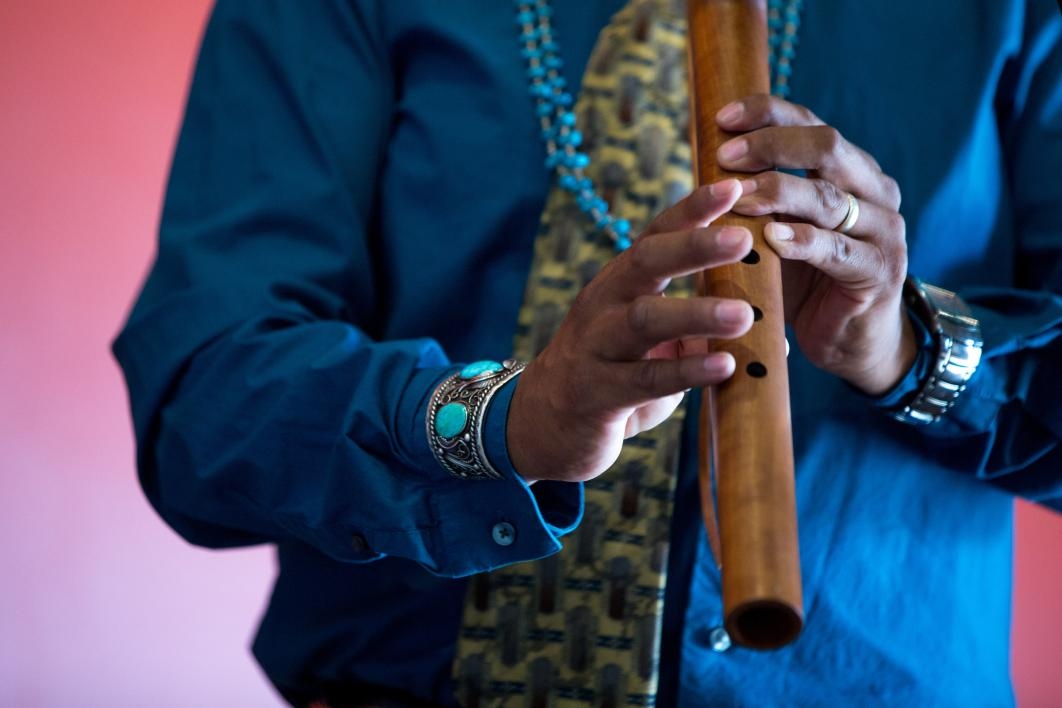 Jonah Littlesunday performs on the Native American flute inside the Deer Valley Petroglyph Preserve Museum on Nov. 18. Littlesunday has performed with Canyon Records for the past two years, and the company is currently the featured exhibit in the petroglyph preserve's museum. 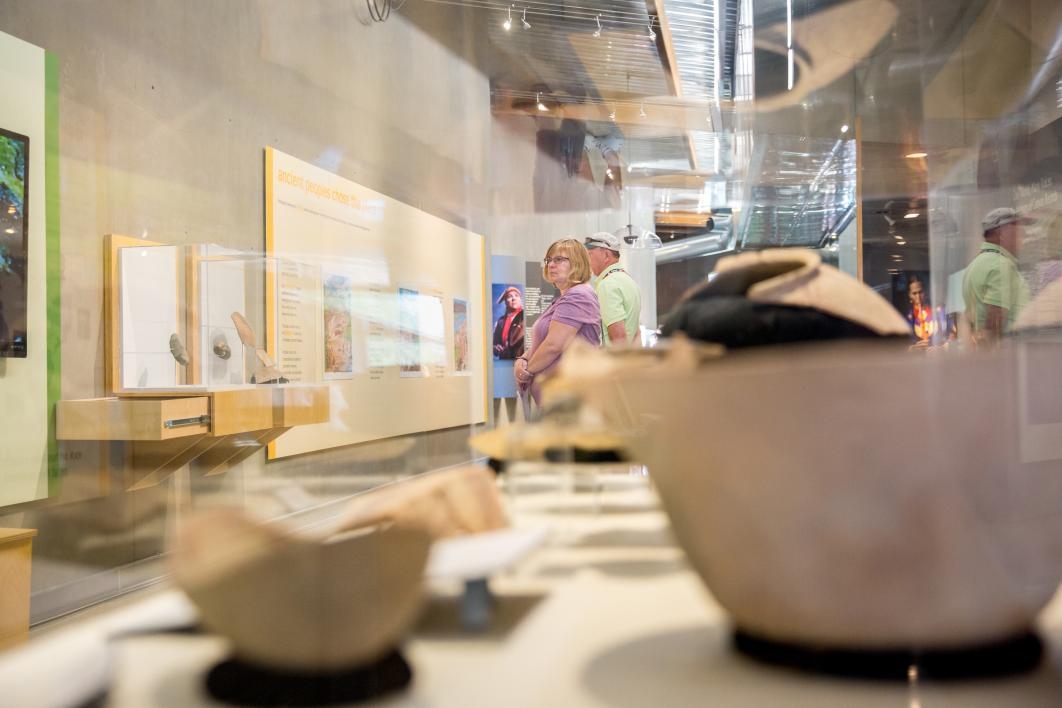 Visitors explore the Deer Valley Petroglyph Preserve's museum, which features other historic artifacts found along with the petroglyphs, such as ceramic bowls and stone knives. 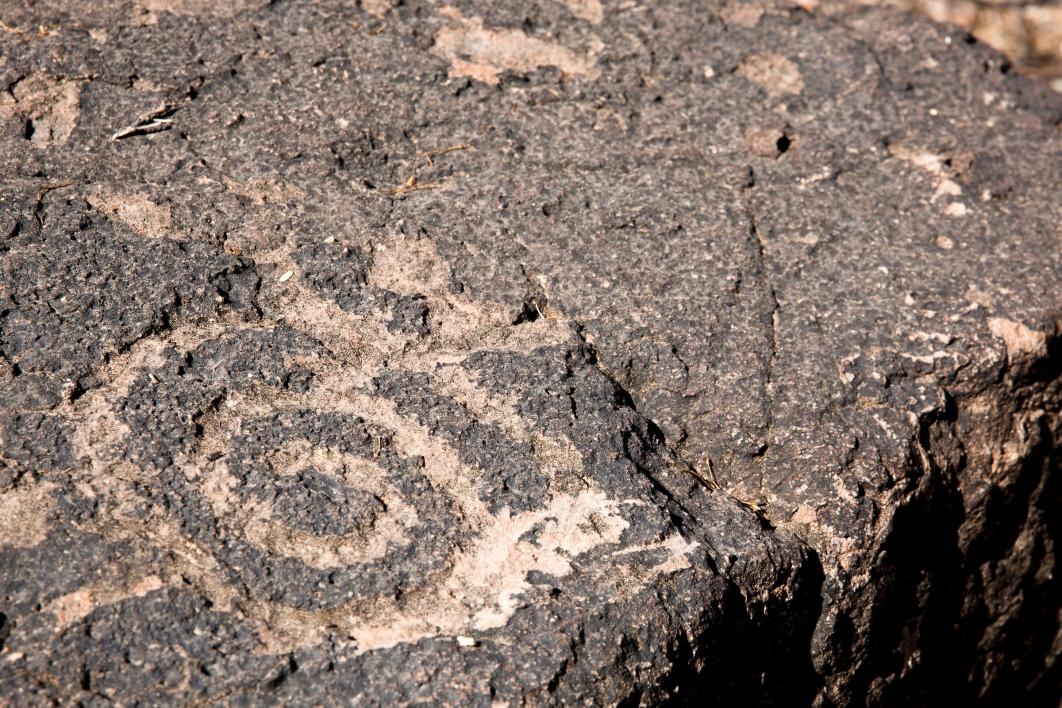 A spiral is etched into one of the rocks on the Deer Valley Petroglyph Preserve, one of 1,571 petroglyphs on 579 boulders. Although the petroglyphs are usually visible, they are clearer in early morning and late afternoon light, when they are partially shaded. 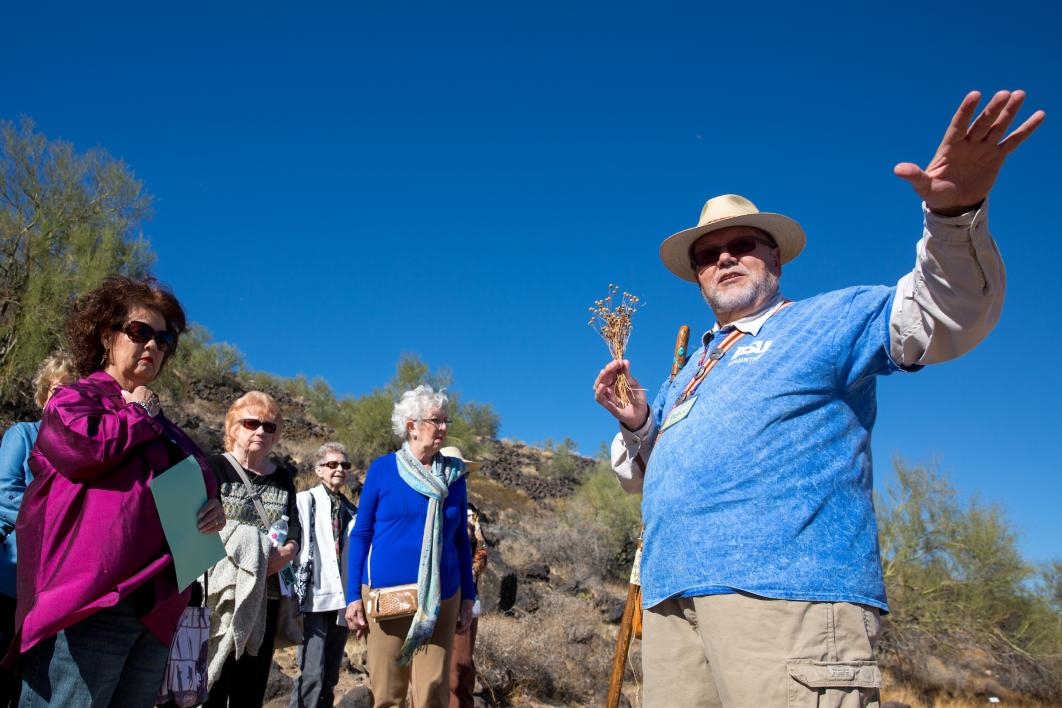 Peter Huegel (right), a volunteer tour guide, explains to a tour group that the plant he is holding, globe chamomile, is not native to Arizona. Even though globe chamomile now covers the fields surrounding the petroglyph preserve, it is actually an invasive plant species brought from South Africa. 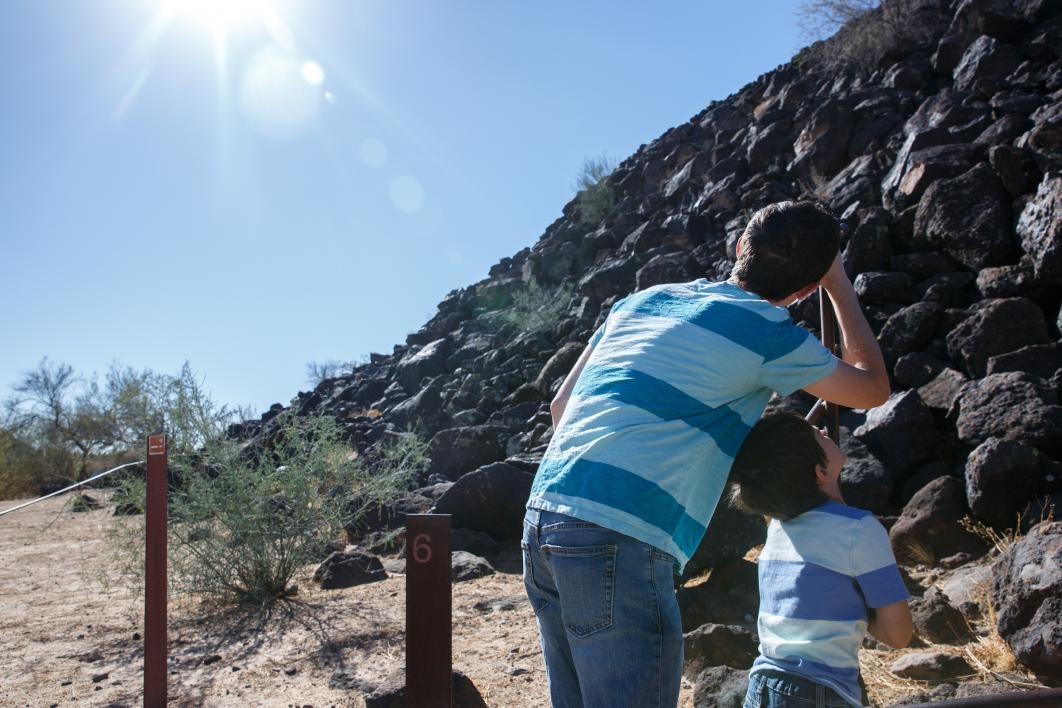 Parker Ginos, 6, and his father, Derek, look though small metal spyglasses at petroglyphs on the hill. The metal cylinders point the viewer's eye toward a specific petroglyph. 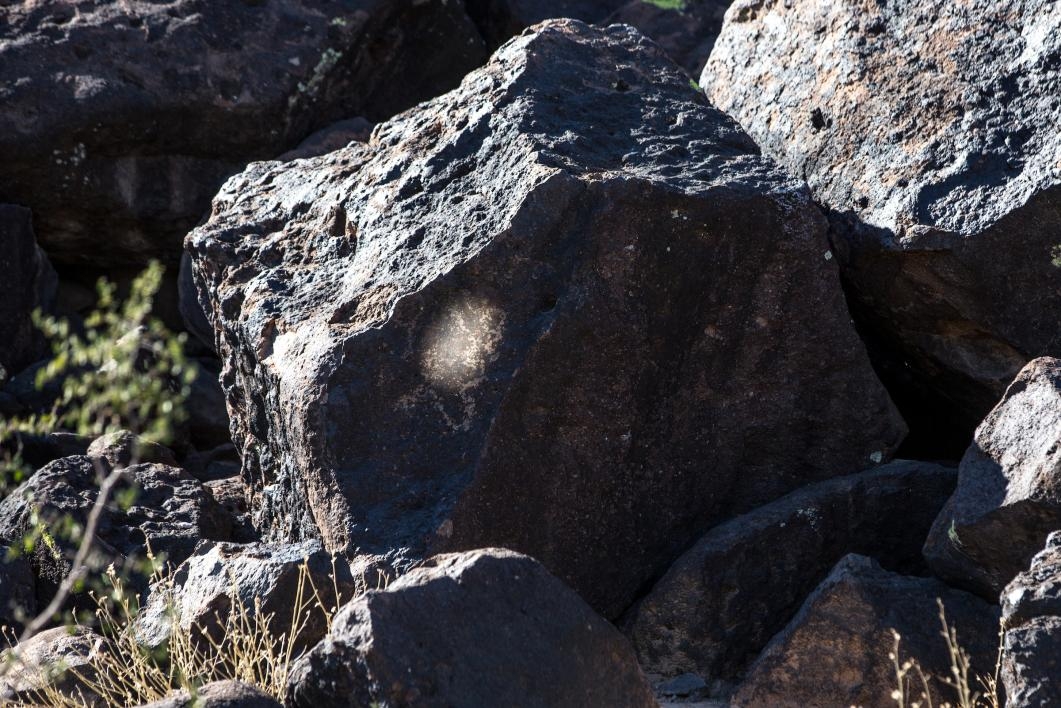 A tour guide at the Deer Valley Petroglyph Preserve uses a mirror to shine a light on a piece of rock, illuminating petroglyphs that are hidden in shadow. 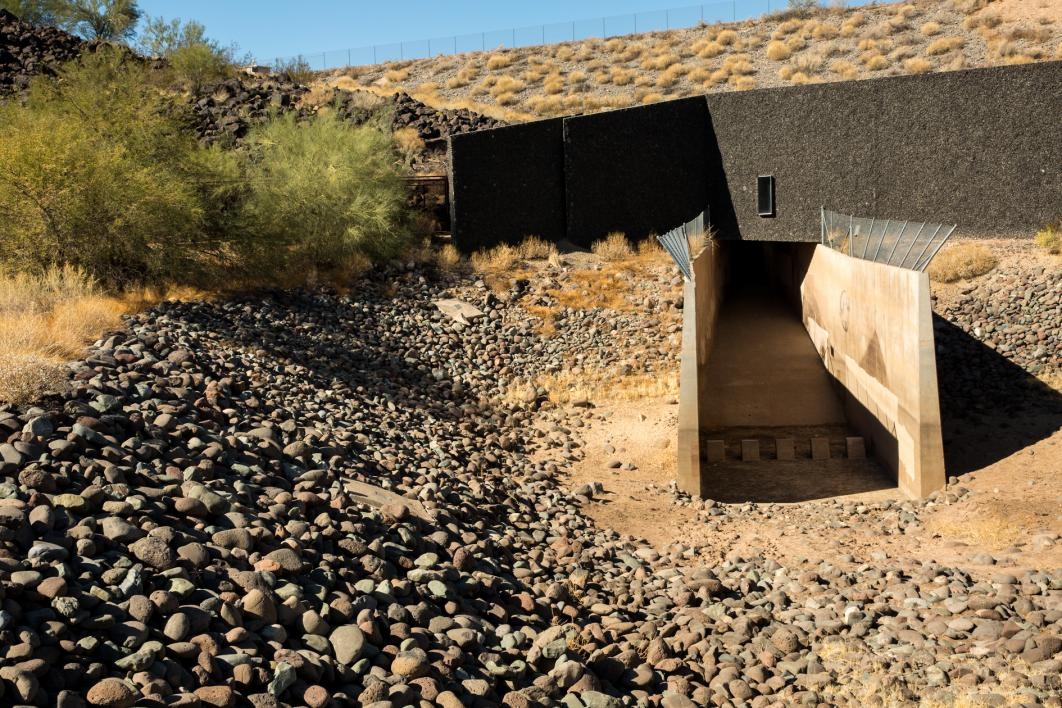 The exterior of the Will Bruder-designed museum at the Deer Valley Petroglyph Preserve.

The biggest image is about 3 feet tall. The inspiration for the preserve’s logo, the two deer nose to nose, are dubbed the kissing deer. The question on the tip of everyone’s tongue when petroglyphs are viewed is, “What do they mean?” They are so ancient that interpretation is impossible, said Fioccoprile, a postdoctoral research associate with the Center for Archaeology and Society.

“We know it’s part of a suite of symbols people would have recognized,” she said.

Petroglyphs are an investment in the landscape. You don’t just wander up and scratch something in. You have to climb high. Most of the petroglyphs are not at ground level where you see them. And they’re not easy to create. Desert varnish doesn’t yield as easily as sandstone.

“We know that people are making a choice,” Fioccoprile said. “I don’t feel I know what they mean, personally. ... That’s not for us as archaeologists to interpret. There are many Native descendent communities who have stories about what these landscapes meant to their ancestors. ...

“We have to look at what they mean as a collection. ... We know this place was special to many, many people over generations; otherwise, they wouldn’t have come back.”

Fioccoprile is doing a one-year project looking at the landscapes of the preserve and thinking about why it would have been connected to the wider Phoenix basin through time, from when the first people arrived on the site to now.

“How people’s connections to the landscape have stayed the same, and how they’ve changed through time,” she said. “Making petroglyphs was a major draw for people to come in, and we know this happened from the Archaic period — so very, very ancient — all the way up until the historic period,” Fioccoprile said. “It seems this is a landscape of multiple uses. ... I would say that Deer Valley definitely is still alive. ... By visiting we do create the next chapter.”

What: An archaeology museum and 47-acre Sonoran Desert preserve, and home to the largest concentration of Native American petroglyphs in the Phoenix area.

Admission: $3–$7; free for ASU students and children younger than 6. Every third Saturday of the month is free admission for all.