ASU’s Down syndrome class is working out

Top 40 hits blast from the speakers as Haley Santiago and Larry Merville pass a basketball back and forth across the wooden floor of a basement workout room at the Lincoln Family YMCA on ASU’s Downtown Phoenix campus.

They finish the set and Santiago asks, “How’d that feel?”

Off in a corner, Trevor Weinstock kneels at the feet of Marcus SanTellan, holding his red and black adidas sneakers against the floor as SanTellan lifts his torso up toward his legs, then lowers it back down to the ground.

“C’mon Marcus, you got this,” Weinstock tells him.

On the surface, this scene seems like any other afternoon at the Y — except that Santiago and Weinstock are College of Health Solutions students at Arizona State University and Merville and SanTellan have Down syndrome.

The class is part of ASU Clinical Assistant Professor Simon Holzapfel’s Exercise Program for Adults with Down Syndrome, or ExDS for short.

Holzapfel said he created the free program, which officially launched in August, because there was a need among the Down syndrome community.

“Adults with Down syndrome are usually very inactive, and on average they don’t engage in enough physical activity compared to what is recommended … and they’re also at a very high risk for dementia and Alzheimer’s disease as they age,” he said. “So through physical activity, we hope to at least delay some of those age-related declines.”

Holzapfel’s interest in working with special populations was sparked when he volunteered for a program called Kentucky Adaptive Physical Education while working on his master’s degree. Once a week, he would provide a physical activity program for people with varying types of disabilities.

Soon after, he heard about the work of ASU Associate Professor Shannon Ringenbach, who was conducting research on the effects of exercise on cognitive function in people with Down syndrome. Holzapfel made the decision to come to ASU to for his PhD and joined Ringenbach’s research team.

During that time, as he got to know members of the Down syndrome community, he realized there weren’t many effective exercise opportunities for them.

“I wanted to offer something more permanent, appropriate and purposeful,” Holzapfel said.

He thinks of ExDS as killing not two, but three birds with one stone: community engagement, hands-on learning and research opportunities.

“We’re doing the community exercise program to benefit our members in the community with Down syndrome, students are benefiting due to the didactic class aspect of it, and then there’s the research aspect of it, which will hopefully show other people through publications in the future that this kind of program can work and can be effective,” he said. 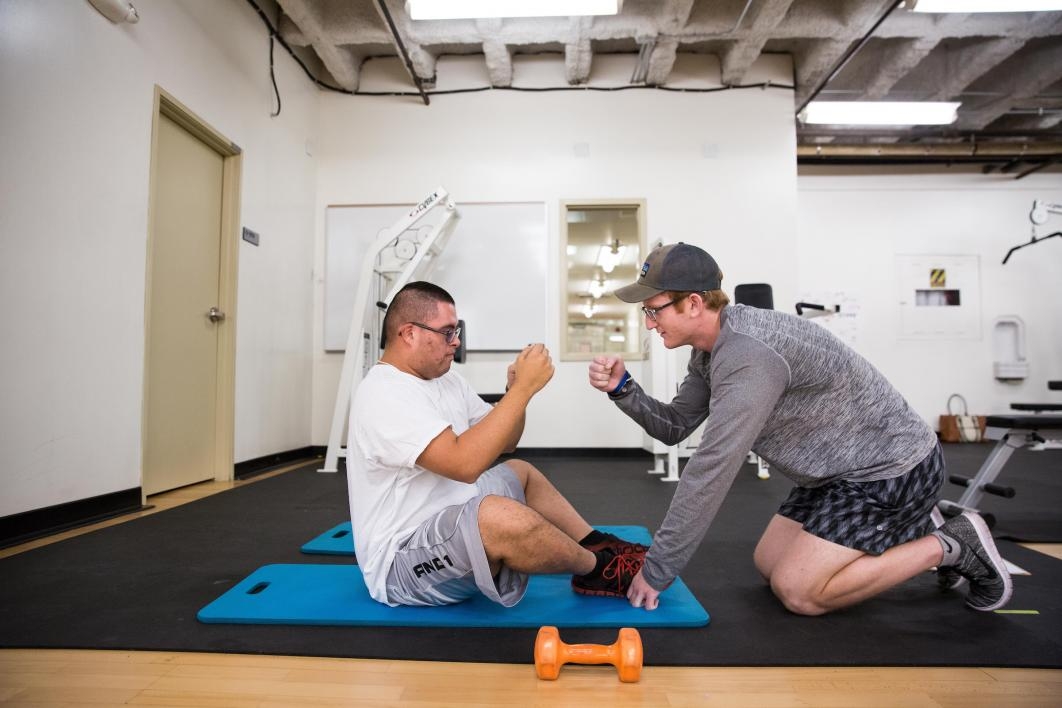 Jessica Muhlenkamp (right) passes the ball back to biomedical sciences junior Ann Shikles during her workout. 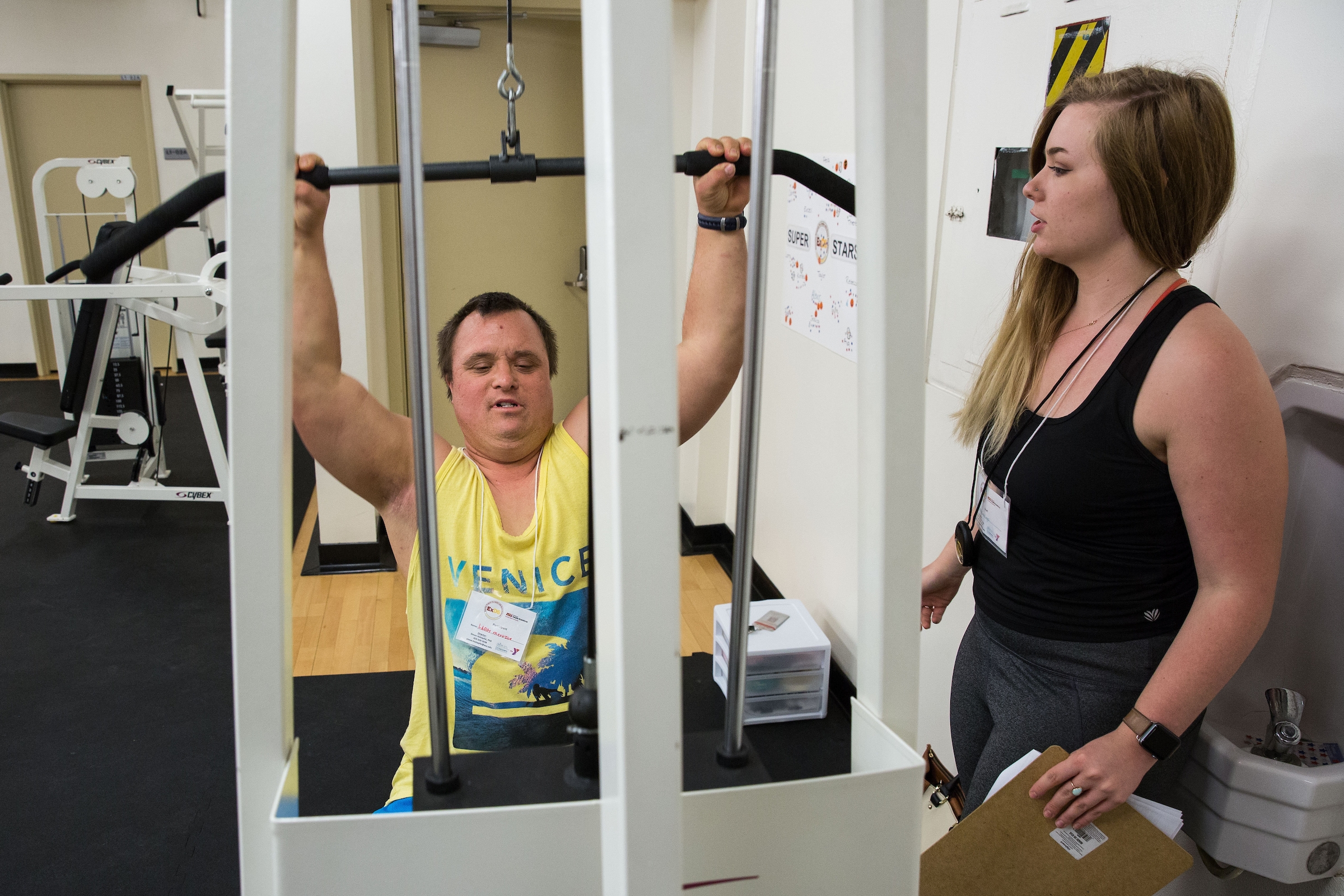 Aside from the physical benefits the program provides, there are social benefits for both the participants and the ASU students. They are paired up based on their schedules, and after getting to know each other, the students tailor the participants’ workout routines to their individual interests and preferences.

“That social interaction is very important for emotional health and well-being, and it kind of gets those adults with Down syndrome out into the community,” Holzapfel said.

Karl Truscott, Merville’s stepfather, said the program helps him to be more independent.

A former Special Olympics athlete, Merville is growing in confidence, now living with his sister and working as a dishwasher at the Pointe Hilton to help her with rent. His favorite sport is basketball, so his exercise partner Santiago tries to incorporate the sport into their exercise routines, which they perform together.

“I customize a program especially for [my participants], but I like to change it up, too,” Santiago said. “As long as they’re having fun and they’re exercising.”

Holzapfel plans to keep the program going indefinitely, offering it every semester for the foreseeable future. He also wants to expand it to include a nutritional aspect, helping participants with diet and weight-loss goals while also incorporating students from ASU’s nutrition program.

Overall, he wants to make a difference for an underserved population.

“I hope to make a little dent in terms of making society more inclusive of people with disabilities, and shaping students into more-inclusive fitness professionals when they go out and start working,” he said.

Everyone needs to do their part to conserve water. But what if entire communities could work together to eliminate the unnecessary waste of this valuable resource?That’s the idea behind Green Planet Framework/Aquifier Systems, founded by Joshua Pardhe. The system allows users to compare the total volume of water delivered from a municipal source to the amount actually used in a home or other bu...

Water-saving solutions, home health tests were some of the ideas pitched at ASU-hosted event

Everyone needs to do their part to conserve water. But what if entire communities could work together to eliminate the unnecessary waste of this valuable resource?

That’s the idea behind Green Planet Framework/Aquifier Systems, founded by Joshua Pardhe. The system allows users to compare the total volume of water delivered from a municipal source to the amount actually used in a home or other building. With this data, homeowners and property managers can identify water leaks and make critical repairs. 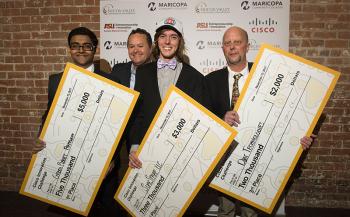 On Nov. 15, Pardhe was awarded first place at the Cisco Innovation Challenge and a prize of $5,000 to help launch his company. The Cisco Innovation Challenge is a live pitch competition where students can win seed funding to start, grow or launch their ventures. It is supported by grant funding from the Cisco corporate advised fund at Silicon Valley Community Foundation and hosted by Arizona State University’s Entrepreneurship and Innovation (E+I) in partnership with Maricopa Community Colleges.

Pardhe is currently completing high school and is dually-enrolled in his fifth semester at Glendale Community College. He’s an up-and-coming entrepreneur. And he’s just 15 years old.

“I was really excited to win!” Pardhe said. “With the immense problem of utility wastage that faces us today, we really need a large-scale solution to this problem. Did you know that Americans alone waste up to 1 trillion gallons of water a year?”

Next May, after graduating from high school, Pardhe plans to attend ASU with a double major in computer systems engineering and business administration. He will also continue his work with Green Planet/Aquifier Systems by completing additional research, obtaining necessary patents and creating prototypes for potential investors.

“The seed funding I received from the Cisco Innovation Challenge will help me to bring my community-based ecological change platform to market, allowing us to prevent wastage of our resources together and put them to use where they are most needed,” he said.

The Cisco Innovation Challenge is open to Maricopa Community College students from all majors and fields of study. The competition allows selected participants to pitch ideas for new internet of things solutions and technologies.

It can also be a culminating event for students in Poder, a five-week social entrepreneurship program offered at no cost to Maricopa Community College students by E+I who are selected to participate. Poder helps students develop a business concept and encourages them to consider how technology allows them to maximize their positive impact on the world.

“ASU is pleased and proud to partner with the Maricopa Community Colleges, Silicon Valley Community Foundation, and Cisco to present the Cisco Innovation Challenge to the community twice a year, and not only reward the student presenters, but also bring to life to a wider audience the importance of digitization and the power of entrepreneurship,” said Ji Mi Choi, associate vice president of ASU’s Office of Knowledge Enterprise Development. “As a university that values entrepreneurship, ASU’s Entrepreneurship and Innovation team endeavors to support students, faculty and the community in their development as entrepreneurs as well as the development of their ventures as drivers of economic and social change.” 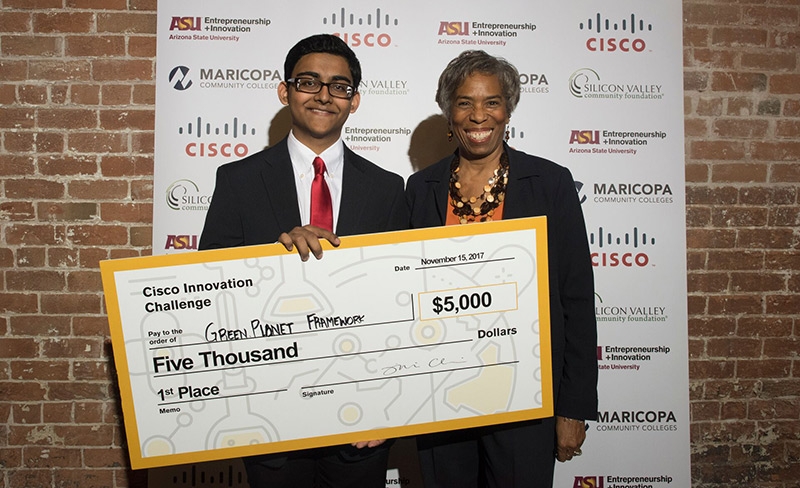 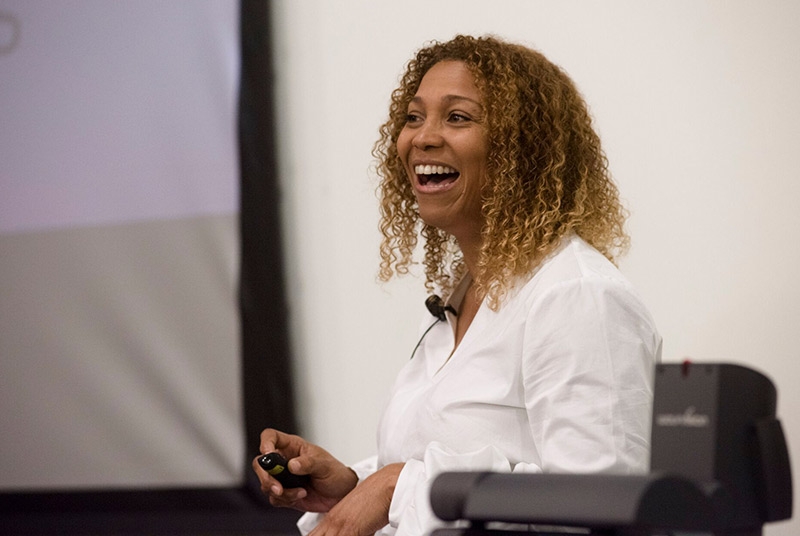 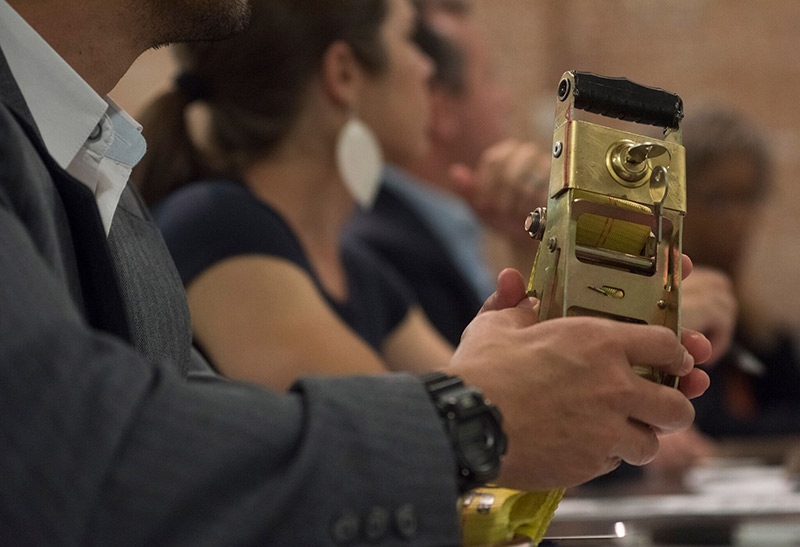 Prototype of the SureStrap by Cisco Challenge second-place winner Cody Constanbader. The SureStrap allows users to secure vehicles and cargo with a manual lock and a smartphone app.

The fall 2017 contestants presented companies in a diverse range of industries, including medical devices, sustainability solutions, enabling applications and consumer products. Second-place winner, Cody Constanbader from Paradise Valley Community College (PVCC) shared his idea for SureStrap, a locking tie-down strap that can prevent the theft of vehicles and valuable cargo.

In third place was Todd Hoffman, also from PVCC. He pitched Ddot Technologies, which provides accurate blood testing systems that patients can use from home, then download the results to their doctor’s offices.

Tracy Lea, the evening’s master of ceremony and assistant director of venture development at E+I, praised all the contestants for their innovative solutions and perseverance. She also provided sage advice to aspiring entrepreneurs.

“Keep on with your idea, even if you don’t succeed at first,” she said. “Failure can be the first step to where you want to go.”

The following finalists also presented at the Cisco Innovation Challenge:

Siavash Sabet, Paradise Valley Community College
Get-up: A device that reminds desk workers to stand and be active during the day