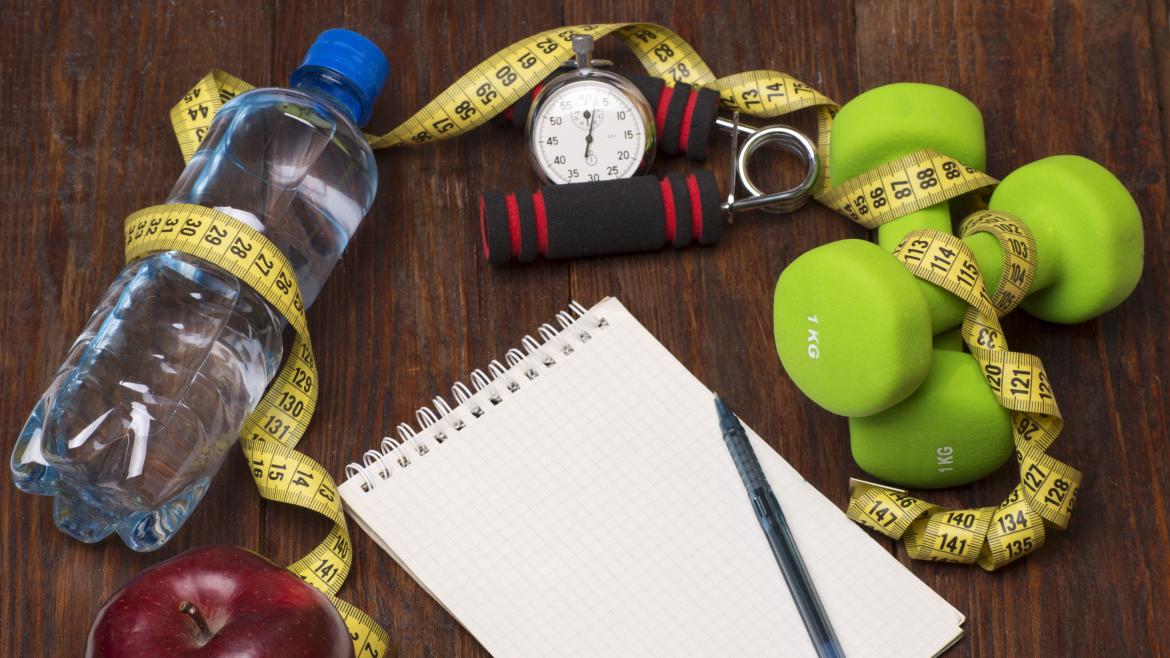 This November, in recognition of National Diabetes Month, there are dozens of Arizona families who can say they are not only more aware of the disease but actively working to combat it thanks to researchers at Arizona State University's College of Nursing and Health Innovation.

A two-year research project titled "¡Viva Maryvale!" focused on developing a sustainable diabetes prevention program for high-risk communities. After the data was collected and analyzed, the results are encouraging.

The study was conducted by researchers from the College of Nursing and Health Innovation’s Center for Health Promotion and Disease Prevention, under Gabriel Shaibi, principal investigator and center director. The researchers also partnered with several local agencies in order to successfully carry out the project.

“Our goal was to test the acceptability, feasibility and efficacy of a family-focused diabetes prevention program for Latino families,” said Erica Soltero, a postdoctoral fellow with the center.

On the efficacy side, they saw a modest decrease in risk factors for diabetes but a significant decrease in body fat percentage for adults. Additionally, they saw quality of life improve quite a bit.

For youth, they saw body fat decrease and a significant increase in quality of life.

A total of 58 families living in the Maryvale community of Phoenix enrolled in "Viva" during the two-year period.

The geographical study area was selected for a number of reasons.

The community of 215,000 residents is predominately Hispanic (76 percent), according to information from the Arizona Department of Health Services.

Soltero says research shows Latinos are significantly more insulin-resistant and exhibit higher rates of prediabetes and diabetes. In addition, the Centers for Disease Control estimates up to 50 percent of Latino children will develop type 2 diabetes in their lifetime.

Those statistics coupled with Maryvale’s own data showed that diabetes prevention interventions were definitely needed.

They identified participants by partnering with Mountain Park Health Center’s Maryvale clinic, just one of several community-based organizations involved in the project.

Soltero says they were looking for children between the ages of 8 and 12 who were obese but who had not yet been diagnosed with type 2 diabetes.

Thanks to Mountain Park, they were able to connect with both children and parents who were at high-risk.

“They have just really championed this project,” Soletro said. Researchers were able to work closely with the doctors, promotorasA promotora is a lay Hispanic/Latino community member who receives specialized training to provide basic health education in the community without being a professional health care worker. and the integrative health department at Mountain Park.

Once children were identified by their doctors as possible candidates, they were invited to participate; their parents were asked to join the program, too. In order for a child to be involved, a parent had to sign up with them.

That’s exactly how one mom found out about "Viva" — her 12-year-old son Esteban’s doctor recommended the study. Communicating through a translator, she agreed to share their experience but because of privacy agreements related to the study can only be identified as Esteban’s mom.

“My son turned out to be overweight and prediabetic with cholesterol; I have also had high cholesterol,” she said, adding, “I do whatever needs to be done to improve the health of my son.”

"Viva" was no walk in the park. Each family has to commit to the 12-week program, which included exercising and attending nutrition education and overall wellness classes.

Participants were required to exercise three times a week for an hour each. Thanks to a partnership with Valley of the Sun YMCA they were able to work out close to home at the Maryvale branch.

“It’s colorful, bilingual and the staff reflects the community; they lend their expertise in fitness instruction,” Soltero said. “Each class is led by a YMCA facilitator.”

For Esteban and his mom, going to a gym was a new and at first intimidating experience. She said initially they were shy and the activities were really tiring, but she refused to quit because she wanted to set a good example.

“I would tell him I was not tired because I did not want him to think that if I could not do it, he couldn’t either. I would continue on as if nothing hurt me, even if I was tired,” she said.

The nutrition education classes were led by registered dietitians and health educators from St. Vincent de Paul’s Family Wellness Program, another integral partner in this study.

“They have developed a wonderful curriculum that incorporates not only nutrition education, everything from carbs and fats but also some wellness components that talk about self-esteem,” Soltero said.

The Arizona Department of Health Services was the primary funder of "Viva," but Soltero says they did so much more. They were actively involved every step of the way, helping with the vision of the program and offering guidance for implementation.

Esteban’s mom said she lost 22 pounds while participating in "Viva" and her son brought his risk down and is no longer pre-diabetic.

Now that the study is over, she says they are maintaining their new healthy lifestyle in the food choices they make, how they prepare meals and also by staying active.

“He has not gained weight, and we continue to go to the gym the three days of the week that we used to,” she said.

Soltero said based on the data they’ve gathered, the program also passed the acceptability and feasibility test, thanks in part to the fact that it was a culturally grounded program developed with Latino family values in mind.

A key component of the positive outcomes had a lot to do with the community partners.

“We were able to do more together than any one entity could do on its own, and that’s the power of 'Viva,' ” said Soltero.

Given the initial findings, Soltero says they would like to continue "Viva," with a larger number of participants, which would require additional funding.

Last month, Soltero along with her research study colleagues presented their data to the Arizona Department of Health Services, opening the door to discuss future funding.

Long term, the goal is sustainability outside of grants, which could include working with policymakers to institutionalize "Viva" and looking into making it a billable service through insurance.

For Soltero, there was one thing that came to light during the course of this two-year study that really stuck with her about the importance of what they were doing.

“The fact that they were either prediabetic or type 2 and didn't know it, I think that struck me because the first question that pops in my mind is, when were they going to find out and would it have been too late, or what would have happened?” she said. “This study really helped them bring it to light.”

At a cinema in the not-too-distant future …The deputy defense minister sprints down a street in Vienna. His smart watch contains missile blueprints.Ethan Hunt rappels from a building, tackling the minister and slipping the watch from his wrist. Hunt inserts a contact lens printed with a high-res photo of the minister’s eye and holds the watch to his face.No luck. It really is a mission impossi... 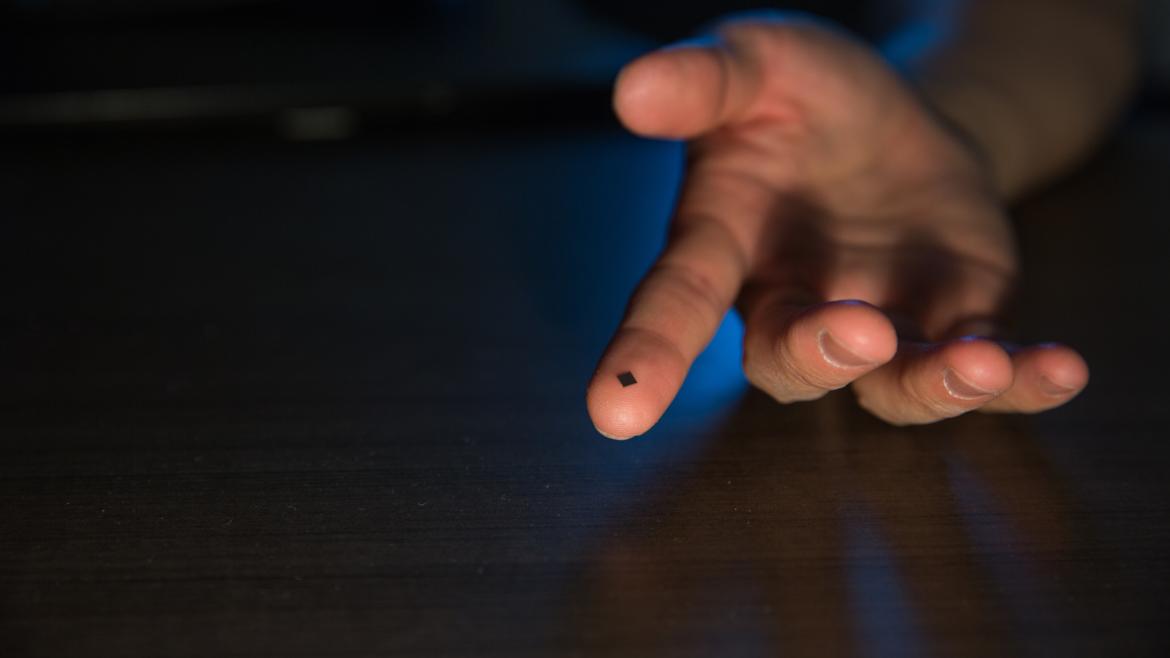 At a cinema in the not-too-distant future …

The deputy defense minister sprints down a street in Vienna. His smart watch contains missile blueprints.

Ethan Hunt rappels from a building, tackling the minister and slipping the watch from his wrist. Hunt inserts a contact lens printed with a high-res photo of the minister’s eye and holds the watch to his face.

No luck. It really is a mission impossible. The watch’s data is protected by authentication tied to the minister’s heartbeat. Hunt can’t fake that. He’s been thwarted by Arizona State University researcher Jae-sun Seo’s biometric security measures.

Seo, an assistant professor in the School of Electrical, Computer and Energy Engineering, was the lead on a pair of studies that developed security authentication based on electrical activity of heartbeats, or electrocardiogram readings.

While few of us have intercontinental ballistic missile blueprints on our Fitbits, they do contain medical information. Sensors pick up your electrocardiogram and other signals. That’s private medical data.

Your medical information is worth 10 times what your credit card is on the black market, according to the FBI. More data breaches happen in the medical and health-care industry now than in other sector, including financial, education and government, according to the nonprofit Identity Theft Resource Center. Health-insurance information can be used to purchase drugs or medical equipment, which are then resold illegally, or even to get medical care.

Tech companies are constantly stepping up security measures. Besides passwords, fingerprints, retinal scans and facial-recognition software are popping up in the latest gadgets.

“Still there is some vulnerability,” Seo said. “Fingerprints can be hacked. Iris, sometimes if you have a high-resolution photo it can be unlocked. ... In that sense multi-factor authentication becomes really necessary. To that extent we have been working on a different biometric modality, namely our physiological signals such as (electrocardiogram).”

The tech — a chip — developed by Seo and his colleagues stresses the individuality of electrical heartbeat signals. 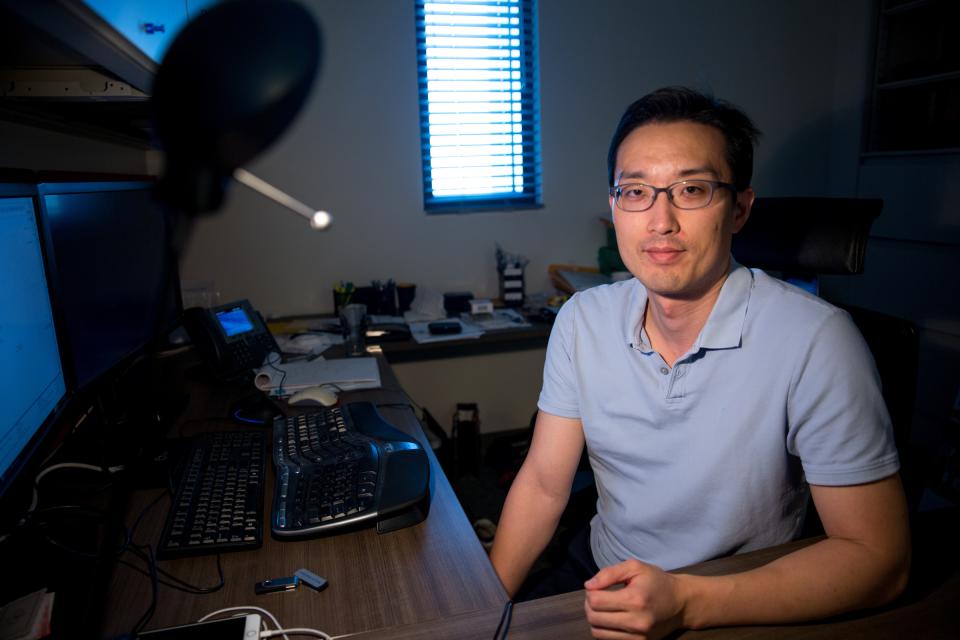 ASU Assistant Professor Jae-sun Seo, an ASU professor of electrical (in his office on the Tempe campus) is researching how biometric security devices can be used to protect wearable technology. Photo by Anya Magnuson/ASU Now

“What we are proposing is that we can actually perform user authentication with our own (electrocardiogram) signals, and we can actually generate random secret keys using our own signals as well,” Seo said. “What that means is that although signals might look very similar from person to person, they are actually different. ... If you look at them visually, they don’t look that different. That’s where our technology comes in. We perform sophisticated filtering, signal processing and employ relatively simple neural networks to extract features, which are maximally different between different individuals.”

How would it work? One of Seo’s sensors on the back of the watch might touch your skin and pick up your physiological signals.

“It could continuously authenticate and make sure the owner is wearing the device instead of an adversary who stole the device and is trying to do something with it,” he said.

Another advantage is that it’s nonintrusive. No typing a password 10 digits long or rubbing your sweaty thumb on the screen or posing your face in an unnatural fashion.

Although the core technology is still in the research phase, Seo said it could be integrated into other tech, like phones or security systems.

“We have developed prototype chips and demonstrated real-time (electrocardiogram) authentication with very low power, which enables seamless integration into wearable devices,” he said. “Getting into a product will mean much more validation and verification of quality assessment. There’s still a way to go, but we verified our custom prototype chip with a fairly large database of more than 600 people.”

Shihui Yin was the student lead on both papers. The work was in collaboration with Samsung Advanced Institute of Technology in Korea.

Top photo: Professor Jae-sun Seo holds an ECG authentication chip in his hands. Seo hopes to use chips like this in wearable devices such as Apple watches to create biometric security measures based on electrical activity of heartbeats. Photo by Anya Magnuson/ASU Now