Back from the brink: How small donations helped save a species from extinction

A year after launching a PitchFunder campaign to save a tropical frog species, an ASU scientist is making strides

While stationed with the U.S. Army School of the Americas in the Panama Canal Zone during the 1970s, entomology expedition leader Albert Thurman would listen to the chorus of frogs in the streams at night.

The tropics of Central and South America were once lush with at least 110 species of colorful harlequin frogs, but nearly two-thirds of the known populations were wiped out by a deadly fungal disorder called chytridiomycosis, also known as chytid, in the '80s and '90s.

“The frogs are gone,” Thurman said. “There are no more songs at night.”

The Talamancan harlequin frog, Atelopus varius, was thought to have gone extinct along with other species until a tiny population was rediscovered in Costa Rica when a local child walked into a biology field station with one in his hand. That was more than five years ago. Even though the species was found, it is still on the road to recovery.

Conservation and wildlife biologist Jan Schipper, the field conservation research director at the Arizona Center for Nature Conservation/Phoenix Zoo and adjunct faculty in the School of Life Sciences at Arizona State University, led an online PitchFunder campaign to save the Atelopus varius last year.

“The ethics of saving a species is a new one for humanity,” Schipper said. “We have a moral imperative to not let any species go extinct due to our reckless nature and heavy footprint on Earth, but we are also finding the value of the species is far more than just intrinsic.”

The Atelopus varius is a flagship species for drinkable water because it relies heavily on an ecosystem with clean water, natural flow patterns and predictable seasons. However, contaminants are increasing in the area from “poison” fishing and people living upstream, Schipper said.

Thurman, a research associate with the Frank F. Hasbrouck Insect Collection at ASU, was one of several donors who contributed to the School of Life Sciences’ PitchFunder campaign. Since 2001, he has been taking small groups of entomologists and ornithologists on trips to Panama.

Over the last 10 to 15 years, he has noticed the Talamancan harlequin frogs have been absent from the streams where they were once plentiful. He said that’s why he wanted to help the researchers in their efforts to save the species.

“I haven’t seen the frogs in years,” Thurman said. “Somebody has to do research and figure out how to stop them from going extinct because they’re a good part of the ecosystem. We can’t afford to lose all the frogs.”

Back in the 1970s, Thurman also saw Atelopus zeteki, the Panamanian golden frog, in El Valle de Antón, Panama. Local children would sell the frogs at the Sunday market in paper bags for 50 to 75 cents, he said. The frogs weren’t protected at the time. The unabated collection and selling of these amphibians drastically reduced the population before the chytrid fungal disorder hit, wiping out the populations of these frogs.

“I would buy as many of the frogs as I could and drive way back into the mountains to release them in the hopes the kids wouldn't find them,” said Thurman. “I don't think it worked as well as I hoped.”

Schipper and his team of local and international researchers and students used the funds from the PitchFunder campaign to implement a biosecurity protocol for the small population of this critically endangered frog in the Talamanca Mountains of Costa Rica. They facilitated a decontamination process to ensure no other strains of the fungus could contaminate the frogs’ habitat. The team also installed barrier fences to enclose breeding frogs and protect them from invasive trout predation.

The PitchFunder campaign funds also helped support the team’s initiative to further research on this amphibian. They increased testing for the presence of fungus on the frogs and the degree of infection. The team also gathered a significant amount of data on individual frogs.

“We managed to use all the funds from the campaign, which not only had a huge stand-alone value but has also helped us leverage other funds,” Schipper said. “We combined funds from ASU, the Phoenix Zoo, Disney and some private donations to pull off the most successful field season with Atelopus varius to date.”

The frogs began their breeding season in October and November of last year. Schipper said the crew found tadpoles, which means the harlequin frogs are still breeding and the measures to avoid animal extinction played a significant role.

“The continued existence of the species is testimony to the philanthropic support we have received,” he said. “We had the first visual evidence of tadpoles in this population ever — so they’re reproducing — and this might be the first year we haven’t had net negative population growth, which is amazing. It’s incredible to see that the combination of smaller donations was able to make such a difference.”

With the news of tadpoles, Schipper and his team are creating an entire recovery strategy for the species. During the next 12 months, a massive transition will occur to ensure a breeding population into the future, he said. They’ll build a new field station with a “head-start” facility to bring eggs in from the wild to be hatched in captivity and raised to tadpoles, increasing survivorship to nearly 100 percent. Then, they’ll relocate the frogs to a better habitat in streams that are inaccessible to them because of the range.

The team also plans to hire one full-time biologist to monitor the population and maintain the equipment. The Arizona Center for Nature Conservation/Phoenix Zoo pledged $40,000 for the 2017-18 fiscal year to help build a small harlequin frog rescue and breeding center on site. The center will work to increase the number of frogs and have an infection-free population from the fungal disorder.

“The catalyst, in part, was ASU via the PitchFunder campaign, so we remain eternally grateful for the head start we received in saving the species,” said Schipper. “We’ll also be starting a small campaign now to help cover staff salaries since the Phoenix Zoo can’t cover international salaries.”

Schipper’s team also started a local, environmental education program with startup funds from the Rufford Foundation. The program will partner with the Costa Rican water and aqueduct ministry to educate locals about water quality and how animals and humans need access to clean water.

“It’s a win-win,” Schipper said. “To promote conversation, human health and well-being together.”

Help Sparky and researchers in the School of Life Sciences save the Talamancan harlequin frog from going extinct. Dodge invasive trout predation and contaminated fungal water along the way. Make sure to capture the frogs before opening the door to a safe habitat for the critically endangered amphibian.

Choose your level of difficulty:

EASY
NORMAL
HARD
NIGHTMARE
Use the keyboard arrows to move
your Sparky character.

Press Enter to start the game.

ASU professor awarded grant for research in adolescent substance use

The National Institute on Drug Abuse and Office of Behavioral and Social Sciences Research has awarded Kit Elam, an assistant professor at Arizona State University, the Mentored Research Scientist Development Award.The award provides support of intensive, supervised career development in the biomedical, behavioral or clinical sciences leading to research independence. Elam was chosen for his proje...

ASU professor awarded grant for research in adolescent substance use 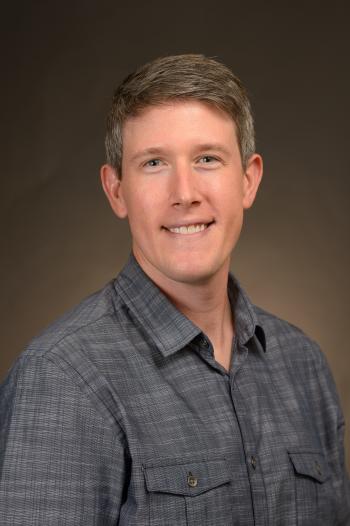 “I’m particularly interested in child aggression and genetic influences,” said Elam, a faculty member in the T. Denny Sanford School of Social and Family Dynamics. “Those are two bodies of research I’ll try to be merging and looking at their interplay. The third body of research is how that contributes to substance use later in life and whether there’s intervention effects that buffer the influence of children’s genetics on negative family environments or between negative family environments and substance use later in life.”

A benefit of winning the award is the ability to train with a number of mentors who will help Elam gain expertise in a number of realms. During the first two to three years of the grant, Elam will be supported to build advanced skills and tools in bioinformatics.

“The award is a more unique mechanism because it includes a training and a research portion,” Elam said. “I’ll focus on building those skills and methods first and then in the final two or three years, there will be more of a focus on publishing and applying those methods to looking at gene environment interplay in the family.”

Elam has been interested in studying child development since before he went into graduate school. He began developing research skills by looking at genetic influences on behaviors in twins, but his post-doctoral research led him to be more interested in how the family environment contributes to behavioral outcomes.

“A lot of people do research on negative family environments and substance use, or they do research on genetics and substance use, or intervention research, but not a lot of research is looking at all of these pieces together,” Elam said. “Biological scientists are looking at the function of genes on behavior, but nobody has really taken those skills and applied them to family studies.”

Elam’s ultimate goal for the project is to better the lives of children and their families through his research.

“I hope to develop new methods that will advance the field of behavior genetics and family studies,” Elam said. “I think this can be accomplished through developing applied materials from this research for communities, but also interventions and refining interventions so they’re more effective for at risk youth.”

His findings will be regularly published through academic manuscripts throughout the course of the project. He will also put together conference presentations based on his findings. At the end of his grant, Elam hopes to write a R01 Research Grant to the National Institute on Drug Abuse to continue his research.

“I’ve proposed to submit about two manuscripts every year in the first couple years where it’s less research heavy and three or four in the later years,” Elam said. “Hopefully, I’ll be able to translate some of that to both applied materials for children and families but also some of this research should inform intervention designs to help refine intervention designs for children and families.”

Elam is eager to take on the project. His new and innovative approach to researching substance use in adolescents is pivotal to the development of family studies.