Through a significant $50,000 AIGA Innovate Grant from and partnership with AIGA National, AIGA Arizona and The Design School at Arizona State University’s Herberger Institute for Design and the Arts will partner to start the new executive training program Sprints for Cities.

The idea first came into being last October, when Steven Tepper, dean of the Herberger Institute for Design and the Arts at Arizona State University, and Julie Anixter, AIGA executive director, spoke together about the future of design education at Phoenix Design Week. They championed the idea that the power of designer’s creative process should be unleashed to solve complex societal problems in cities.

AIGA Arizona President Kyle Larkin said, “Sprints for Cities will bring diverse groups of leaders into the same room to design solutions for problems/challenges facing their communities. It will train leaders throughout the AIGA network to go back to their communities and do work for the social good. Designers, in collaboration with city leaders, can be instrumental in solving any place-based problem. We intend to connect with and amplify the work that other groups, like Bloomberg Philanthropies Innovation Teams are doing as well.”

The grant will fund the creation of a curriculum for leading design problem-solving sprints, with expert training to be developed by experts at The Design School. ASU and the local AIGA chapter will work closely with city leaders to identify problems that need solving. The grant will fund a series of engagements, or "sprints," between designers, other creatives, entrepreneurs, community leaders and the city departments that lead on the problems in order to come up with solutions.

The sprints have two benefits — they help the city address unique solutions to key issues; and they create a community of design, business and community leaders who are trained in processes that create social good in society. Sprints will not only build capacity to use design for social good, but they will also introduce design methodologies to a range of city leaders and develop a strong network of individuals who understand the value of design and the assets that designers bring to problem solving.

Sprints for Cities is spearheaded by Tepper and Jason Schupbach, director of The Design School, with ASU and Liz Magura, Larkin, Kathy Morgan and Marissa Groom with AIGA Arizona and Anixter and Laetitia Wolf with AIGA National.

Arizona State University's School of Politics and Global Studies (SPGS) hosted the annual meeting of the Peace Science Society (International) on Nov. 2-4 at the Tempe Mission Palms. Cameron Thies, professor and director of SPGS, served as the local host for the event. This 51st meeting of the society included more than 250 scholars from the U.S. and around the world.The society was founded in 196...

Arizona State University's School of Politics and Global Studies (SPGS) hosted the annual meeting of the Peace Science Society (International) on Nov. 2-4 at the Tempe Mission Palms. Cameron Thies, professor and director of SPGS, served as the local host for the event. This 51st meeting of the society included more than 250 scholars from the U.S. and around the world.

The society was founded in 1963 in order to promote the social scientific study of peace, conflict and conflict management in international relations. Since that time it has held workshops and conferences and developed a journal known as Conflict Management and Peace Science toward that end. 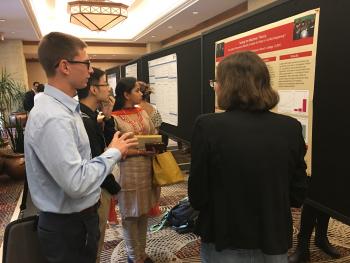 The final session of the annual meeting of the Peace Science Society (International), hosted by ASU, was devoted to two dozen posters primarily highlighting the work of graduate students on similar topics. Download Full Image

The 2017 meeting at ASU began on Nov. 2 with nine separate workshops held at the Memorial Union designed to foster collaboration in the creation of data sets and the publication of book-length projects and to tackle real-world problems of conflict management. Topics covered in these workshops included the role of UN peacekeepers, designing security institutions in developing countries, the development of text-as-data methods, the use of game theoretic models for civil conflict, mediation and cybersecurity among others.  The workshops were attended by more than 100 participants engaged in these focused research projects.

The main conference started on Nov. 3 at the Tempe Mission Palms with a memorial session devoted to former SPGS faculty member Professor Will H. Moore. Moore had previously served as president of the Peace Science Society. Colleagues, former students, friends and family attended the event to remember his contributions to the field.

The remaining sessions on Nov. 3-4 were devoted to individual papers. The topics covered the usual wide range of issues connected to the social scientific study of peace and conflict, including work on insurgency, counter-insurgency, territorial conflicts, terrorism, nuclear proliferation, interstate war, coups, election-related violence and repression, as well as methodological advances in data collection and analysis. The final session was devoted to two dozen posters primarily highlighting the work of graduate students on similar topics.

For more information on the Peace Science Society (International), please see its webpage at http://sites.psu.edu/pssi/.