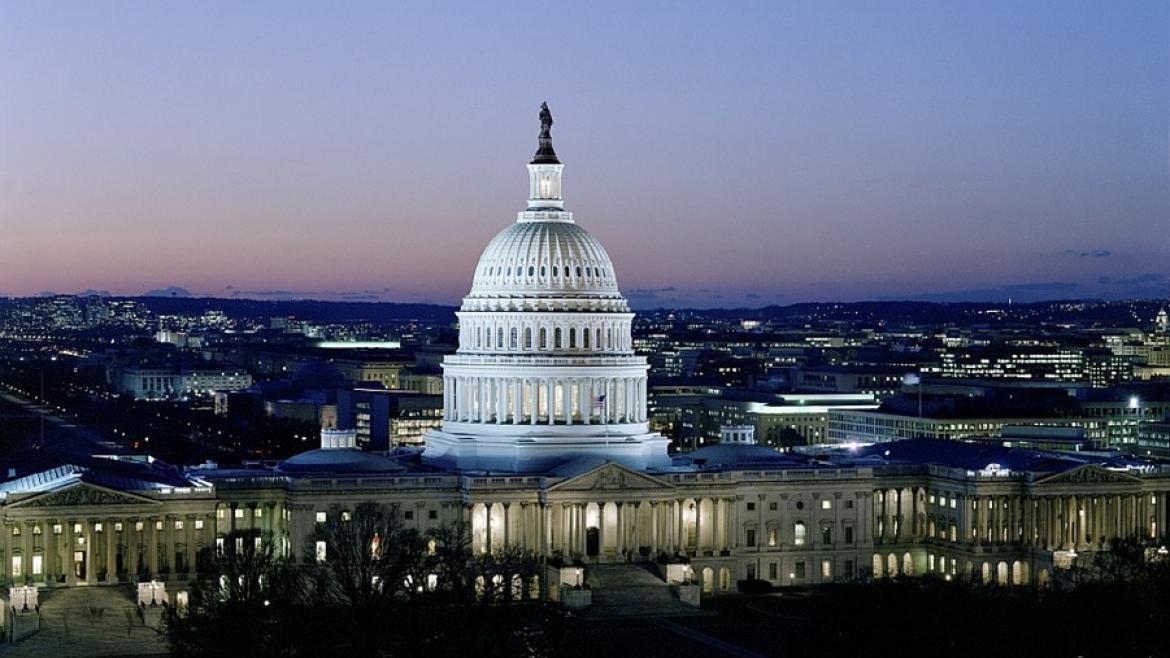 Would America benefit from a three-party political system?

Not since the 1960s has the United States been so divided, largely split into two political camps.

But what if a third major political party emerged in the U.S.? Would it lead to more nuanced political discourse? Is a third major party even possible, or is the two-party system “baked in” to the United States’ existing election laws and legislative rules?

ASU Now spoke with Sarah Shair-Rosenfield, a professor in Arizona State University's School of Politics and Global Studies whose research focuses on the politics of electoral reform, to discuss this possibility. 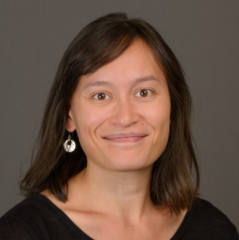 Question: How likely is it for a three-or-more-party system to emerge in this country at some point?

Answer: It is difficult to predict, though the odds are not high. It's easy to assume that voter practices and norms surrounding elections — that people typically vote for either Democrats or Republicans — are the reason for this. But the actual electoral rules structuring congressional elections are one of the main sources of why the two-party system remains so strong.

We have what are called "winner take all" electoral districts for Congress: Every electoral district (House and Senate) has one seat available, and the winner is the person who gets the largest number of votes in that district, even if that number isn't a majority. This type of system nearly always produces two major parties — political scientists refer to this as "Duverger's Law." This is true even if third parties occasionally are able to break through in seat victories in a few districts, like when Green candidates do really well in elections in particular cities. This effect is compounded by the fact that there are really very few limits on campaign finance contributions and fundraising. This favors existing parties and incumbent candidates, so smaller parties may at best see only limited gains in the long run.

Q: Is our government able to deal with something akin to what we see in other countries where a third or fourth party may hold substantial numbers of seats?

A: To my knowledge, there's nothing in the Constitution or enabling legislation that prevents a coalition government from forming in the U.S. If a third party emerged, like a Progressive Left or a separate Tea Party, and their candidates won House or Senate seats, there isn't anything keeping them from caucusing with the Democrats or Republicans to form a majority to pass laws or joining the cabinet of a Democratic or Republican president to put those laws into practice.

But the big challenge for a multi-party U.S. Congress is the fact that the U.S. has what scholars of comparative politics would call relatively "undisciplined" legislative parties. In other words, while many other countries' legislatures have either formal or informal rules in place to encourage or force party members into voting on bills along party lines, the U.S. Congress has little in comparison. That means that individual U.S. legislators can basically vote on bills as they please from issue to issue, rather than having to vote with their co-partisans. While such individuals might be portrayed or viewed as "defectors" or "traitors" on those issues by their national party leaders, they might also come across to their constituents as "sticking to their principles." Without other penalties or incentives in place to keep them from voting against their own party, this individualistic aspect of U.S. legislative behavior sometimes makes it difficult for even two parties to come to consensus and govern.

It isn't clear how adding a third or fourth party would really affect this, since those parties presumably wouldn't have any more "disciplined" members in Congress. I guess the point is that ungovernability in Congress doesn't necessarily stem just from having two parties who rarely see eye-to-eye on policy.

Q: Have we seen the successful rise of an outside third or fourth party anywhere in the world?

A: The most notable are in the United Kingdom and Canada, which both have similar electoral rules as the U.S. has, including "winner take all" electoral districts for their national legislatures. Both historically have had two parties at any given time. However, both have also had successful third and fourth parties to varying degrees since the mid-20th century. In both cases those parties had to compete for decades to make big enough gains and establish themselves as viable opponents and coalition partners.

Q: In your opinion, would it be healthier for this country to have a three-party structure given how divisive we’ve become as a nation?

A: I think it's pretty clear from recent U.S. elections that a lot of people are unhappy with what they see as the status quo of the Democratic and Republican party platforms and policies. I do think that if both parties faced viable challengers, it would probably force them to more seriously reevaluate their current policy preferences and strategies, though whether they would actually change what they do once in office might be more limited. (What parties do to get elected versus what they do once they are in office is rarely the same thing.) But I'm not sure that simply adding another party or two would solve a lot of the problems of political polarization we've seen in the U.S. in recent years. I say this because a lot of other countries with rising polarization in the electorate have more than two political parties, so it’s pretty clear that having more parties doesn't necessarily reduce the potential for more fixed or extreme political positions to emerge.

I think the healthiest thing would be to try to figure out ways to remind members of both parties in Congress that their jobs are to make policy and govern this country, not just serve their constituents or voting base or party elites. That doesn't really have anything to do with how many parties there are; that has to do with the kinds of individuals we elect as well as the fact that there will always be another election they are looking forward to.

We consumers are mad as ... well, actually we’re not as mad as we used to be.A new study released by Arizona State University that measures “consumer rage” found that the survey respondents were not as enraged over problems with goods and services this year compared with two years ago, the last time the biennial study was done.The 2017 Consumer Rage Survey found the lowest levels of rage in ... 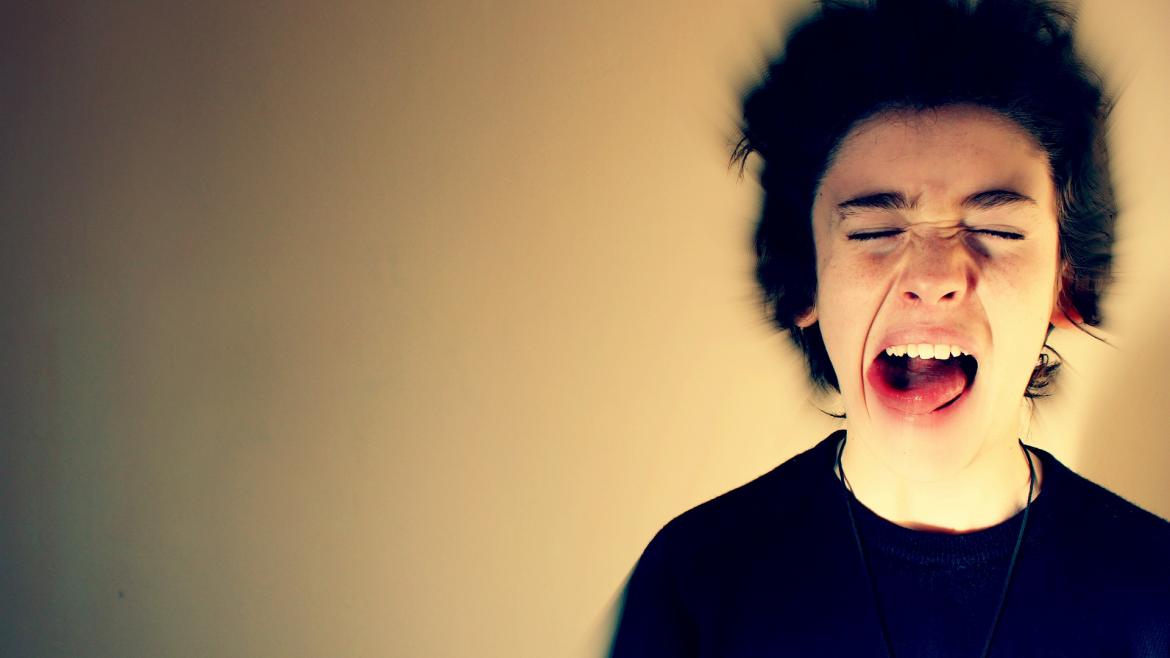 We consumers are mad as ... well, actually we’re not as mad as we used to be.

A new study released by Arizona State University that measures “consumer rage” found that the survey respondents were not as enraged over problems with goods and services this year compared with two years ago, the last time the biennial study was done.

The 2017 Consumer Rage Survey found the lowest levels of rage in more than 15 years. About 56 percent of people had rage — defined as “extremely upset” or “very upset” — over problems with goods or services in the past year. That compares with 66 percent reporting rage in 2015, and about 68 percent in the studies dating back to 2003.

So are we calmer or just resigned to bad service?

“I think rage has declined because people have become desensitized to customer problems, especially with technology,” said Marc Grainer, chairman of Customer Care Measurement and Consulting. His firm released the study in collaboration with the Center for Services LeadershipThe Center for Services Leadership is a research center that combines scientific research with business best practices. in the W. P. Carey School of Business.

Although extreme anger has decreased, the overwhelming majority of consumers still feel frustration, disappointment and anger over problems with purchases. And it’s no wonder: On average, it took four attempts to resolve the problem.

And businesses are not offering repairs or apologies, further angering customers.

“People get very emotional about their most serious problems,” Grainer said. 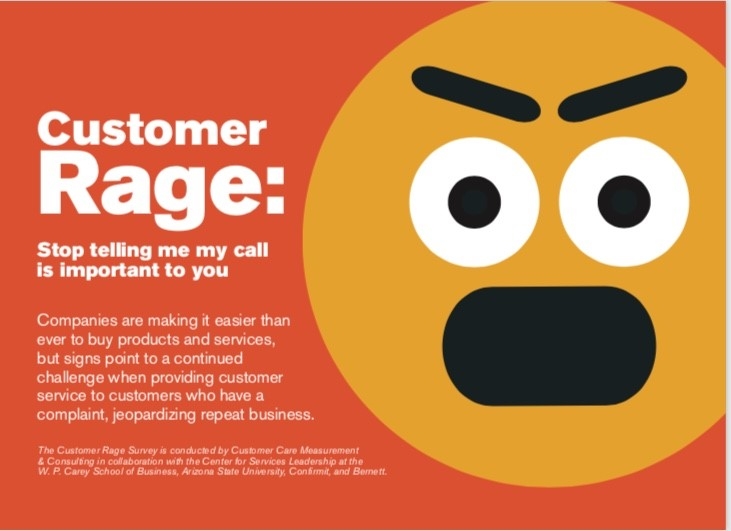 The phone survey was done in August 2017. 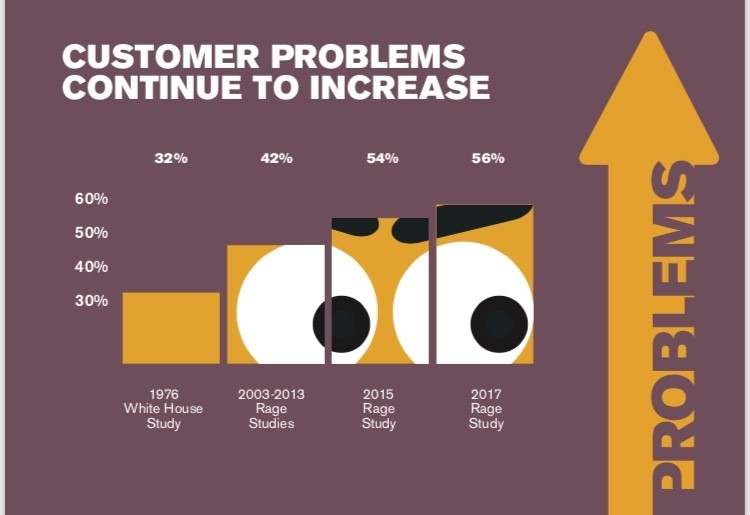 The 1,000 survey respondents were representative of the population by age, gender and income. 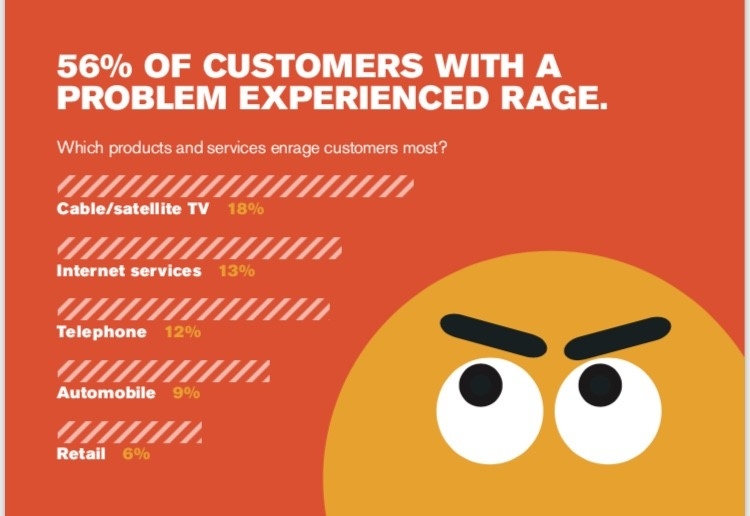 The original survey was done by the White House in 1976.

About 70 percent of respondents said they complained by phone. 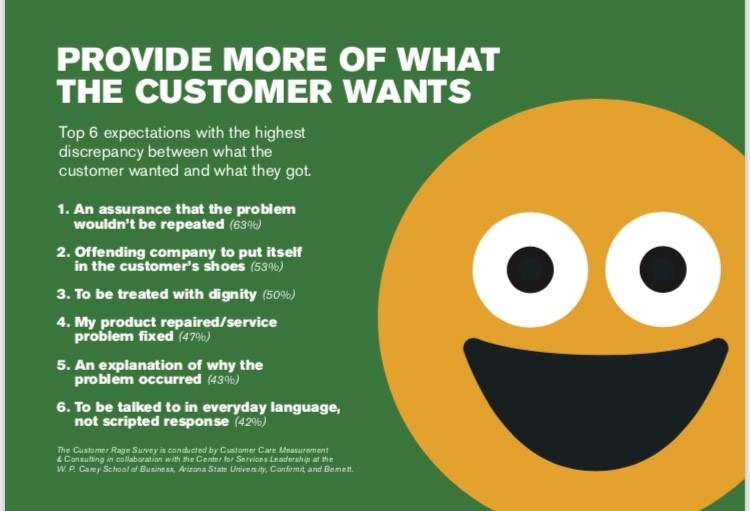 The results showed that consumers aren't getting what they want when they complain.

He spoke at a recent workshop called “Compete Through Service” held by the Center for Services Leadership, which revealed the study findings and focused on ways that businesses can improve customer relations.

There's a lot of work to be done, according to Mary Jo Bitner, co-executive director of the Center for Services Leadership.

"The challenge for companies is still that people who are disappointed in how their complaints are handled, even if they don't get to the level of rage, are still very unlikely to purchase again from the company involved," she said. "It's hurting their business."

Among the most important findings from the survey:

• More stuff is breaking: 56 percent of respondents said they had a problem with a product or service purchased last year, compared with 32 percent in the first poll, done in 1976.

• Technology is a headache: The products and services that were most frequently cited as problematic, in order, were cable and satellite TV, internet providers, landline and cell service, automobiles, computer equipment, noncomputer consumer electronics, restaurants, non-automobile large-ticket products, banking and medical care.

• Consumers aren’t getting what they want: About 87 percent said they wanted “to be treated with dignity,” while 37 percent said they were. Three-quarters wanted a repair or fix, and only 29 percent got that. And 60 percent wanted an apology, which was provided to only 31 percent.

So how do people express their rage? Surprisingly, only about a third grumble online about it. Of the internet ranters, the most common place to complain was Facebook. Only about 9 percent of the respondents said they vented on a review website, such as Yelp.

But Grainer said that social-media complaints reach an average of 825 people.

“But negative word-of-mouth will kill you.”

One of the workshop presenters was the Co-Operators, a large Canadian insurance and financial-services company that embarked on a massive project to boost customer service in 2004. The firm went through an intensive re-branding campaign that touted its service-oriented image, as well as retraining employees and installing new computer systems.

It didn’t work. A subsequent consumer-satisfaction survey found the firm to be average and identified 11 “points of pain” for customers.

“It was a bit of a gut shot,” said Rick McCombie, executive vice president of the company.

One example: After customers called with a home or automobile claim, more than 60 percent were calling right back and asking, “What’s next?”

“We thought our claims people must be doing a terrible job on the phone. So I listened to the calls, and the calls were great. The fact is, these people were just in a car accident or had their homes burglarized and they were traumatized,” McCombie said.

“So a simple change was to email right after the call with all the information, and the call backs went down by 70 percent.”

Bitner said that companies must do the hard work in this area.

"Companies that really get it and know how important complaint handling is will do a lot of fine-grained research to figure out what they need to do," she said.

Find out more about the Center for Services Leadership here.