It’s First Friday at the Children’s Museum in Phoenix, Arizona. Amid the kids exploring giant bubbles, a kiddie car wash, and a paint maze, there is an 8x4 folding table with a red tablecloth draped over it. Behind the table sits the smiling face of Annabelle Atkin, a doctoral student at the T. Denny Sanford School of Social and Family Dynamics at Arizona State University. An assortment of children’s books featuring characters with diverse racial backgrounds is spread before her. To her right is a colorful poster describing her multiracial families project. 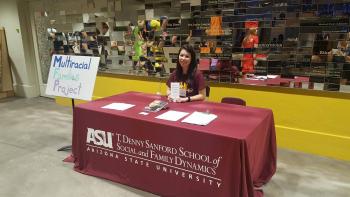 “I think [this project] alone is sparking conversations between parents and their kids when they might not normally think to bring it up,” she said.

Atkin knows firsthand about growing up in a multi-racial family. She was raised in a suburb of Cleveland, Ohio, the daughter of an Asian mother and white father. At the age of 14, she moved to Storrs, Connecticut and later attended the University of Connecticut, where she received her bachelor’s degree in psychology and Asian American Studies. Atkin is currently pursuing her doctorate in family and human development at ASU. 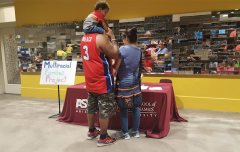 As the evening comes to an end a young family approaches the table, the parents shining with excitement. “Hey, that's you! You're multiracial.” They seem excited to see children’s books that represent their family. They begin speaking with Atkin about her project and ask how they can become involved. These are the types of connections Atkin was hoping to make when she set up her table that day.

Atkin is still looking to recruit multiracial families with children of all ages. If you are the parent of multiracial children or if you’re interested in learning more, you can contact Atkin at alatkin@asu.edu or visit the Facebook page: "Multiracial Families Project."

The reign of corrupt Filipino dictator Ferdinand Marcos in the 1970s and '80s was marked by a heavily controlled, strictly censored national media.His fall from power in 1986 resulted in the removal of those constraints and a swell in independent reporting that came with a set of problems all its own, fueled by fierce competition and mounting sensationalism.“It was a free for all,” said Sheila... 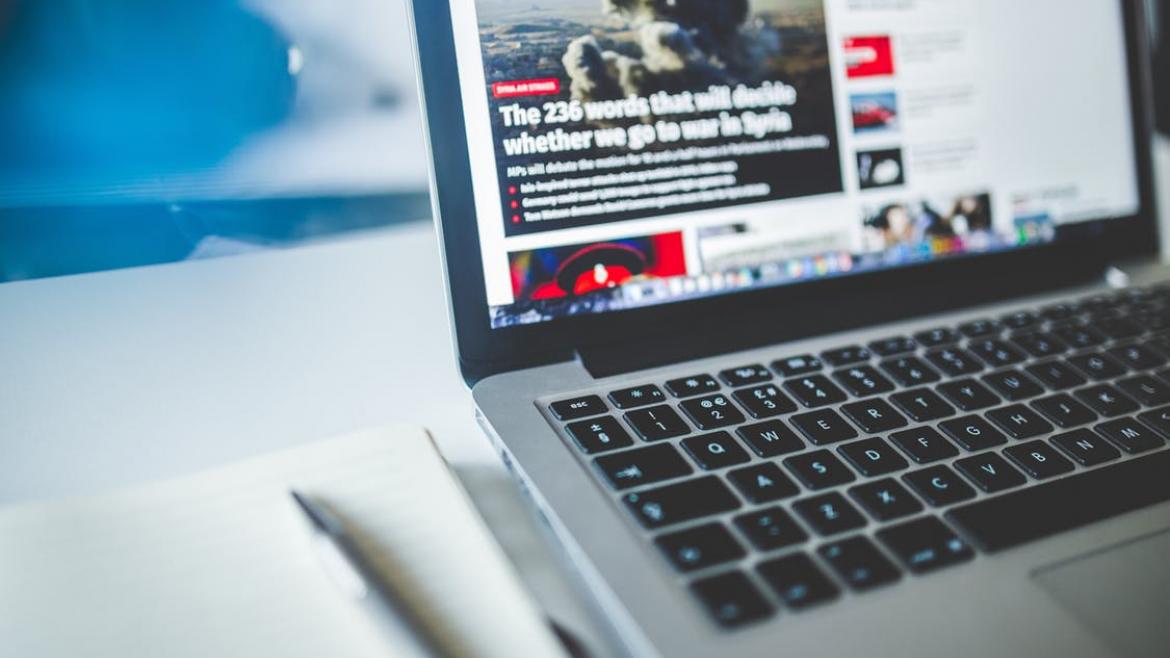 The proliferation of fake news is a global media phenomenon.
October 27, 2017

The reign of corrupt Filipino dictator Ferdinand Marcos in the 1970s and '80s was marked by a heavily controlled, strictly censored national media.

His fall from power in 1986 resulted in the removal of those constraints and a swell in independent reporting that came with a set of problems all its own, fueled by fierce competition and mounting sensationalism.

“It was a free for all,” said Sheila Coronel, professor, dean and director of the Toni Stabile Center for Investigative Journalism at Columbia University.

She was there to see it all happen, reporting for underground opposition outlets during Marcos’ final years in power, and then for mainstream outlets on human-rights issues and the growing democratic movement after his fall.

On Tuesday, Oct. 31, Coronel will speak to ASU students and faculty on the current state of the news media in Southeast Asia as part of the Center for Asian Research’s Asia Mediated Lunch and Lecture Series.

The talk, “Speaking Truth to Power in the Era of Fake News and Propaganda: Insights from the Philippines and Southeast Asia,” will examine how news media in the region — and elsewhere in the world — are being challenged by the online dissemination of “fake news” and propaganda.

“The challenge, especially for the ordinary citizen, is how to make sense of this deluge,” Coronel said.

Her talk will consider lessons learned from the not-so-distant past and how we might apply them to this modern-day conundrum in order to find truth amid an increasingly polarized and propaganda-rich media environment.

Here, Coronel explores the topic in advance with ASU Now. 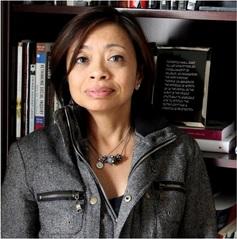 Question: What does news media in Southeast Asia look like right now?

Answer: The same things that are happening elsewhere in the world — including in the U.S. — are happening in Southeast Asia as well. The business model of independent journalism is failing. At the same time, the ubiquity of the internet and the availability of Facebook, particularly — which many Southeast Asians get for free on their mobile phones — have provided alternative channels for propaganda, misinformation and fake news, oftentimes overwhelming the work done by traditional news organizations.

There have been efforts by political parties and other groups to propagate this information to demonize certain sectors of the population, such as drug addicts in the Philippines, Muslims in Myanmar and non-observant Muslims in the case of Indonesia. This has led to the coarsening of public discourse as well as to the incitement to violence toward these demonized sectors of the populations.

Q: What was it like reporting under such tight restrictions during the Marcos dictatorship, to suddenly having freedom afterward?

A: During the Marcos dictatorship, most of the media was owned by either relatives or business cronies of Marcos and his family. So there was strict censorship in most of the newspapers, and everything we wrote was vetted or even photographed or censored. All photos of Marcos had to show that he was robust, strong and capable — especially during the last years of his dictatorship when he was very ill and underwent a kidney transplant. Many of the Marcos-controlled media outlets could not present that truth.

There was a big difference when he fell out of power. Before that, issues like human-rights abuses were taboo. All of that changed almost overnight. He fell in a popular uprising that lasted three and a half days. There was a new government, all the constraints on media were removed, the organization of media changed. People could report freely. But then what became the problem was the media environment became more competitive, there was sensationalizing of news, especially on TV. It was a free-for-all.

Q: What insights can Americans and the rest of the world glean from what happened then and what is happening now in Southeast Asia?

A: I think we all have the same problems in terms of dealing with the deluge of propaganda and fake news coming from various channels, produced by people who just want to make money or governments who want to make political gains. It has become increasingly difficult to stem the tide of hate speech, false information and propaganda, coupled with the real efforts of the government to demonize the press and destroy the reputation of the press as a purveyor of information. The challenge, especially for the ordinary citizen, is how to make sense of this deluge.

I remember there were demonstrations against propaganda in the last years of Marcos. There was a demand for freedom of information. The public saw the importance of a free press to defend their own rights. The U.S. is not under a dictatorship, but there are [people in power] who want to muddle the press. So it’s important to have public support; the crusade for a free press should not just be limited to journalists. A free press is strongest if it has popular support. That can be patronizing independent newspapers or going to the streets to demonstrate if press freedoms are threatened. The battle should be fought by citizens, not just the press alone.

Q: How does a free press help citizens defend their rights?

A: A free press is important to be able to express yourself freely and to be informed so that you can take action. In many ways, having a free press is a prerequisite for exercising your other rights. For example, your right to get public services. How do you know what rights you’re entitled to if you don’t have that information and the press doesn’t disseminate that information publicly? And there’s your right to hold the government accountable; you cannot exercise that right if you don’t have that information. Without the press providing information with which you can make decisions and can be informed about your rights and about your government, it’s impossible to exercise your full rights as a citizen.

Q: What can be done about the spread of misinformation right now?

A: Citizens need to be more critical of the information they receive. Social media is still quite new, so people have not yet been able to develop the skills and the faculties to be able to discern real information from false information. But also, this is media we’ve never seen before because it’s controlled by algorithms that are not transparent. We don’t know what information is being withheld from us. We don’t know whether we have been exposed to fake news, for example, because the speed and velocity with which news information is produced makes it nearly impossible to verify and to vet.

We’re at a very early stage of this phenomenon, so over time, I hope we will develop both technological and other means that are able to exercise some sense of control or rationality in this information technology ecosystem. Right now, people are confused and overwhelmed by propaganda, but over time, we will develop critical faculties and develop better means of vetting information.

'Speaking Truth to Power in the Era of Fake News and Propaganda: Insights from the Philippines and Southeast Asia'

What: Lunch and a lecture by Sheila Coronel of Columbia University as a part of the ASU Undergraduate International Studies and Foreign Language Asia Mediated Lecture Series.