“Music is infinitely functional,” Barnwell said. “It ties the whole existence of a culture together. It is the intermediary between one culture and another — music is everything.” 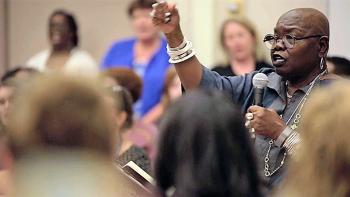 Barnwell teaches how to create and connect communities using the power of the human voice — one communal voice.

As the inaugural guest artist of the Herberger Institute for Design and the Arts’ Projecting All Voices initiative, Ysaÿe Barnwell helped honor, validate and advance all voices. The Projecting All Voices initiative recognizes that every person, regardless of social background, deserves an equal chance to help tell our nation’s and our world’s stories.

Barnwell says that it is through the communal voice that people can begin to create and implement positive, harmonious strategies for change impacting the individual, the family, friends, the community, the country and the world. 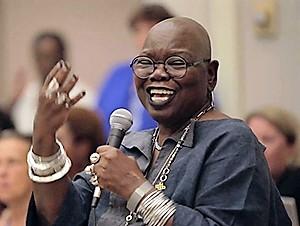 Barnwell uses the African world view in her community building work because, she says, African music has function and purpose — it tells the story of African history, values and culture through oral tradition. Africans communicate and connect with all levels of their hierarchical world view through music that is related to life. Everything is documented through music.

When Africans were enslaved, they brought the African way of looking at life — including music — with them. As the traditional call and response music evolved, the African American spiritual was born.

Barnwell says if we listen to the music — look carefully at the lyrics and listen to the rhythms — we get to know the culture it’s from.

“This was a life-changing experience,” FitzPatrick said. “It’s about being more open to other cultures and the exciting differences between them, and celebrating those differences rather than trying to erase them or denigrate them.”

Barnwell is passionate about using music as a catalyst for bringing people together.

“A community is created by the music and lyrics of ordinary people,” she said.

Barnwell also says that everyone can sing. In her community sing sessions and lectures, she teaches how to sing music in the African American oral tradition. Participants who cannot read music only need to hear the music to sing it. Barnwell also pioneered the use of sign language to teach people who could not hear how to sing music.

Undergraduate music education major Connor Siroky said, “The experience taught me that there are people out there who aren’t ‘artists,’ but ordinary people who are capable of creating art.”

Barnwell’s community sings incorporate four different melodies sung simultaneously in a “round.” She demonstrates all parts so participants hear every part to sing. At the end of the session, participants discover that when several voices sing different songs simultaneously, another voice emerges — “one voice.”

“Students, faculty and staff in the School of Music said they were inspired by Barnwell’s vision of peacebuilding through music,” said Deanna Swoboda, associate professor of tuba and euphonium. “She truly elevated everyone around her, as a scholar, a musician, a person who brings people together through song. I realized the positively powerful effect that singing can bring to everyday life.”

Barnwell is a commissioned composer, arranger, singer, choral clinician, researcher, educator, actress and author. Her residency was made possible in part by a Mellon Foundation grant, the ASU Herberger Institute for Design and the Arts, and the School of Music.

Bill Dauksher has worked in clean rooms and labs for almost 30 years. For him, putting on lab coats, booties, a face mask and gloves is like putting on pants for the rest of us.The manager of the Solar Power Laboratory at Arizona State University’s Research Park, Dauksher conservatively estimates he has used more than 10,800 pairs of gloves.“Wow, that’s a lot of gloves!” he said.That’s o...

Tempe campus
Thousands of lab gloves at ASU will now be recycled, thanks to student.
October 24, 2017

Program started this fall at Tempe and Polytechnic campuses, to expand to others

Bill Dauksher has worked in clean rooms and labs for almost 30 years. For him, putting on lab coats, booties, a face mask and gloves is like putting on pants for the rest of us.

The manager of the Solar Power Laboratory at Arizona State University’s Research Park, Dauksher conservatively estimates he has used more than 10,800 pairs of gloves.

That’s one scientist. Now extrapolate that to every scientist, student and lab at ASU. That is indeed a lot of gloves.

Starting this fall, lab gloves will begin to be recycled at ASU. It’s the work of an undergrad putting his education to use before graduation.

Junkee Justin Ahn, 23, is a junior majoring in sustainability. Interning at paper giant Kimberly Clark, Ahn noticed they have a nitrile glove recycling program. Ahn thought of all the labs at ASU’s campuses and had an idea.

Most students are required to take a lab. There are about 135 general chemistry lab sessions per week, with 24 students per lab. With the help of John Crozier and Beatriz Smith of the School of Molecular Sciences, Ahn surveyed 1,120 students. They told him they use an average of 1.5 pairs of gloves per lab session. That’s thousands of pairs of gloves per week. And that doesn’t include researchers, other disciplines or other campuses.

For now, lab-glove recycling (via special cardboard boxes) is available only at the Tempe and Polytechnic campuses. As the program — called RightCycle — spreads to other labs and campuses, Ahn expects more than 20,000 gloves to be recycled per week. 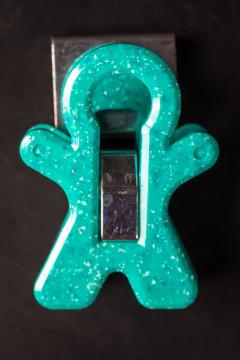 Ahn will recycles the nitrile gloves through Kimberly-Clark, which turns them into new plastic products, like this magnetic clip.

The used gloves are sent to recycling centers. They’ll be processed into plastic pellets or nitrile powder, which can then be used to manufacture anything plastic.

“A small input like this bin can make a huge difference,” he said.

A few weeks ago he presented his work at the nation’s biggest higher-education sustainability conference, the Association for the Advancement of Sustainability in Higher Education conference in San Antonio.

It’s not just about gloves.

“We can use this thinking to introduce other materials,” Ahn said.