Judy Woodruff at ASU: Journalists are not the 'enemy of the American people'

She and the late Gwen Ifill, co-anchors of “PBS NewsHour,” received the 2017 Walter Cronkite Award for Excellence in Journalism

Judy Woodruff and the late Gwen Ifill, the award-winning co-anchors and managing editors of the “PBS NewsHour,” were awarded the 2017 Walter Cronkite Award for Excellence in Journalism by Arizona State University on Thursday.

Woodruff, the anchor and managing editor of the “PBS NewsHour,” received the 34th annual award, given by the Walter Cronkite School of Journalism and Mass Communication, at a luncheon ceremony in downtown Phoenix. Roberto Ifill accepted the award on behalf of his sister Ifill, who served with Woodruff as co-anchor and co-managing editor from 2013 until her death from cancer in November.

Woodruff reflected on how the news business is in flux from a changing business and technology landscape, and not necessarily for the better.

“Newspapers have been closing down, reporters by the hundreds and even thousands have been laid off,” she said. “Too many state capitals, city halls, boards of education are going uncovered around this country today because there simply aren’t enough reporters to cover them. Once Americans found they could get their news for free, they didn’t need to buy a newspaper. And with newspapers for so long having set the pace reporting in communities across the nation, that has been a blow to the public’s ability to know what’s going on.”

Technology, which has taken so many jobs away, has also provided a new source of news, she said.

Excellent reporting still can happen. Woodruff talked about the Weinstein scandal, which was broken by the New York Times and the New Yorker magazine, and the exposure of drug lobbyists worsening the opioid crisis by encouraging Congress to hobble the DEA by CBS 60 Minutes and the Washington Post.

“Mainstream journalist organizations, which took months and months of work to nail it down,” Woodruff said in praise of both investigations. “That’s the mainstream media working for you.”

Social media is not going to replace professional journalism, she said.

“Now the news is coming to us from every conceivable source, from places that never thought they were going to be in the news, like Facebook and Twitter,” Woodruff said. “We thought they were there to do something else. We are watching the transformation as these organizations try to understand what their role is. They’ve made some big mistakes, and they’re trying to figure out how to fix that.”

As part of Woodruff’s two-day visit to ASU, she reported for the NewsHour from the Cronkite School. She sat down with Cronkite faculty member Jacquee Petchel and students Claire Caulfield and Jasmine Spearing-Bowen to discuss a major national investigation into water quality as part of the Carnegie-Knight News21 program at the Cronkite School. She also interviewed U.S. Rep. Ruben Gallego as part of an ongoing NewsHour series on the future of the Democratic Party.

Woodruff’s visit included an appearance on the public affairs program “Arizona Horizon” on Arizona PBS, which is operated by the Cronkite School. Woodruff fielded questions from host Ted Simons on a variety of topics ranging from her career and friendship with Ifill, to her memories of Walter Cronkite. After the taping, Woodruff, Simons and “PBS NewsHour” Executive Producer Sara Just took questions from Cronkite students in the audience. They discussed the convergence of media, fake news and the importance of journalism, among other topics.

The job of journalism is to be the public’s eyes and ears, Woodruff said Thursday at the awards luncheon. Journalists are needed to find answers day after day.

“People often ask me if the news business is going to survive,” she said. “Yes, it absolutely is because we will always need to know what’s going on around us, what opportunity and what peril out there lies around the corner, what our fellow human beings are up to.” 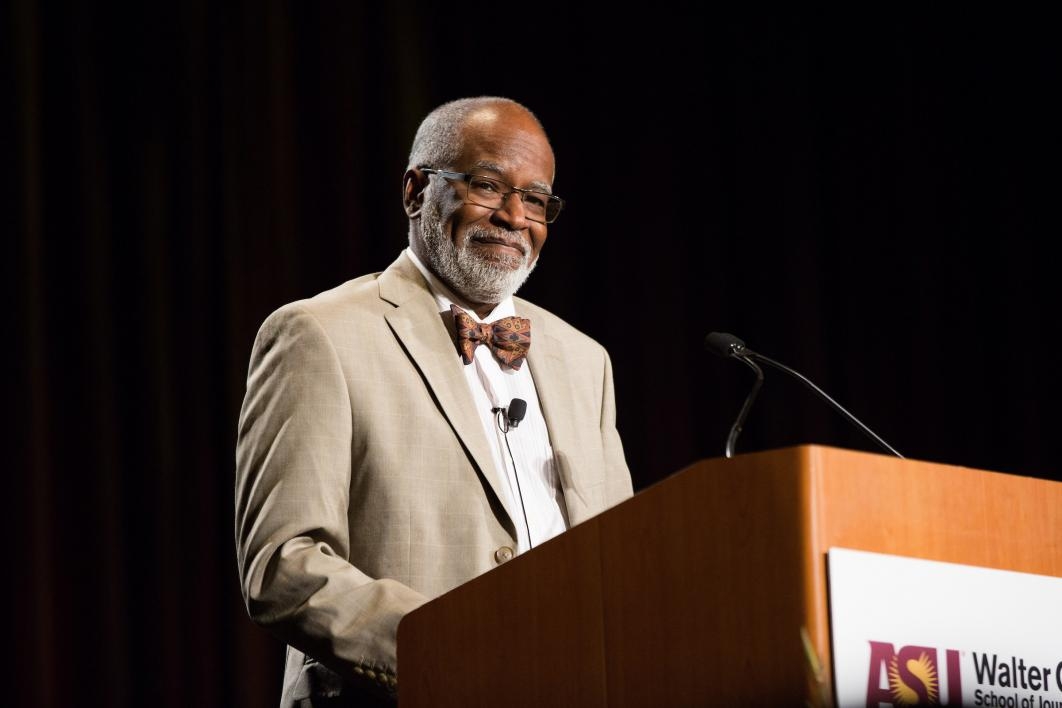 Roberto Ifill accepts the Walter Cronkite Award for Excellence in Journalism in honor of his late sister Gwen Ifill on Thursday in Phoenix. Gwen Ifill and Judy Woodruff, award-winning anchors of the “PBS NewsHour," both received the award. 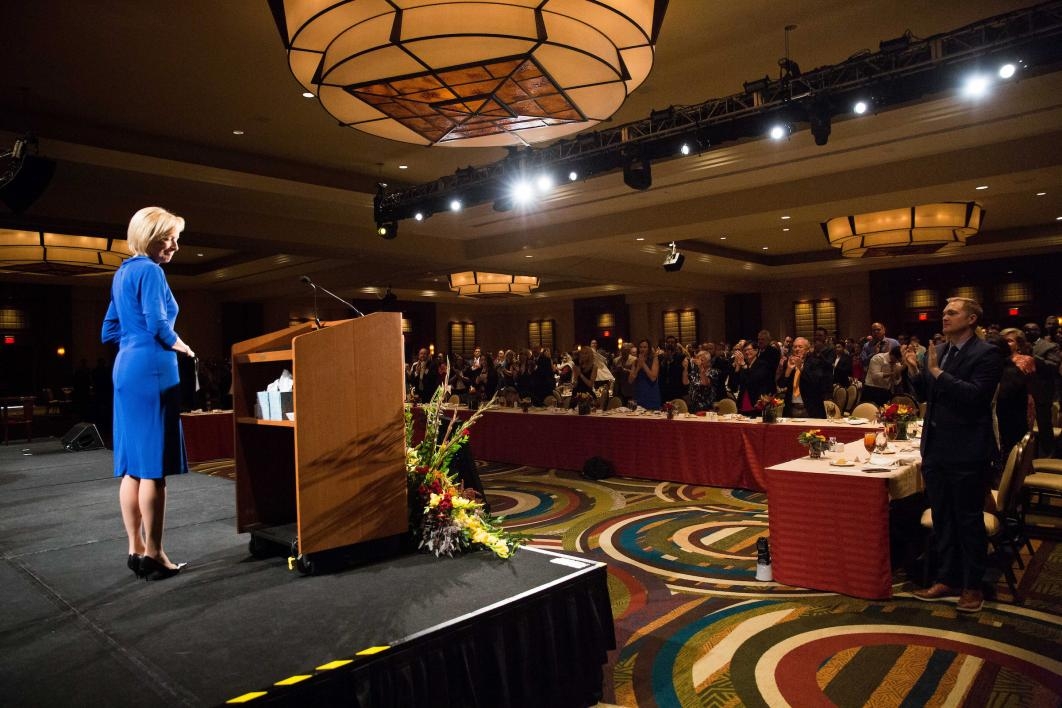 Judy Woodruff is honored by a standing ovation after accepting the Walter Cronkite award Thursday at the Sheraton Grand Phoenix hotel. 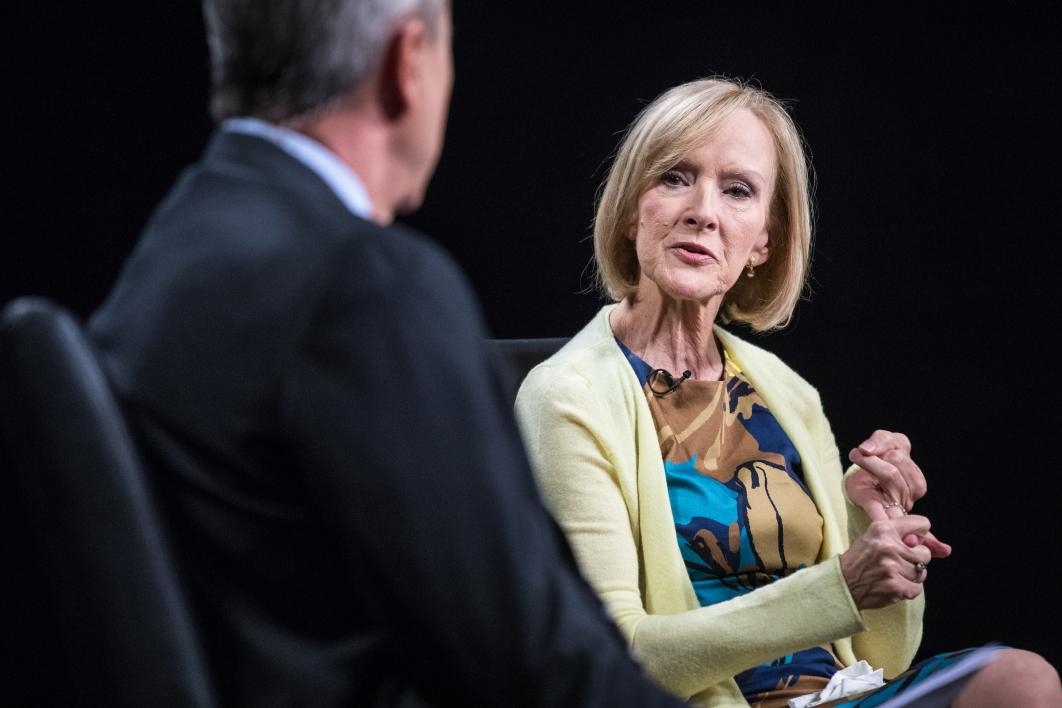 Judy Woodruff talks with host Ted Simons during a taping of "Arizona Horizon" on Wednesday at the Cronkite Building, a day before she received the award. 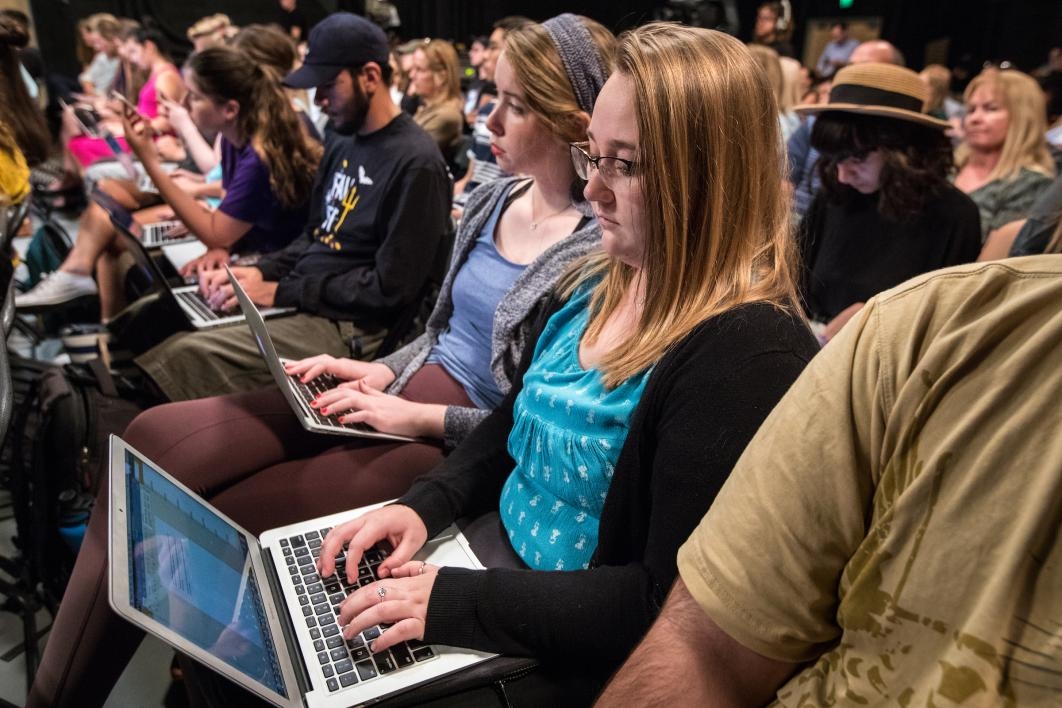 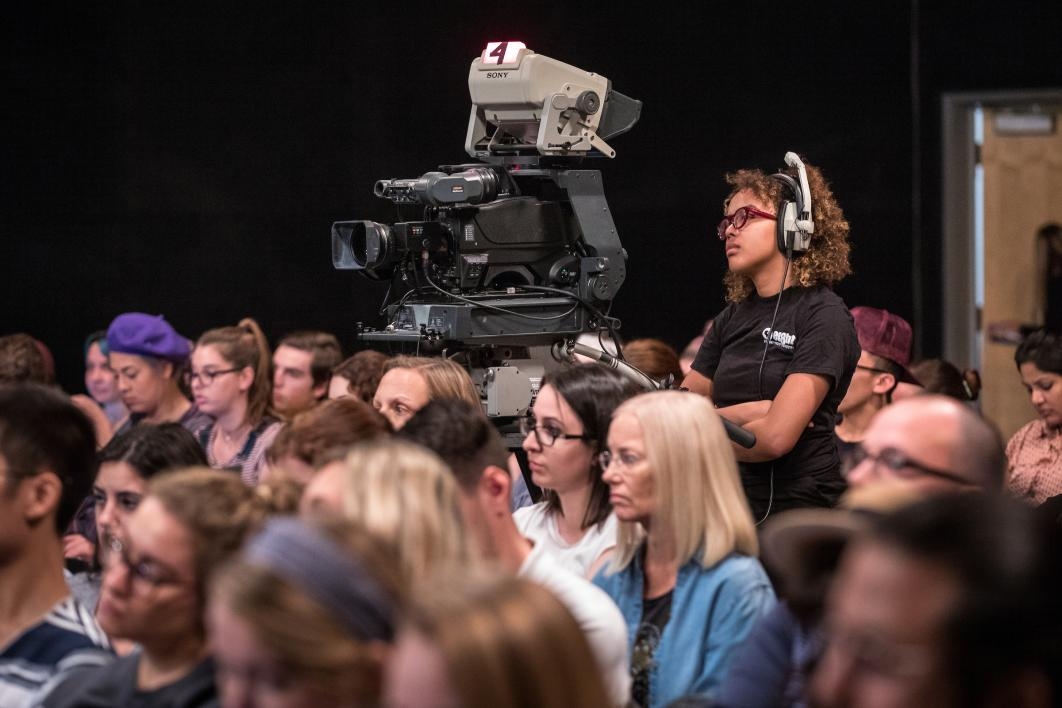 After the Horizon taping, Judy Woodruff, Ted Simons and “PBS NewsHour” Executive Producer Sara Just took questions from Cronkite students in the audience. They discussed the convergence of media, fake news and the importance of journalism, among other topics.

The Cronkite School contributed to this report. Top photo: Judy Woodruff addresses the audience after accepting the 34th annual Walter Cronkite Award for Excellence in Journalism at the Sheraton Grand Phoenix hotel on Thursday afternoon. The 2017 awardees were both Judy Woodruff and the late Gwen Ifill, award-winning anchors of the “PBS NewsHour." Photo by Deanna Dent/ASU Now

Arizona State University student Andrea Smolsey went swimming with the frogs — or rather smelling with the frogs — this summer during a six-week internship at the Construction Engineering Research Laboratory in Champaign, Illinois, in which she helped develop an odor library for frogs to investigate the decline in amphibian populations.Smolsey, an undergraduate in American Indian Studies and ...

Arizona State University student Andrea Smolsey went swimming with the frogs — or rather smelling with the frogs — this summer during a six-week internship at the Construction Engineering Research Laboratory in Champaign, Illinois, in which she helped develop an odor library for frogs to investigate the decline in amphibian populations.

Smolsey, an undergraduate in American Indian Studies and the School of Life Sciences, has been interested in molecular biosciences and biotechnology since high school. 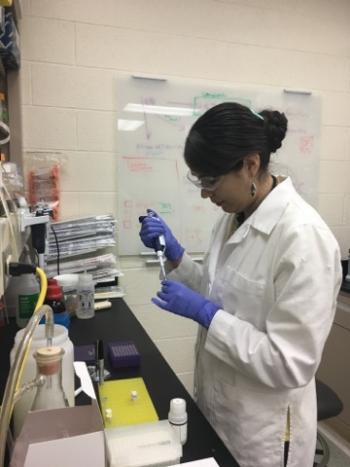 After conducting a meticulous bacterial transformation experiment her junior year of high school, she expanded her research by relating her findings to diabetes. As an Apache, Smolsey was happy to personalize the project’s scope to her community because Native Americans have a greater chance of developing diabetes than any other U.S. racial group, according to the Center for Disease Control and Prevention.

“I was able to focus on a minority ethnic group, which was interesting,” said Smolsey. “The implications were profound and purposeful to give back to my people. I don’t know what else I would enjoy as much as this.”

Her passion for research followed her into college. Smolsey has conducted research in a few labs as an undergraduate at ASU. The skills she has gained came in handy when Laura Gonzales-Macias, associate director of the American Indian Student Support Services, recommended her to apply for an internship.

The U.S. Army Corps of Engineers’ Construction Engineering Research Laboratory has developed a student internship and mentoring program at their facility in Champaign, Illinois. The program gathers research to enhance the Army’s ability to design, build, operate and maintain its installations and contingency bases while ensuring environmental quality at the lowest life-cycle cost.

During her summer internship where she focused on developing the odor library for frogs, she worked toward figuring out what types of odors a frog can smell as a means of building a chemically-mediated conservation effort.

“They don’t know what kind of chemical binds to receptors and what outcome it produces,” Smolsey said. “Once they find out there is a reaction to a scent, they can test if certain smells attract or repel the frogs. And the idea behind that is, certain frog species are declining so they want to non-invasively facilitate movement of these species through chemically mediated conservation efforts.” 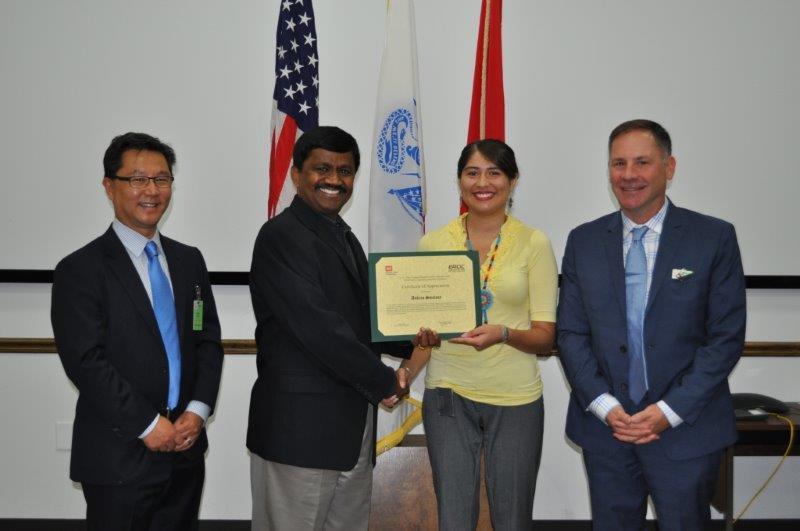 During her time in Illinois, and as one of the youngest students in the lab, Smolsey ran into a few challenges that helped her grow.

“Most of the other interns were undergraduate seniors who were about to graduate or had just graduated, so they kept saying how young I was and how ahead I was. There was a disconnect there, but I got used to talking with them.”

Smolsey was also one of the only Native students involved in the research. When questions about her heritage were brought up, Smolsey said she was not surprised.

She grew up on a military base with people from many different backgrounds. She had to hurdle many instances when people would ask about her heritage without being culturally sensitive. Regardless, Smolsey would answer the questions as a proud Native American.

“We just expect it sometimes,” said Smolsey. “I’m all for educating people about my heritage so I don’t mind, but it was interesting that it still happened. It’s a weird thing. You feel uncomfortable being asked these questions, but at the same time you’re prepared.”

Despite having to overcome these hurdles, Smolsey persisted.

“We need native people in these environments. I don’t see a lot of representation of natives in lab coats and goggles, specifically in that research area,” she said. “It takes a lot of strength to do, as a native person. I was given the opportunity to do research and have pictures representing myself, my family and this community very respectfully.”

She is thankful for her experience to not only participate in relevant and meaningful research, but to educate others and represent her community.

“I say only positive things came out of doing it,” she said. “I gave a presentation at the end, where I introduced myself in Apache, which I thought was amazing. You never hear about a research presentation starting in Apache, but it was done and I was the one who did it.”