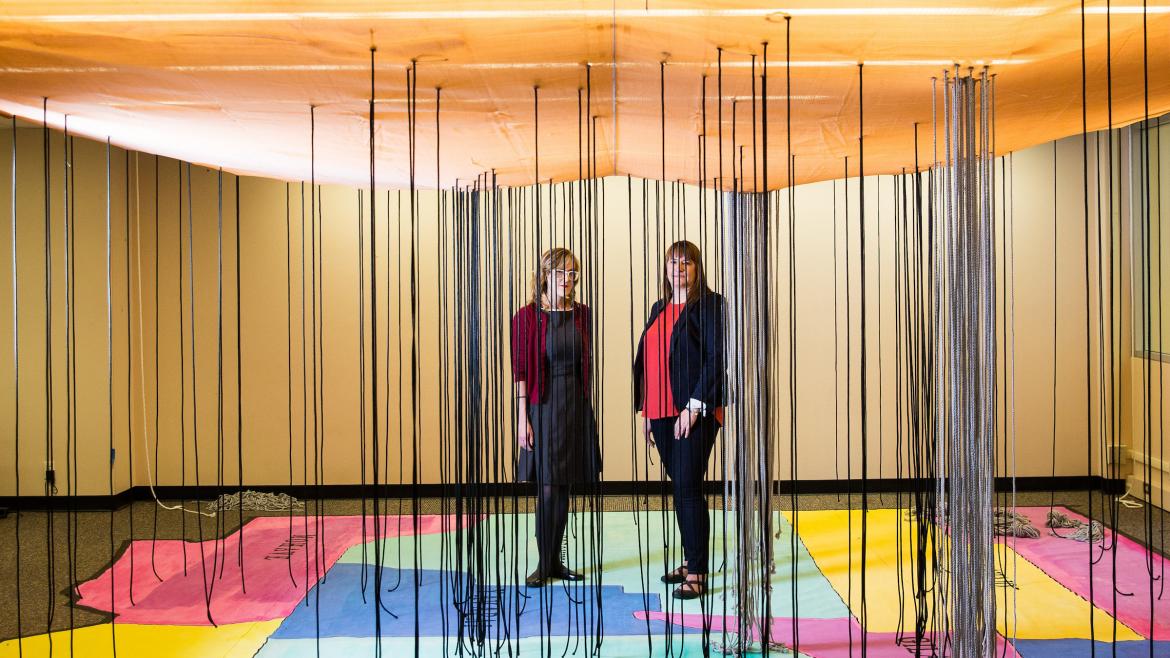 Interactive exhibit at ASU Library explores toll of 1918 flu pandemic in Arizona, including the thousands of underreported Native deaths

So unusual was the 1918 influenza, which killed an estimated 3 to 5 percent of the world’s population, that its symptoms were often misdiagnosed, resembling cholera or typhoid.

As opposed to juveniles, the elderly and those with weakened immune systems, this particular strain of flu virus, commonly referred to as the “Spanish flu,” took its deadliest toll on young adults who were previously healthy.

The speed with which it killed was also remarkable, claiming an estimated 25 million lives in its first 25 weeks and causing life expectancy in 1918 to drop by about 12 years in the United States, alone.

“This flu was unusually dangerous. ... We’re due for another flu like this,” says ASU scholar Jacqueline Wernimont.

Together with Nexus Lab project manager Elizabeth Grumbach, Wernimont — an assistant professor in the Department of English and director of the Nexus Lab, an initiative within the Institute for Humanities Research — has set out to highlight the issue of pandemic with a focus on Arizona.

The two are opening up for public feedback a prototype of their multimedia installation at ASU Library.

"Counting the Dead: Arizona and the Forgotten Pandemic" aims to re-embody Arizona’s influenza mortality data from a century ago, illustrating the ways in which illness had spread across our then-young state.

With this exhibit, the digital humanities scholars are also telling a story many have not heard — that flu deaths in Arizona, in 1918, were underreported by as much as 1,000 percent.

“Much of what we thought we knew about the flu in Arizona is wrong,” Wernimont said. 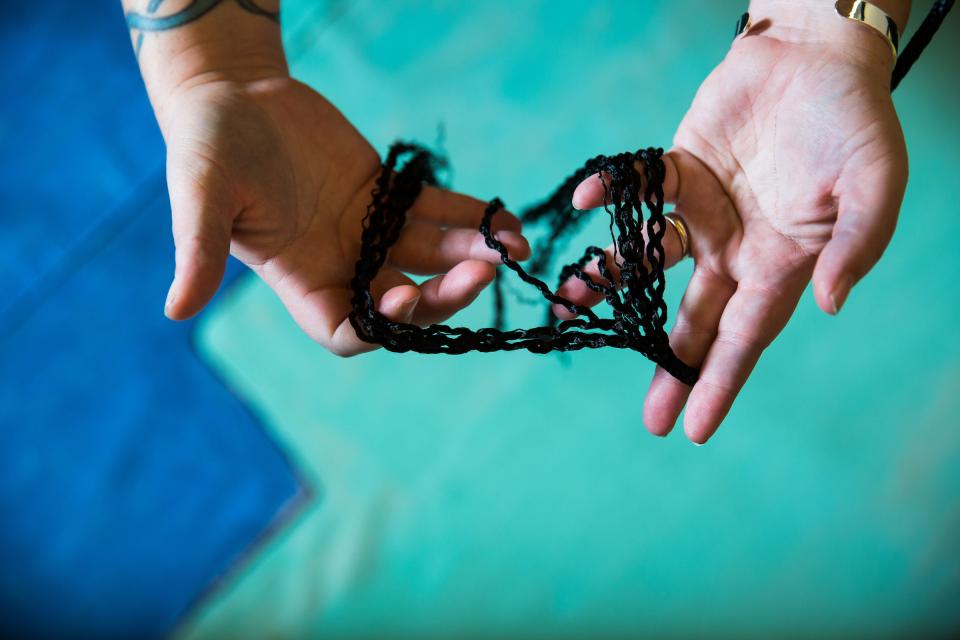 ASU Assistant Professor Jacqueline Wernimont shows the cord she has unraveled, which represents 12 influenza deaths in the exhibit "Counting the Dead: Arizona and the Forgotten Pandemic." Visitors are encouraged to unravel the cords, based off Victorian mourning braids, to distinguish the individuals killed by the 1918 flu pandemic. Photo by Deanna Dent/ASU Now

One hundred years ago, Arizona was a young state, not even a decade old — so young, in fact, that it did not yet report mortality statistics to the federal government.

When it comes to flu fatalities, however, a lack of data is not uncommon, Grumbach said.

“Underreported deaths align with what scholarship has said about the flu, but the lack of data for this flu, particularly in Arizona, is unique,” she said.

What the researchers discovered while digging through data from the Arizona State Board of Health — and many, many death certificates — were a lot of holes, specifically in the reporting of Native American deaths.

Working with documents from the Bureau of Indian Affairs and the work of scholars researching flu cases on the Navajo reservation, Wernimont and Grumbach arrived at a much higher total number of deaths in Arizona than had been previously reported.

“The data was messy and incomplete, so getting the numbers right became a much larger part of the project than we had planned,” Wernimont said. “We had started out thinking naively that there was existing data on this, but once we got through all the death records, it became clear there was a disparity between what was reported and the numbers we were uncovering.”

Drawing on the work of flu scholars Benjamin Brady and Howard Bahr, which uses oral history and ethnographic accounts of influenza mortality in Navajo communities, Wernimont estimates that nearly 4,000 Native American deaths were missed in the official influenza mortality statistics.

Between the death certificates and estimates, the ASU team’s work suggests that the official mortality numbers for Arizona are as much as 1,100 percent underreported.

Unfolding of flu in time and space

How we experience data is at the heart of Grumbach and Wernimont’s exhibit prototypeIt is located in the upper concourse of Hayden Library (room C2)., which explores alternative ways of understanding — through touch and sound — the unfolding of influenza in time and space.

“We spent a lot of time thinking about how to best memorialize human lives,” Grumbach said.

Wernimont and Grumbach are building on the work Wernimont has executed as part of the Human Security Collaborative, which has taken real-time data from cellphones and presented it as sound and tactile feedback for audiences. This historical project is an extension of that work, Wernimont said.

“We’re interested in how you can take numbers and tell stories in ways that encourage affective and sensorial reactions,” Grumbach said. “How can you re-embody the data — take the numbers out of the table and return it to bodies in order to give it a lasting impact.”

In the same way that a quilt resonated deeply with a nation just waking up to the AIDS epidemic, “data represented by feminized labors, such as textile work, can offer powerful narratives that restore humanity, through acts of care, and spur new thinking around complex issues,” Wernimont added.

Grumbach and Wernimont’s “acts of care” can be seen in almost 500 ropes they’ve cut, tied and suspended from above in Hayden Library. Each rope is a 12-strand braid, with each strand representing one person who died from the flu.

Joining the tactile elements, Wernimont has hand-crafted sonification of the data, giving people a sense of how the flu spread across the year. In addition to experiencing what has already been created, Wernimont and Grumbach are encouraging visitors to participate in the acts of care.

“People are welcome to sit with the mortal ropes and unbraid them, in effect, helping to bring individuals even further out of the aggregated data,” Wernimont said.

“Counting the Dead” will be open to visitors through Nov. 12. A self-guided tour of experiential data in three-dimensional space, the installation prototype is set to coincide with the Society for Literature, Science, and the Arts (SLSA) annual conference, taking place Nov. 7–12 on ASU’s Tempe campus, with the theme “Out of Time.”

“This year’s SLSA conference is about time and memory and spaces,” Wernimont said, “so this fits well with our exhibit. We’re trying to re-embody a forgotten memory.”

The unexpected success of Lin-Manuel Miranda’s Broadway hit “Hamilton” went a long way to rekindle Americans’ interest in the story of our nation’s founders.At the center of the musical was the legendary rivalry between Alexander Hamilton and Aaron Burr. Their volatile relationship and the wider drama surrounding America’s founding served as the basis of a lively discussion Wednesday n... The truth about our Founding Fathers

The unexpected success of Lin-Manuel Miranda’s Broadway hit “Hamilton” went a long way to rekindle Americans’ interest in the story of our nation’s founders.

At the center of the musical was the legendary rivalry between Alexander Hamilton and Aaron Burr. Their volatile relationship and the wider drama surrounding America’s founding served as the basis of a lively discussion Wednesday night at ASU Gammage in Tempe.

The audience was welcomed by Paul Carrese, professor and director of Arizona State University’s School of Civic and Economic Thought and Leadership (SCETL), who promised the topics discussed would “reveal how the controversies and drama of our founding era” — such as vitriolic rhetoric, issues of truth in the press and questionable dealings with foreign powers—  are still relevant to politics today.

Though they differed on certain points, there was one thing the pair whole-heartedly agreed on: There are many misconceptions in our modern-day understanding of Hamilton and Burr as individuals, as well as their relationship.

Hamilton, thanks in large part to the craze created by the musical, is nowadays often revered as an infallible hero. But in his time, he was known for being controversial, prickly and even vain.

His popularity waxed and waned after his death, rising after the Civil War because of his emphasis on support of manufacturers and the union, and falling when FDR (who favored fellow Founding Father Thomas Jefferson) came to power. In the 1970s and '80s, Jefferson fell out of favor due to race issues, and Hamilton was back on the uptick, with Ron Chernow’s 2004 biography and Miranda’s soon-to-follow Broadway show solidifying his position in current popular culture.

“Hamilton has had a roller-coaster experience with his reputation,” McNamara said.

Burr, on the other hand, maintained a more steady public awareness, albeit not without its inaccuracies. Part of the reason for that is there has been much more fiction than fact written about him, with claims that he lacked character or was somehow less noble or moral than his contemporaries resulting in him being relegated to the role of the “American Judas” or “bad boy” of the founders, Isenberg said.

“To rely on Hamilton’s opinion of Burr is like relying on Ken Starr’s opinion of Clinton,” she said, when in actuality, Burr was a feminist who fought for the rights of immigrants, worked to reform voting rights at the state level and advocated for more transparency in the Senate.

Burr also “introduced a series of innovations we now take as givens,” Isenberg said. He collected data on voters and their issues of concern, he went to polls and gave speeches and, most importantly, he wrote the charter for the earliest predecessor of JPMorgan Chase, insisting it provide loans to lower-income citizens.

Hamilton also left behind institutions that are still here today and still work, McNamara said, including Bank of New York, the Coast Guard and the U.S. Treasury. Not to be forgotten are his numerous writings, including “The Federalist,” a first edition of which ASU has acquired and which attendees at Wednesday night’s discussion were able to observe on display.

And the famous duel? Also riddled with historical inaccuracies. 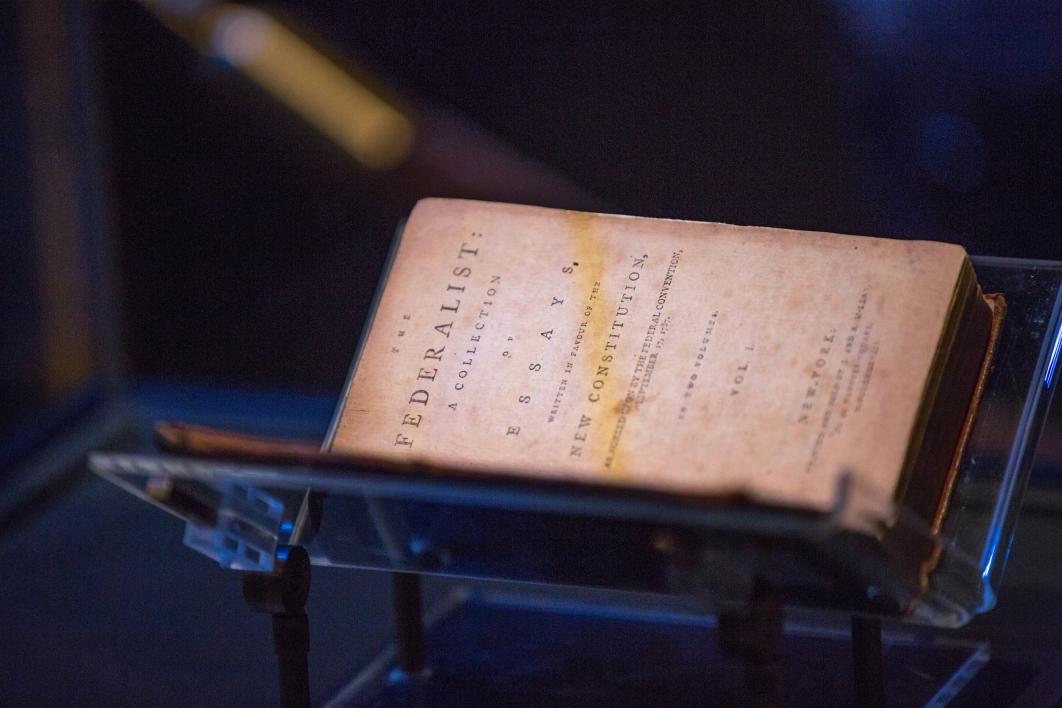 ASU has acquired a first edition of "The Federalist" (also called the Federalist Papers), written by Alexander Hamilton, James Madison and John Jay (but mostly Hamilton) to promote the ratification of the U.S. Constitution. It was on display at Wednesday's discussion at ASU Gammage. After the discussion, members of the audience wait in line to view "The Federalist," one of a limited first run of 500. It will be on display at ASU Gammage during the run of "Hamilton" the musical, which opens in Tempe on Jan. 30. 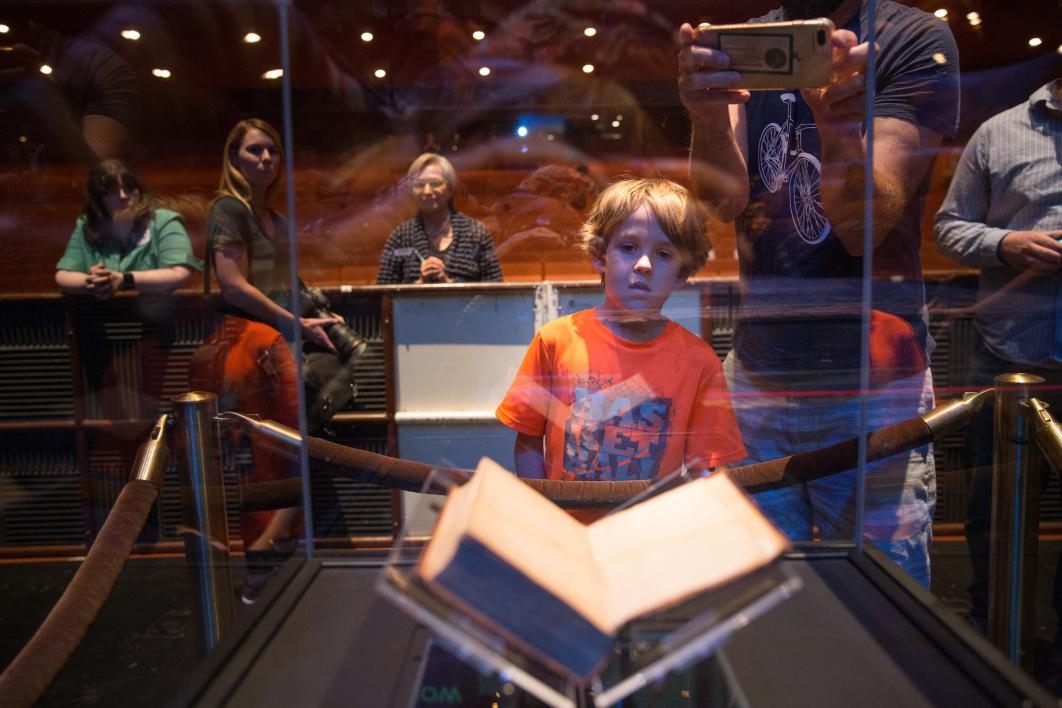 Harry Cooper, 5, peers through the protective glass case at the important document, acquired by ASU's School of Civic and Economic Thought and Leadership.

There are several outlandish theories as to what could possibly prompt two well-respected and educated figures to come to arms — including one in which Hamilton was rumored to have had a sexual desire for Burr, resorting to the duel as a death wish — but it’s really quite simple:

“Dueling was a common aristocratic practice back then in Europe and in the military,” Isenberg said. In America, it was a way to defend your reputation and move up the pecking order “in a world where one’s class identity was not as secure as in Europe.”

There are also rumors about whether Hamilton meant to throw away his shot, or even did return fire.

“Who knows [what really happened]?” McNamara said. Any way you look at it, it was unfortunate.

As for the accuracy of Miranda’s “Hamilton,” Isenberg and McNamara feel that despite some historical inaccuracies, it did a great job of capturing the feel and emotion of the events it portrays. However, Isenberg cautions against the temptation to put any historical figure on a pedestal.

It may make us feel good about the past, but it doesn’t really engage the true history, she said. And though we may feel the urge to make our Founding Fathers into demigods who represent all that is good about America because they embody our origin story, we would do better to try to understand them in the context of their time; not as role models or geniuses, but as men who had to make difficult decisions to solve problems.

Top photo: Author Nancy Isenberg and ASU Professor of Practice Peter McNamara discuss Aaron Burr and Alexander Hamilton on Wednesday evening at ASU Gammage. Isenberg is the author of "Fallen Founder: The Life of Aaron Burr," and McNamara is part of ASU's School of Civic and Economic Thought and Leadership, who specializes in the history of Alexander Hamilton. Photo by Anya Magnuson/ASU