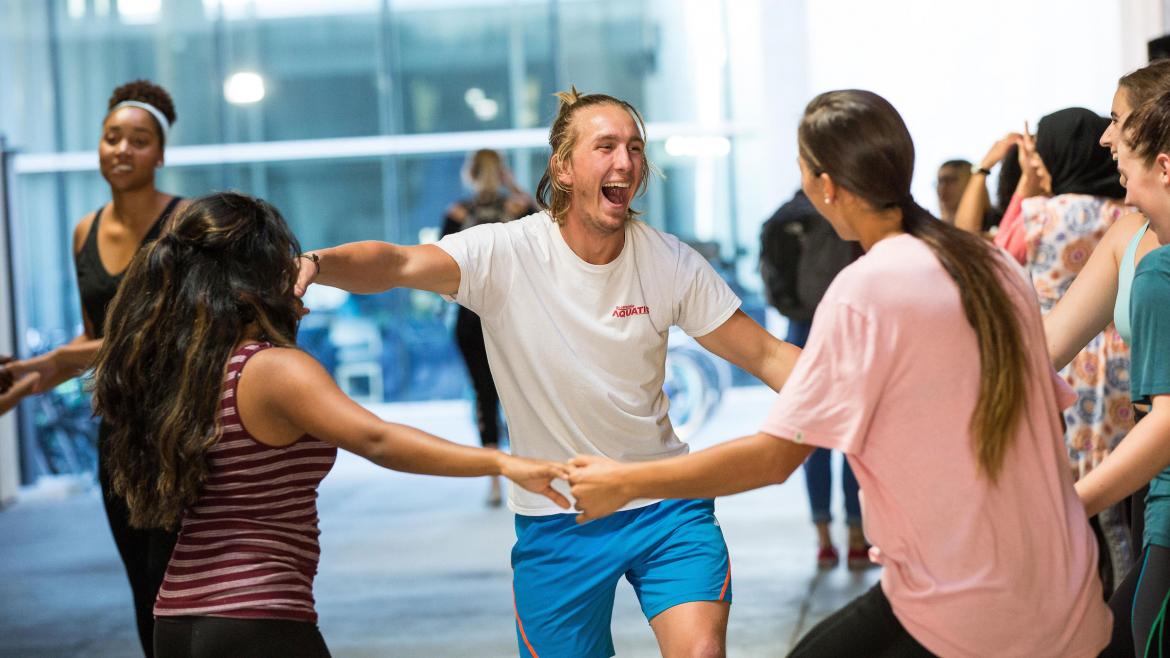 Ever since Dean Steven J. Tepper arrived at ASU, he has been working on a way to bring the diverse students, faculty, staff and alumni of Herberger Institute for Design and the Arts together. Given that ASU’s Herberger Institute is the largest comprehensive design and arts college in the nation, with five separate schools and an art museum, the task he set for himself was daunting.

On Oct. 12, together with the advice and support of design and arts faculty and staff, he made it happen.

In the “Musical Trash and Toy Circuits” workshop, participants dug through piles of random objects with guidance from Althea Pergakis, from the School of Arts, Media and Engineering, and then made music. It was, as promised in the description, “weird.”

Meanwhile, the museum conducted several workshops based on its popular Escape the Museum events and secret vault tours.

Third-year music education undergrad Katie Demassa, who had never been in the museum before Herberger Institute Day, said the event was “cool. I think I’ll go back (to the museum) now, because it was actually really fun.”

“You joined little groups, so we got to meet new people,” she said.

Dicker said she hoped Herberger Institute Day would become an annual event, “just for the exposure to different things outside of your school.”

Digital culture undergrad Lisette Borja, who sported what looked like a nasty open wound on one of her forearms, took a behind-the-scenes tour of the costume shop and ghoulish makeup workshop. (The wound she explained, was from the workshop.)

Her favorite part of the day, she said, was getting to spend time in the costume shop.

“I really really love costuming, but I’ve never done anything with it for my major,” shd said. “I liked just being in that area and seeing what the other students in that major were doing.”

It was a sentiment others seemed to share. As one group toured the costume shop, a student said aloud, “OK, this is cool. Why did I not know about this?”

Stephani Etheridge Woodson, faculty in the School of Film, Dance and Theatre and director of the Herberger Institute’s Design and Arts Corps, led more than 100 students in a “Find Your People” workshop: Participants were divided into teams, and each team had to complete two challenges as part of its quest. (Sample challenge: Find the COOR covered walkway. Ask someone how they are feeling today. Based on their response, create an indie rock band album cover photo. Photograph it and post it to Instagram.) For the third challenge, the teams had to locate the dean and complete an exercise with him. The final challenge involved individual team members each picking a balloon with a “conversation starter” on it and taking it out into the world so they could continue “finding their people” as they went throughout the day.

Tepper, who had a meeting with ASU President Michael Crow after the exercises with students, took a balloon along for the president. The question on the balloon read, “What makes you feel really alive?” President Crow’s answer: “Waking up in the morning.” 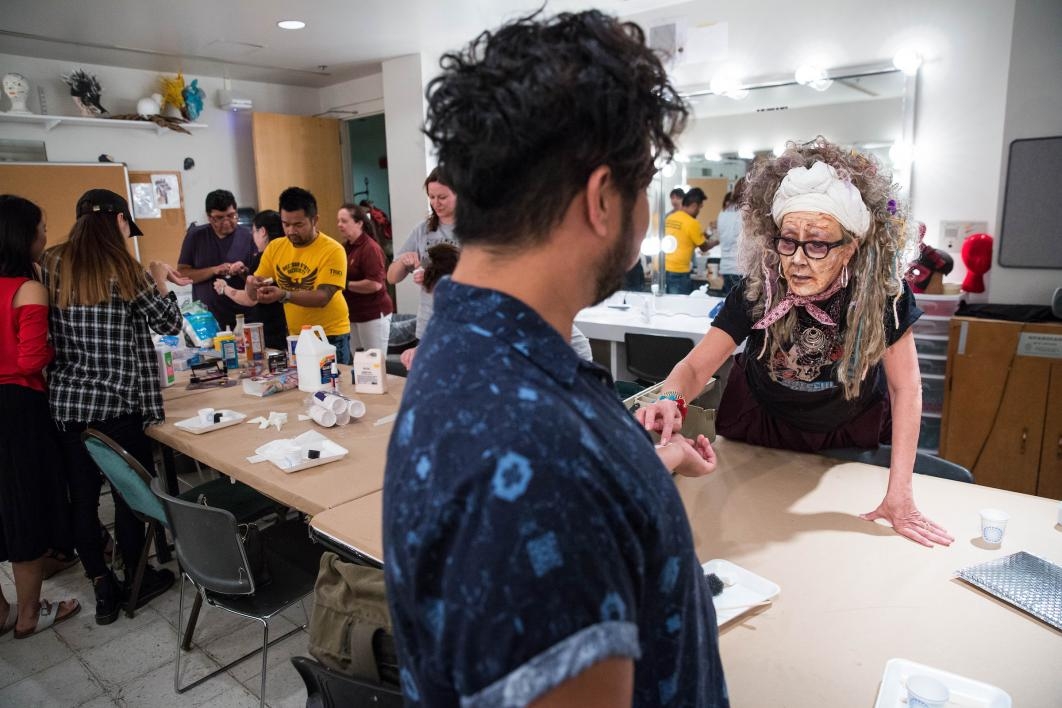 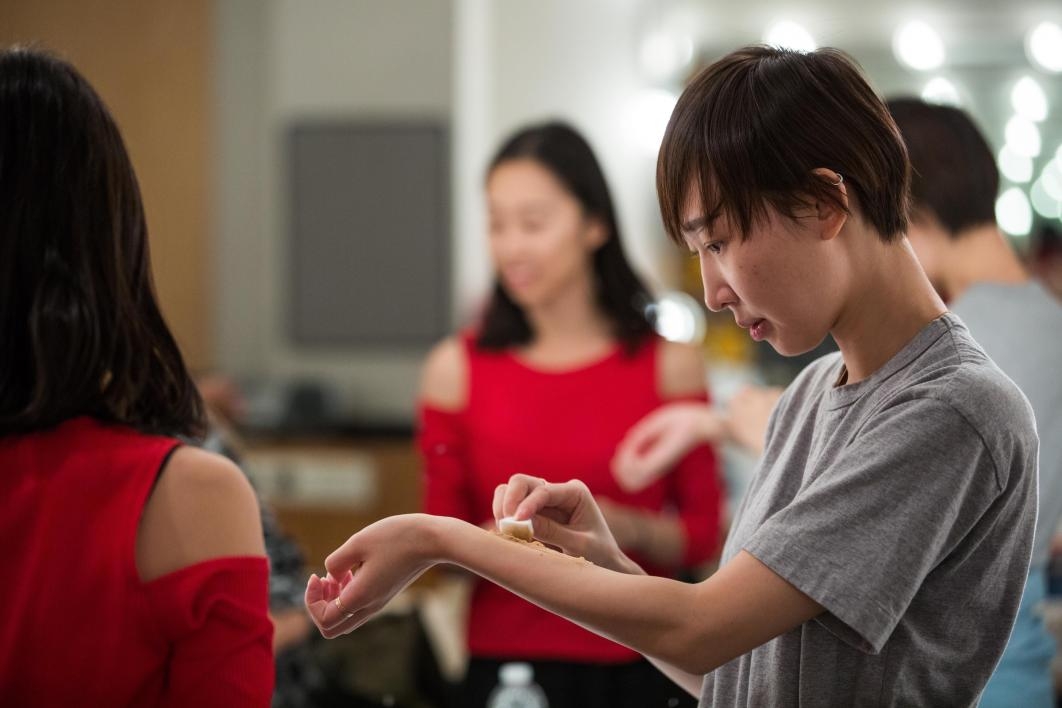 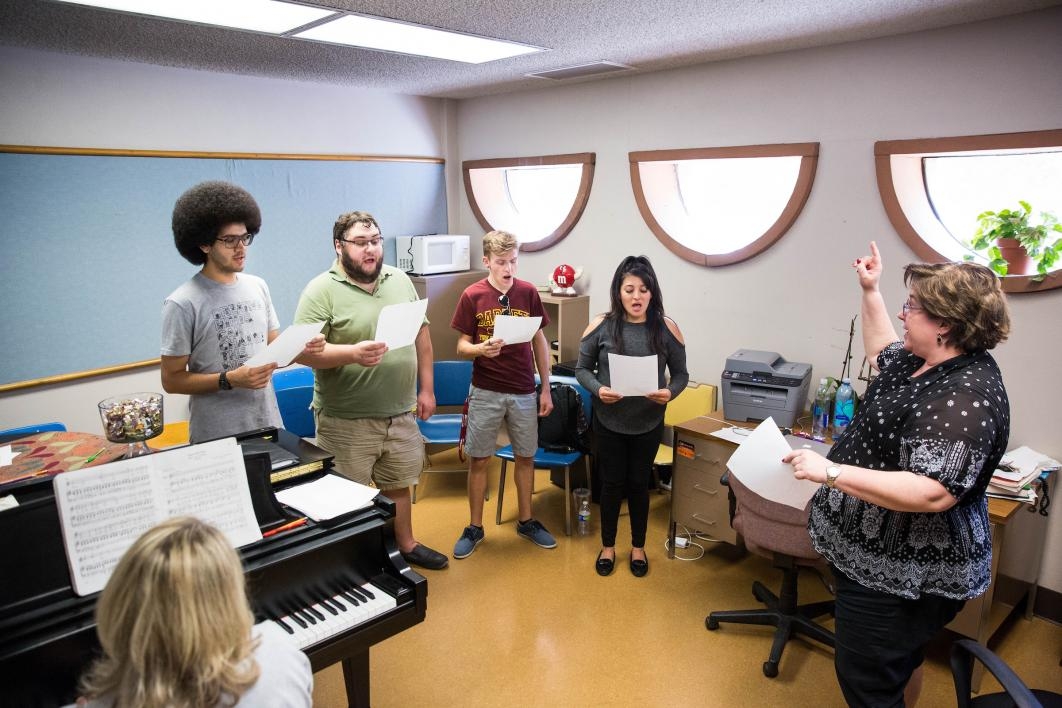 Students learn to balance a pole as they utilize space within a room with Associate Professor Jeff McMahon in a workshop called "Acting the Room" during Herberger Institute Day. 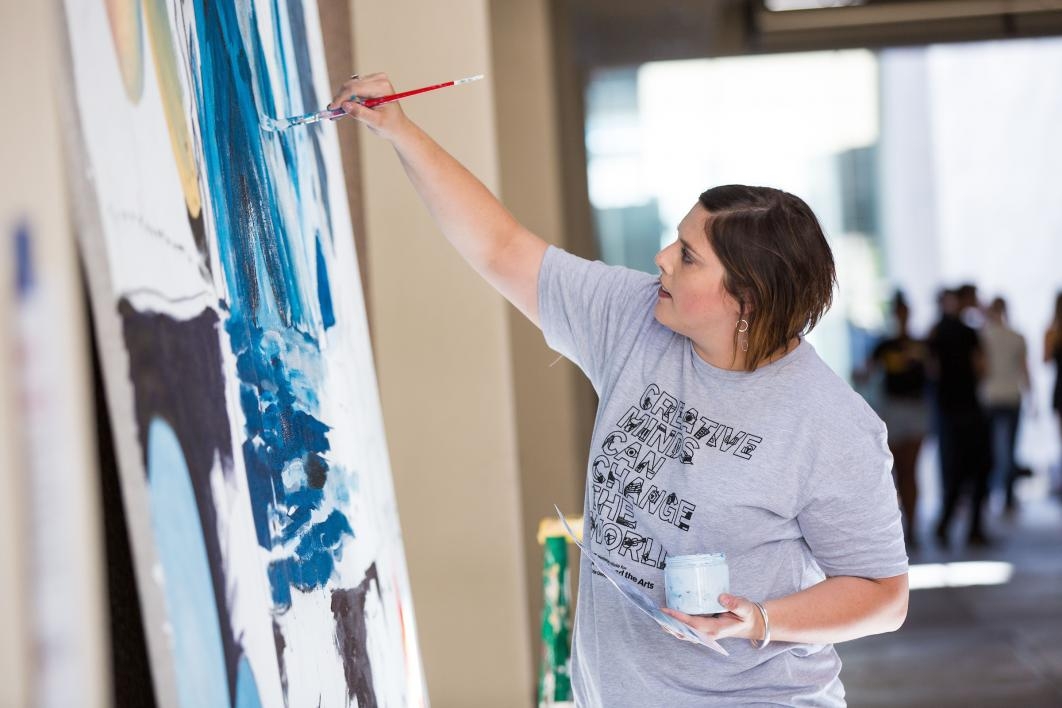 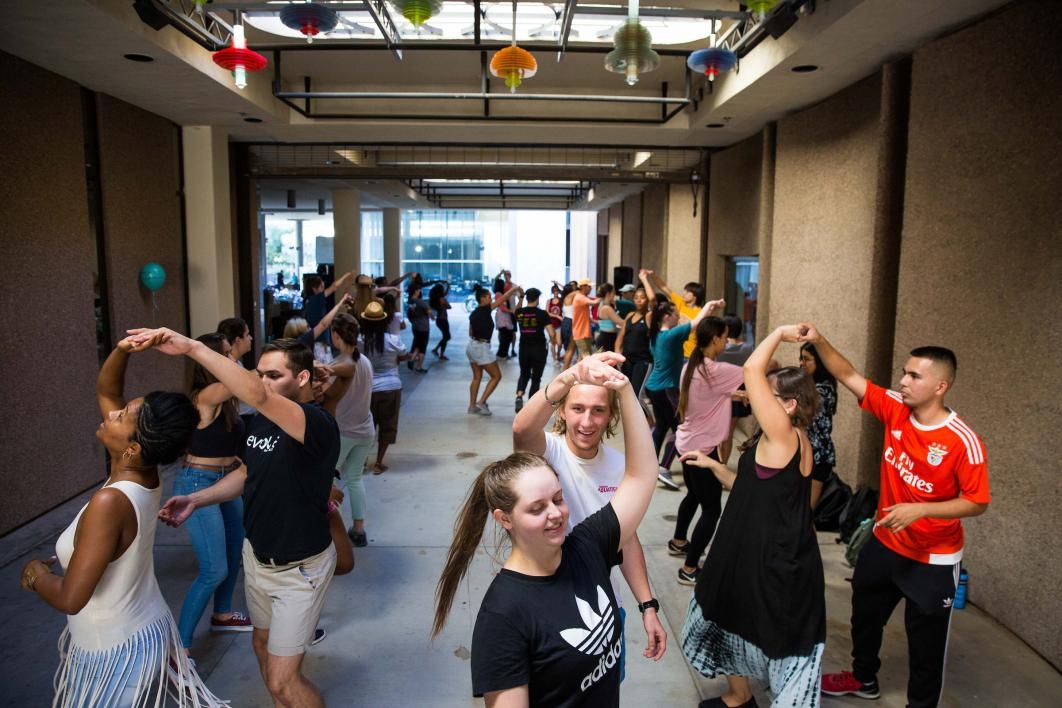 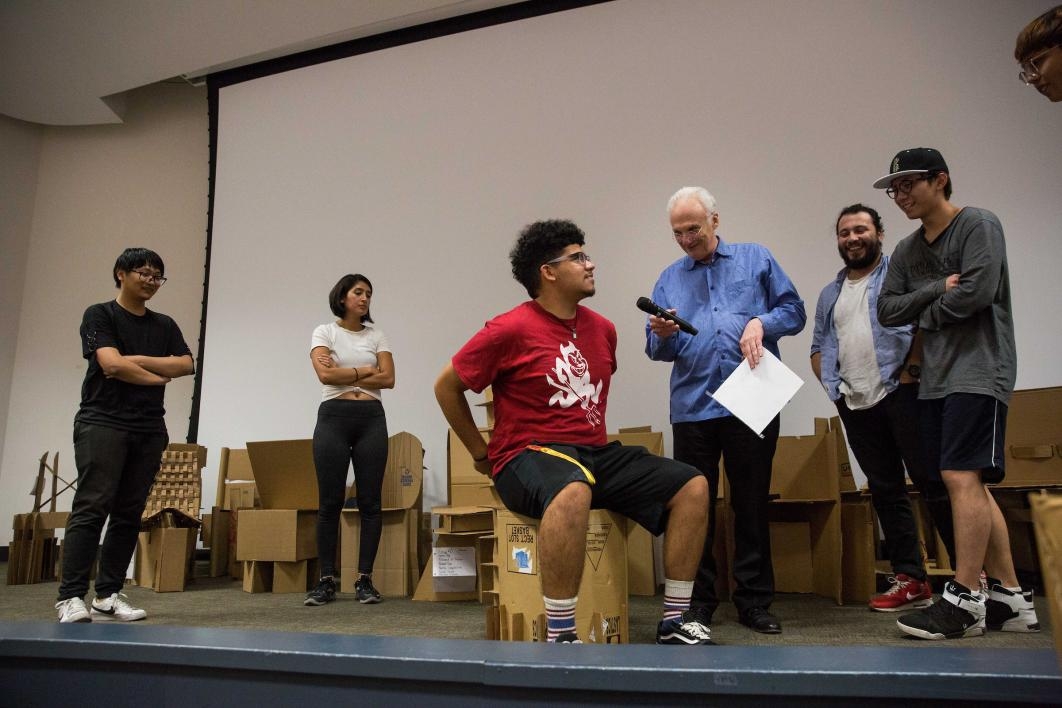 Professor Max Underwood has students test their chair during the "Great Cardboard Chair Challenge," as part of his design course during Herberger Institute Day. The chairs must support a 200-pound person and be built completely from cardboard with no glue or fasteners. 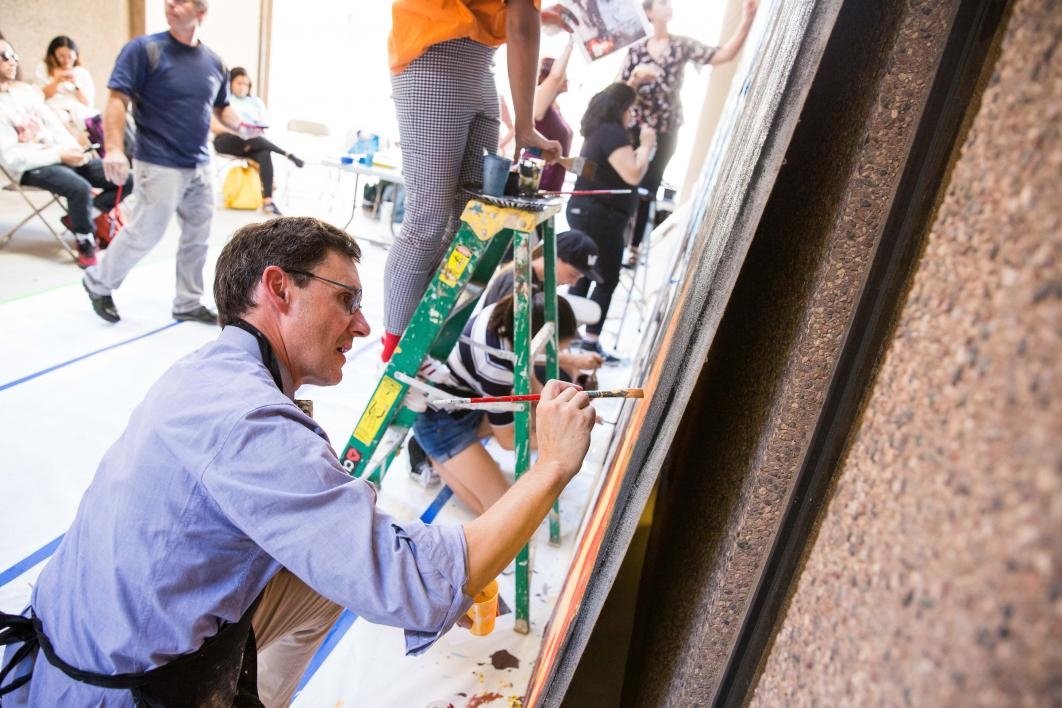 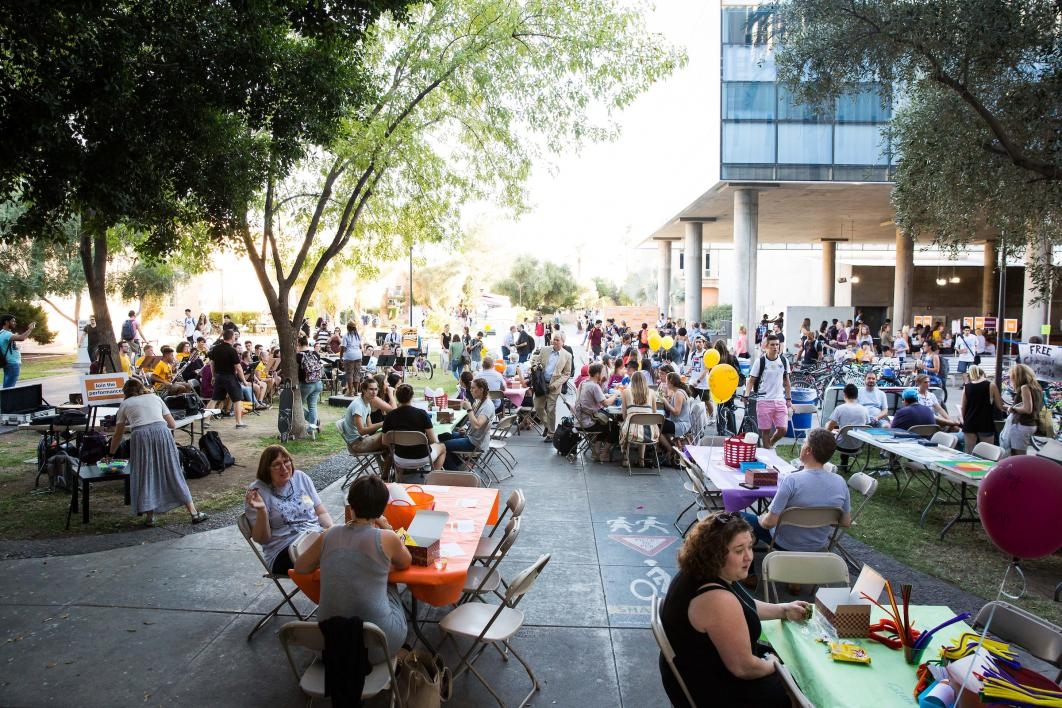 Herberger Institute students, staff and faculty gather for a meal together after the workshops. 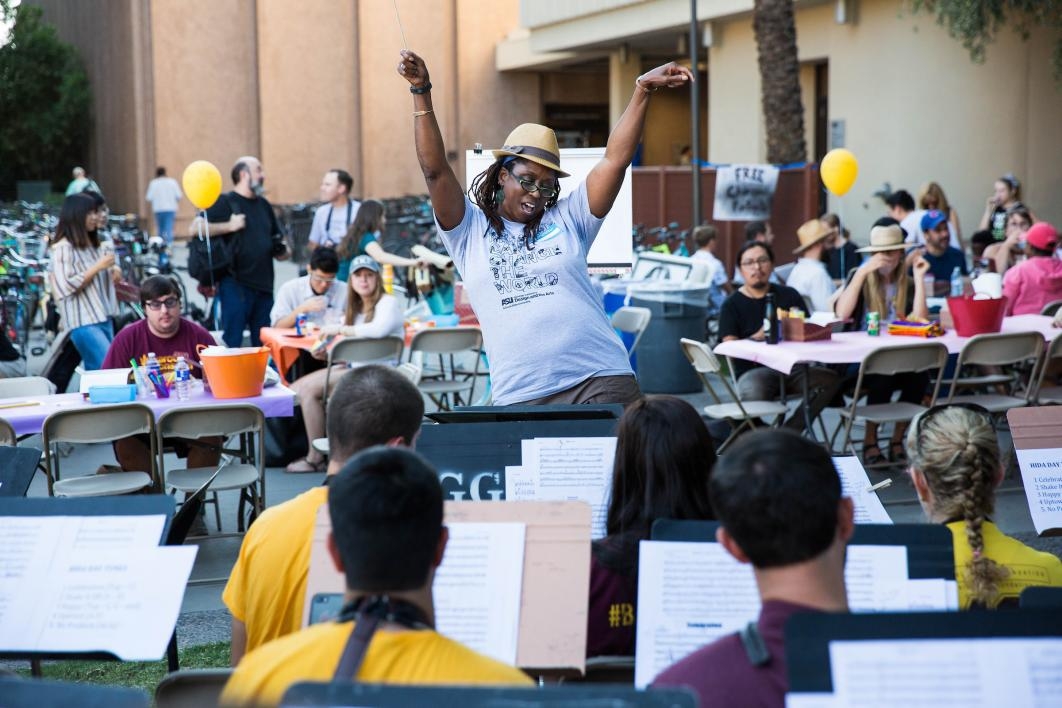 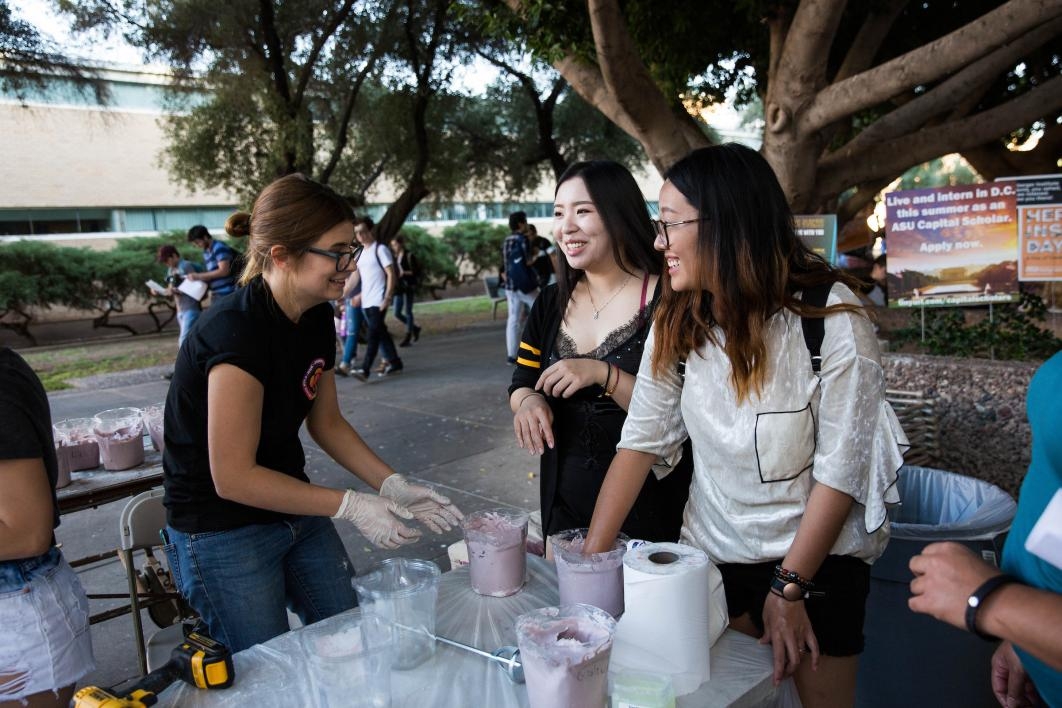 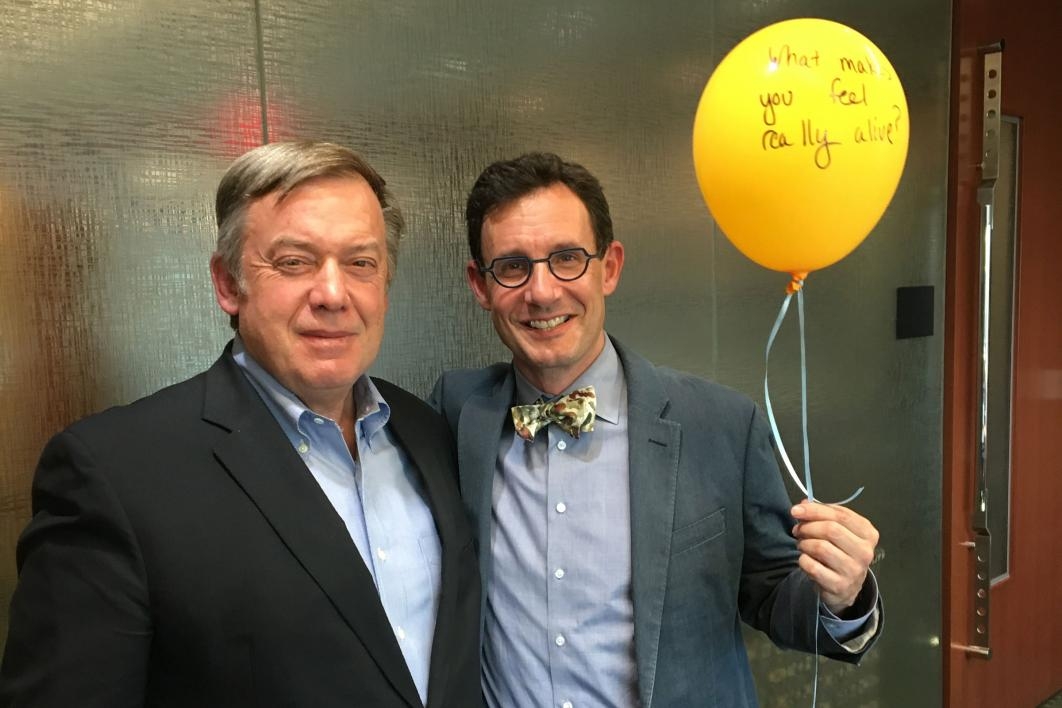 One of the challenges in the “Find Your People” workshop was to pick a balloon with a “conversation starter” on it and take it out into the world. Herberger Institute Dean Steven Tepper, who had a meeting with ASU President Michael Crow afterward the event, took a balloon along. The question on it read, “What makes you feel really alive?” Crow’s answer: “Waking up in the morning.”

During Herberger Institute Day, the dean did some sketching in a fashion class and dropped in on a choir singing a South African song. He spent time painting a “speed mural” with School of Art Associate Professor Mark Pomilio and dozens of other volunteer painters. Tepper took part in an “Open Air Mattress Talk,” where participants “used their bodies and minds to break down boundaries and have an open conversation about consent and sexual-violence prevention on campus.” He also briefly conducted a brass band.

When the workshops concluded, more than 400 people gathered for the Meal on the Mall. They sat at tables covered in bright paper and worked with specially trained graphic recorders to capture, in pictures, a record of what the day meant to them. They ate box lunches and were entertained by pop-up performances, including climate-change plays led by Micha Espinosa, faculty in the School of Film, Dance and Theatre, and lively music from both a jazz ensemble and the brass band, which passers-by were free to conduct themselves.

The brass band, and watching people conduct it, was Gnyanesh Trivedi’s favorite part of the day. Trivedi is a mechanical engineering major doing his master’s degree at ASU, but he has taken introduction to acting at ASU.

“That’s why I’m here at Herberger (Institute) Day,” he said. “I was a part of the plays that they put up for climate change. I played a penguin, passing judgment on humans.”

“I love theater,” Trivedi continued. “I did a little bit of theater back in my home country, which is India. And I wanted to come here and explore what theater in the United States is like. And then being an engineer it gets really painful sometimes. The stress can be overpowering, but with my acting class I really get to explore another dimension of my personality.”

Trivedi echoed those who want to see the Herberger Institute Day become a regular tradition.

So what are the chances of Herberger Institute Day happening again?

“It really depends on popular demand,” Tepper said as things drew to a close. “It was worth it, but it was a lot of work. Seeing everybody smiling and singing together and playing and creating and having a good time and realizing we’re this big creative family, or even this big creative city within ASU — it’s thrilling for me as dean. But I want to make sure everybody wants to do this again, and if they do we’re definitely all behind it.”

The bigger challenge, he said, is figuring out how to more forcefully integrate curriculum.

“We have to give our students more opportunity to explore across the Herberger Institute, we’ve got to develop more research and creative teams that are building out multidisciplinary projects together. We’ve got to build our Design and Arts Corps, which is going to bring students from different disciplines together to activate and engage with community partners.

“(Herberger Institute Day) is kind of a symbol of what’s possible. It’s a way to celebrate together. But we really have to put our shoulder to the wheel and figure out how we live every day in our curriculum and in the way we work and teach and interact and research, how we live that collaboratively and across all disciplines and schools. So we have a lot more work to do. But I think this is a great first step.”

In 1980, the city of Tucson and the Arizona Department of Water Resources began an ambitious plan to replenish Tucson’s depleted aquifers. By 2004, the city had implemented water conservation practices among its residents and had begun using Colorado River water to recharge its aquifers. By 2015, Tucson was able to show a significant increase in water storage in the city’s aquifers, a vital el... 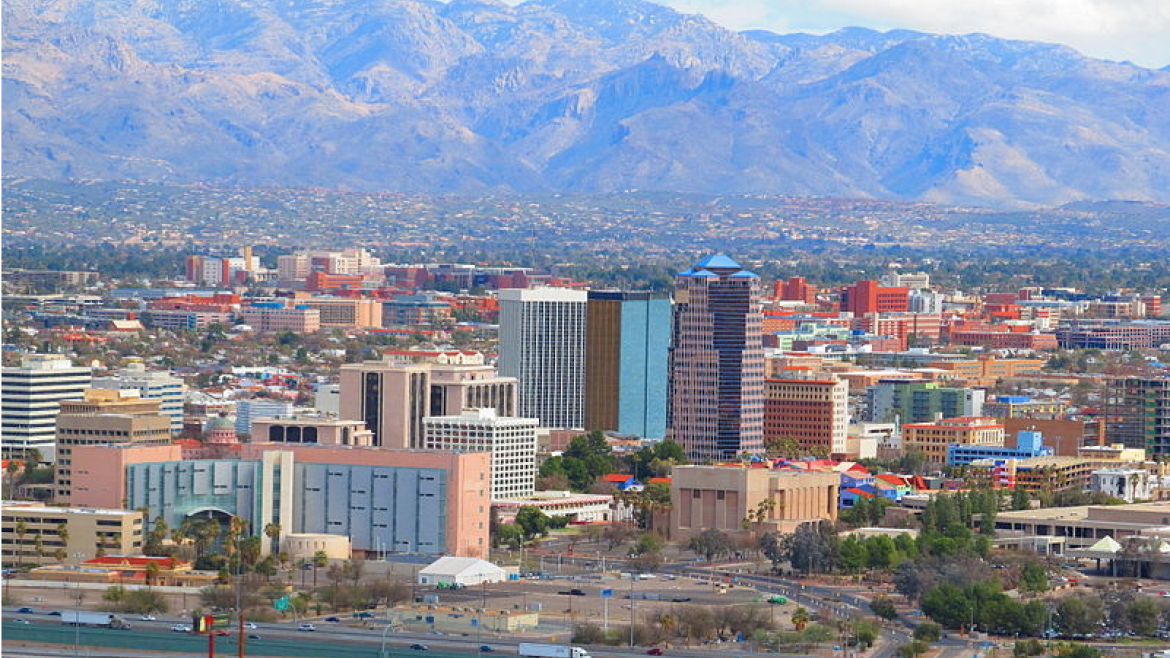 Satellite data provide closer look at water storage success both above, below ground

In 1980, the city of Tucson and the Arizona Department of Water Resources began an ambitious plan to replenish Tucson’s depleted aquifers. By 2004, the city had implemented water conservation practices among its residents and had begun using Colorado River water to recharge its aquifers. By 2015, Tucson was able to show a significant increase in water storage in the city’s aquifers, a vital element to this thriving city.

Arizona State University geophysicists Megan Miller and Manoochehr Shirzaei, of the School of Earth and Space Exploration, along with Donald Argus of the Jet Propulsion Laboratory at the California Institute of Technology, were intrigued by Tucson’s water storage success and wanted to take a closer look at what was happening both above and below ground.

“We chose the Tucson area because the groundwater management and conservation challenges there offer lessons for many other cities in the Southwest with similar predicaments,” Miller said. “Tucson was also of special interest because, contrary to what would be expected, its aquifer levels did not dramatically decrease during a period of drought.”

To study the area, the researchers used satellite radar data from the Envisat and RADARSAT-2 satellites from 2004 to 2015. Using this data, the researchers tracked land subsidence and measured how much the land fell, rose or stayed the same over time. They then compared the satellite-derived subsidence data to measurements from global positioning systems, land thickness studies and well levels.

The results of their study, recently published in the Journal of Geophysical Research: Solid Earth, showed that following Tucson’s water conservation and management efforts, not only did the land subside less, there was also a decrease in the loss of storage volume in the aquifer. 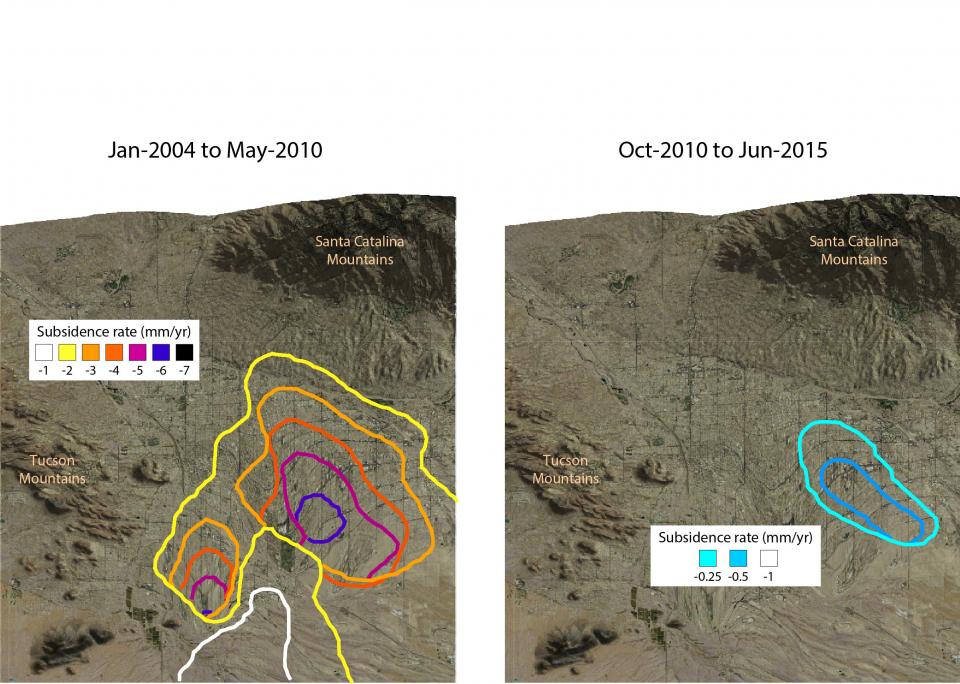 Left image: Vertical land motion (mm/yr) in the Tucson metropolitan area observed using Envisat InSAR 2004–2010. This image depicts, through satellite data, how fast the land in the area of study was moving downward from 2004-2010, during which the Tucson area aquifer experienced storage volume loss. Right image: Vertical land motion (mm/yr) observed using RADARSAT-2InSAR 2010–2015. This image depicts how fast the land was moving downward during a significantly slower period when volume loss had been minimized as a result of groundwater management and conservation efforts. Credit: Megan Miller/Manoochehr Shirzaei

So far, artificial recharge efforts in Tucson have banked the equivalent of at least 45 years of groundwater withdrawals needed for residents of the area. When combined with impressive conservation efforts, Tucson has been able to minimize land subsidence, halt the depletion of the aquifer storage, and store water for the future.

The researchers hope that understanding how Tucson succeeded in storing water for the future may help other Southwestern cities.

“Knowing how the aquifer system responds can help public-policy makers decide what to do in the case of a water shortage,” Miller said. “In particular, knowledge of an aquifer’s elastic properties would allow authorities to determine how much fresh water can be extracted without causing permanent damage to the aquifer system.”