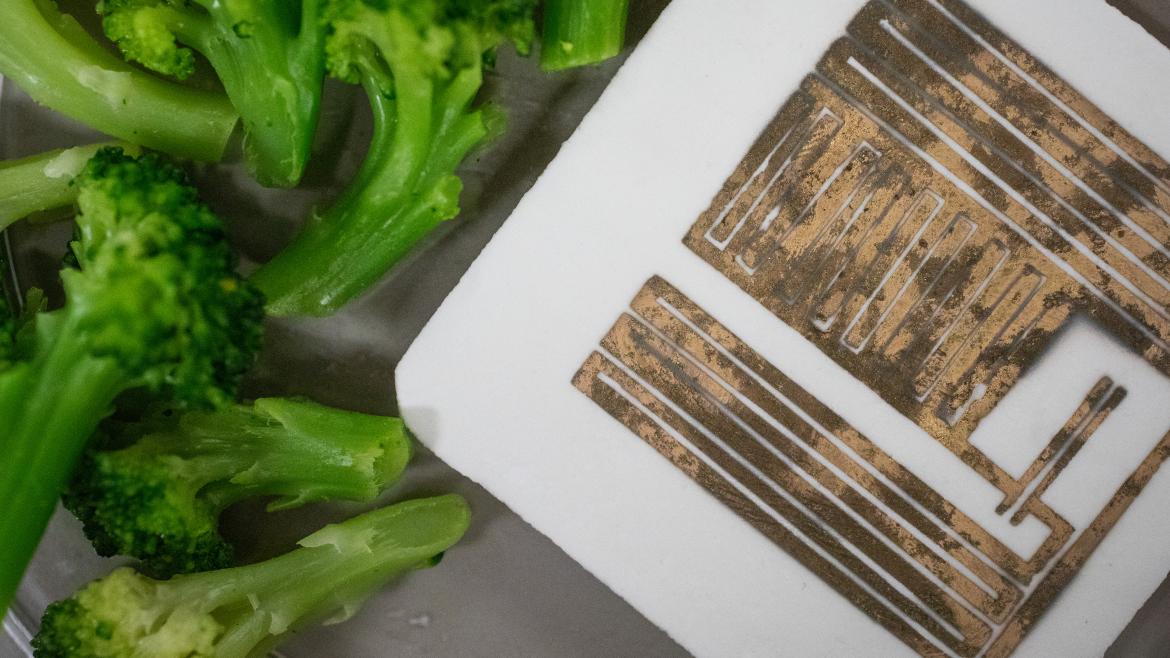 Eat two and call the doctor in the morning

Tempe campus
Edible medical devices the next thing in electronics. But which foods work best?
October 12, 2017

ASU professor makes a jump in the quest for edible electronics, cites their potential to revolutionize biomedical technologies

Electronics can be wearable and implantable. Soon they’ll be ingestible.

An Arizona State University professor has created a tool kit of food-based electronics that will be used to create edible medical devices.

Food as an electrical component is just beginning to be studied. Now, after exhaustive research, Jiang and his team have created a list of foods that conduct or insulate electricity and have measured to what extent they carry out those roles.

Foods with lots of salt (like butter) and water (like fresh meat and vegetables) conduct electricity well. Carbonized cotton candy and flour can be used to build resistors. Vegetables with lots of cellulose, like broccoli and cabbage, can generate an electric charge. The researchers used the Food Guide Pyramid.

“You have to do something no one has done in the past,” said Jiang, a professor of mechanical engineering in the School for Engineering of Matter, Transport and EnergyThe school is part of the Ira A. Fulton Schools of Engineering at ASU..

The tool kit describes the properties of food-based electronic materials, how to create devices like an edible sensor and microphone, basic components and devices with integrated sensing and wireless signal transmission.

“This really does open the door for us for a much broader spectrum,” Jiang said. 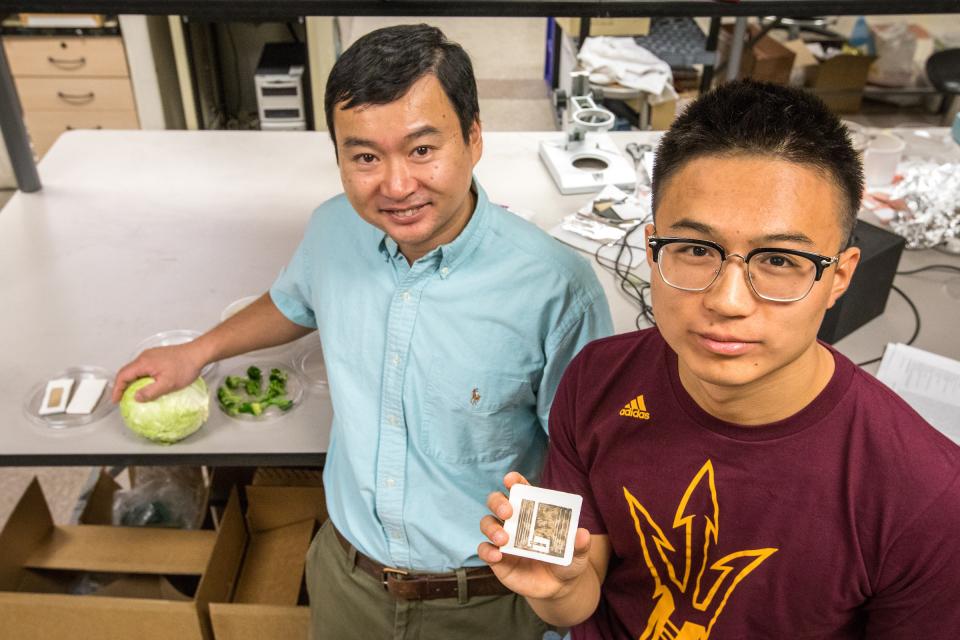 ASU Professor Hanqing Jiang and doctoral student Haokai Yang are advancing their group's research on edible supercapacitors that will one day be digested and used for non-evasive diagnostics and treatments for gastro-intestinal issues. Yang holds a large pH sensor, which will soon be made much smaller. Photo by Charlie Leight/ASU Now

Jiang and his team are now working on the next step: a functional device. They have two in mind: one that will study bacteria in the gastrointestinal tract and another bowel implant that is dissolvable.

The devices they have built work in proof of concept. Bowel sounds from a 70-year-old man with abdominal pain were fed to a loudspeaker and recorded with the edible microphone. It successfully reproduced the original testing sound.

Jiang envisions doctors doing real-time monitoring of the gastrointestinal tract. Edible electronics have the potential to revolutionize biomedical technologies and devices, he believes.

Research does have one painless aspect: “We can just eat it afterwards,” said Haokai Yang, a lab member and doctoral candidate studying mechanical engineering.

Two former senators, a liberal Democrat and a conservative Republican, had a discussion at Arizona State University on Thursday about how civic discourse has disintegrated and how it can be elevated.And they agreed on almost every point.“What has been prioritized is defeating the other side, and there ought to be a larger purpose,” said Jon Kyl, a Republican who represented Arizona in the U.S.... 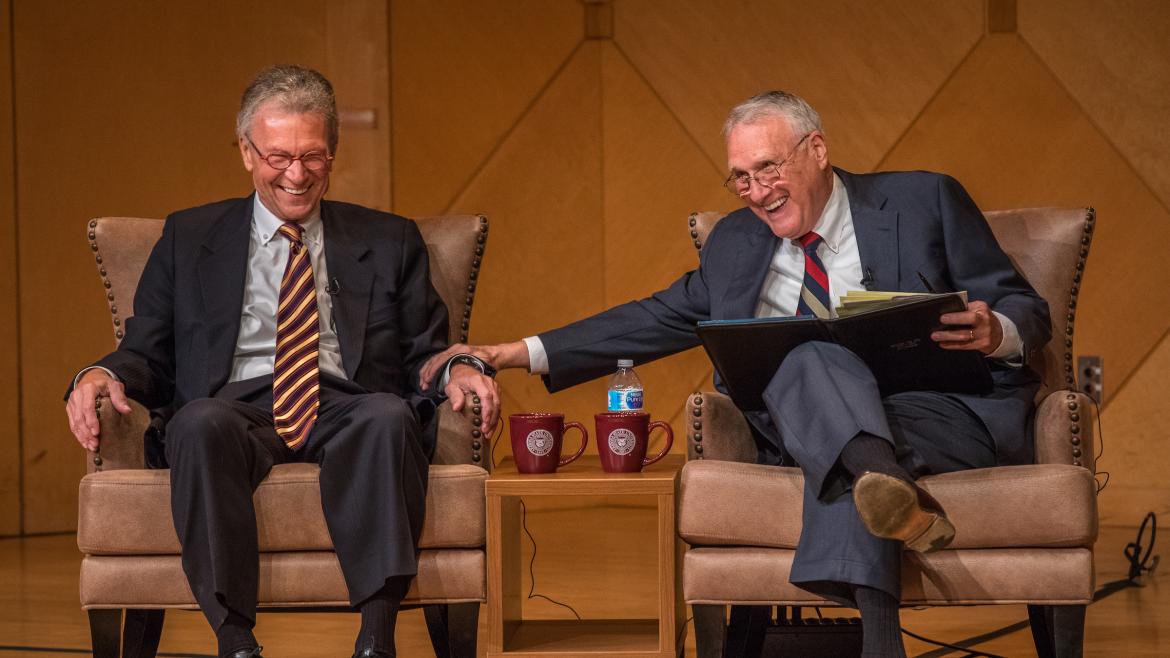 Two former senators, a liberal Democrat and a conservative Republican, had a discussion at Arizona State University on Thursday about how civic discourse has disintegrated and how it can be elevated.

And they agreed on almost every point.

“What has been prioritized is defeating the other side, and there ought to be a larger purpose,” said Jon Kyl, a Republican who represented Arizona in the U.S. Senate.

Kyl and former Sen. Tom Daschle, a Democrat from South Dakota, spoke at a talk titled “Disagreement and Civil Dialogue on American Politics and Civic Culture,” sponsoredThe event was co-sponsored by the Walter Cronkite School of Journalism and Mass Communication and the Sandra Day O’Connor College of Law. by ASU’s School of Civic and Economic Thought and Leadership on the Tempe campus.

At Thursday’s talk, they outlined why they think America has become so politically polarized and why it’s become difficult to have productive, thoughtful political discussions.

Daschle said Americans have “global engagement fatigue” from many years of war in Afghanistan and Iraq and the perception that trade has caused the loss of millions of jobs in the U.S. He also cited income inequality and stagnation, noting that in 1950 it took 45 hours a month of work to pay the average housing cost and now it takes 101 hours.

“That sense that there are those at the top that are benefitting more than others creates tremendous frustration and animosity,” he said.

Kyl agreed with those points and added his reasons — a cultural divide and partisan media.

“We no longer have the same basis of values or same beliefs in key, fundamental points that used to unite us,” he said.

“And it’s exacerbated by those who amplify. There are talk radio and TV hosts on famous TV channels who constantly go to the side of demagoguery and emotional rants rather than trying to seek out common ground,” Kyl said, noting that it happens with both political sides. “They appeal to the worst of our cultural divide.

“I can’t emphasize enough how toxic that has made Washington. You have them telling your constituents that if you don’t do A, B or C, ‘We’ll run someone against him.’ ”

The two senators agreed that they can now speak out because they’re “no longer in the game,” but they discussed ways that Congress could overcome its inefficient dysfunction.

“The airplane has changed the way Congress functions,” Daschle said. “It’s regrettable to me that senators and congressmen leave on Thursday afternoons and come back on Tuesday mornings and they try to run the country on Wednesdays.”

And both men said that senators don’t socialize and get to know each other as people like in years past.

“If you don’t know someone, you don’t compromise with them,” Daschle said, adding that there should be more joint caucuses in which both parties meet. He said that joint caucuses helped members of Congress come together after 9/11.

Both former politicians noted that the stakes for dysfunction in the federal government are high. Kyl said it affects the ability to solve problems at every level.

“Instead of viewing yourself as a citizen of Tempe looking at a zoning case, you divide into different camps and motives are suspect,” he said.

Kyl said that rather than trying to make reforms at the federal level, which can have unintended consequences, it’s up to citizens to vote, be engaged and advocate for civic education.

“What are the key things in the Declaration of Independence that every American should know? Because that’s what we’re fighting for,” he said.

“We should teach kids not to agree with each other but how to analyze a problem.”

And our leaders should work on negotiation and compromise, Kyl said.

“I learned that the best way to legislate nationally is to give the other side some percentage of the victory, and try to get your percentage as well.

“But it’s hard to do when people say ‘You have to be pure, and if you’re not we’ll replace you with someone who is.’ It takes courage.”

The next School of Civic and Economic Thought and Leadership event will be a talk on Nov. 9 by social psychologist and author Jonathan Haidt titled, “America’s Escalating Outrage: Why Is It Happening, What Does It Do to Colleges, and How Can We Reverse It?” For details, go here.