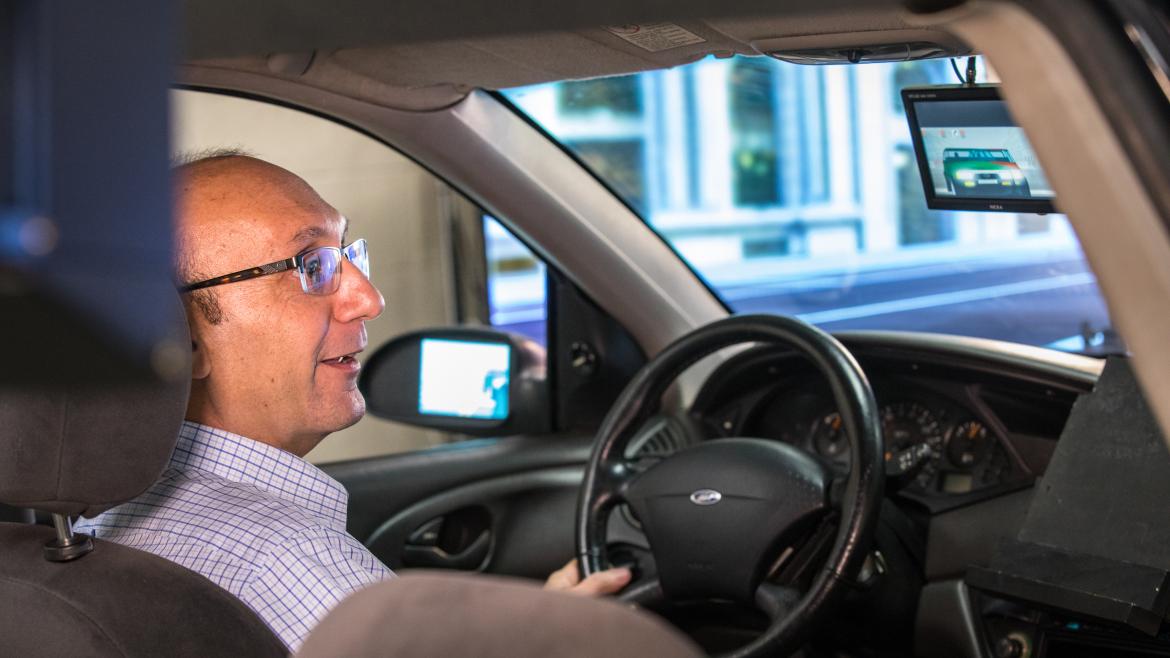 Getting out of your dreams and into your car

Polytechnic campus
Car brain would monitor your driving and intervene as needed in a smart way.
October 2, 2017

In 2015, Ashraf Gaffar’s daughter was walking across the street at a stop sign when she was hit by a driver who was texting.

“He hit her pretty badly,” said the Arizona State University engineering professor (pictured above). “She stayed in the hospital for a long time, and she had several surgeries to her face. It made me wonder.”

At that point, Gaffar had been working on developing an artificial intelligence car brain for three years.

“We better do it now,” he said. “We don’t want to wait until autonomous vehicles are all over the street in 10, 20 years. We want to start helping our kids on the street tomorrow.”

Gaffar is developing an artificial intelligence system for cars, which will augment autonomous cars (when they arrive) or act as a virtual mom sitting beside you as you drive.

“A vehicle that will help you drive better, drive safer and avoid accidents to a certain degree” is how the assistant professor in the SchoolThe School of Computing, Informatics and Decision Systems Engineering is part of ASU's Ira A. Fulton Schools of Engineering. of Computing, Informatics and Decision Systems Engineering described his system. “It will monitor your way of driving, and it will intervene as needed in an intelligent way.”

Gaffar’s system will learn how you drive, then learn on its own.

“It will come pre-loaded with what is good driving and what is not,” he said. “Then the first few weeks it will learn your style of driving and adjust to it. Then it will be able to detect any anomalies and analyze them.”

Over time it will be able to help. You’re still going to be driving the car, but you’ll get some assistance when you need it. If you start showing fatigue or suddenly are unable to drive because of, for example, a heart attack, the car will intervene.

Intervention can range from a warning to pay attention to the car taking over and pulling itself over to the side of the road.

“You can see it as having your mom next to you,” Gaffar said.

Don’t mistake him as a hater of autonomous vehicles (“They really are the future,” he said), but they come with challenges. It’s no coincidence they’re being tested in sunny southern Arizona where it rarely rains and not in Canadian snow or New England fog.

Or amongst a combination of hazards — what Gaffar calls “cumulative adverse conditions” — say, a night where it’s raining on a busy road with no median where headlights are coming right into your eyes.

“When we look at conditions like these, we realize we are not getting rid of the driver anytime soon,” he said.

Dealing with everything found on roads from sea to shining sea means excruciating algorithmic programming that accounts for everything. If this happens, do this. If that happens, do that. If there’s a squirrel, a log, an alligator, a soccer ball in the road, do that. That’s why Gaffar favors artificial intelligence over software.

“There are areas where we have to recognize all of them in advance and put them in a very long and complex software, or we use artificial intelligence,” he said. “It’s easy to program. It simulates human intelligence and, more importantly, it has learning ability. When we drive, we get experience over time. Our intelligent co-driver works the same way. ... This is one of the areas where we really believe an intelligent car is not a replacement of an autonomous vehicle, but they can co-exist.”

"While the entire family suffered, and everyone was strongly affected by the accident, she did not just survive; she excelled beyond herself, despite extensive hospitalization, therapy and lost time,” he said. “She is now a successful second-year medical student in one of the best universities in North America. It wouldn't be too hard to guess what she wants to specialize in."

Top photo: Assistant Professor Ashraf Gaffar takes a spin in an automotive simulator on the Polytechnic campus on Sept. 27. He and his doctoral student are writing artificial-intelligence programming for cars that will learn the driver's driving style. A few weeks later, the programming will enable the car to be safer by detecting if the driver is fatigued or distracted. Photo by Charlie Leight/ASU Now

Buildings account for 46 percent of all carbon emissions. They also account for 75 percent of all electrical use.“This is breathtakingly important,” Denis Hayes told an audience at Arizona State University on Monday night.Hayes, coordinator for the first Earth Day and president and CEO of the Bullitt Foundation, a nonprofit devoted to protecting and restoring the environment of the Pacific Nor... 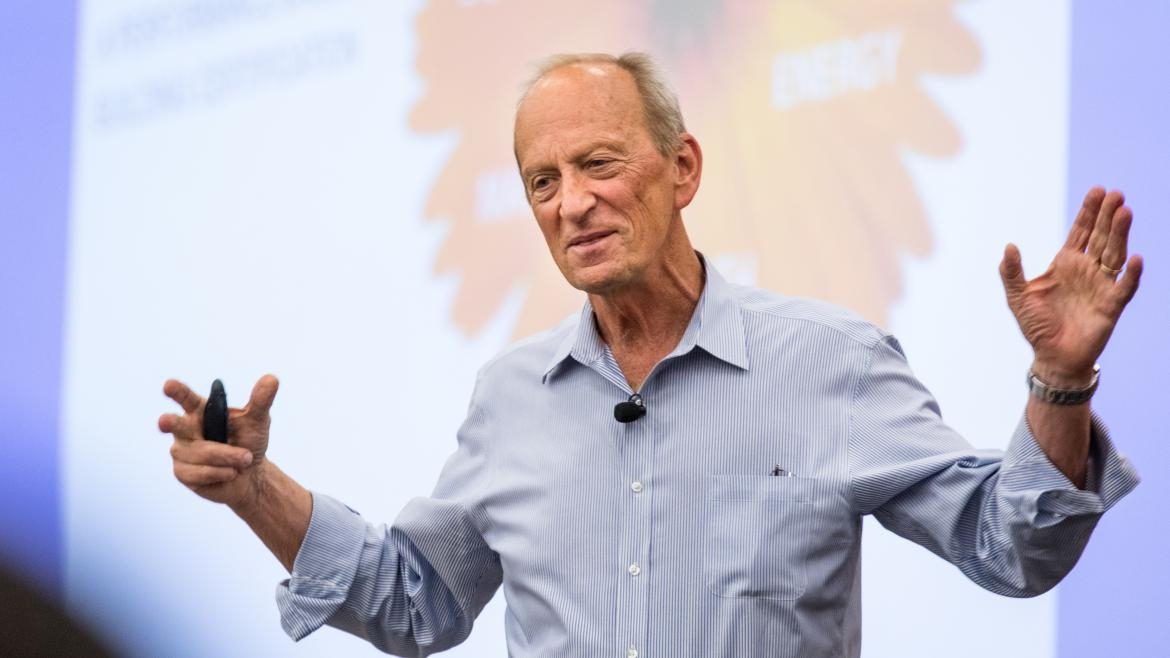 Denis Hayes, coordinator of the 1st Earth Day, speaks with ASU audience about Living Buildings and what universities might do

“This is breathtakingly important,” Denis Hayes told an audience at Arizona State University on Monday night.

Hayes, coordinator for the first Earth Day and president and CEO of the Bullitt Foundation, a nonprofit devoted to protecting and restoring the environment of the Pacific Northwest, discussed working in what has been described as the world’s greenest building.

The Bullitt Center in Seattle has met what is called the Living Building Challenge. A combination of a building standard and a philosophy, it’s similar to LEED (Leadership in Energy and Environmental Design) certification, but performance-based.

LEED buildings can be “heroically disappointing,” Hayes said, citing a new Seattle City Hall that is LEED-certified but has more of an environmental impact than the old building it replaced.

A Living Building must produce 105 percent of the energy it uses. It must capture its own water. It cannot have been built on a place where nothing has been built before. And it must not use materials from a banned “Red List” that are hazardous to human health or the environment.

The Bullitt Center has produced 60 percent more energy than it uses during the past three years.

“To which the basic question arises: What’s up, Phoenix?” Hayes said. “In Seattle we don’t even know what the sun looks like.”

He called the building the most comfortable office building in Seattle. Windows crack themselves automatically around 9 p.m., letting cool night air to circulate. At 7 a.m., they automatically close.

The water goal was to operate with as much impact as a Douglas fir forest on the same site. A study revealed it uses slightly less water. Composting toilets use a half cup of water per flush. A traditional low-flow toilet uses 1.5 gallons per flush.

All of this sounds expensive. The six-story building cost $355 per square foot, less than the median cost of construction of Class A office space in Seattle. One way this was achieved was to have no marble, no granite countertops, no expensive art and no parking garage. (Workers bike, take public transit or Lyft, or they park a block away.)

The idea in bringing Hayes to speak on campus was to spark ideas about possibilities, said Mick Dalrymple, directorDalrymple is also a senior sustainability scientist at the Julie Ann Wrigley Global Institute of Sustainability and an instructor in the School of Sustainability. of University Sustainability Practices at ASU.

“Most people don’t know what a living building is, so I wanted to elevate the conversation here and get people to think of a new idea,” he said. “I don’t expect that ASU is going to have some Living Building Challenge policy. It’s really made for design for the frontier buildings, people who really want to push the envelope.” 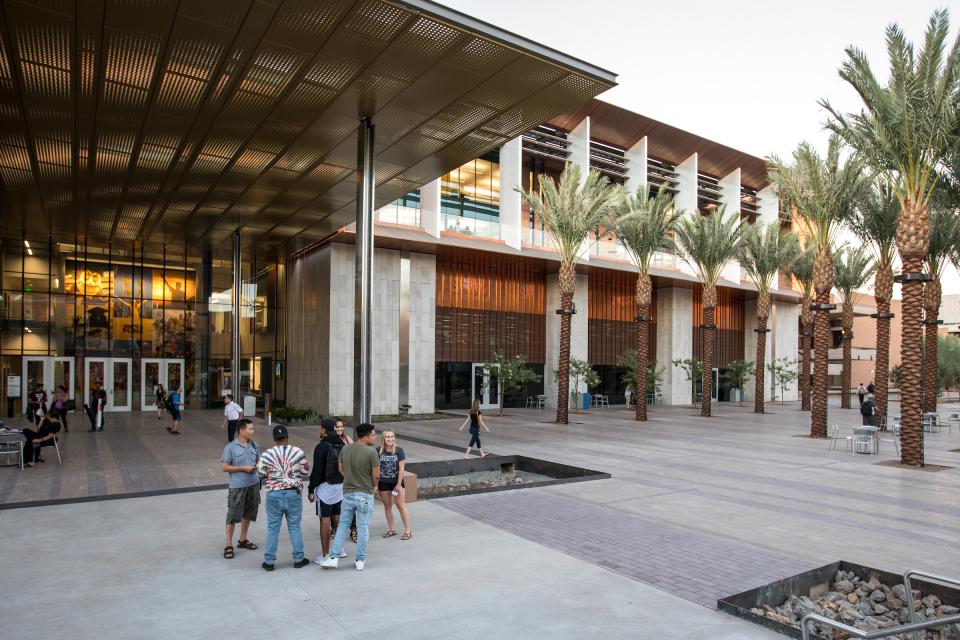 The new Student Pavilion (and the newly renovated Orange Mall in front of it) hosted Denis Hayes on Monday evening. The Student Pavilion was designed to be ASU's first Net Zero Energy building. Photo by Charlie Leight/ASU Now

Dalrymple and his University Sustainability Practices team help the university reach its ambitious sustainability goals. ASU owns the largest number of LEED-certified buildings in Arizona and built state's first-ever LEED Platinum building, the Biodesign Building B on the Tempe campus.

A Living Building earns certification after one year, during which all metrics are measured.

“It’s a pretty tough standard,” Dalrymple said. “It’s tougher than LEED. It’s not based on design. It’s based on actual performance.”

The water standard for a Living Building would be very tough to achieve in dry, sunny Arizona. But incorporating other standards is possible, Dalrymple said.

“There are a good number of people within ASU looking into the Living Building Challenge to see how we might be able to do a Living Building or at least is inspired by or aspires to the Living Building Challenge,” he said. “I am hoping we get one or two of them here; specifically I’m hoping that we go for it on ISTB7, and maybe on Waterworks, although on both of them it’s an extremely challenging standard to meet. I don’t know if it’s possible or not, but I want us to explore it and see how far we get. It’s really kind of an aspirational thing.”

Hayes cited the 50th anniversary of Earth Day approaching in 2020. A movement like that had to have incredible tailwinds, he said.

“And that begins at universities,” he said.