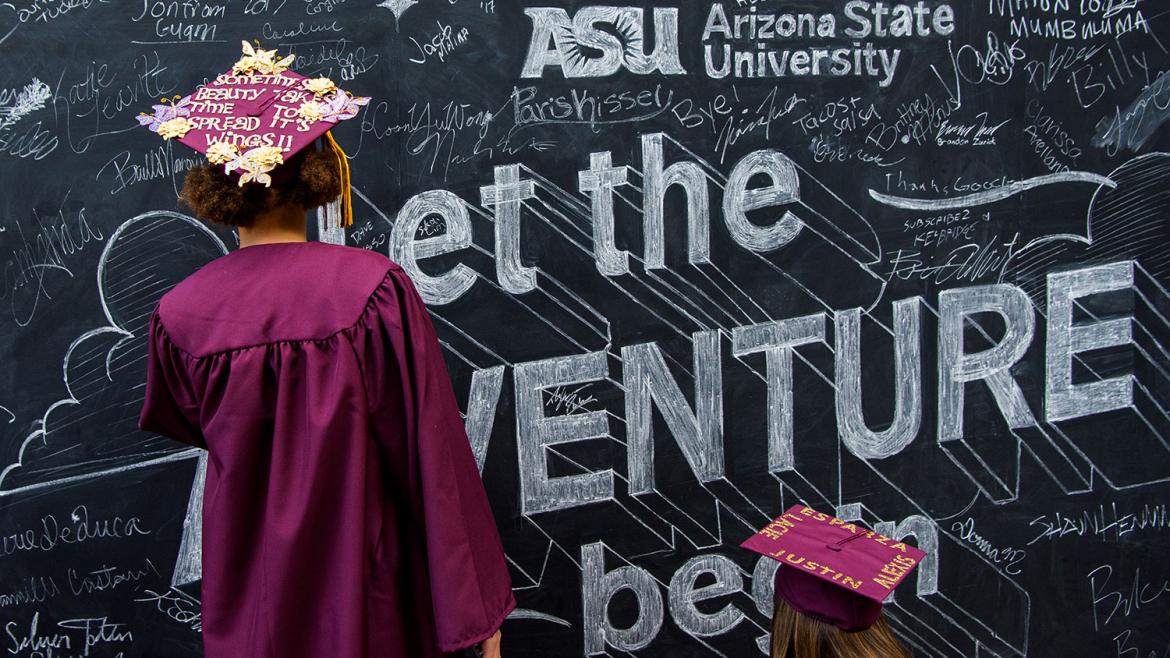 These figures represent significant progress toward the alliance’s goal of graduating an additional 68,000 undergraduates — at least half of whom are low-income — by 2025. Currently, about 50 percent of ASU’s in-state undergraduate students are from low-income families.

The increased degree attainment sets the UIA firmly on the path to exceed its original goals, predicting an additional 94,000 graduates by 2025.

As it stands today, the United States is 3 million graduates short of what is needed to fill the 63 percent of jobs in 2018 that will require a postsecondary education. By 2025, that gap is predicted to grow to 16 million. The graduate deficit is particularly acute among low-income students, raising serious concerns about the nation’s future prosperity and the economic mobility of millions of Americans.

“The future economic competitiveness of the United States depends on higher education’s ability to innovate together in order to improve learning and outcomes at scale,” said Michael M. Crow, chair of the UIA and president of ASU. “Our progress in creating opportunity for a growing population of low-income and underserved students bodes well for the role of the UIA and other institutions to expand and diversify the nation’s talent pool and workforce. That’s good for everyone. ”

In just three years, member institutions have implemented and scaled numerous successful initiatives that address student retention and success, many of which had their start at ASU. The success of ASU’s eAdvisor system, for example, inspired participating universities to implement similar solutions at their colleges. This nationally recognized innovation has helped improve freshman retention at ASU by 9.5 percent and helped increased six-year graduation by 19.3 percent.

UIA members have developed systems that use predictive analytics and academic advising to identify and intervene with students at risk of dropping out of college. Universities have also created innovation fellowships to build internal capacity at UIA universities and scale effective programming, in order to drive student success.

“We believe the progress we’re announcing is significant,” said Bridget Burns, executive director of the UIA. “We hope that more universities join us in setting and reporting on ambitious goals so that together we can help unlock the promise of a postsecondary degree for more students.”

The UIA recently announced its latest scaling project to provide students at its member universities with completion grants to ensure that potential graduates aren’t derailed by financial challenges. Preliminary data from the UIA shows that as many as 4,000 Pell-eligible seniors in good academic standing are at risk of being dropped from classes or not allowed to graduate because less than $1,000 is owed to their respective institution. Through funding from the Bill & Melinda Gates Foundation and Great Lakes Higher Education Corporation & Affiliates, UIA members will provide completion grants to students beginning this fall.

“At its core, the UIA will bring the American dream within reach of many more deserving students,” said Michael V. Drake, president of Ohio State University, a founding member institution.

In 2018, the UIA will host a groundbreaking national convening, bringing together campuses from within and beyond the alliance to share strategies that advance student success and transform higher education.

By piloting new programs, sharing insights about their relative costs and effectiveness, and scaling those interventions that are successful, the alliance is catalyzing systemic changes in the higher education system.

Top photo: Some of ASU's newest graduate make their mark on a chalkboard wall set up at the May 2017 Undergraduate Commencement. Photo by Andy DeLisle/ASU

Shortly after NASA's OSIRIS-REx spacecraft flew past Earth at a distance of about 11,000 miles on Sept. 22, an ASU-built spectrometer onboard looked at Earth and detected methane, ozone, carbon dioxide and water vapor. Taken together these gases in our atmosphere set Earth apart from other planets.While hardly a discovery, the findings helped scientists calibrate the ASU-built instrument and show ...

NASA's OSIRIS-REx spacecraft now halfway on the journey to its target, an asteroid named Bennu

Shortly after NASA's OSIRIS-REx spacecraft flew past Earth at a distance of about 11,000 miles on Sept. 22, an ASU-built spectrometer onboard looked at Earth and detected methane, ozone, carbon dioxide and water vapor. Taken together these gases in our atmosphere set Earth apart from other planets.

While hardly a discovery, the findings helped scientists calibrate the ASU-built instrument and show that it is working perfectly after a year in space. 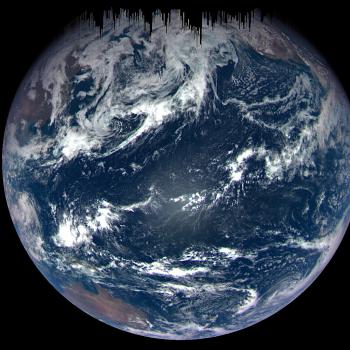 When NASA's OSIRIS-REx spacecraft flew past Earth on Sept. 22, the OSIRIS-REx Camera Suite (OCAMS) looked back at our planet about two hours after closest approach. The Pacific Ocean and clouds filled most of the view; Australia is visible at lower left. At the same time, the ASU-built OSIRIS-REx Thermal Emission Spectrometer (OTES) took a series of spectral measurements so scientists could calibrate the instrument. OCAMS image from NASA/Goddard Space Flight Center/University of Arizona Download Full Image

The OSIRIS-REx spacecraft was launched Sept. 8, 2016, from the Kennedy Space Center in Florida. It is now about halfway on the journey to its target, a primitive carbonaceous asteroid named Bennu. The gravity assist the spacecraft received in the Earth flyby changed its trajectory so that it is now on track to arrive at Bennu in August 2018.

OSIRIS-REx stands for Origins, Spectral Interpretation, Resource Identification, Security – Regolith Explorer. The mission's goals are to return a sample of surface rocks, soil and dust from Bennu, map the asteroid's global properties, document the surface at the sample site down to centimeter scales, characterize its type of asteroid for comparison with meteorites, and measure a subtle effect of sunlight that can alter an asteroid's orbit.

The latter two goals are the main scientific tasks for the ASU-built OSIRIS-REX Thermal Emission Spectrometer, or OTES for short. Philip Christensen, Regents’ Professor of geological sciences in Arizona State University’s School of Earth and Space Exploration, designed the instrument, which was constructed on ASU's Tempe campus.

"OTES is the first complex space instrument to be designed and built entirely at ASU," Christensen said. "We're very proud that this instrument is on its way and operating as designed."

With an orbit that comes inside Earth's orbit, Bennu is the most accessible asteroid rich in organic materials from the early solar system. It reflects only 3 percent of the sunlight falling on it, making it about as dark as charcoal.

When OSIRIS-REx arrives at Bennu, OTES will make a global mineral map of the asteroid, which is roughly spherical and about 1,600 feet (500 meters) across. The map will help mission scientists decide the best place to collect surface samples for eventual return to Earth.

Given its Earth-crossing orbit, Bennu is also a space rock scientists want to keep an eye on. They estimate that it has a 1-in-2,700 chance of hitting Earth in the year 2170.

Which directly leads to OTES' other major task: measuring the temperature and heat emission over Bennu's surface as it spins through its 4.3-hour-long day. This is to help scientists gauge the strength of the Yarkovsky effect on Bennu.

The Yarkovsky effect is a weak but steady thrust produced by sunlight as it falls on a spinning object. The effect comes from the fact that sunlit ground is warmer in the afternoon than the same ground is in the morning, because sunlight has had longer to heat it.

This means that the afternoon side of a rotating object radiates more heat than the morning side, thus producing an extremely small thrust. The effect is negligible for massive objects like planets, but for small bodies like Bennu the effect could shift its orbit.

Using OTES data, OSIRIS-REx will help scientists assess how fast Bennu's orbit is changing and gather information useful for future generations, which may have to take action to deflect the asteroid.

OSIRIS-REx will remain at Bennu until 2021. Then with the sample of rocks and dust safely packed into a sealed re-entry capsule, the spacecraft will fire its engine and go into an orbit to meet with Earth in 2023.

After releasing the sample return capsule, OSIRIS-REx will fly past Earth and continue in its solar orbit. The capsule with the samples will enter the atmosphere behind a heat shield and land under a parachute in Utah.

Christensen said, "This Earth flyby gave us our first real data. Up to now we have just looked at an onboard test target. It's exciting to collect spectral data on a real solar-system body. OTES has performed exactly as we hoped."

"The infrared is great for identifying minerals," Christensen explained. "Rocks and minerals may look similar to the eye, but they show unique spectra when studied in the infrared, where their 'colors' stand out differently." 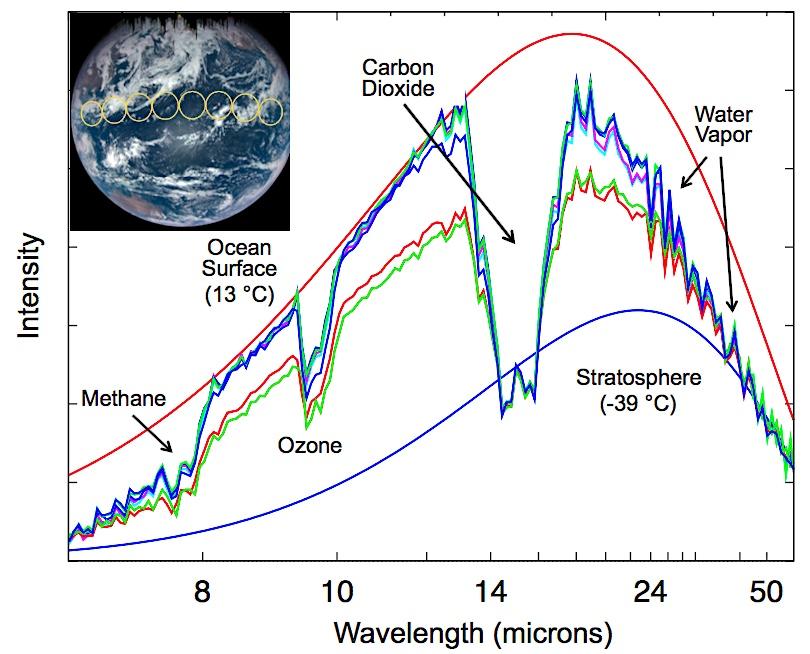 Showing almost entirely ocean and clouds, planet Earth (upper left) appears misnamed in this view taken by OSIRIS-REx on Sept. 22, two hours after its closest approach to Earth. The circles, each about 500 miles in diameter, indicate where the OTES spectrometer made its observations. The peaks and valleys in the spectral curves show absorption of solar energy by methane, ozone, carbon dioxide, and water vapor in Earth’s atmosphere. OTES also took the temperature of the ocean surface (red curve, 55 °F) and the stratosphere (blue, -38 °F). Image by NASA/Goddard Space Flight Center/University of Arizona (Earth image) and Arizona State University (OTES spectrum)

As it happened, the flyby trajectory gave OTES a view of Earth dominated by the Pacific Ocean. Almost no land areas came within the instrument's field of view, which saw clouds and seawater.

Even so, the instrument worked as designed. In addition to identifying minerals, the infrared also excels at detecting gases such as methane, ozone, carbon dioxide and water vapor, which are common in our atmosphere.

"We measured them with OTES and got good 'ground truth' results," Christensen explained.

"Earth isn't our prime target, however," Christensen said. "That will come about a year from now. But the Earth flyby was a great test for OTES and the other instruments on the spacecraft.

NASA’s Goddard Space Flight Center provides overall mission management, systems engineering, and the safety and mission assurance for OSIRIS-REx. Dante Lauretta of the University of Arizona, Tucson, is the principal investigator, and the University of Arizona also leads the science team and the mission’s science observation planning and data processing. Lockheed Martin Space Systems in Denver built the spacecraft and is providing flight operations. Goddard and KinetX Aerospace are responsible for navigating the OSIRIS-REx spacecraft. OSIRIS-REx is the third mission in NASA’s New Frontiers Program. NASA’s Marshall Space Flight Center in Huntsville, Alabama, manages the agency’s New Frontiers Program for its Science Mission Directorate in Washington.