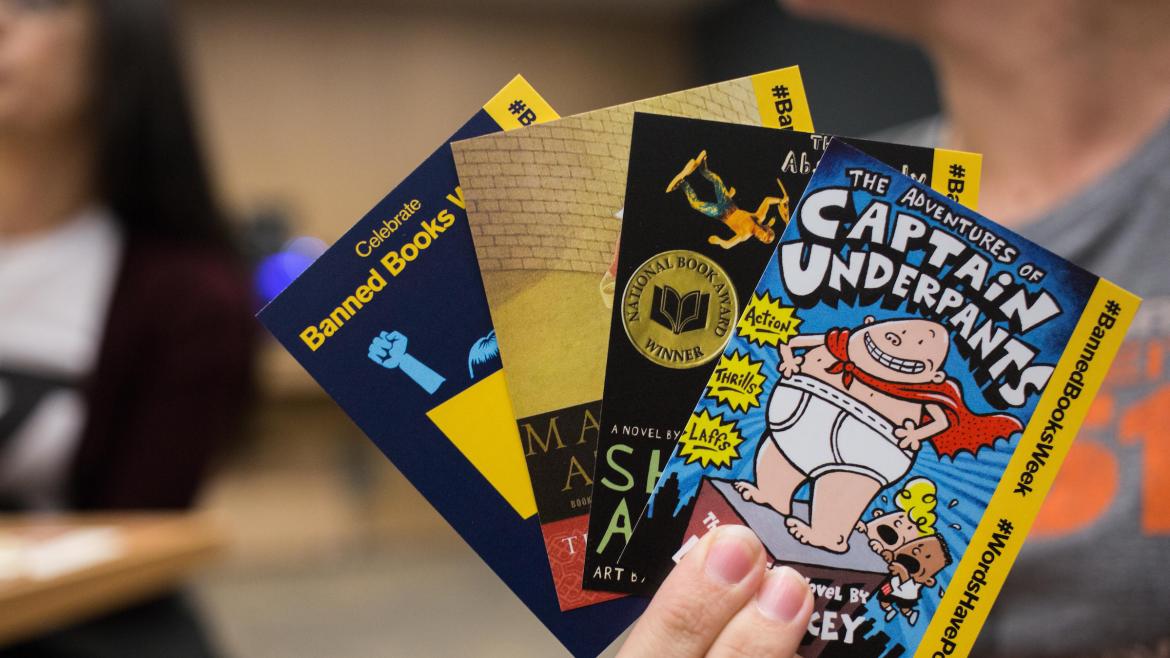 ASU Library highlights Banned Books Week with a growing display of censored texts, a scavenger hunt and a button-making station

When students at Arizona State University enter the library this week, they will be greeted by an unusual sign: “Don’t read these books.”

The sign, directing students to a display of books that have been banned or challenged throughout history, is intended to mentally jolt — cue the record scratch — even the most distracted Sun Devils.

This is the tongue-in-cheek tradition of Banned Books Week, an annual, cautious celebration of books and our right to read them.

“Banned Books Week is probably one of the most important events in the literary profession,” said Ashley Gohr, a First Year Experience librarian with ASU Library. “It’s a week when librarians, publishers, teachers and writers help to educate our communities by inviting deeper conversations about censorship and the power of words and storytelling, especially for marginalized communities.”

ASU Library is looking to open up the event this year to an even larger audience through social media, book displays and other activities that encourage thinking around free speech and about books as a powerful technology.

Gohr said that although the practice of banning books is very serious and concerning, the ASU Library events this week will offer “small acts of creative defiance” that are not only educational but fun too.

Books get banned, restricted or challenged for a variety of reasons, Gohr said, but offensive language, sexual content and racism are among the most common.

Just last year, more than 300 challenges to books were recorded by the American Library Association (ALA), a figure that does not include all the censorship attempts made to films, exhibits, newspapers, magazines, broadcasts, plays and performances.

Walt Whitman’s “Leaves of Grass” was once described as “filthy” by some mid-19th-century booksellers.

The impulse to censor, Gohr said, is a direct response to the inherent power ideas hold and the strength of books to spread them.

“Books are thought of as dangerous, and they are! They contain ideas and stories that can change minds and lives,” she said.

#WordsHavePower is the tagline for this year’s Banned Books Week, an ALA-sponsored event that ASU Library plans to highlight with increasing force each year.

Plans to grow the annual event include a speaker series, a reading flash mob and public readings of censored work on all of ASU’s campuses.

This year, Gohr and fellow ASU Library staffer Ashley Barckett have been busy pulling books from library shelves — “as many as we can fit,” they said — to include in the Hayden Library banned-book display.

The ragtag collection includes such classics as “The Handmaid’s Tale” and “Beloved” and sits alongside a reading nook where the ASU community is encouraged to linger, interact and explore the books “in question.”

Additionally, Gohr and Barckett have put together a banned-book scavenger hunt and set up a button-making station in the Hayden Library mkrspace, for those #RebelReaders who want to wear their Toni Morrisons and Ralph Ellisons on their sleeve.

There will also be displays at the libraries on the West, Polytechnic and Downtown Phoenix campuses.

“This is a great opportunity to celebrate the library as a place of access, discovery and inclusion — particularly at an institution like ASU,” said Barckett, a library information specialist. “Many of our international students come from countries that have different views on censorship, and books are still challenged and banned regularly in the U.S. This event is as relevant as ever.”

Barckett and Gohr said they will be wearing buttons and T-shirts throughout the week that signify banned authors and books, such as “The Autobiography of Malcolm X” and the book-burning “Fahrenheit 451,” which, Gohr said, might be the most ironic banned book of all.

"It's about banning books," she said.

Top photo: ASU librarian Ashley Gohr holds up cards that list the reasons why specific books were banned, in anticipation of a display for banned books at Hayden Library. Photo by Deanna Dent/ASU Now

Sometimes called the world’s longest art gallery, Utah’s Nine Mile Canyon is home to prolific rock art, structures and artifacts from historic cultures, creating a visual story of life during that time. Much of the content is from the Fremont culture, which lived in the canyon for many hundreds of years before roughly 1250 AD. Yet, there is still much that is unknown about the people of the Fr...

Sometimes called the world’s longest art gallery, Utah’s Nine Mile Canyon is home to prolific rock art, structures and artifacts from historic cultures, creating a visual story of life during that time. Much of the content is from the Fremont culture, which lived in the canyon for many hundreds of years before roughly 1250 AD. Yet, there is still much that is unknown about the people of the Fremont culture.

The Bureau of Land Management has launched a unique public archaeology project to help unlock the mystery. Arizona State University’s Center for Sustainable Tourism was chosen to lead the effort bringing together stakeholders from state government agencies to the local community. 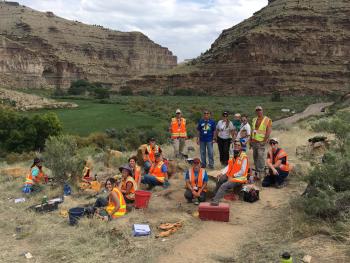 “The BLM have been stewards of this site, but are not necessarily experts in community engagement,” said Christine Vogt, director of the Center for Sustainable Tourism and professor in the School of Community Resources and Development. “This is a new way to get the community involved. And the project represents what our school is about.”

A historically and culturally significant effort

Building on a project that began in late 2016, Utah archaeologists and scholars are joined by individuals, families and professionals in a six-weekend event to excavate a pit structure consisting of a perimeter of large boulders.

The site has intrigued archaeologists and visitors alike.

“A lot of archaeologists have wanted to learn more and excavate but have not had the permits or opportunity to do so. For people who know the place, this is an exciting moment. We are not sure what we will find,” said Jada Lindblom, a doctoral student in the School of Community Resources and Development.

Scholars hope to gain insight into the Fremont people and why they began to disappear.

Lindblom is leading the volunteer initiative, focusing on regional youth. She says that public archaeology is gaining interest and teachers are eager to promote the opportunity to students, who will be working alongside professional archaeologists. So far, students from at least four high schools are scheduled to participate in a three-day weekend of volunteering, which includes camping near the site.

“This is really a hands-on, STEM education experience in a way that most students don’t get,” she said. “We hope the experience not only generates interest in the canyon, but in public lands more broadly.”

So far, most of the students had never been to the canyon before this experience. Although, two girls from the local high school shared stories of family connections to canyon settlers or a grandfather being credited with other discoveries in the canyon.

Lindblom has been working with partners at the BLM to bring together wide-reaching stakeholders, from the Carbon County Office of Tourism to the Nine Mile Coalition and the Utah Rock Art Research Association.

Located about an hour off the road that connects Moab and Salt Lake City, Nine Mile Canyon is on a route that many people already use, offering great potential to build tourism.

At the end of the program this fall, experts from the BLM, Montgomery Archaeological Consultants and local archaeologists will evaluate progress on the excavation and stabilize the site for winter. Much will depend on what they find.

“Making this archaeology site open to the public and interpreted is a five-year project. The question mark is how long it can or should go based on the hard work of uncovering hundreds of years of soils and debris that has fallen onto the pit structure” Vogt said.

Artifacts that are recovered will be displayed at the Utah State University Eastern Prehistoric Museum for those who cannot be a part of the excavation to enjoy.

The project is part of a larger Bureau of Land Management Respect and Protect public awareness campaign and the 50th anniversary of the National Historic Preservation Act. #respectandprotect