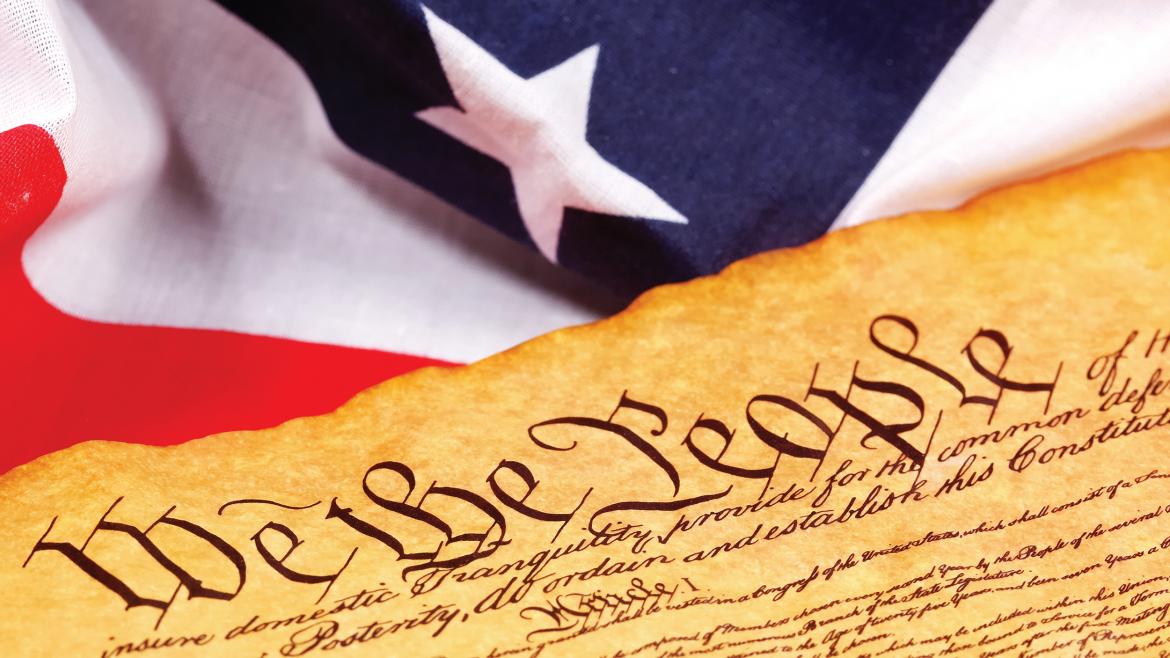 5 things to know about the Constitution

In honor of Constitution Day, ASU hosts events to promote understanding and appreciation of our nation’s fundamental law

Think Americans have a pretty firm grasp on the basics of U.S. government? Think again.

The annual Annenberg Constitution Day Civics Survey recently found that only a quarter of those surveyed could name all three branches of government. What’s more, more than a third couldn’t name any of the rights guaranteed under the First Amendment.

That’s troubling news to Peter McNamara, a professor of practice at Arizona State University's School of Civic and Economic Thought and Leadership (SCETL).

“[Those stats] mean for one thing that it is very hard for people with such limited political knowledge to participate meaningfully and constructively in civic debate,” he said. “Of course, another problem is the things that people think they know but are not actually true! I guess what these kinds of studies show is that there is a lot of work to be done on the civic education front.”

SCETL — launched in the spring — is rising to that challenge. On Thursday evening the school hosted its inaugural Constitution Day Lecture in the University Club on the Tempe campus to promote understanding and appreciation of our nation’s bedrock document. Clint Bolick, associate justice of the Arizona Supreme Court, delivered the lecture titled “The Renaissance of Federalism.” Watch highlights from the evening below:

Earlier this week, SCETL kicked off its yearlong public lecture series “Free Speech and Intellectual Diversity in Higher Education and American Society.” And it will host another lecture from 1 to 2 p.m. Monday, Sept. 18, at Hayden Library to celebrate Constitution Day at ASU.

At Monday’s talk, titled “Hamilton and ‘Hamilton,’” McNamara will discuss the rivalry between Alexander Hamilton and Thomas Jefferson, as portrayed in the hit musical “Hamilton” (which comes to ASU Gammage in January). McNamara will pay special attention to each man's views on the Constitution.

To help beef up your constitutional cachet, here are five lesser-known facts about the historical document:

1. The Constitution was nearly not ratified

Rhode Island initially rejected passage of the Constitution, even refusing to send delegates to the Constitutional Convention. It took two and a half years before the state finally agreed to ratify, at which point it had already gone into effect.

In Pennsylvania, “Some delegates opposed to ratification were dragged from their boardinghouses to attend the vote in the state assembly (in Philadelphia) so that the assembly could meet its quorum,” said School of Politics and Global Studies Lecturer Tara Lennon.

2. Why we celebrate Constitution Day on Sept. 17

This one’s pretty simple: The reason we have Constitution Day on Sept. 17 is because it was the last day the convention met in Philadelphia in the summer of 1787. That was the day all of the delegates still present stepped forward to sign their names with Gen. George Washington, who presided as the president of the convention.

3. The ‘pamphlet wars’ played a crucial role in ratification

“In the pamphlet wars over ratification, it was customary on both sides to use pseudonyms, such as ‘The Federal Farmer’ or ‘Publius,’ withholding authors’ identities in order to keep the focus on ideas and arguments, rather than personalities,” German said.

In a last-ditch effort to sway delegates in Virginia, the Federalist Papers were shipped down to the state, where Washington helped to reprint and distribute them — and it worked.

“It was really only a few votes that made the difference in Virginia,” said Paul Carrese, director of SCETL.

Elbridge Gerry — the Massachusetts governor who approved a salamander-shaped state senate district to favor his political allies, thus giving rise to term “gerrymander” — was originally famous for being one of three delegates who at the end of the convention refused to sign. And even John Hancock — the man with the most famous, iconic signature on the Declaration of Independence — was opposed to ratification as late as January 1788.

Both men eventually voted in favor of it; Hancock doing so after assurances were made regarding the promise of the first 10 amendments, and Gerry after taking the advice of leading delegates such as Benjamin Franklin and Washington who pleaded with delegates to swallow their particular objections and support the larger good achieved by the new frame of government. Gerry later served in the U.S. House and as vice president under James Madison.

5. George Washington thought we should be thankful for it

According to McNamara, on Oct. 3, 1789, Washington issued a proclamation that Nov. 26, 1789, be designated a day of Thanksgiving to God for the “favorable interpositions of his providence, which we experienced in the course and conclusion of the late war, for the great degree of tranquility, union, and plenty, which we have since enjoyed, for the peaceable and rational manner, in which we have been enabled to establish constitutions of government for our safety and happiness, and particularly the national one now lately instituted, for the civil and religious liberty with which we are blessed.”

Technology is a world-changing innovation that has not only revolutionized the way we do business but also has been a way to bring people together, according to the chief technology officer of Starbucks.“One of the things I’ve been passionate about since I was an undergraduate is not technology for technology’s sake, but how it touches humans,” said Gerri Martin-Flickinger, who has been ex...

ASU project to give satellites a shared, optical language 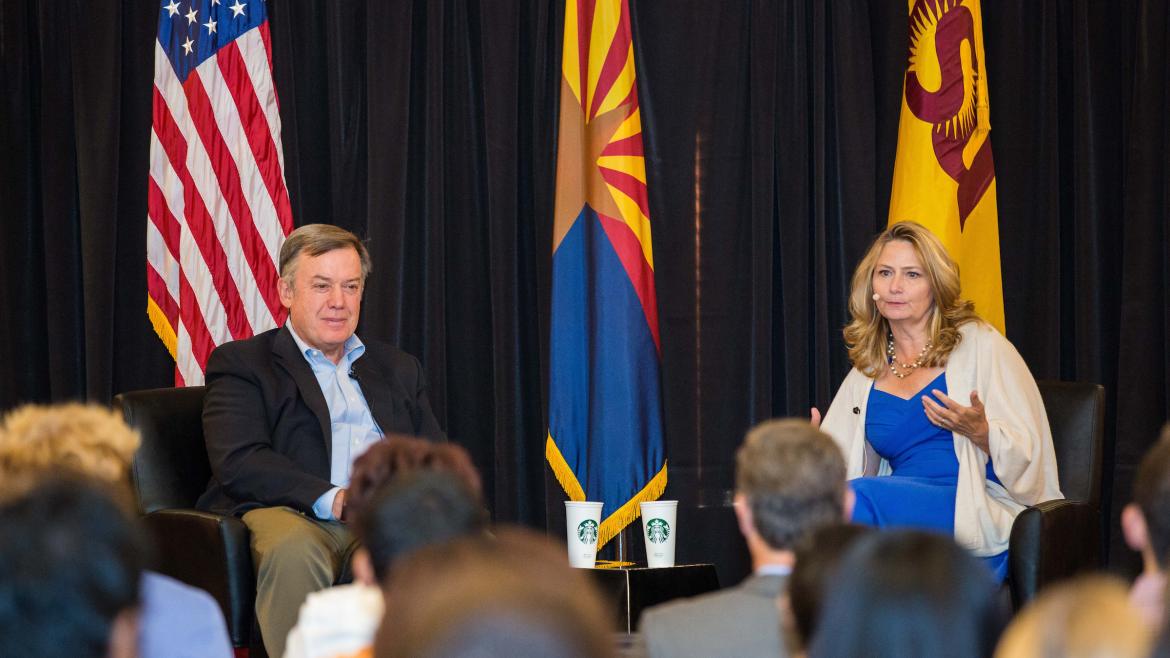 Starbucks CTO discusses tech advances at coffee company and beyond

Technology is a world-changing innovation that has not only revolutionized the way we do business but also has been a way to bring people together, according to the chief technology officer of Starbucks.

“One of the things I’ve been passionate about since I was an undergraduate is not technology for technology’s sake, but how it touches humans,” said Gerri Martin-Flickinger, who has been executive vice president and chief technology officer at Starbucks for two years. She participated in a question-and-answer session with Arizona State University President Michael M. Crow on the future of technology Thursday at Old Main on the Tempe campus.

Martin-Flickinger has led Starbucks, which has more than 24,000 coffee stores worldwide, through several technology advances, such as mobile order and pay, voice ordering and social gifting.

While noting that technology enhancements deliver exciting new experiences for customers, Martin-Flickinger also explained that the human connection remains a central priority for the company.

“Starbucks stores are all about the experience,” she said. “I don’t believe we should remove the human connection. For example, I like when the barista asks me how my day is going.

“You have to think of technology as a whole system,” she told the room full of students.

Crow said that the ASU Online program has also relied on the importance of human interaction.

ASU and Starbucks are in a strategic partnership through the Starbucks College Achievement Plan, a program that offers Starbucks partners the opportunity to earn a bachelor’s degree through ASU Online, tuition-free.

“Starbucks is a company that was very easy for us to work with,” Crow said. “They are a corporation with a conscience, and they view the development of their employees and human beings the same way we do — that it has to be done deliberately, focusing on the person and their success.”

Crow noted that the event was held in the main classroom of what was the Territorial Normal School — the teachers’ college that was the precursor to ASU.

“Starbucks has allowed us to teach people we would not normally be able to reach,” he said. “We feel excited about being able to do that.” Most recently, Starbucks has opened a technology center at SkySong that employs several ASU students — plus a graduate of the Starbucks College Achievement Plan. Martin-Flickinger said the center is working on data analysis, security and mobile app development.

“They’ve been there for two weeks, and they’re already writing real code that will show up in real life,” she said.

She described how the complexity of Starbucks has driven innovation in the company’s technology.

“We have more than 24,000 stores, and we operate in 75 countries,” she said, adding that some stores are company-owned, but others are licensed, joint ventures or franchises.

Add to that the fact that the vast majority of the stores’ business occurs during about three hours of the day — a surge of 20 times capacity. So Martin-Flickinger shifted the company’s technology to the cloud, which can handle the blast of activity.

Martin-Flickinger said she has seen a shift in the skills of computer science graduates over the past few years, who are better at communications — crucial in the corporate world.

“People forget that to be a great technologist, you have to sell ideas,” she said, adding that other key abilities are project-management skills and collaboration as a mind-set.

Crow said that when he was in graduate school in the 1980s, he studied how science and technology could affect democracy — including warnings about the “dark side” of technology.

“It’s a funny and complex set of fast-moving changes that are occurring now, and there are huge amounts of fear in the general population that it will be so disruptive that our social fabric will be affected,” he said.

Martin-Flickinger said she’s optimistic about the ways technology will bring people together and promote accessibility, such as translation, voice activation and vision recognition.

“I see a lot of those having positive implications to society, and they can be nurturing,” she said.