A little more than a year ago, in what quickly became the most memorable moment of the 2016 National Democratic Convention, speaker Khizr Kahn brandished a pocket version of the U.S. Constitution and offered to lend it to then Republican presidential candidate Donald Trump.

The simple but compelling gesture led to a sharp rise in the book’s online sales and searches, with many stores selling out of all their copies. 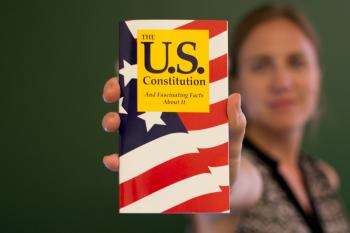 Pocket copies of the Constitution will be given away on Sept. 18 in celebration of Constitution Day at ASU. Download Full Image

“At one point, last year, the Constitution was a top seller on Amazon,” said Brad Vogus, associate librarian for ASU Library.

For the 11th consecutive year, Vogus will be distributing those same $1 pocket Constitutions popularized by Kahn, in celebration of Constitution Day at ASU, slated for Monday, Sept. 18.

An annual national event, Constitution Day was established in 1956 as a way to commemorate our country’s most influential document and help foster habits of citizenship.

“The Constitution is our most important law document. It defines the fundamental law of our government,” Vogus said. “This event gives our students and the public an opportunity to learn more about it.”

In 2005, programs aimed at promoting a greater understanding of the Constitution became required of federally-funded schools and government offices.

This year’s program at ASU will shine a light on the hit musical “Hamilton” and the rivalry between Alexander Hamilton and Thomas Jefferson, as portrayed in the show.

“Since the musical ‘Hamilton’ will be at Gammage this season, we think there will be great enthusiasm for this talk,” Vogus said.

The talk — Hamilton and ‘Hamilton’ — will be led by Peter McNamara, a professor of practice in ASU’s new School of Civic and Economic Thought and Leadership and an expert on the political and economic thought of Hamilton.

The event, to take place from 12:30 to 2:30 p.m., in room C55 at Hayden Library, is free and open to the public. Resources and more information about Constitution Day are also available via the ASU Library guide.

Pocket copies of the Constitution will be given away before the event — but only while supplies last.

James Herbert Williams is the new director of the School of Social Work in the College of Public Service and Community Solutions at Arizona State University in downtown Phoenix. He brings more than 17 years experience as a social worker and more than 20 years experience as a professor and dean. Williams has the distinction of being a fellow in the American Academy of Social Work and Social Welfare...

James Herbert Williams is the new director of the School of Social Work in the College of Public Service and Community Solutions at Arizona State University in downtown Phoenix. He brings more than 17 years experience as a social worker and more than 20 years experience as a professor and dean. Williams has the distinction of being a fellow in the American Academy of Social Work and Social Welfare and a Fellow in the Society for Social Work and Research.

Williams joins ASU from the University of Denver where he is the Distinguished Emil M. Sunley Endowed Chair Dean Emeritus and professor in the Graduate School of Social Work. Under his leadership as dean from 2007 to 2016, the school went from the No. 38 graduate program as ranked by U.S. News & World Report to No. 17. The school added 20 faculty members and saw steady growth in the number of graduate students from 383 to 525. He credits the professors and staff at the University of Denver Graduate School of Social Work for their collective work.

"Each person contributes to a piece of the bigger puzzle," Williams said. "They're all important because if they don't contribute, we don't have a full picture of what we're trying to accomplish.

"And that's my philosophy of how I look at the bigger picture. I try to lead with that aspect in mind — by listening, being collaborative and trying to help us develop a mission as an organization that everyone can see how they contribute to that mission."

The ASU School of Social Work has earned a reputation as one of the best programs in the Southwest with more than 1,800 students enrolled last year (800 undergraduate and more than 1,000 in the graduate and doctoral programs). The school's faculty are recognized experts in many areas including health, behavioral health, child welfare, children, youth and families, planning administration and community practice. The school has several award-winning research centers and offices whose work informs policy makers and social service professionals locally, nationally and internationally.

Williams knows first hand. While on sabbatical from the University of Denver, he served as interim director of the acclaimed Southwest Interdisciplinary Research Center, which focuses on teen alcohol and drug abuse prevention and minority health disparities. Williams also served as a Foundation Professor in the ASU School of Social Work for one year, in 2006, before becoming dean at the University of Denver.

"It's an exciting opportunity," Williams said. "I look forward to working with these wonderful researchers, faculty and scholars that are nationally and internationally known. And because ASU plays an important role in Phoenix and throughout Arizona, I want to engage the local community and leverage our research to the benefit of the community."

Williams has a track record of leveraging research to benefit communities and students. Since 2008, he has worked in Kenya, helping communities deal with issues resulting from violence and conflict. His research there provides valuable internship opportunities to students and led to the creation of a new concentration in sustainable development and global practice for University of Denver graduate students.

"I was able to take my research and position the school for opportunities that make it more attractive for students to want to come and pursue an MSW degree with the school," Williams said.

Williams' has been awarded more than $5 million in research grants. He has written two books, 17 book chapters, and authored or coauthored more than 90 refereed journal articles. He has also presented at 50 national and international conferences.