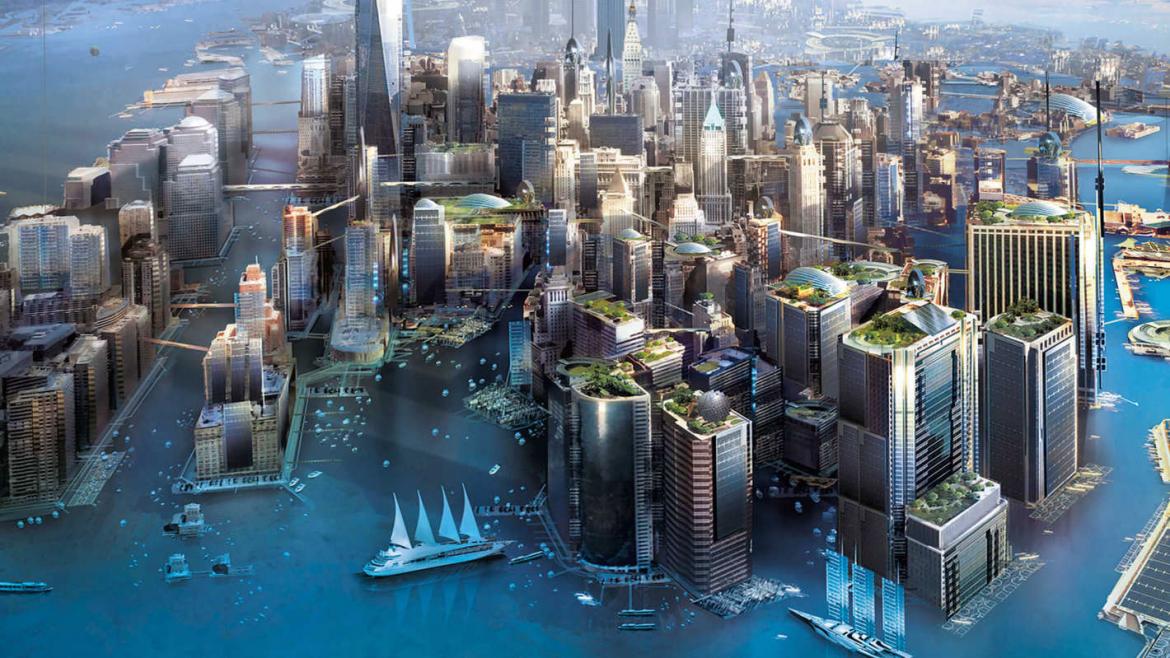 In Kim Stanley Robinson’s most recent novel, “New York 2140,” climate change has reshaped the United States. More than 120 years into the future, sea levels on the Eastern seaboard have risen 50 feet, submerging some of the country's most populous cities and scrambling politics and culture.

Twenty-second-century Manhattan has become a “SuperVenice” where canals have replaced paved streets and skyscrapers have transformed into nearly self-sustaining ecosystems with their own farms and water-purification systems.

In a time — back in the real 21st century — when monster hurricanes ravage communities and public discussion about the effects of climate change is becoming more urgent, the author brings his willfully hopeful view of the future to Arizona State University’s fourth annual Imagination and Climate Futures lecture on Sept. 20 at the Phoenix Art Museum.

In the lecture, “The Comedy of Coping: Alarm and Resolve in Climate Fiction,” Robinson will urge the audience to renounce dead-end apocalyptic thinking and instead think about ways that humans can work together to survive in an increasingly chaotic environment. This faith in collective action and altruism animates “New York 2140,” and it’s integral to Robinson’s entire career, which spans more than 20 books.

But “New York 2140” is about more than climate change and sea-level rise. In a recent interview, Robinson framed the novel as a drama about real estate and financial speculation — energized by drastic environmental upheaval, but also projecting the drivers of the Great Recession and today’s rapidly escalating housing prices in major U.S. cities into a chilling climate future.

Mark Stapp, director of ASU’s Center for Real Estate Theory and Practice and the Master of Real Estate Development program in the W. P. Carey School of Business, shared his expert perspective on “New York 2140’s” vision for the future of real estate in a drowned world.

One of the major characters in the novel is Franklin Garr, a Wall Street day trader who invents the Intertidal Property Pricing Index, or IPPI, to enable financial speculation on “intertidal” real estate properties that are sometimes submerged and sometimes above water, depending on the daily tidal fluctuation. According to Stapp, in the climate-changed world of “New York 2140,” a financial instrument like IPPI “doesn’t seem far-fetched at all.” It’s an attribution model, built along the same lines as many current indexes designed to predict prices and trends for real estate and in other markets. In fact, Stapp is involved with a similar project to use an attribution model to map and predict real estate price changes as a result of the Valley Metro light-rail project in the Greater Phoenix area.

What Stapp liked most about “New York 2140” was the sentiment that “New York is going to be New York,” even in the wake of Earth-rearranging flooding. New systems are required for dealing with the massive influx of water into the city, but older systems and constructs — from the money and culture of Wall Street to the neighborhood associations and cranky building superintendents — are still in force in this radically changed portrait of the Big Apple.

“People still work, still go to bars, still hang out with friends,” absorbed in their daily routines even as their lives are powerfully shaped by the sea-level rise, Stapp said. “New York is a resilient place, and it is not the buildings or the streets or parks that make the community; it’s people that make the community, and they adapt.”

The novel parallels a recent shift in real estate thinking toward resilience, which the Stockholm Resilience Centre defines as “the capacity of a system … to deal with change and continue to develop,” and the ways that “humans and nature can use shocks and disturbances like a financial crisis or climate change to spur renewal and innovative thinking.”

For Stapp, a key element in the resilience of a place is the strength of its social systems: In the wake of Hurricane Sandy, neighborhoods with strong social supports like churches and community groups tended to recover more quickly than neighborhoods with less well-developed networks. In “New York 2140,” simple, low-tech innovations such as community dining rooms inside the densely populated skyscrapers and hyper-local farming to improve food security in particular caught Stapp’s attention because they are technological changes that meet basic, universal human needs and build community ties.

One key point in “New York 2140” that gave him pause was the stubbornness of New York’s denizens and of government to retain density in the city.

“I would assume that the city’s population would disperse throughout the surrounding area, especially to the north in the Hudson River Valley,” he said.

After all, Franklin Garr’s IPPI shows that even as city residents struggle to survive in the intertidal zone, real estate in New York City remains pricey in 2140. Stapp pointed out that, contrary to popular belief, more than 80 percent of U.S. Millennials who own homes already live in suburbs. Some people are irresistibly attracted to big cities, but a majority of Americans are willing to relocate to suburbs, especially in the face of rising housing prices. Affordability, access to employment and quality of life are and will remain important determinants to settlement.

Stapp believes metro Phoenix is a particularly resilient city, precisely because it is not subject to cataclysmic natural disasters like hurricanes or earthquakes. However, with a decades-long drought showing no signs of abating, even desert dwellers will have to adapt to a future that might leave many homeowners underwater.

Kim Stanley Robinson will deliver his lecture “The Comedy of Coping: Alarm and Resolve in Climate Fiction” at 7 p.m. Wednesday, Sept. 20, at the Phoenix Art Museum. To learn more and RSVP for the free event, visit https://comedyofcoping.eventbrite.com.

Editor's note: This story is being highlighted in ASU Now's year in review. To read more top stories from 2017, click here.Sitting in the heart of Arizona State University’s Tempe campus, one of the school’s newest buildings is impossible to miss. The 74,653-square-foot structure jumps out of the ground and reaches toward the sky, catching the eye with its glass windows and copper panels.ASU's... 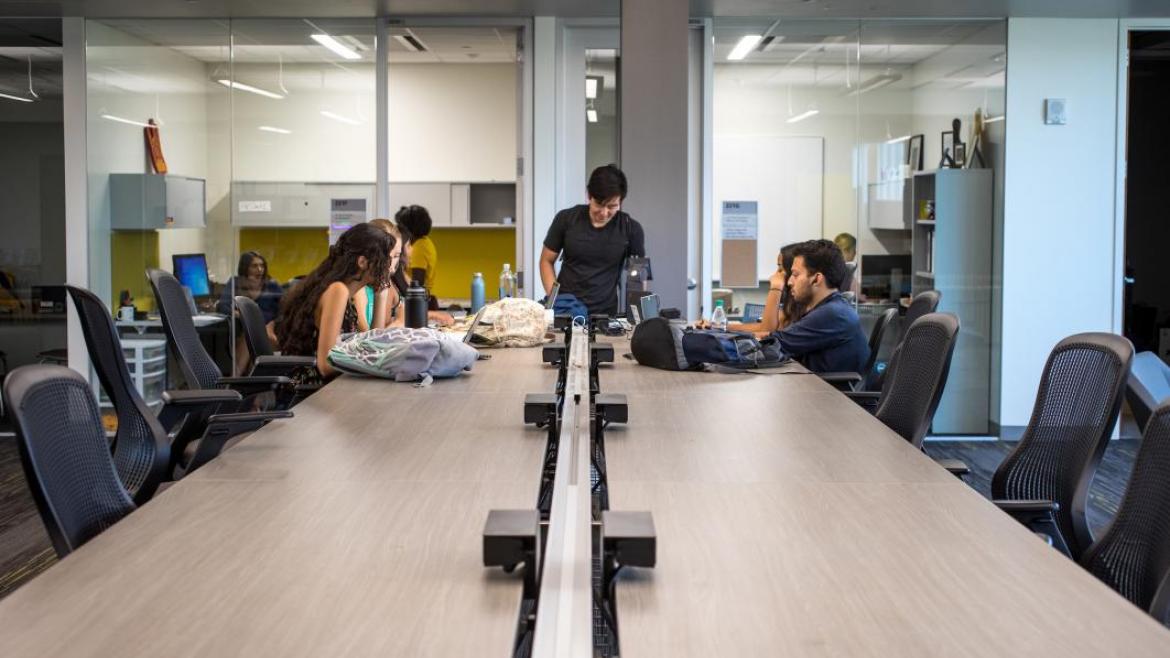 Tempe campus
The doors to ASU's Student Pavilion are now open. Take a look inside.
September 12, 2017

Student Pavilion provides space for student groups, classrooms and studying — all while aiming to be a Net Zero Energy building

Sitting in the heart of Arizona State University’s Tempe campus, one of the school’s newest buildings is impossible to miss. The 74,653-square-foot structure jumps out of the ground and reaches toward the sky, catching the eye with its glass windows and copper panels.

ASU's Student Pavilion is located at the center of student activity and student traffic, and plans are for it to host a variety of shows, productions and guest lecturers, in addition to providing classroom and office space.

“With a new building comes new excitement and interest from the student body,” said Brittany Benedict, president of the Undergraduate Student Government (USG) on the Tempe campus. “We’re hoping that the new traction will have students checking out our space and, in turn, have an interest as to how our organizations can benefit them.”

The USG isn’t the only organization calling the new pavilion home.

ASU's Council of Coalitions and the Programming and Activities Board have moved into the second floor of the building, making good use of the pavilion’s modern office space. And according to Benedict, the design of the building is impressing everyone so far.

“We are working in a naturally lit area since the building is essentially all windows,” said Benedict, an undergraduate student in the W. P. Carey School of Business. “That’s definitely had a positive impact on work being done in our building.”

The building is powered by the PowerParasol photovoltaic array, located between the pavilion and the Memorial Union. The roof of the pavilion is also solar-ready for future photovoltaic installations as the building looks to minimize the amount of energy it uses going forward.

As part of the goal for the pavilion to be a “Net Zero EnergyThis means the total amount of energy used by the building on an annual basis is roughly equal to the amount of renewable energy created on the site.” building, ASU is incorporating plenty of energy-saving techniques. This includes process load metering, exterior shading of windows, high levels of building envelope insulation and a low window-to-wall ratio.

“All of the sustainable practices that have been implemented are what excites me the most,” Benedict said. “It’s a (Net Zero) facility, which means that it’s not using any more energy than what the building itself is producing.”

The pavilion is operated in similar fashion to the university's Memorial Union, which is just a few steps away.

"It's staffed by students, including building managers and event assistants," said Jeffrey Rensel, who oversees the management and usage of the building. "These staff members open and secure the building and provide general daily operational support to the facility."

Even though the pavilion has been open for only a couple of weeks, it has already become a popular study spot for many students.

A wide common area just beyond the main entrance and a third-floor tutoring and supplemental instruction service offer plenty of space and opportunities to further academic success in the new building.

“There is lots of room and outlets everywhere, which really helps,” said Zachary Verlander, a chemistry senior in the College of Liberal Arts and Sciences. “It’s a great place to study and do homework.”

JE Dunn Construction broke ground on the new building in March 2016 and served as the construction team for the Student Pavilion. Those wanting to view the building in its present state can do so here via live webcam. 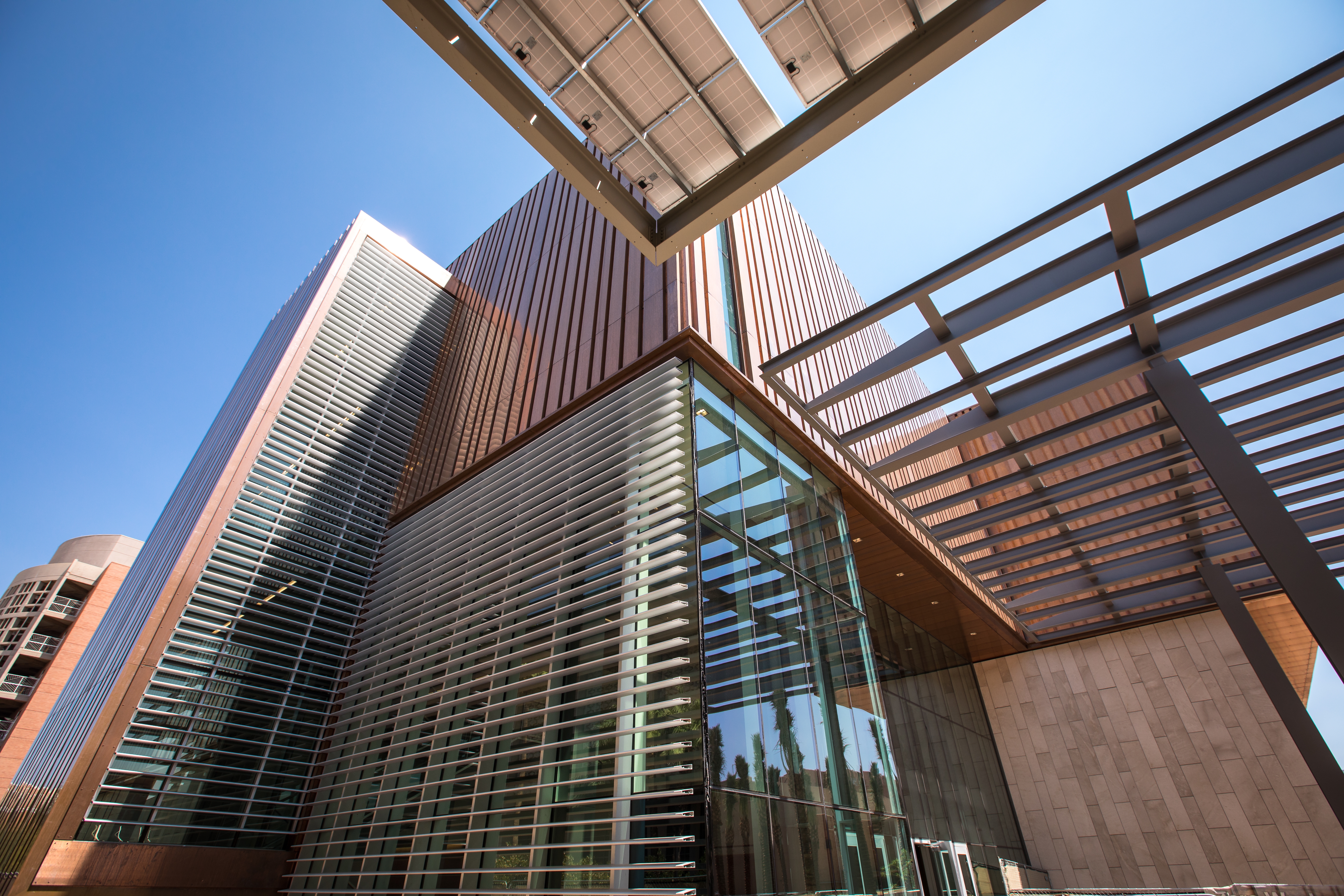 The 74,653-square-foot Student Pavilion aims to be a Net Zero Energy building, in accordance with ASU's goals for Climate Net Neutrality and sustainable building systems. It is also designed to meet specifications for LEED certification. The Student Success Center resides on the third floor of the new Student Pavilion. The building provides students with two new classrooms, plenty of study and social spaces, and offices for student groups. 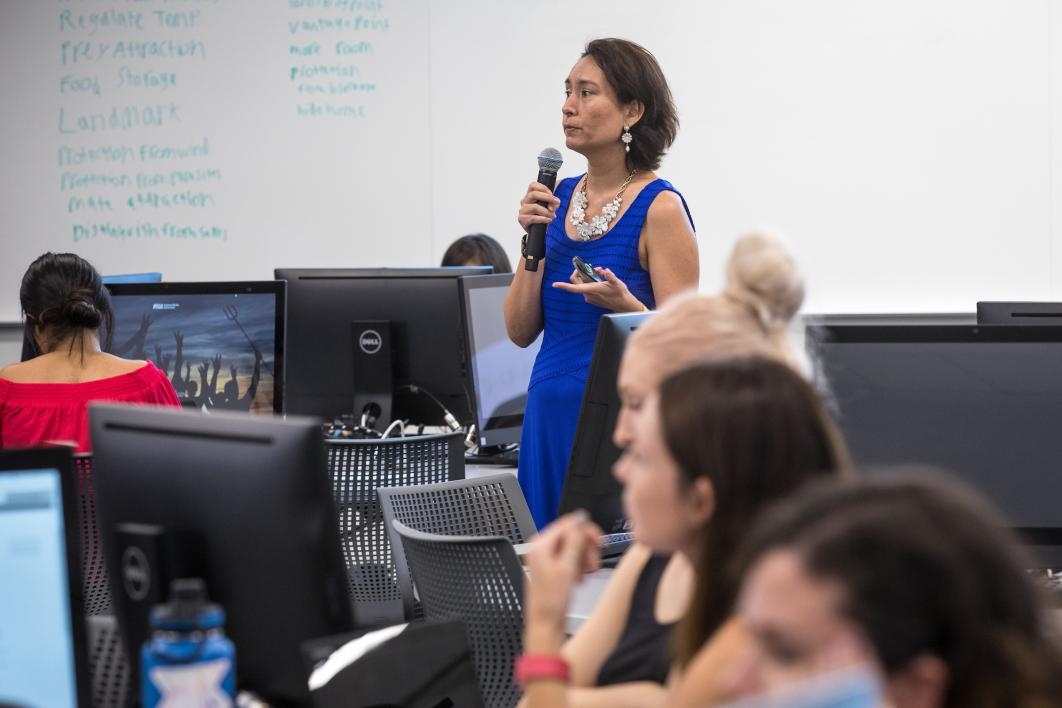 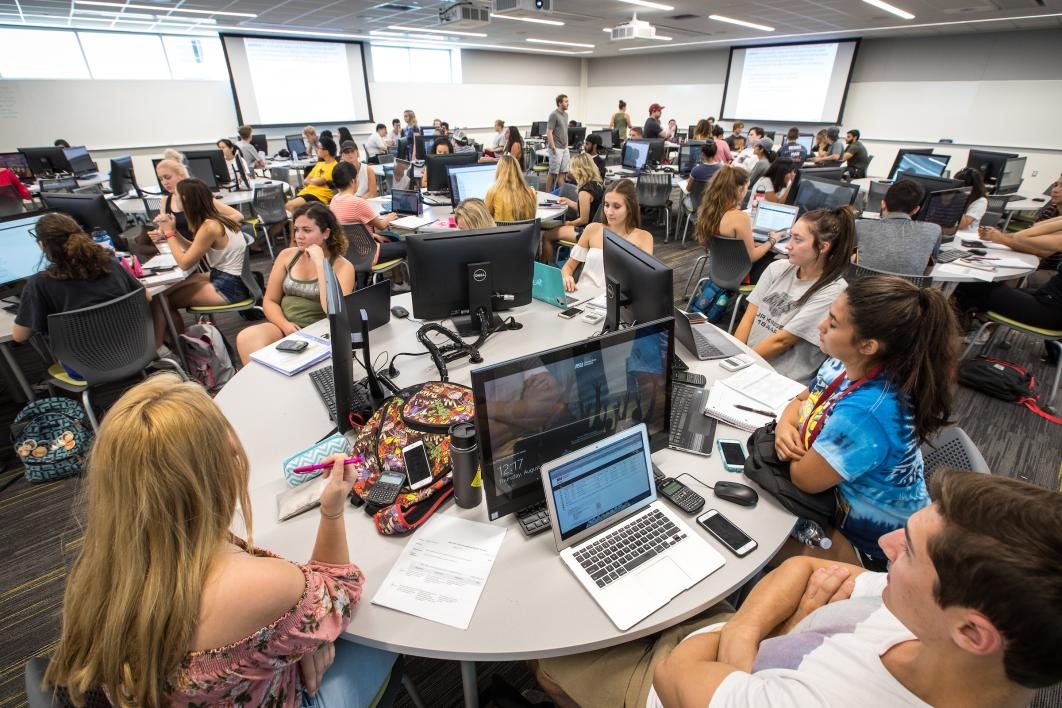 Students in the Bio 100 class wait for instructor Susan Holechek to give the answer to a question in the new Student Pavilion. 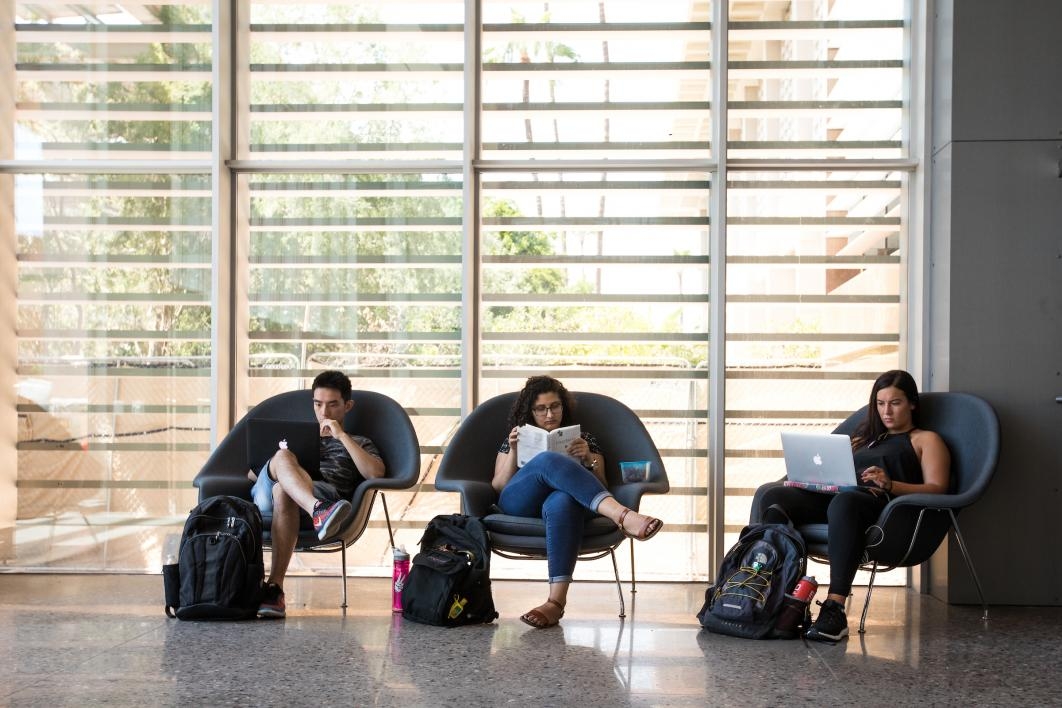 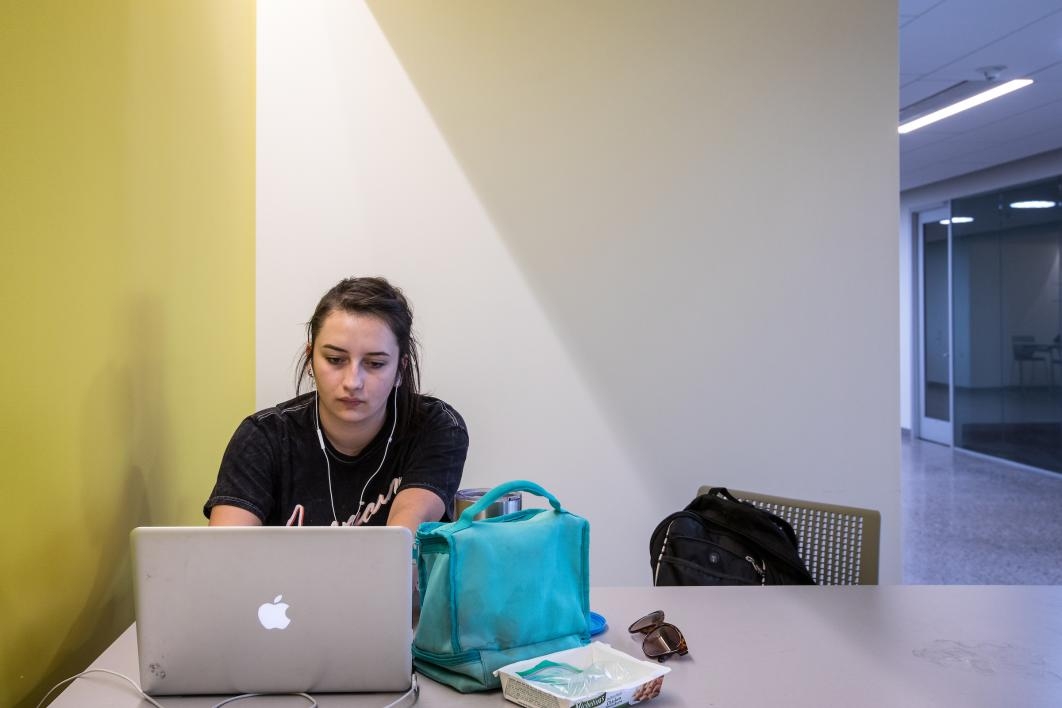 Gabrielle Quintana finds a quiet space to study and finish lunch in the new Student Pavilion.