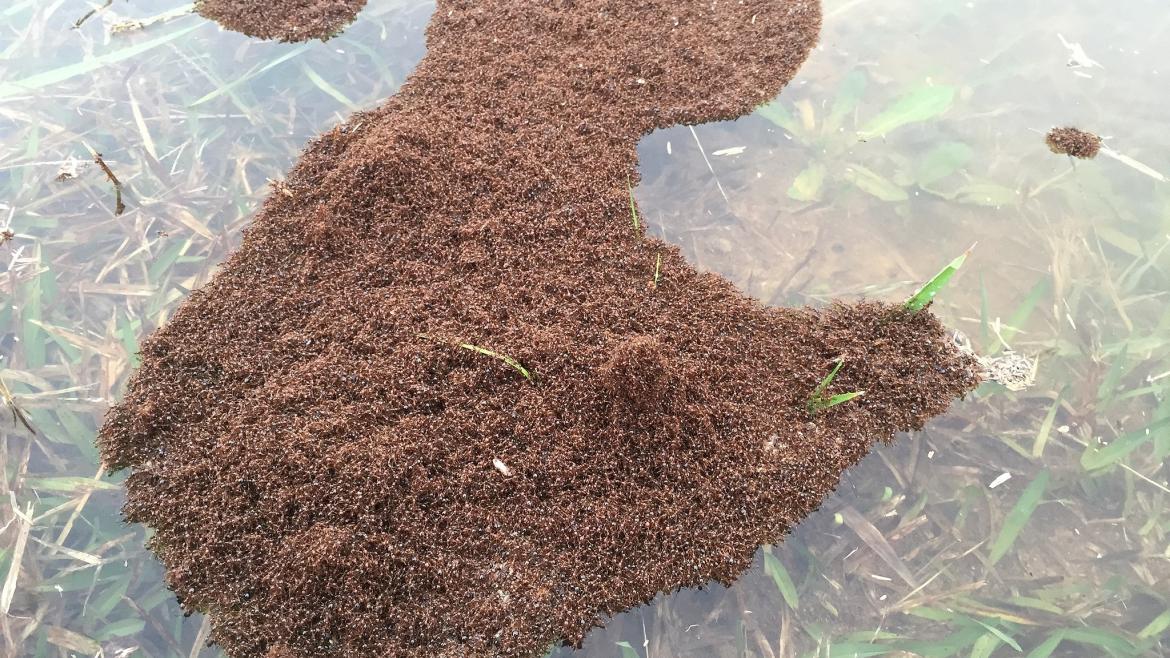 “Life likes to live,” Kevin Haight said after viewing a photo of reddish-brown swirls in a floodwater eddy in southeast Texas.

Haight, a researcher in the School of Life Sciences’ Social Insect Research Group at Arizona State University, was referring to tens of thousands of refugees uprooted by Hurricane Harvey.

Just not the ones you think.

The nation (or at least the media, both social and traditional) has been transfixed by the spectacle of floating rafts of fire ants drifting through Houston’s floodwaters.

“Nightmarish.” “Creepy.” “Stuff of the Book of Revelations.”

There is a complex and fascinating story behind this survival behavior, however, one that evokes more sympathy than revulsion. You still won’t want to bump into a fire-ant raft after you hear it, but you will stare in fascination if you’re lucky enough to see one.

Fire ants sting. There is a scale called the Schmidt Pain Index that attempts to systematize pain from insect venom. Created by an Arizona entomologist, it goes from pain level 1 (“a lover just bit your earlobe a little too hard”) to pain level 4 (“blinding, fierce [and] shockingly electric”).

A single fire-ant sting rates a 1.2, with a honeybee sting rating a 2.

“However, that is for just for a single sting, which is not common to experience with (fire ants),” Haight said. “Multiple stings from multiple workers are much more usual.

“Furthermore, (fire-ant) venom not only causes pain, which is felt almost immediately, but also causes tissue damage in the form of little pustules, which become evident hours to days after being stung and can lead to secondary infection if opened.”

Here’s the kicker: Their stings become significantly more painful and venomous when they’re rafting. How much more painful? Eighty-seven percent, according to Haight. He published a paper in 2006 describing his discovery, which to his amusement is now getting a great deal of attention.

Why are their stings more painful? It’s simple: They are at their most defenseless, and the survival of the colony is on the line.

Here’s what goes on:

As the water table rises in the nest, the ants concentrate as dry space dwindles. As they do that, they gather the queen and brood (the eggs, larvae, pupae, workers). They’re becoming what people would refer to as “stressed.”

“The close proximity of so many workers during rafting may result in a concomitantly higher concentration of alarm pheromones, and thus the increase in defensiveness,” Haight wrote in his paper.

The water continues to rise. Now they float in the water above their nest.

They have some food with them. Their crop contains sugary liquids they can share with larvae and each other. (Fire ants do stash “ant jerky” in their nests — dried protein flakes — but they don’t carry it with them in a flood. As Haight pointed out, “If your house is on fire, what are you going to do — empty the fridge or grab your kids?”)

They’re floating, and they hold on to each other. They cycle from the bottom of the raft to the top in a convection pattern. The rafts are more buoyant if they have larvae, research has shown.

They are completely at the mercy of the current.

“They are a rudderless boat,” Haight said. “They have no control over where they end up. Typically it’s downstream.”

Now the ants are at their most dangerous. Large concentrations of workers are exposed, available for defense, and loaded with more potent venom. They’re also on high alert to grab on to something, anything, and get out of the water.

“If they bump against a tree branch or something in the water, they’ll do that,” Haight said. “It’s one of the things that makes them dangerous in a flood situation when you have people wading or people in boats. If the ants bump up against a boat and they’re able to climb up the sides, then they’re in the boat with you now.”

When they hit dry ground, they will begin digging a new nest. They are incredibly efficient diggers. Depending on how hard the ground is, they can dig a new nest and get the whole colony underground in five to six hours, Haight said.

“They’re never more vulnerable than when they’re rafting,” he said. “They have no place to go. They can’t go deeper in their nest because they don’t have a nest.”

Animals or people trudging through water could break the colony up, or predators like fish. The colony could perish. Without a big workforce, survival becomes dicey. Increasingly painful stings increase the likelihood of survival.

“I would argue that yes, it is an adaptive survival mechanism,” Haight said. “Higher venom doses mean more pain delivered to a threat in a shorter amount of time, which translates to higher repellency.  This would be especially important to a rafting colony since quick repulsion would reduce the chances of worker loss, which would be beneficial since colonies with more workers will have a higher chance of reestablishing a successful nest and territory after the flood recedes.”

Top photo: A "raft" of red imported fire ants in North Carolina floats over land that normally forms the bank of a pond. The land had become submerged due to excessive rain and resultant flooding, which inundated the nest. The raft is anchored to some blades of grass extending above the water's surface. Photo by TheCoz (own work) [CC BY-SA 4.0 (http://creativecommons.org/licenses/by-sa/4.0)], via Wikimedia Commons

Editor's note: This summer, Arizona State University School of International Letters and Cultures Professor Oana Almasan participated in an event in Cluj-Napoca, Romania, to share her experience as an expert in designing participatory processes, and help youth workers from seven European cities better understand what it takes to design and implement successful participatory projects for involving ...

Editor's note: This summer, Arizona State University School of International Letters and Cultures Professor Oana Almasan participated in an event in Cluj-Napoca, Romania, to share her experience as an expert in designing participatory processes, and help youth workers from seven European cities better understand what it takes to design and implement successful participatory projects for involving youth in local governance, and build stronger and more self-reliant communities. Here she reflects on the event.

The workshop I attended shows an increased interest in building strong, self-reliant youth communities across Europe, able to further the democratic principles of EU. It was part of a EU-financed project meant to develop a platform for youth participation at the EU level. 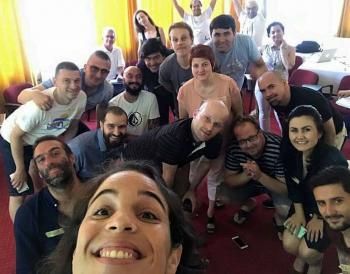 My role there as a trainer was to help youth workers from 9 European countries (10 cities) to understand how participatory mechanisms could benefit their communities and how to plan and design such processes adapted to their specific cultural and societal needs, in such a way that they would actually increase their chances of success.

Studying how culture impacts societies helps you understand how promoting some specific practices enables the development of democratic behaviors. This is the field of public participation. I studied, in the beginning, the specific culture and cultural processes in Romania, right after the fall of communism, when the main preoccupations in the public discourse was to get super-fast to the state of established democracy, so that everybody's life would be better off.

Despite such great hopes and expectations, if you do not take culture into account in designing public policies and local/national strategic development plans, those plans and policies have really high chances of failure. I designed the first collaborative-based participatory budgeting process in a former communist country, eventually drawing the interest of the World Bank. Then, I got to share my experience with countries with similar cultures, with other European countries, and even with students here at ASU.

The summer workshop was the first step in giving 10 European cities spread over 9 countries a better chance in having their youth heard and actively involved in local/central European policy. This would also mean that more and more local/central governments would actually start recognizing the need of employing culturally-specific tools in public decision-making for reaching common goals such as democracy and economic development.

Every two years or so, ASU organizes a conference on participatory democracy. Listening to the stories of European youth, I realized how great it would be to have them shared with our SILC students as well. So, while telling them about the participatory democracy conference that could help them advance their plans in the public sector, I was inviting them to consider a humanities approach to their quest through a potential round table event at SILC. They can share their stories and hear others' stories of resolve and identity. There is interest in it, maybe we can make it work.