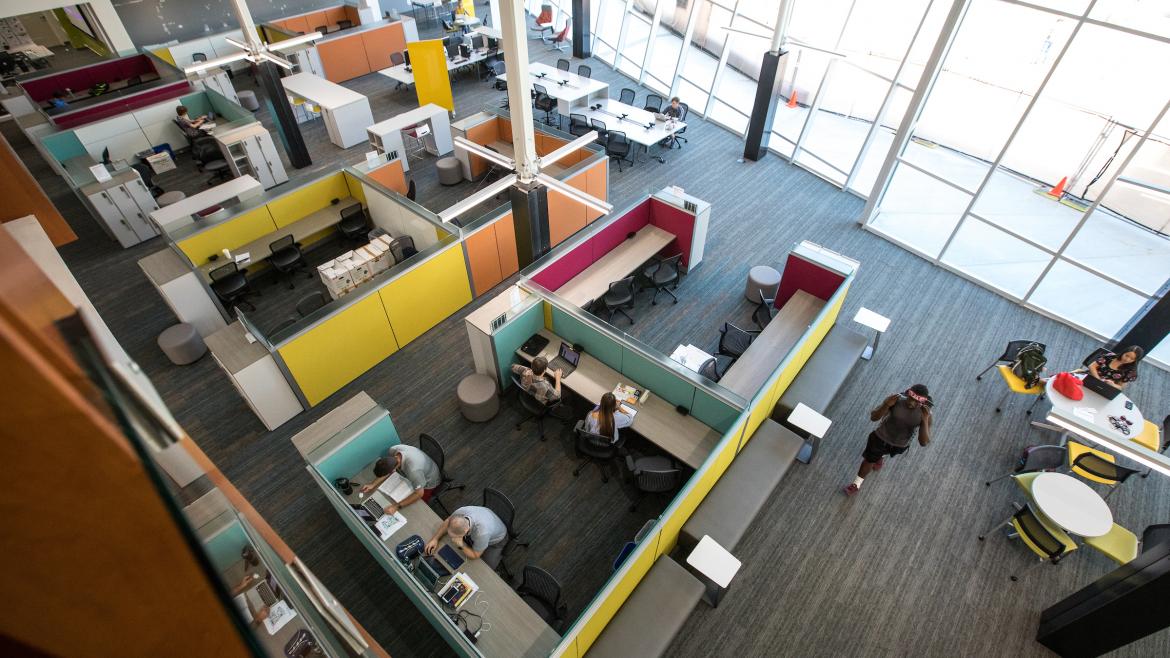 A new chapter for ASU's Department of English

After decades at Language and Lit building, department moves across campus to former law library, revamped and ready to go

Literature is rife with interpretations of home: There’s no place like it in the “Wizard of Oz”; the land Scarlett O’Hara lives on in “Gone with the Wind” is like her mother; Jay Gatsby’s is an opulent façade disguising an empty man.

A unit of the College of Liberal Arts and Sciences, the English Department’s move from the G. Homer Durham Language and Literature building on the north end of campus to the newly renovated, former law library was one of necessity and opportunity, CLAS Dean Patrick Kenney said. It will be joined in its new location on the south end of campus by the rest of the CLAS faculty — from such departments as life sciences, economics and geography — in Armstrong Hall, just north of Ross-Blakley.

The Institute for Humanities Research will also share space with the Department of English, on the first floor of Ross-Blakley Hall.

For some, the move has been bittersweet. Graduate program manager Sheila Luna spent 20 years in her office at the Language and Literature building. At first, she was hesitant at the idea of moving after all those years. Then she saw the new space.

On a recent afternoon in August, she and Glendolyn Neumann, who works in business administration for the English Department, took a quick break from moving to admire the architecture and abundant daylight in the entryway of Ross-Blakley Hall while construction workers put the final touches on drywall and flooring.

“It’s definitely more modern,” Neumann said. “And before, we were all spread out over campus. Now we have the chance to be in the same building at once, which is exciting.”

The space maintains its original three stories, but gone are the rows of towering stacks crammed with legal texts (the Sandra Day O'Connor College of Law moved to the Downtown Phoenix campus last summer). They’ve been replaced by open floor plans divided into “neighborhoods” made up of shared desk spaces for teaching assistants and faculty associates; more private, enclosed enclaves for small meetings and student consultations; and fixed offices for more established faculty and staff. Jim Blasingame sorts through years of artifacts in his office at the G. Homer Durham Language and Literature building. In the background is the famous peanut-crumbles chair. Lots of thought was given to bringing daylight into the space, facility space plan coordinator Kent Jones said. 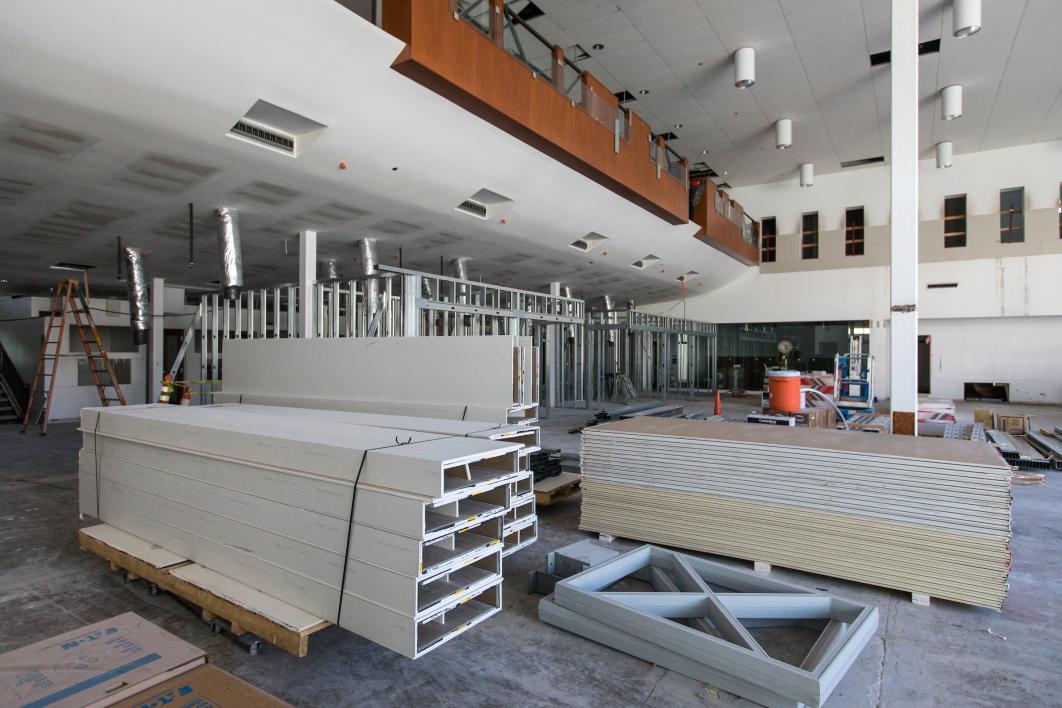 Many of the original architectural details, such as walkways that overlook lower levels, were kept intact. 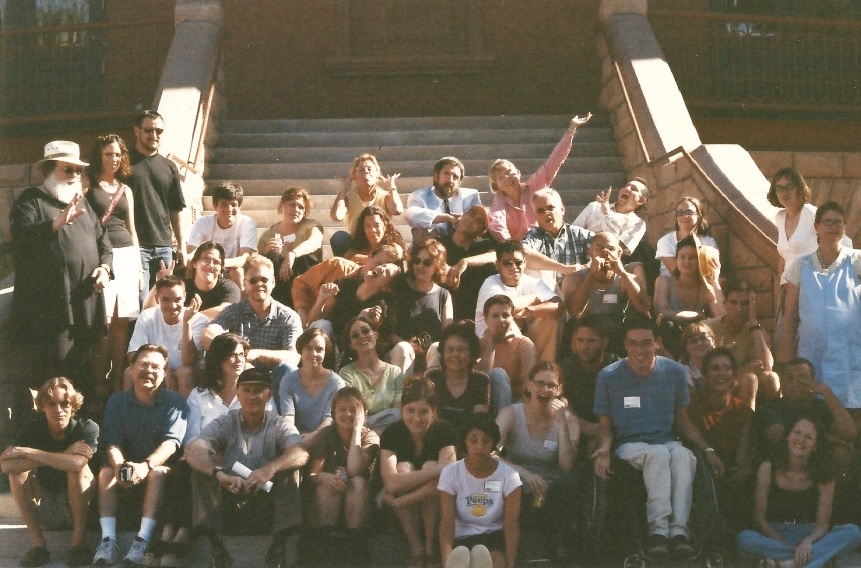 We're not sure if there's a record for most boxes required for a department move, but we're guessing the book-filled offices of the English Department faculty — such as this one at Language and Lit belonging to Kevin Sandler, associate professor, director of the Film and Media Studies Program and Scooby-Doo fan — put them in the running. Professor Karen Adams (looking at a Russian snow globe, one of her collection) has worked out of her office in the Durham Language and Literature Building for nearly 25 years. Though it would be a change to switch to the other side of campus, she said she looked foward to the linguistics lab in the new English Department digs. 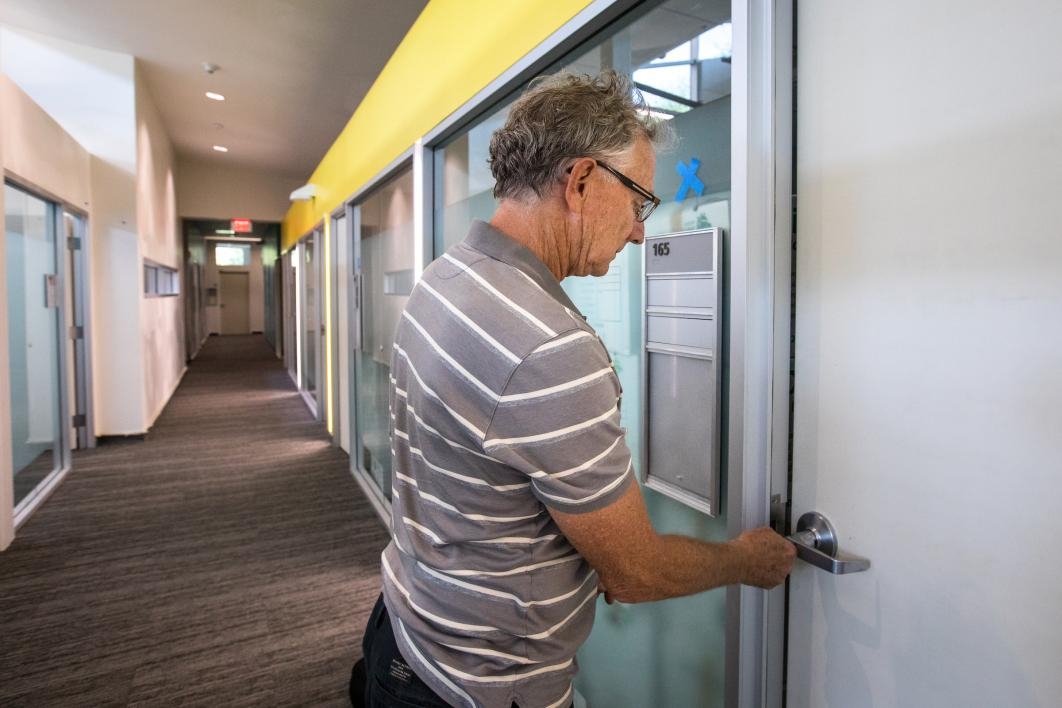 Literature Professor Taylor Corse opens his office door for the first time as Department of English faculty began moving into their new offices in Ross-Blakley Hall on Tuesday. 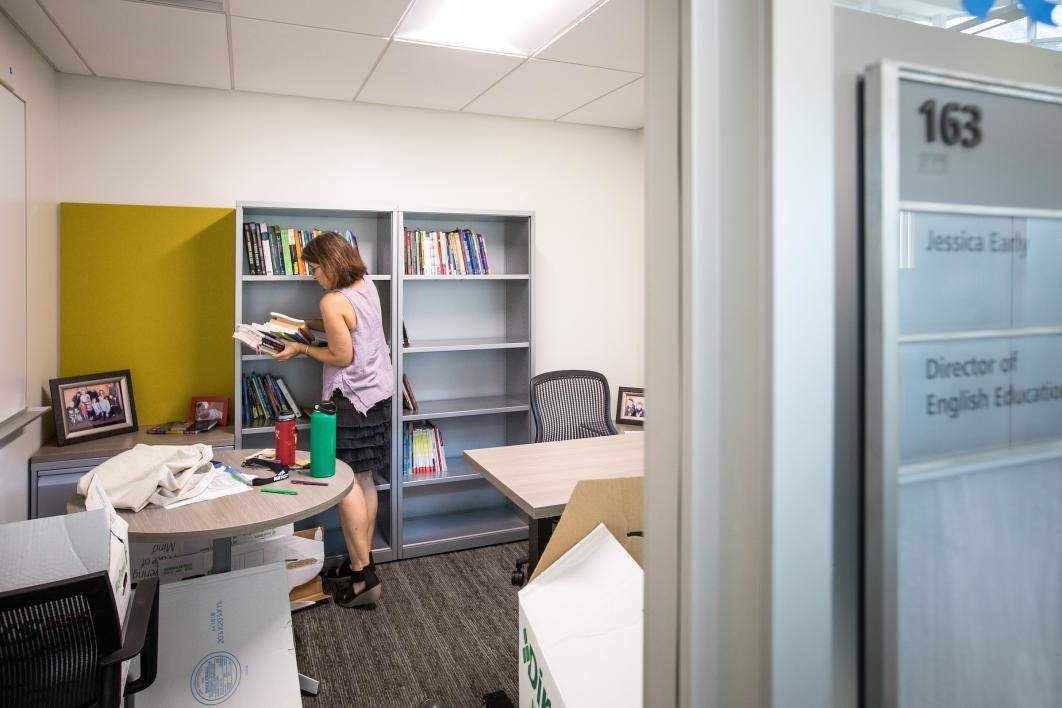 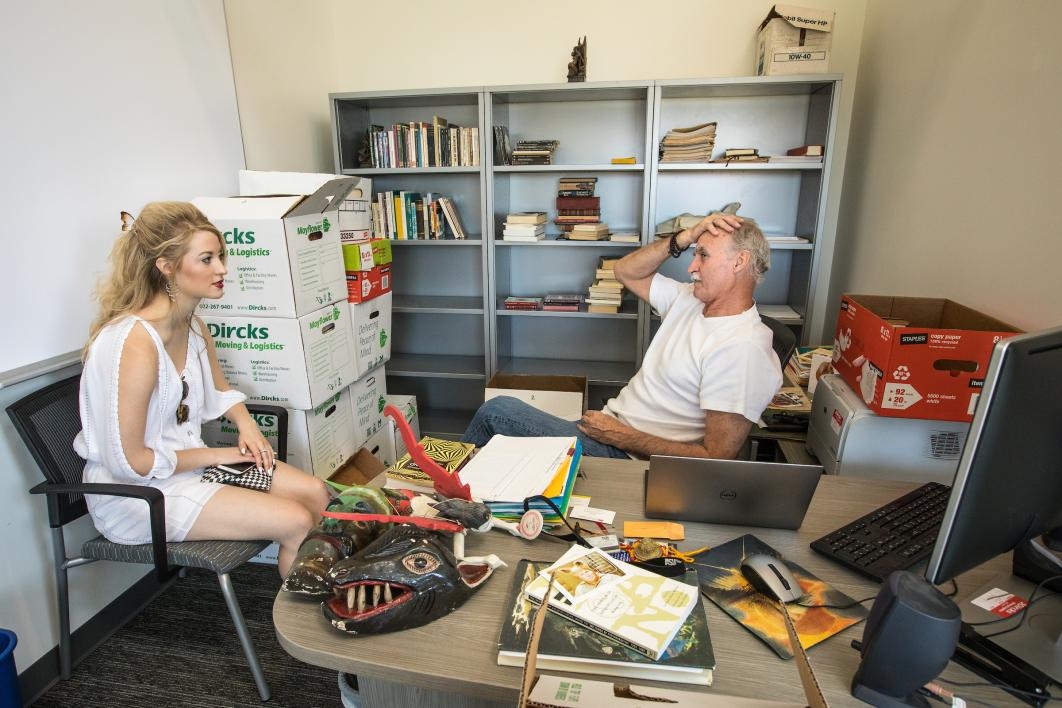 Professor Mark Lussier takes a break from unpacking to talk with theater junior Fay Schneider about her honor's thesis as Department of English faculty moved into Ross-Blakley Hall on Tuesday.

Because the building is going to have so many different users — including faculty, staff, alumni, visitors, students and collaborators — facility space plan coordinator Kent Jones said that he and his team tried to create areas more conducive to collaboration. Special attention was given to ensure there was more natural light in public areas and there were informal places where people could meet and strike up a conversation.

“Part of the idea behind the design of the space was to get people out of their office,” he said. “We’re hoping there will be some creative collisions.”

Aesthetically the building is stunning. Floor-to-ceiling windows drench the first floor in natural light, and exposed ductwork gives the space a modern, industrial feel. Unexpected angles, rounded corners and high, arched ceilings keep things interesting. A peculiar stairway, original to the building, juts out into nothingness at one end, overlooking the first floor. Jones and his team call it the Titanic staircase because it comes to a point at the overhanging portion, not unlike the bow of the boat where Jack and Rose shared that memorable cinematic moment.

Faculty and staff had been preparing for the move months in advance, clearing out decades-worth of artifacts from their offices in the Language and Literature building. Among the boxes piled in Professor Jim Blasingame’s office was an old leather wingback chair filled with “peanut crumbles.”

“It belonged to two professors before me, and one of them ate peanuts in it,” he said with a grin. Blasingame found bits of the snack food in cracks and crevices of the chair for years.

Karla Elling, former Creative Writing Program manager and an English alum herself, may have been there when those peanut crumbles first found their way into the chair. She came to ASU as a freshman in 1961, when the English Department was still located in the University Club.

“The first poetry reading I heard at ASU was in 1961 — Robert Frost,” Elling said.

Then, in 1964, “The English Department spread out from the old red brick building to the six-story Language and Literature building, the Piper Center and into collaborations with other wildly disparate areas,” Elling said, “various art disciplines at Herberger, palliative care at Mayo Clinic … Alzheimer’s units in the Valley, Arizona high schools and grade schools. If we could dream it, we could do it. The English Department, wherever housed, is a whole life, a window to the world.”

Salvador Ortega is an ASU Online student with Arizona State University's College of Public Service and Community Solutions who lives in Franklin, Tennessee. But that didn’t stop him from joining ASU students from the Downtown Phoenix campus to compete in the Cyber 9/12 Student Challenge, a national competition where students develop and defend policy recommendations to resolve a cyber attack wit...

Salvador Ortega is an ASU Online student with Arizona State University's College of Public Service and Community Solutions who lives in Franklin, Tennessee. But that didn’t stop him from joining ASU students from the Downtown Phoenix campus to compete in the Cyber 9/12 Student Challenge, a national competition where students develop and defend policy recommendations to resolve a cyber attack with global implications.

“It can be hard at times to feel like part of the ASU campus and experience,” said Ortega. “But, participating in the 9/12 competition on campus, and then in Washington, D.C., gave me a chance to truly work with fellow ASU students, visit the campus and understand what "Fear the Fork" means."

“Fear the Fork” is a phrase used by ASU students and alumni to show school pride.

Ortega’s teammates benefitted from his experience. The 39-year-old is an IT professional who specializes in cybersecurity. But he credits his teammates for the knowledge they brought with backgrounds in public policy.

“I had competed in technical capture the flag competition before but and those kinds of events test you from a technical perspective,” Ortega said. “They don’t challenge the economic, political, policy, and social challenges that 9/12 presented, so having a team of technicians will not win you the competition.”

A graduate student in emergency management and homeland security, Ortega enjoyed working using collaborative technologies to tackle the problem presented by the competition. He also admired seeing how next generation leaders work through problems.

“They had outstanding problem-solving skills and their attitudes and aptitude set them apart,” Ortega said. “I told all my teammates that I would hire them any day of the week!”

The most difficult part of the experience came when Ortega and his teammates advanced to the semi-final round of the Cyber 9/12 Student Challenge. New elements were introduced that forced them to adjust their analysis and recommendations overnight.

“I'm older and I can't do an all nighter like the 20 something-year-olds," Ortega chuckled. "I need my old man sleep." 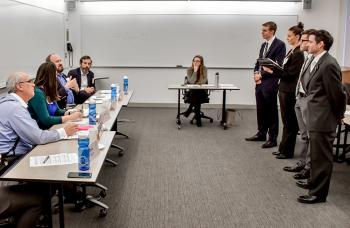 Salvador Ortega (right) listens along with teammates to a judge's question during the Cyber 9/12 Student Challenge held in Washington, D.C. in March 2017. Download Full Image

Ortega hopes more online students consider joining the competition. Students must pay their way to Phoenix for a preliminary event that determines which teams from ASU will compete in the national event. Information on how to enter and upcoming info sessions can be found at https://publicservice.asu.edu/content/cyber-912.