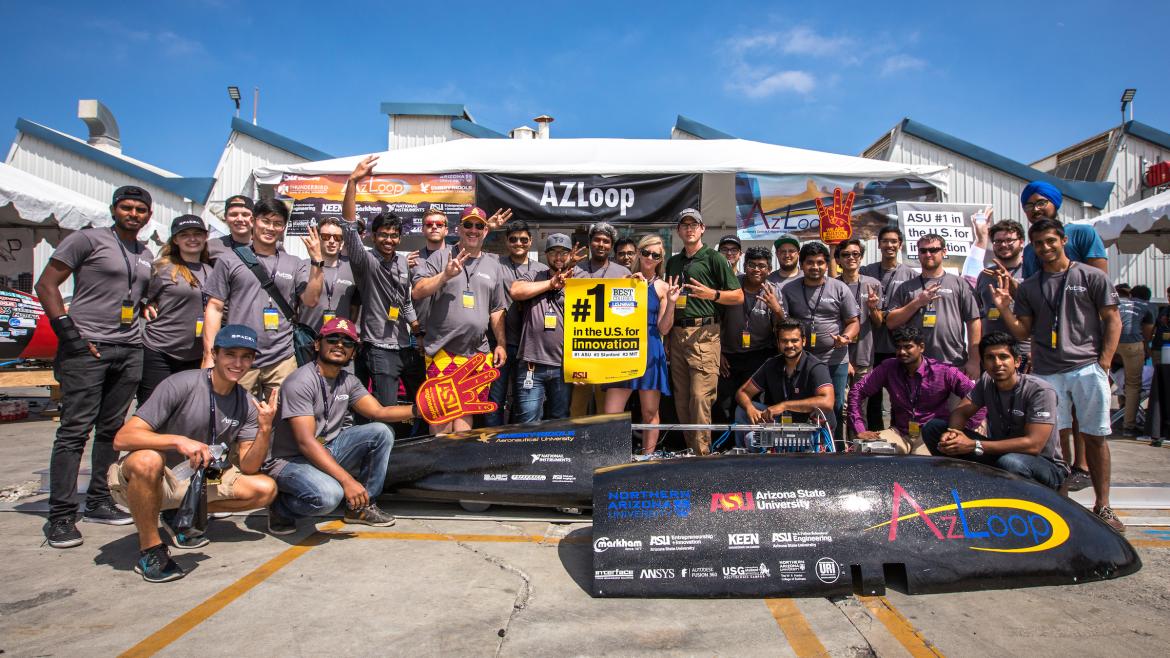 Team made up of students from ASU, NAU and Embry-Riddle make it to top 8 at SpaceX

HAWTHORNE, California — AZLoop — a team made up of students from Arizona State University, Embry-Riddle Aeronautical University and Northern Arizona University — finished in the top eight out of 35 teams this weekend at the second hyperloopHyperloop is a new form of proposed mass transit that promises to hit speeds of up to 750 mph. competition sponsored by SpaceX.

The winner was the German WARR team, with a top speed of 201 miles per hour.

“Our team did extremely well while we were here,” AZLoop team co-lead Lynne Nethken said. “We succeeded with flying colors through all of the functional tests. ... The fact that we came in as a new team and we competed neck and neck and came out with the same amount of points as these teams who built last year is pretty incredible.”

The AZLoop team ended up with a total of 88 points, tying with the top teams running at the competition, all of whom had pods in competition last year.

With the knowledge their pod is able to compete at the highest levels, AZLoop is champing at the bit for the next competition

“Our pod is fully functional and ready to go in that tube,” team co-lead Josh Kosar said. “Everything we have to do is tweaking.”

Teams from 35 countries came to compete. The bar to bringing home a win was the fact that there was only one vacuum tube for competition, which took 30 to 45 minutes to depressurize and repressurize. Getting pods on and off the track was also time-consuming.

“At the end of the day, when it comes to getting into the hyperloop tube, there are only so many times they can do, especially in a vacuum environment, because it takes time to depressurize and repressurize the track,” Nethken explained.

Kyle Squires, dean of the Ira A. Fulton Schools of Engineering, praised the AZLoop's hard work.

“The team did an unbelievable job — going from essentially a standing start months ago to finishing near the top,” Squires said.

“What they created was indeed an engineering feat, and the passion, energy, drive and commitment put forth by everyone was amazing,” Squires said. “My hope is that this experience empowers and inspires these students and others to continue to push the limits on innovation.”

AZLoop is the only team with a test track and a vacuum chamber, giving them an edge in future. Their workspace and test track are at ASU’s Polytechnic campus.

“If they let us in there, we’d knock their socks off,” said Chris Kmetty, team adviser and an engineer with Markham Contracting, who built the test track. Kmetty is also an alumni, part of the Class of 1997. 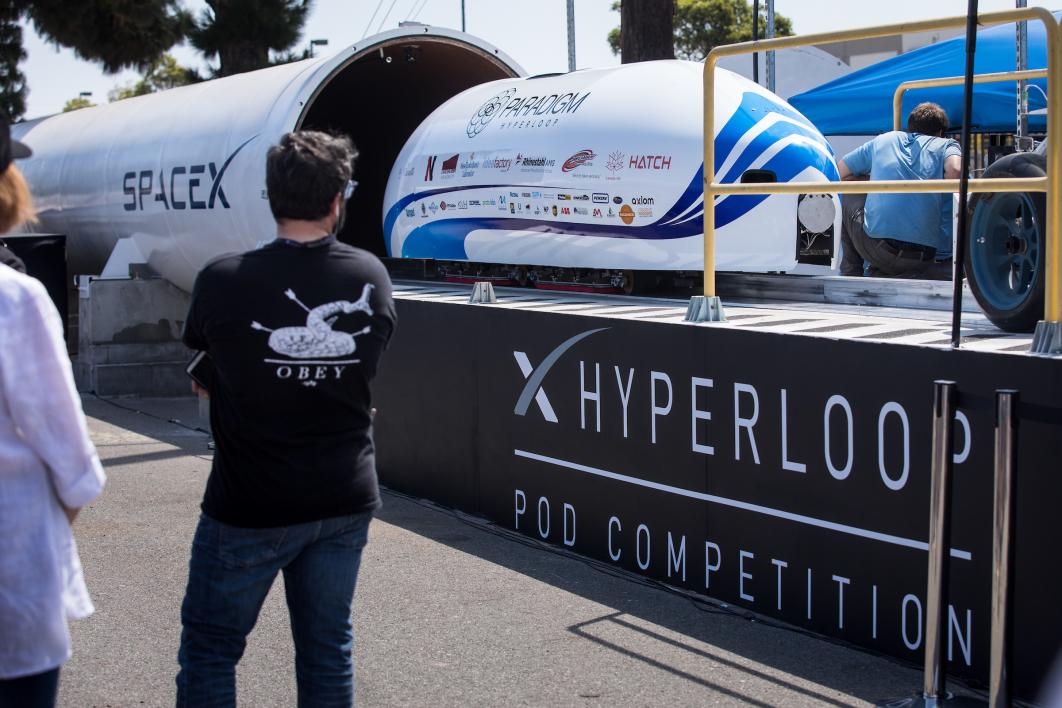 The U.S./Canadian team Paradigm pod is on the track and soon to enter the pressurized vacuum tube for the first run of the SpaceX hyperloop competition Sunday in Hawthorne, California. While the AZLoop team was one of the top point earners in a week's worth of tests, it was not one of the three finalists to race in the 1.25-kilometer-long Hyperloop vacuum chamber. 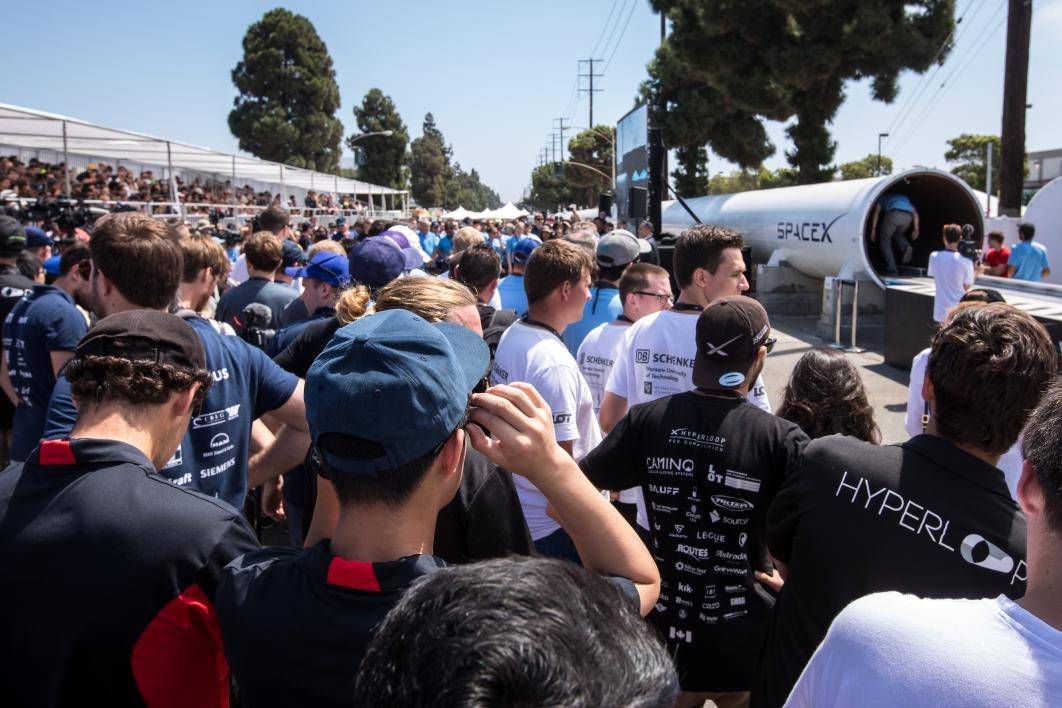 Around 3,000 people watch as the U.S./Canadian team Paradigm moves its pod into the vacuum chamber at the SpaceX facilities in Hawthorne, California, on Sunday. 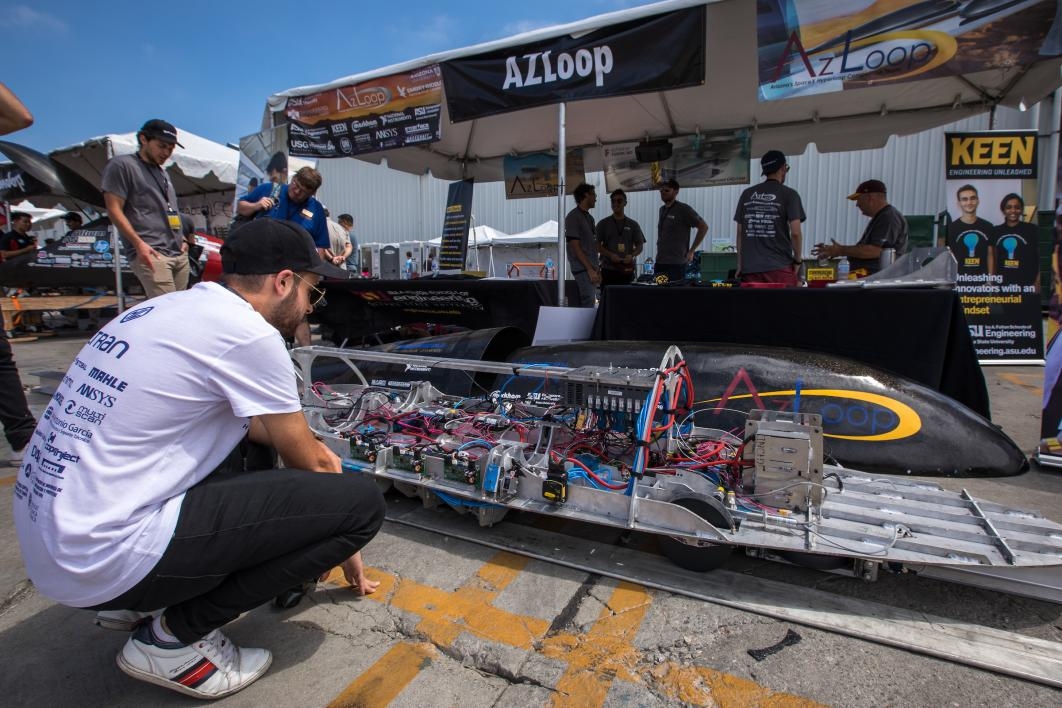 Alberto Ibernón, with the Universitat Politecnica de Valencia in Spain, looks over the AZLoop team pod Sunday in California. 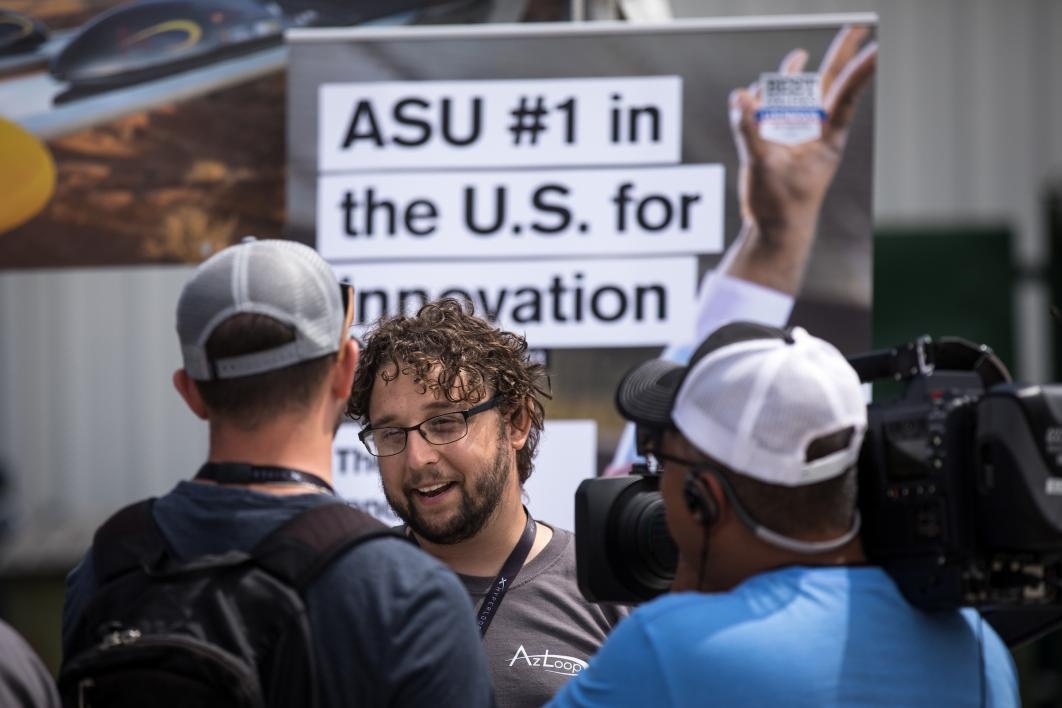 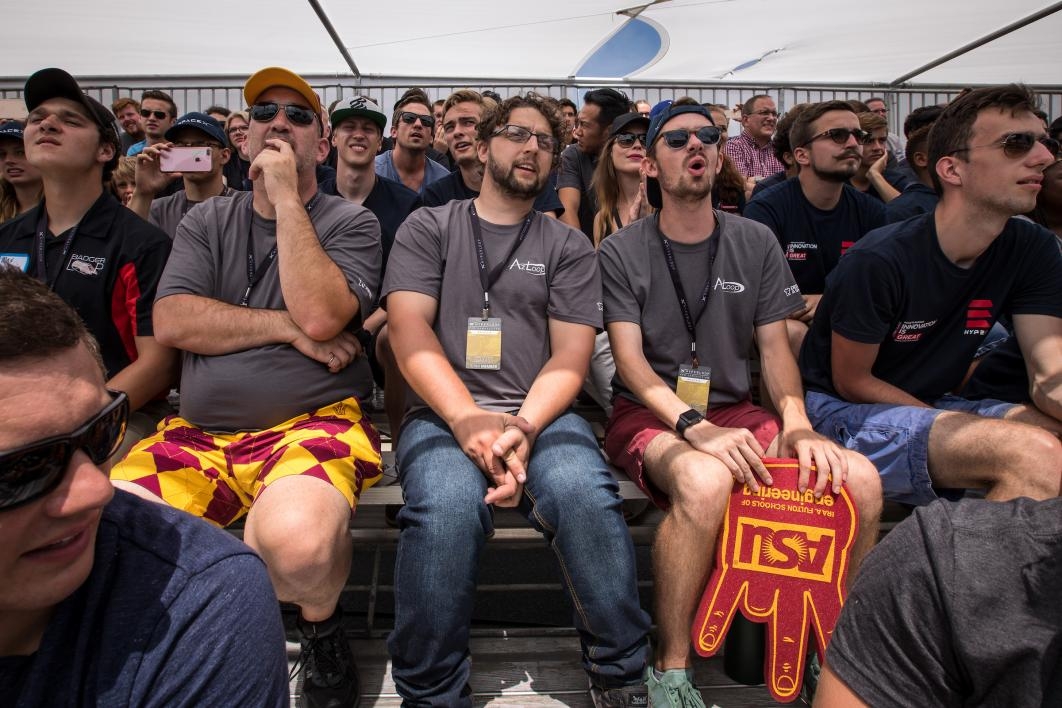 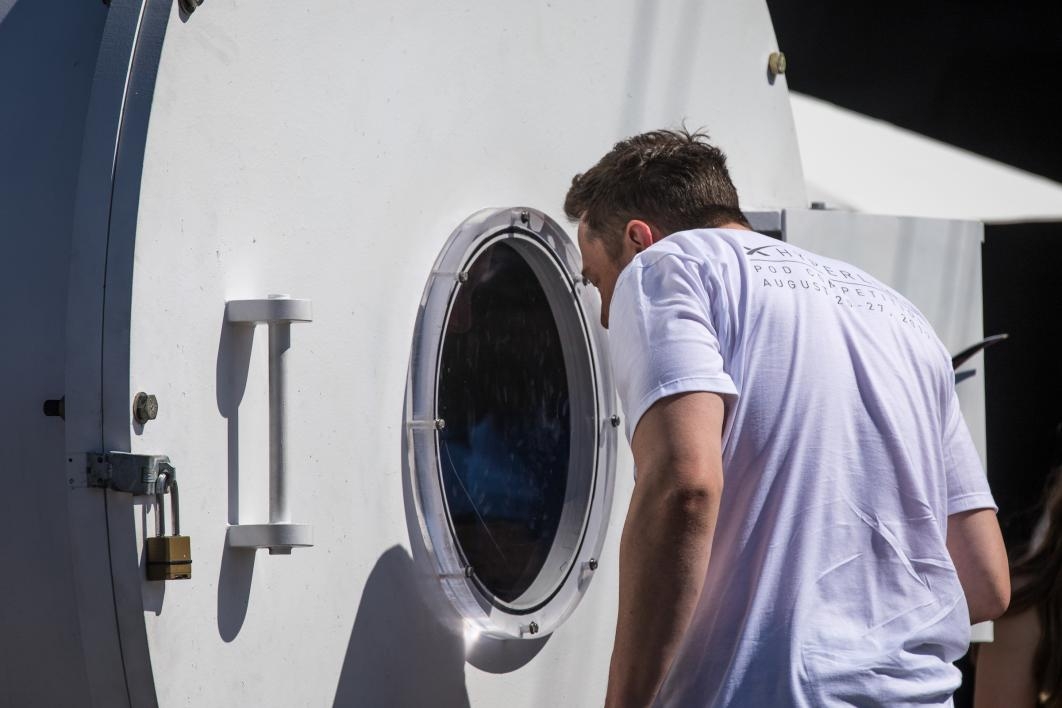 SpaceX founder, CEO and CTO Elon Musk looks in the pressurized tube before speaking during the finals of the SpaceX competition Sunday in California. 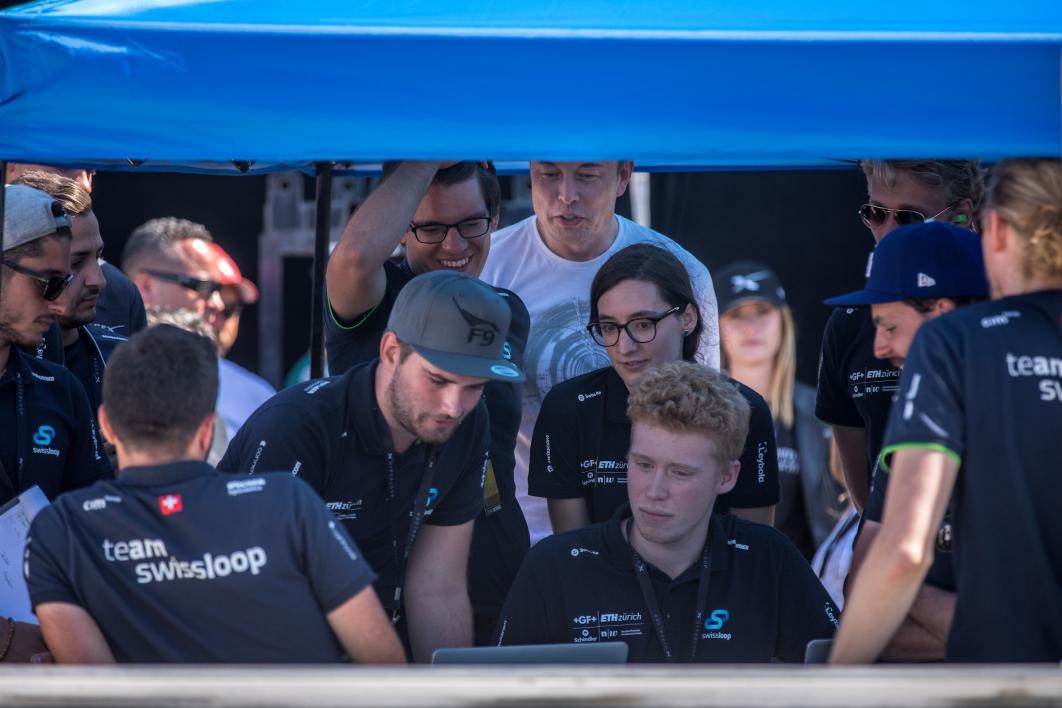 Elon Musk (background) looks on as Team Swissloop tries to fix a connectivity problem during the finals Sunday. 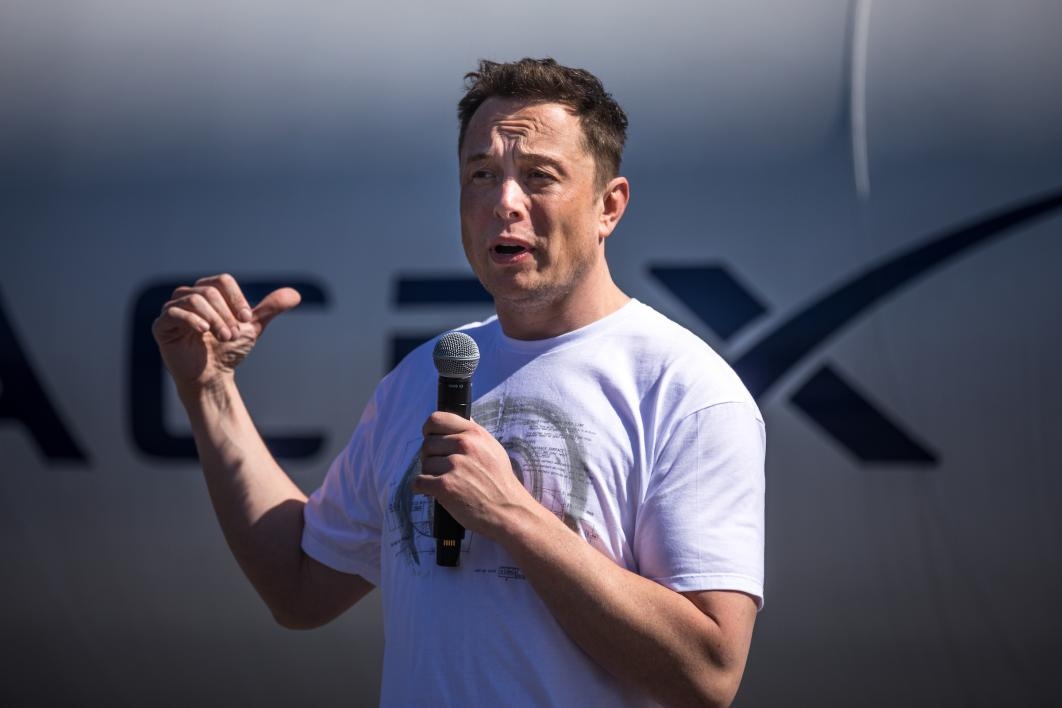 Elon Musk speaks during the finals of the SpaceX competition at the SpaceX facilities in Hawthorne, California, on Sunday. Musk explained that the competitor in the vacuum chamber, Swissloop, was having technical problems and would need time to pressure up the chamber, then pressure it down again. 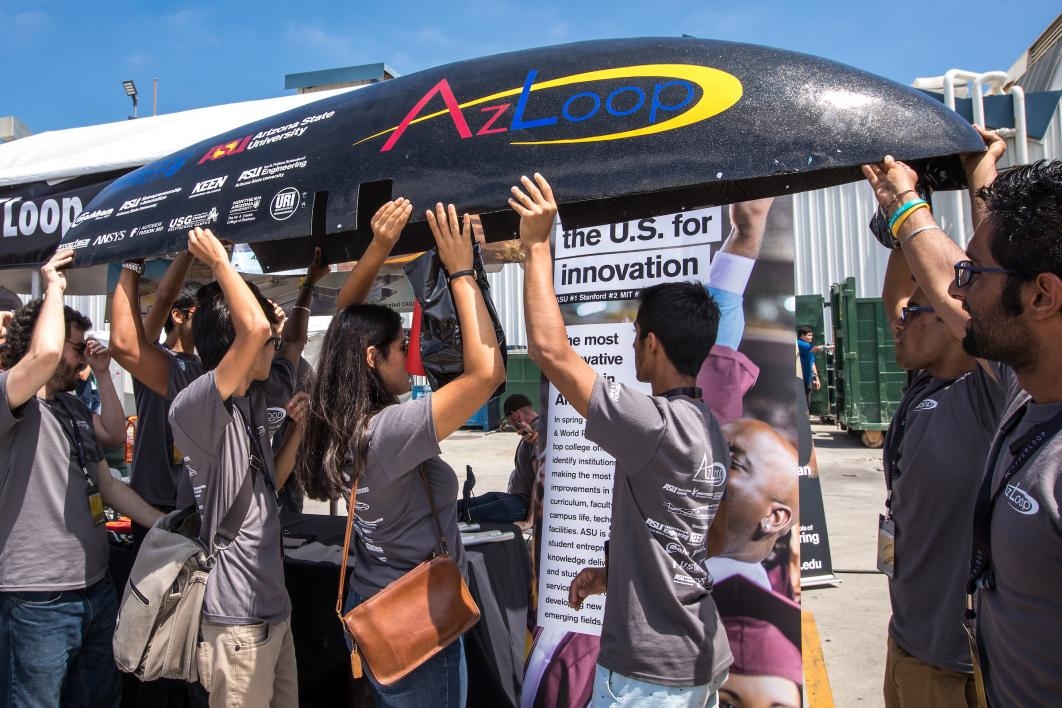 Members of the AZLoop team remove the front shell at their booth at the SpaceX competition.

AZLoop team members pose with the pod for a group photo during the final round of the SpaceX competition Sunday in California.

“What I got out of it was a lot of experience and team building,” Lam said. “I’ve never worked at this level before.”

A self-described introvert, Lam said he shines in the lab with the team: “It’s the best experience in my life.”

“We have the facilities, we have the pod, we have an amazing team, we have the support of the administration and of Arizona, so we’re really looking forward to being able to pick up again in September for competition 3 and doing this all over again and being one of the teams in the tube next year,” Nethken said.

Bugs were to be expected in testing and competing with a completely new form of technology, Nethken said.

“It’s the fifth mode of transportation, and it’s coming in the future,” she said. “That’s what we’re all doing here. We’re designing this new mode. Hopefully in 10 to 15 years we’ll see a full-scale existence of it, especially in Arizona. ... It’s pretty amazing. Not many students get to work on a new mode of transportation.”

Brendan Trang, an ASU senior in mechanical engineering, said he has never felt more inspired in his life. Being on the SpaceX campus, with rockets and pods on display and Teslas parked everywhere, planes roaring overhead out of the airport, was engineering heaven for Trang.

“I love it,” he said. “I’ve never been more excited about anything in my life. They say your happiest moment is when you get to college. This is it, right here. I’m sad we’re not able to run, but I’m excited to be here and be around these people. I’m excited to see Elon (Musk), if he ever comes out. That’s going to be the best day ever.”

Trang got his wish. Musk made a brief appearance late in the day. Trang had earned his day in the sun. He had stayed up for almost five days in a row, putting components on the chassis after it arrived.

“Honestly the toughest part was trying to stay awake just to get everything done,” he said. “When it finally got sent off, I was so relieved.”

The event was a cross between a street fair — with Ping-Pong and foosball tables, a disc jockey, food trucks and free Hawaiian ice — and an engineering convention, with booths, virtual reality and young engineers discussing actuators, magnets and propulsion.

Andrea Whitsett has been named interim director of Morrison Institute for Public Policy, filling the top position vacated by Thom Reilly to become chancellor of the Nevada System of Higher Education.“We were fortunate to have Andrea as the associate director and in place to assume the No. 1 leadership role at Morrison Institute,” said Jonathan Koppell, dean of the Arizona State University Coll...

Andrea Whitsett has been named interim director of Morrison Institute for Public Policy, filling the top position vacated by Thom Reilly to become chancellor of the Nevada System of Higher Education.

“We were fortunate to have Andrea as the associate director and in place to assume the No. 1 leadership role at Morrison Institute,” said Jonathan Koppell, dean of the Arizona State University College of Public Service and Community Solutions. “In her prior role, Andrea has proven to be a strong representative of ASU to the public and an innovative manager in daily operations.” 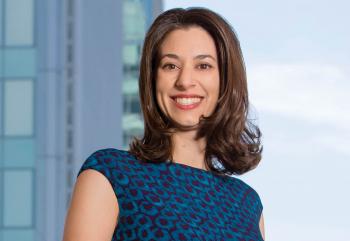 Whitsett, who joined Morrison Institute in 2007, also previously served as a management research analyst senior and a special projects manager. Her appointment as interim director is effective immediately until a permanent director is named following a national search, Koppell said.

“I am excited about the team we have built at Morrison Institute and I look forward to continuing the research advancements and community connections we’ve made over the years under previous directors Thom Reilly, Sue Clark-Johnson and Rob Melnick,” Whitsett said. “We’ve formed strong partnerships with community leaders to examine and address the myriad of dynamic issues facing Arizona — including education, the economy, water, changing demographics, criminal justice reform, social policies, and governance and elections.”

Morrison Institute is commemorating its 35th year as Arizona’s premier think tank for public policy. Its motto of “policy, not politics” is a mantra for nonpartisan research, analysis and public outreach. The Arizona Capitol Times named Morrison Institute as one of its 2016 Leaders of the Year in Public Policy, recognized for its contributions to education.

“Morrison Institute cuts through the noise by synthesizing data in a way that makes it more accessible and actionable,” Koppell said. “You can see that in the way this information is used by policy makers, community leaders and the public.”

In addition to its general policy operations, Morrison Institute features two centers — the Kyl Center for Water Policy and the Latino Public Policy Center. Morrison Institute also oversees the Arizona Legislative Academy, which was launched this year to provide new lawmakers with a stronger base of knowledge about Arizona governance and policy.

“We have a team of directors and analysts who are also communicators,” Whitsett said. “We are able to translate information to build bridges of shared knowledge. Morrison Institute also draws strength from its advisory board, which represents many dedicated individuals and organizations committed to improving the quality of life for all Arizonans.”

Whitsett’s passion for service traces back to her grandmother, Julieta Saucedo Bencomo, a community activist who in 1979 became the first Latina to serve on the Arizona State Board of Education.

Whitsett is a member of the Arizona Hispanic Chamber of Commerce’s DATOS Research Committee and has co-edited multiple background reports for Arizona Town Hall. Whitsett previously served on the board of directors for the Arizona Center for Afterschool Excellence and as board secretary for Florence Crittenton.

During her tenure at Morrison Institute, Whitsett has guided the publication of numerous policy briefs, as well as the Arizona Directions statewide report card. She leads Morrison Institute’s annual signature event, State of Our State Conference, and helped launch the pilot Arizona Citizens’ Initiative Review.

She holds a Bachelor of Arts in American Studies from Yale University, where she was awarded an Amy Rossborough Fellowship through the Yale Women’s Center. She graduated from Arizona State University with a master’s degree in nonprofit studies and has taught as a faculty associate in ASU’s School of Community Resources and Development.

“There is a reason why Nevada leaders sought out Thom Reilly. He is a proven leader who helped elevate the important research of Morrison Institute and will bring energy and vision to Nevada, just as he did to ASU,” Koppell said.